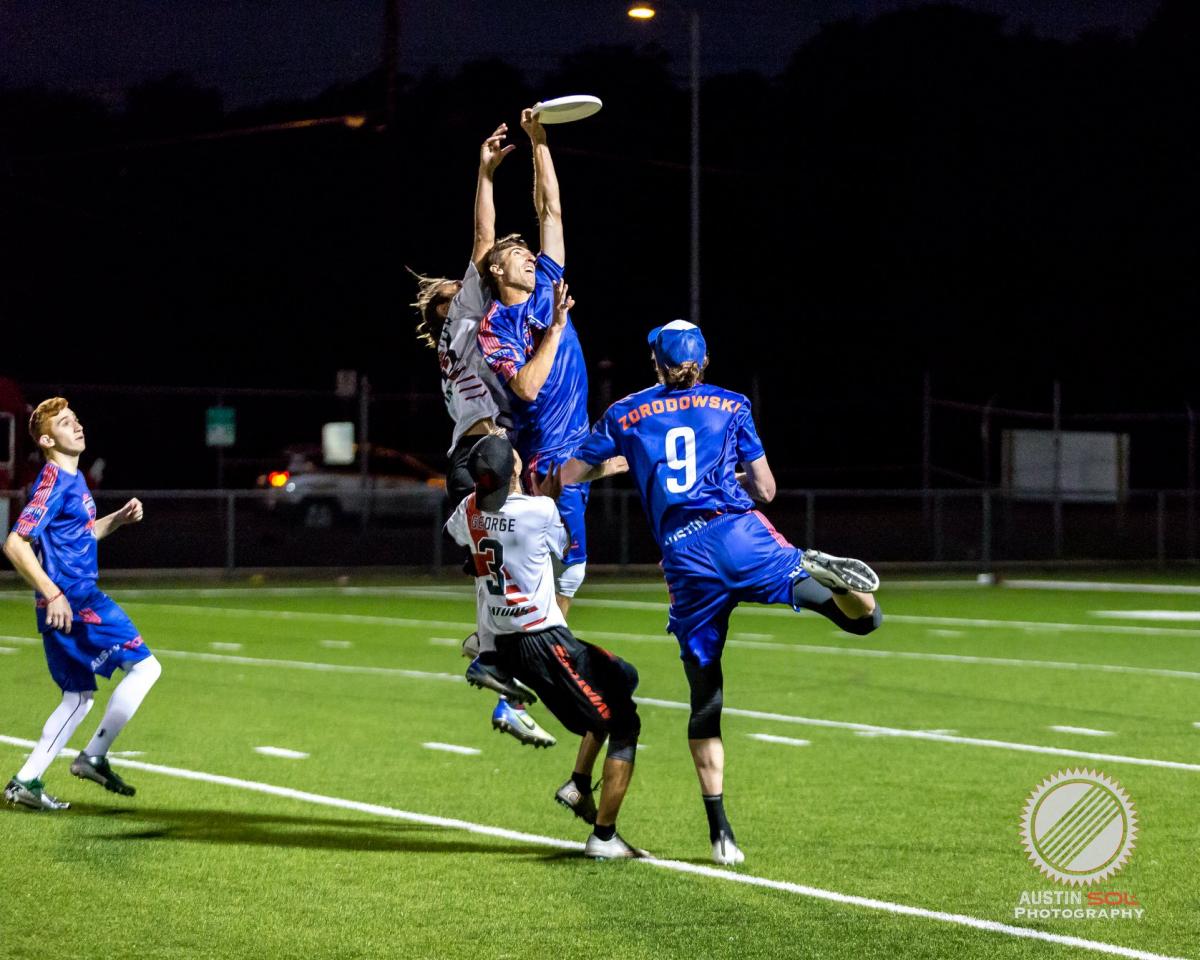 All broadcasts will be made available on the AUDL Facebook page. 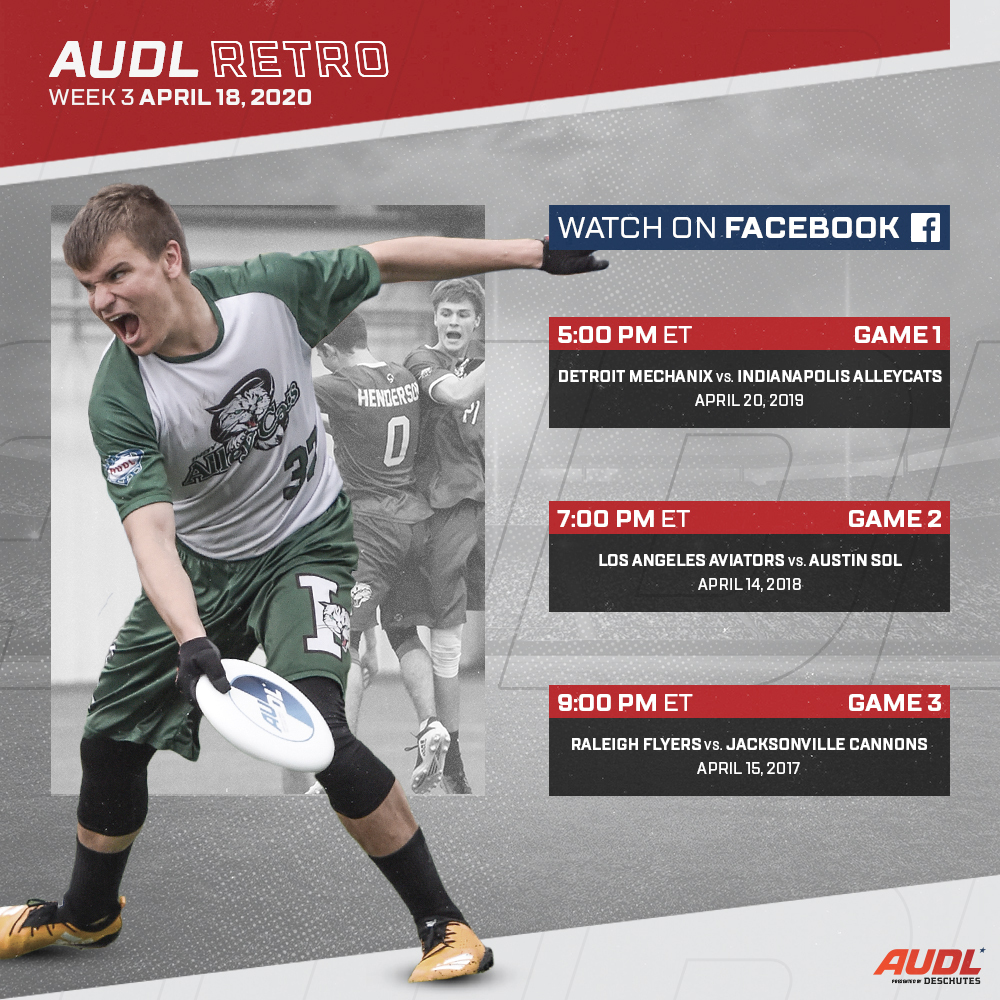 If you’ve never watched the Detroit Mechanix play before, this game will give you a glimpse into the struggling franchise’s legit future potential. Despite entering their 2019 season opener riding a 26-game losing streak, Detroit hung tough with the Indianapolis AlleyCats in Indy as the two teams tussled a high-scoring indoor shootout, with the Mechanix easily covering the 9.5 goal betting line on AUDLPicks.com. Mark Whitton and Andrew Sjogren, who were 22 and 23 years old, respectively, each scored eight goals to lead the Mechanix, while two other youngsters, David Innis, 22, and future AUDL All-Star Joe Cubitt, 21, combined for 119 completions. Indianapolis entered this matchup 0-1 after a two-goal loss to Madison the previous weekend, but the AlleyCats’ staples stepped up when necessary down the stretch, as Keegan North, Rick Gross, and Levi Jacobs all helped carry the Cats at certain points in the contest. Another reason to watch this matchup: it features the AUDL’s all-time leading goal scorer, Cameron Brock, and all-time leading assist-man, Keenan Plew, two of the league’s legends who continue to produce despite roughly a gazillion miles on their collective odometers. As a side note, Brock, Plew, and Travis Carpenter are currently one, two, and three in league history in the number of points played, totaling over 7,000 points combined throughout their eight-year careers (and counting).

Without a doubt, this Los Angeles Aviators vs Austin Sol clash was one of the most thrilling experiences our Game of the Week crew has enjoyed in my six seasons of covering the AUDL. All the pieces fell into place for an early-season masterpiece, with two proud franchises embarking upon interdivisional competition for the very first time. Furthermore, each organization had arguably its strongest roster ever, a claim bolstered by the fact that both of these teams ended up making the playoffs. It was a gorgeous night, the crowd was energized, and the playmaking was absolutely insane for the full 48 minutes. Brent George and Eli Friedman each authored unbelievable highlight-reel grabs for Los Angeles, while Jerrod Wolfe and Andrew Walch were particularly clutch for Austin. It certainly was not the cleanest ultimate game of all time—the Aviators recorded 18 blocks, with Jeff Silverman and Sean McDougall notching four apiece—but the drama crescendoed perfectly into one of the wildest finishes in the history of the league, with a 19-year-old kid who played in College Conferences earlier in the day becoming the unlikely hero in the epic final moments. While this game does conclude in spectacular suspenseful fashion, don’t let that overshadow the fact that, by and large, the entirety of the four quarters were phenomenally entertaining.

One year after the Dallas Roughnecks dominated the South Division, Raleigh and Jacksonville both proved to be worthy adversaries to the defending champs in 2017. On back-to-back days in May, the Roughnecks’ franchise perfection (23-0) was foiled, first by the Cannons and then by the Flyers, an indication of how much tighter this Division would become throughout the year. Meanwhile, this Week 3 showdown in Florida, about a month prior to those victories over Dallas, featured a shorthanded Flyers squad that was missing several of its stars, but also illustrated how Raleigh had insane reserves of depth to call upon for this difficult road trip. One Flyer worth keeping an eye on is Liam Searles Bohs, an 18-year-old high school senior at the time of this game, who went 15-for-15 passing with two assists, one goal, and one block while mostly playing D-line in one of the seven AUDL games he played that year. Nate Goff, then a 22-year-old senior at the University of South Carolina, also represented himself quite well in just his fourth game as a Flyer, recording three blocks that night against Jacksonville, illustrating in flashes the potential that would make him a USA National Team member in 2020. As for the Cannons, they entered this April action an impressive 1-0 after erupting for 40 goals in Week 1 against Nashville, with former Roughneck-now-Thunderbird Jeremy Langdon coming off a booming +16 performance in the opener. Jacksonville also featured Mischa Freystaetter, Bobby Ley, and Andrew McKelvey, all three of whom, coincidentally, went on to join the Flyers franchise in future years.