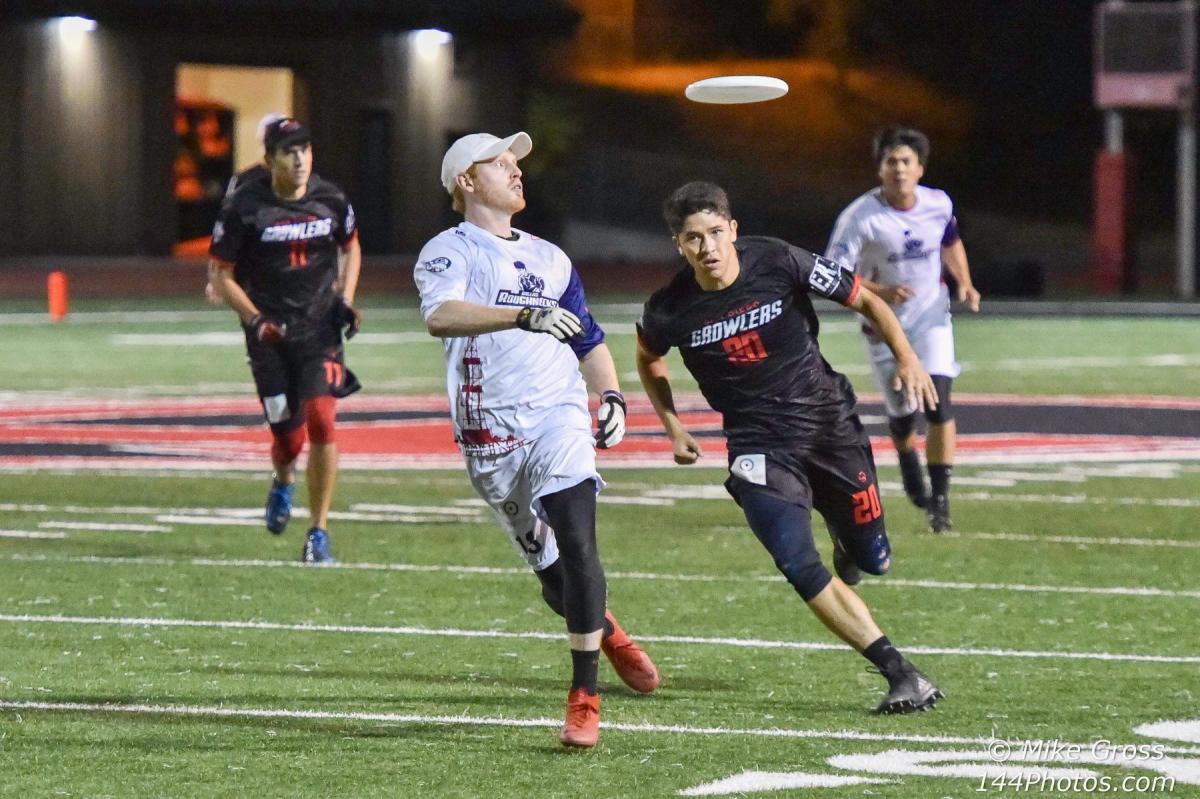 The 2020 AUDL Game of the Week schedule is set, and the lineup is absolutely stacked with juicy matchups. So without much ado, let's get into quick previews of what will make each game worth watching.

The DC Breeze and Raleigh Flyers have squared off twice before in the AUDL Game of the Week—once in 2017 and again in 2018—and produced instant classics jammed with highlights. Both franchises are perennial playoff contenders with MVP caliber talent, but neither has quite reached their potential the past few seasons. With the Breeze's new arrival to the division, this matchup could be a preview of the Atlantic Division title game in July, and the start of a grudge match.

The San Diego Growlers had the number two scoring offense in the AUDL last year, but the Dallas Roughnecks defense proved too much, generating 18 blocks in a convincing 23-18 win in the 2019 AUDL semifinals. Now divisional opponents in the West, the Growlers are trying to make their second straight Championship Weekend appearance, while the reloaded Roughnecks have their sights locked on their first AUDL title since 2016; Dallas has played in the AUDL championship game three out of the last four seasons.

Maybe the most intriguing individual matchup in the 2020 Game of the Week slate, the Minnesota Wind Chill will travel up to Winnipeg to host a highly anticipated regular season game against the Montreal Royal. It's a first-ever meeting for these two franchises, and both teams love to huck. The out-of-division matchup adds an especially dramatic wrinkle, as both teams missed the playoffs last year and will be in the thick of their respective divisional playoff races; neither team can afford any additional losses.

It's a very quick rematch for these two teams following their opening weekend battle, but with both Raleigh and DC possessing top tier offenses who move quickly and efficiently, expect another high-scoring, entertaining shootout. Each team had two players nominated to the All-AUDL Rookie Team in 2019—Henry Fisher and Eric Taylor for Raleigh, AJ Merriman and Garrett Braun for DC—and each roster is brimming with young talent, granting a glimpse into the future of ultimate.

A lot has changed since the Roughnecks took down the Seattle Cascades in their first and only meeting in the 2016 AUDL Championship Game. Dallas has continued to thrive as a perennial championship contender, while Seattle has stumbled in recent years. But with the most dangerous offensive player in league history coming back in Mark Burton, the Cascades and their sixth ranked scoring offense stand a punchers chance in any matchup.

It took a Jeff Babbitt flying block and a Beau Kittredge walk-off rundown for the New York Empire to take down the Raleigh Flyers in double overtime in Week 12 of last season and stay undefeated on their way to the title. Poetically enough, former Flyer Jack Williams delivered the game-winning huck assist for the Empire in 2019, a fitting opening chapter to a championship-caliber interdivisional rivalry.

A rubber match between the two best teams in the West, the winner of this game could take a commanding lead atop the division. Dallas struggled on the road last year but was undefeated at home; despite a lot of close finishes throughout the season, San Diego lost just one game at home in 2019. The fate of the division could come down to who has home field advantage in the playoffs.

Outside of New York, the Pittsburgh Thunderbirds were the hottest team in the league entering the 2019 playoffs, winning eight of their final nine games of the regular season behind a fantastic campaign from MVP runner-up Max Sheppard. Both Jagt and Sheppard have a tendency to put on a show in primetime—Jagt had a 15-score performance in the Week 12 Game of the Week, while Sheppard had a 14-score showing in Week 15.

The Breeze and Empire have had some of the most dramatic finishes in AUDL history, including last season's sudden death thriller in New York. They may be in different divisions for the first time, but this rivalry is still central to both franchises' narratives in 2020. The 2018 MVP Rowan McDonnell vs. 2019 MVP Jagt matchup has been a growing feud over the past few seasons, with each player getting the better of the other.

A classic Central Division rivalry since 2013, the winner of this season series has almost always moved on to the playoffs, while the loser remained at home. The Chicago Wildfire took two out of three last year from the Wind Chill to qualify for the postseason for the first time since 2015, ending Minnesota's three-year postseason appearance streak. But former Wildfire standout Matt Rehder signed with Minnesota during the offseason, swinging the momentum back in the Wind Chill's favor; Rehder poured in a season-high 11 goals against the Wind Chill in Week 9 of last season.

Usually all-star events are half-hearted affairs, but that was not the case for the inaugural showcase in 2019 that went to double overtime. Max Sheppard took home MVP honors for the game, but numerous stars showed their talent for both Team Rowan and Team KPS in one of the better individual games from last season. From the captain's draft antics to the on the field performance, the 2020 AUDL All-Star Game will have some large expectations to fulfill.

Since 2012, the East Division has owned the Central Division, winning all six matchups including three at Championship Weekend. The Toronto Rush have never played the Indianapolis AlleyCats, but both teams employ similar offensive and defensive strategies based around possession and controlling the opponent's tempo. Both franchises finished in the league's top five in goals allowed per game last season, and defense will largely determine if the AlleyCats can finally break the East's streak.

The Philadelphia Phoenix haven't appeared in a Game of the Week broadcast since 2013, coincidentally the same year the franchise last qualified for the playoffs. Philly was one of the youngest teams in the league in 2019, and seem to have a lot of playoff potential heading into 2020. But that may be a moot point if Boston's talent can match their expectations; the Glory have a decent shot of becoming the fifth expansion franchise to reach the championship game in their inaugural season.

Boston-New York is the quintessential American sports rivalry matchup, and the AUDL version already carries a boatload of hype entering their first matchup. The reigning champion New York Empire are looking to extend their undefeated streak into the 2020 season, while the Boston Glory are looking to make their first statement win as a franchise by taking down the crown. The Empire are returning their core of stars led by 2019 MVP Ben Jagt, but the Boston roster shows a team capable of challenging the champs.

In 2019 the AlleyCats finally got the monkey off their collective backs and achieved two franchise firsts against the Madison Radicals: They won a game in Madison, and they claimed their first season series against the Radicals. Madison suffered an unprecedented three regular season losses at home to divisional opponents in 2019; the Radicals had just one in the prior six seasons. Indy won the division last year with little margin for error, and the Radicals are looking to reascend the divisional throne in 2020 with a young roster once again built around a top-tier defense.

This regular season finale will likely determine the two seed in the Atlantic Division and a probable matchup with the Flyers in the playoffs. The Breeze and the Atlanta Hustle had the third and seventh most efficient offenses in the league last year, respectively. Both have historically done well against the presumed frontrunners from Raleigh, but neither the DC nor Atlanta franchise has qualified for Championship Weekend.