Disc In: A Chat with Tristan Yarter | AUDL
Skip to main content 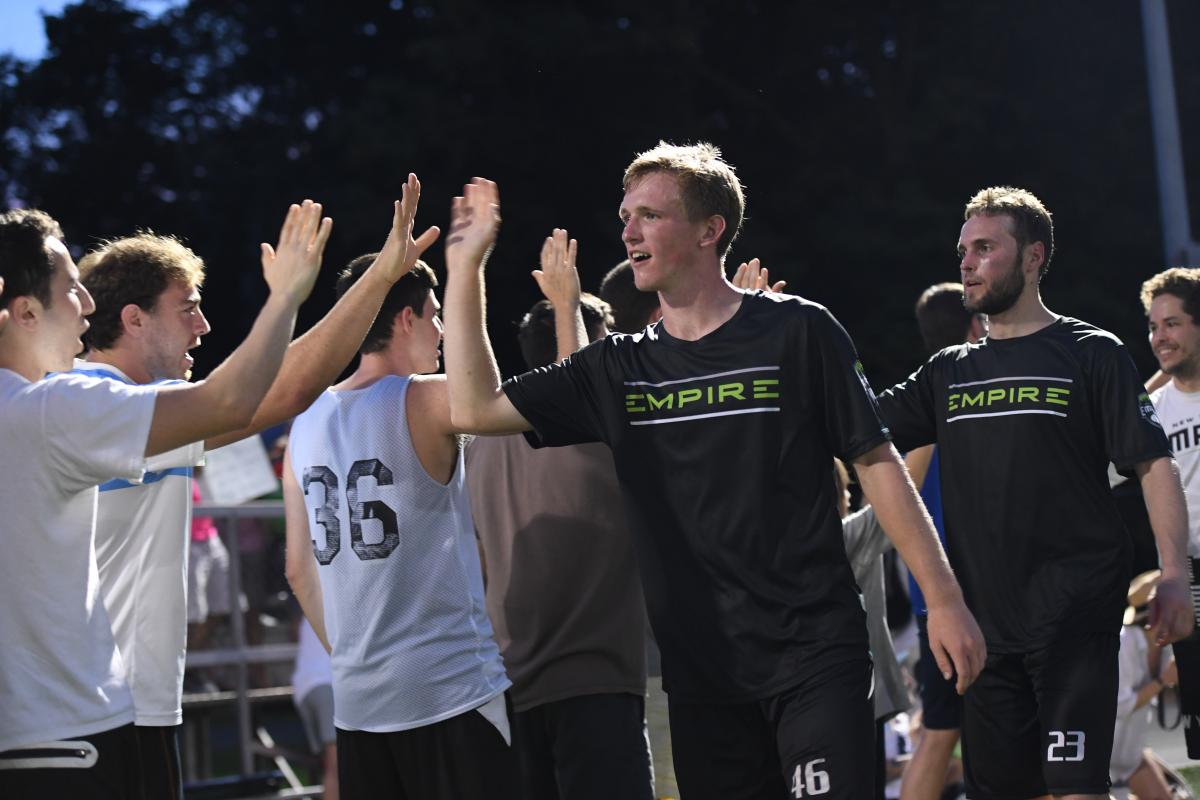 Ever since the AUDL launched its first pull on April 14, 2012, the top teenagers in the sport have frequently proven that they belonged on the professional field. League bylaws mandate that all players must be 18, and several youthful studs that earned their way onto a roster eight years ago, like Indy’s Travis Carpenter and Montreal’s Kevin Quinlan, have evolved into franchise cornerstones today. Meanwhile, the current wave of 18-year-olds were just 10 or 11 when pro ultimate began, yet the explosion of youth ultimate over the past decade means that the new recruits often possess more polish, precision, and poise than many of the veterans they now find themselves alongside. One has even become an AUDL champion already.

We begin this next series of Q&As, focused on the AUDL’s next generation, with a kid who became eligible for competition just a week before the New York Empire’s 2019 season commenced. And just four months after that, in the fourth quarter of the AUDL championship game, Tristan Yarter had the disc in his hands with the title still very much hanging in the balance. His backhand reset with just under six minutes remaining led to Marques Brownlee’s spectacular bid, and two throws later the Empire converted a defining break to increase their lead to three, an iconic sequence that helped cap New York’s perfect season.

Leave it to Beau Kittredge, who became an AUDL champion for the fifth time this past August, to characterize the sequence, which he did in a Facebook post after the game.

“Props to the teen for throwing a dump throw we worked on throwing all year whether MKBHD was ready for it or not,” wrote Kittredge, praising Yarter’s only toss of the game. “That’s called an educational throw. Way to stick to our flow, Tristan.”

Later that month, of course, Yarter began his freshman year of college at the University of Pittsburgh, primed to join one of the top collegiate ultimate programs in the country. This past January, USA Ultimate announced that Yarter had made the Junior National Team ahead of the World Junior Ultimate Championships that were originally supposed to take place this July in Sweden. Unfortunately, like most everything else in the sports world this spring, Yarter’s freshman season and upcoming international experience got wiped out by the pandemic. Consequently, he’s back home in New Jersey, wondering when he’ll be able to play ultimate again.

A few days ago, I caught up with Yarter, who celebrated his 19th birthday two weeks ago, to discuss the present, past, and future. The conversation has been edited slightly for clarity.

Tristan Yarter: I’m doing alright. Definitely bummed to be stuck inside all day and not playing ultimate, but I'm trying to make the best of it. I'm at home in the birthplace of ultimate, Maplewood, New Jersey. Life here has been pretty quiet. I'll see neighbors playing with their kids sometimes, but that's about the most I see of people I don't live with. The area has obviously been hit pretty hard so everyone's doing their best to stay inside.

EL: Presuming you've shifted to experiencing your freshman year of college remotely, how would you characterize how that has gone so far? What's the typical day like and how jarring has it been to make the transition from on-campus student to what you're doing now?

TY: The switch to online classes went better than I thought it would. Most of my classes have just been assigning weekly work instead of meeting on zoom so my schedule has been pretty flexible. My day-to-day usually consists of sleeping in, doing whatever class work I need to do, getting a workout in, and watching a lot of Netflix.

EL: Ultimate obviously feels somewhat secondary to everything, but I'm definitely curious to ask how your college ultimate experience had gone thus far and what the emotions have been like handling the realization that this season almost certainly won't reach its conclusion?

TY: So far my college ultimate experience has been amazing. From the moment I stepped on campus [at Pittsburgh] this fall I felt welcomed, and we've put a lot of work into building an accepting and loving community. Pitt was having a strong season before this all happened, so it obviously came as a shock when it was cut so short. We actually got the news that classes were cancelled for the rest of the semester the day before we left spring break, which made for emotional last night and transition to isolated living. I was also set to play at [Junior] Worlds this summer with he U20 national team, so Worlds being cancelled built on the tough transition as well.

TL: Before going further, can you enlighten me about your overall athletic background and explain how you got your start playing ultimate?

TY: I always loved sports growing up, I was actually a black belt in Taekwondo before I started to focus on ultimate. I was also a hockey player for several years; my father played in college and we'd always go to Rangers games together. I started playing ultimate at a local summer camp (which I now teach at) in middle school after some neighborhood friends who played taught me how to throw and encouraged me to join. Funny enough, I now compete against the friend who introduced me to ultimate in the college division—shoutout Kalman [Carmel] on Rutgers!. I actually didn't keep playing after camp originally because I got a concussion halfway through. After I went back the next summer I joined the middle school league in my hometown, which was run by my high school and college teammate Harry's mother, Sarah, and the rest is history.

EL: It sure has become more and more common for 18-year-old high school seniors to make an impact on professional ultimate teams, but I still think it's noteworthy every time it occurs. What are your primary memories from trying out for the Empire in high school and then learning that you made the team? Were you confident or did you surprise yourself through the process?

TY: I was definitely a little nervous coming into tryouts, I wasn't quite sure what to expect. I had played club with a few members of the team the summer before so there were a lot of familiar faces. But once I started playing I think I kind of just blacked out and forgot the nerves. That being said, I was very aware of when decisions were being made and kept a close eye on my email. A fun memory from tryouts was the first day Jack Williams joined the team, I decided I was going to cover him every chance I could. Obviously I wasn't expecting much from this, but I actually managed to get a D on him on a bad throw. 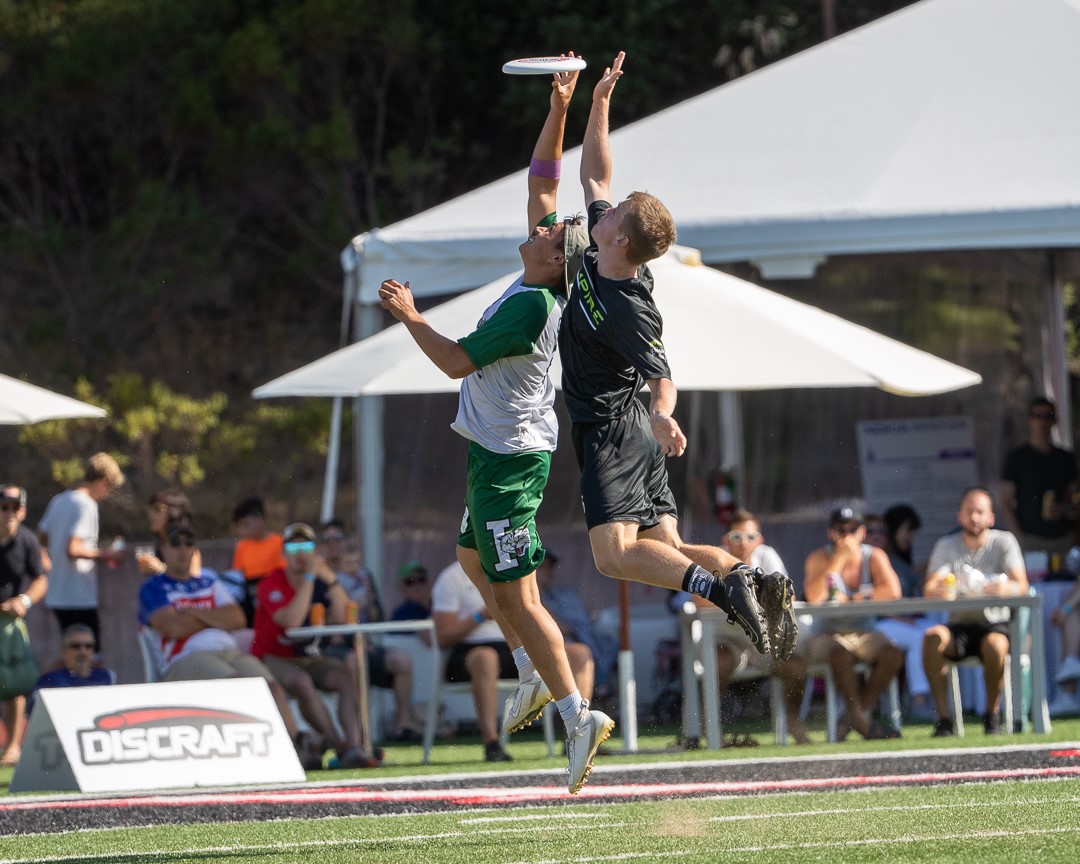 EL: You made your AUDL debut for the Empire on May 25, 2019 against Ottawa; were you nervous going into that game? Any memories from that day you're especially proud of or humbling "Welcome to the AUDL" moments that stand out?

TY: I wasn't really nervous going into the game because I knew practicing against our offense every week prepared me for pretty much any matchup I'd see. I actually had a great "Welcome to the league" moment: it was Sam Feder's debut as well and on both of our first points I threw an assist to him. It was also high school states that weekend, so the next day I got to go play my last tournament with Columbia! Fun times! 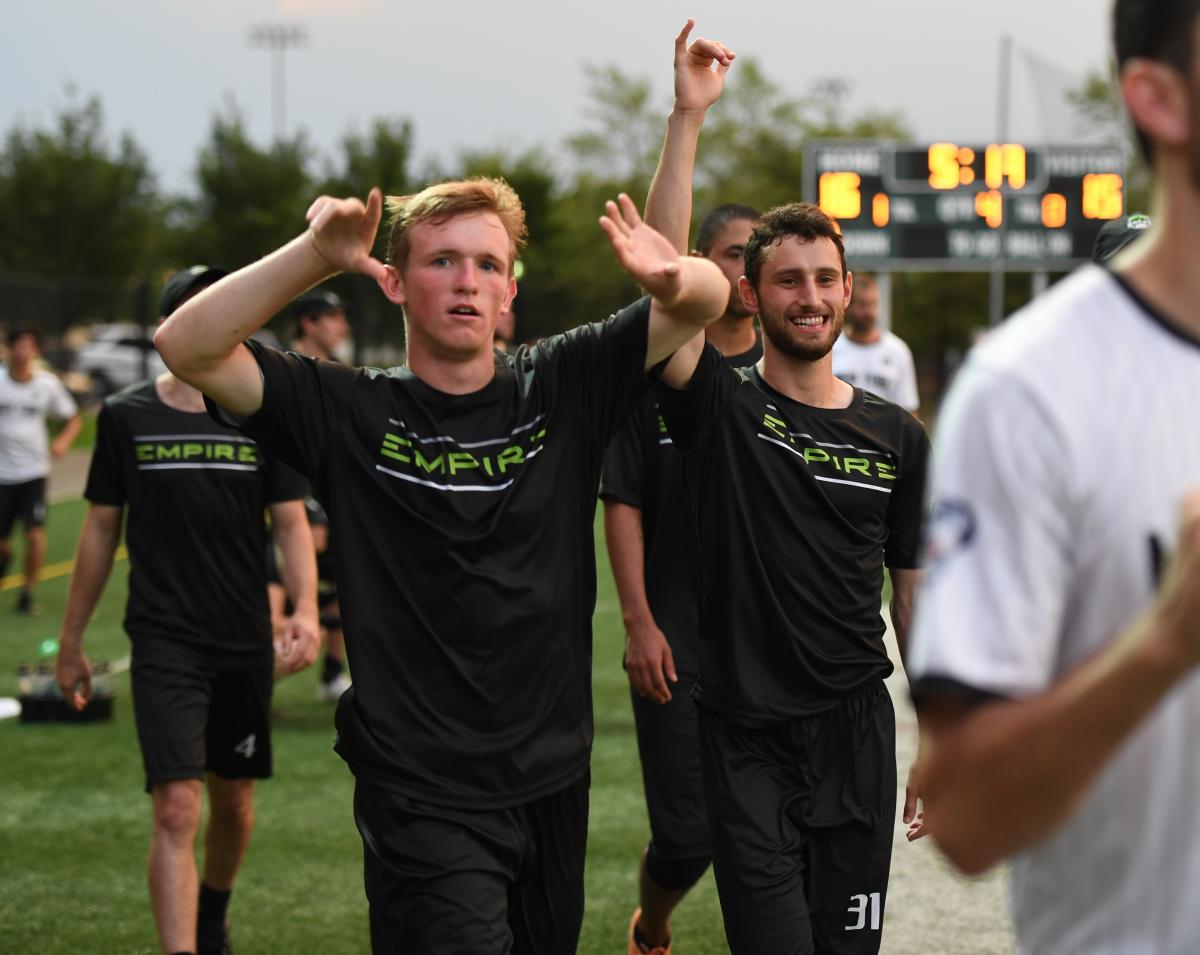 EL: Obviously, the Empire enjoyed a special season, and I'm curious what it was like for you to experience Championship Weekend with this team as an 18-year-old? Any stories or moments from the weekend that you'd care to share that were particularly amusing or meaningful?

TY: Overall, Championship Weekend was a blast. The league put together a great venue and made it a great experience for players and fans. Besides winning, obviously, we had a really fun pool party back at our hotel after the championship. Without hesitation, Bryan Jones jumps in the pool fully clothed... I don't even know if he took his shoe off. I also love the picture of Beau with the huge check in front of the pool; I'll keep everyone guessing about how much he was wearing behind it. 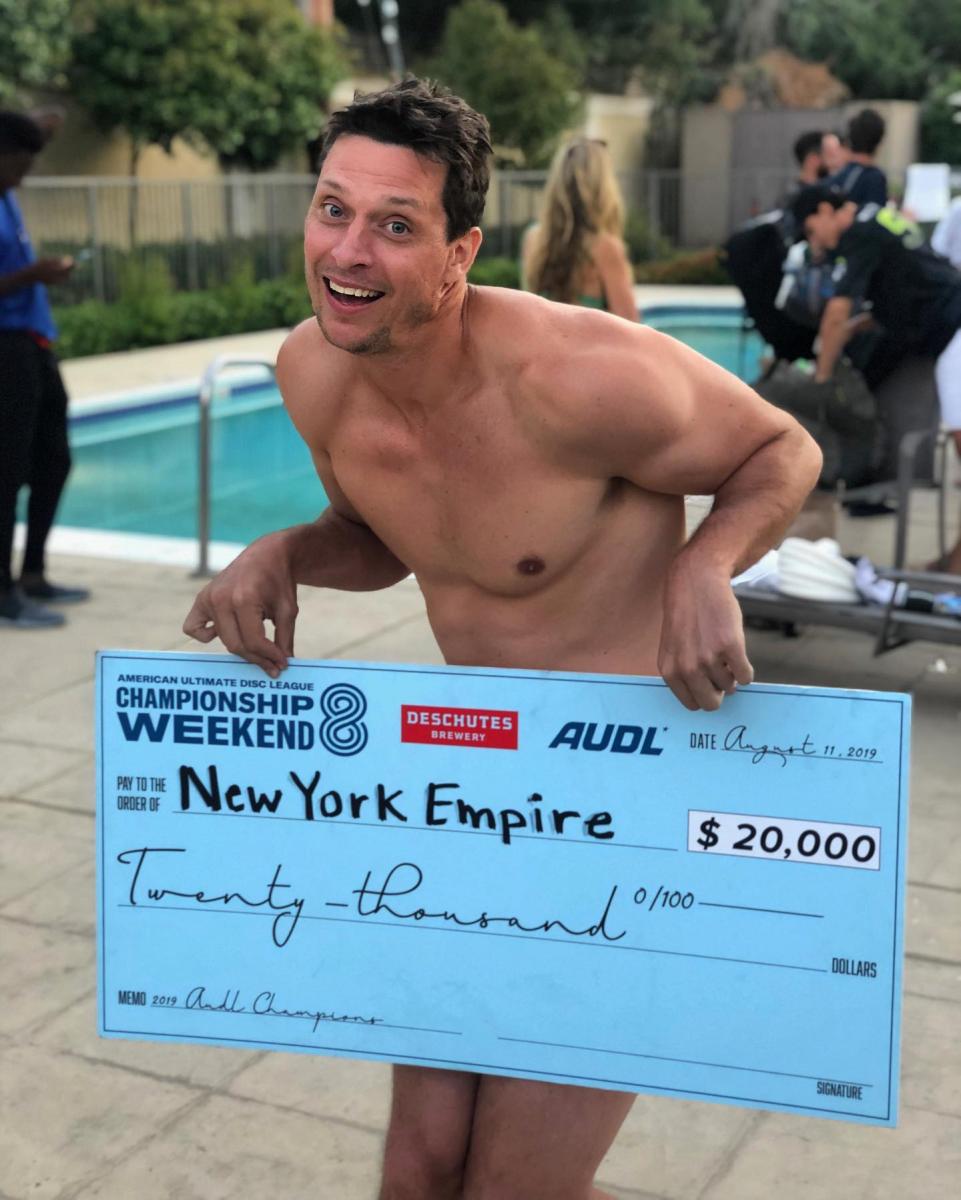 EL: Gotta ask: when you released that reset toward Marques in the fourth quarter of the finals, what was your immediate thought? Did you think he would catch it? What was going through your mind during that sequence as you ultimately helped the Empire D-line secure a critical break that helped put the game away (and has since been considered an "Iconic Moment" in AUDL history)?

TY: Out of the hand I didn't realize how windy it was, so when I saw the disc sinking i thought "oh crap he might not catch that." I never totally thought he wouldn't catch it because I've seen Marques make plays like the one he did before, but for a split second I was worried.

TY: I’m in school to become a physical therapist and I'm a bit of a heath nut, so i'm always intrigued to find out more about how the body works and how to train/rehab it. I'm still just starting the program so i'm covering the basics, but I always pay close attention whenever an expert is talking. I was actually hoping to get in some of my shadowing hours with the Empire trainers at Matchfit Performance this summer, but now that's been put on the back burner.

TY: Tiger King! If you haven't seen it yet, you must be living under a rock or not have Netflix. It's great. I also love Star Wars so I've been watching Star Wars: The Clone Wars. 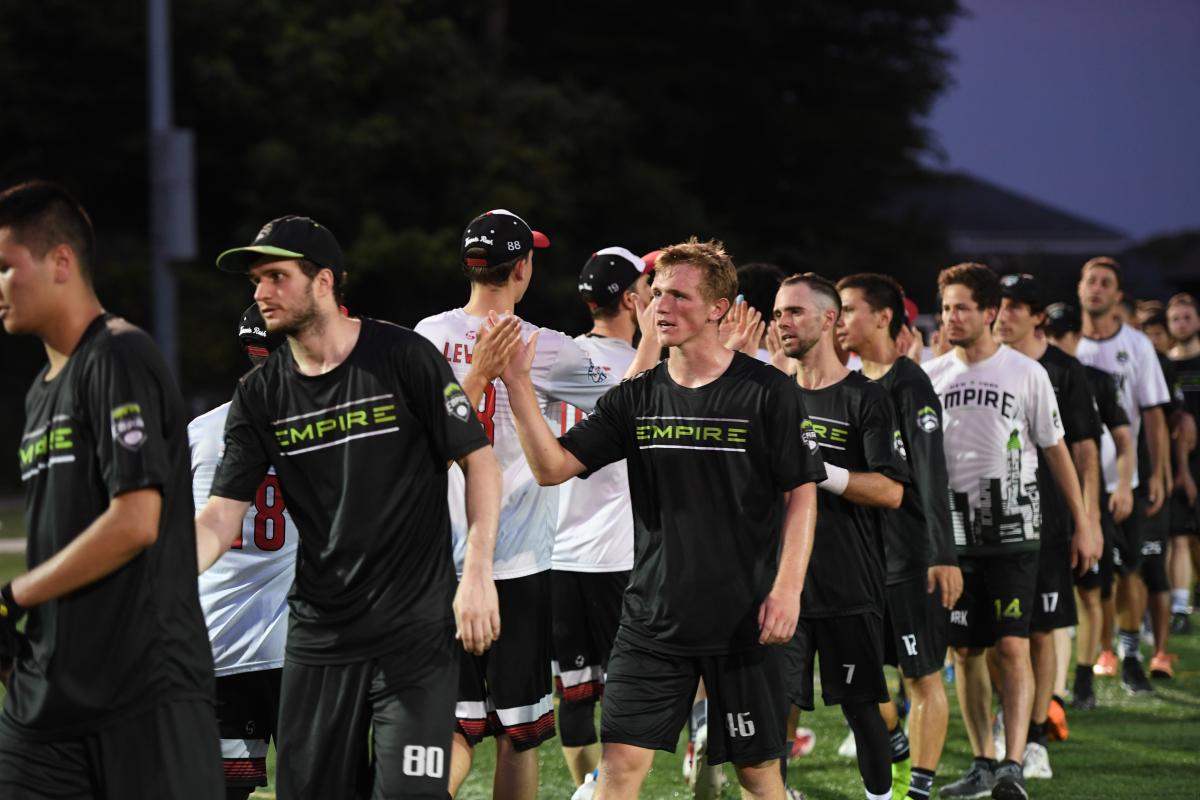