Disc In: A Chat with Steven Milardovich | AUDL
Skip to main content 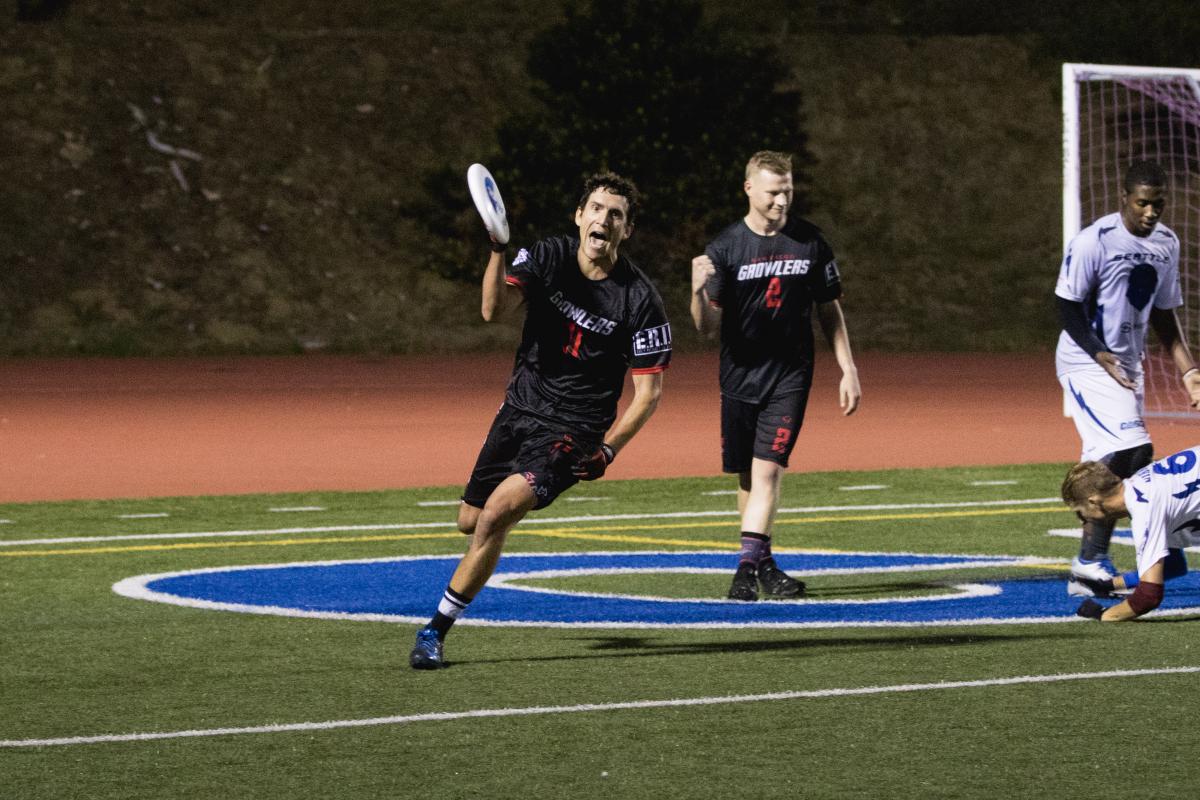 As we wrap up another two-week chapter of the Disc In Q&A series, the shift to defense has taken us through New York (Jeff Babbitt and Mike Drost), the Midwest (Jimmy Kittlesen and Andrew Meshnick), and South (David Richardson). Meanwhile, does anyone even play D out West?

At least one guy does.

Obviously, I write in jest, as there have been plenty of thrilling moments based around defense out West since the division was formed in 2014. But perhaps it will surprise you to learn that of the 19 players in AUDL history with at least 100 blocks, only one has spent his entire career on the left coast. That individual is Steven Milardovich, who by any measure has been a premier shutdown defender since the San Diego Growlers joined the league in 2015. With 111 blocks in 63 career games, the 30-year-old San Diego State product has clearly separated himself on the defensive side of the disc in the West Division, with a notable flare for the dramatic that has repeatedly shown him to make clutch plays in important moments. 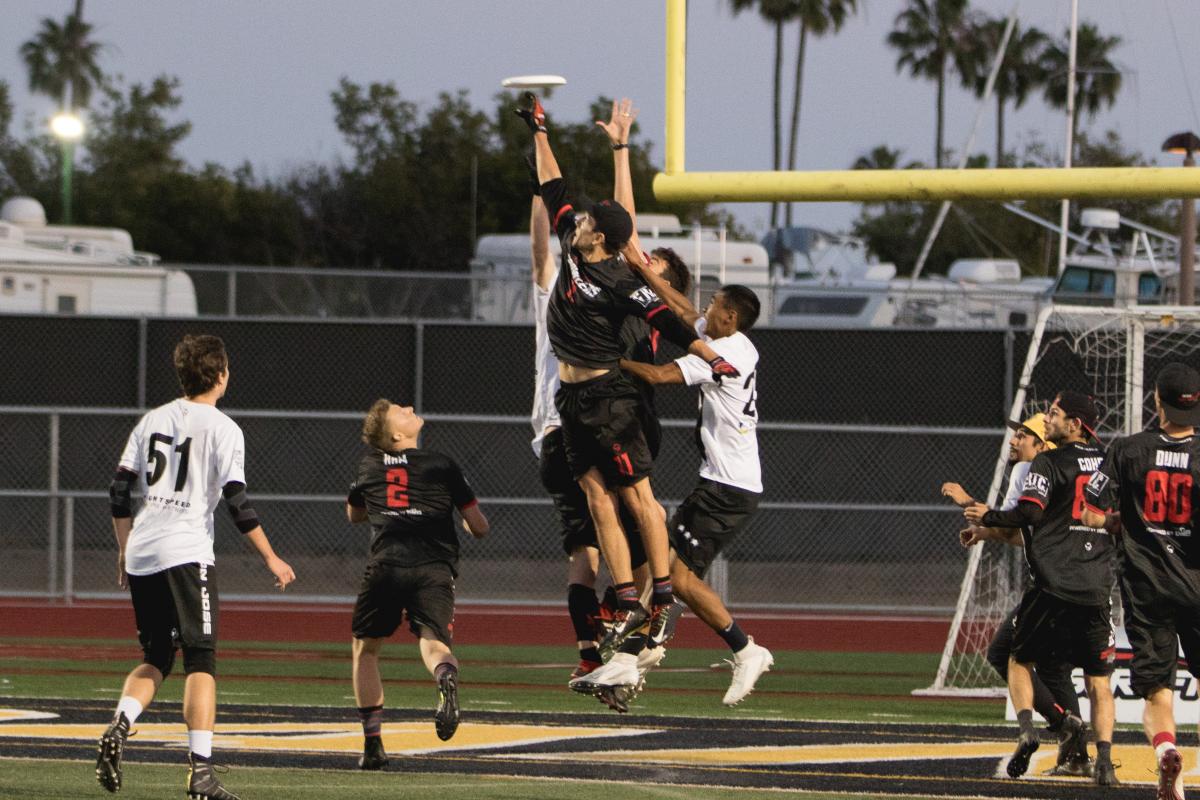 When he entered the AUDL as a 25-year-old, it did not take long for him to adjust to the professional game, as he produced immediately even while the Growlers franchise initially struggled to rack up victories. In his first two seasons, San Diego won only nine games, but Milardovich accumulated 51 blocks, accompanying that with 42 goals and 41 assists. Clearly, he was the type of cornerstone cog that San Diego wanted to build around, which they would continue to do over the next several seasons. In 2018, despite leading the team in blocks each of the previous three years, the versatile Milardovich actually slightly played more O-points than D-points. Of course, he still led San Diego in blocks while only playing defense just under half the time.

Over the course of his career, his consistency has been particularly impressive, with at least one block in 55 of his 63 games; that’s better than 87 percent of the time that he tallied a block when he was in the lineup. Additionally, from the quirky stat department: in each of his even year seasons—2016 and 2018—he was 25-for-25, registering at least one D in 100 percent of the 25 games he played during those two seasons. Considering how so many skeptics think that the AUDL is all about offense, that level of defensive steadiness is nuts, a tribute to the stellar half-decade he’s compiled overall. Furthermore, Milardovich registered multiple blocks in each of San Diego’s playoff games last year against Los Angeles and Dallas, perpetuating the claim that he’s got the clutch gene.

Beyond the numbers, Milardovich also earned San Diego’s nomination for the 2019 Integrity Award, which became an even bigger deal when his playing peers voted him worthy of the West Division’s Integrity Award. As teammate Goose Helton said last August, “It seems like once every couple of games [Milardovich] is somehow involved in an integrity call. His fair-mindedness is self-evident on the field, especially during the brief moments of player-to-player conversations. [Milardovich] simply wants the right call and outcome to prevail, even at the cost of personal gain. Values like that are really easy to admire in both teammates and opponents.” 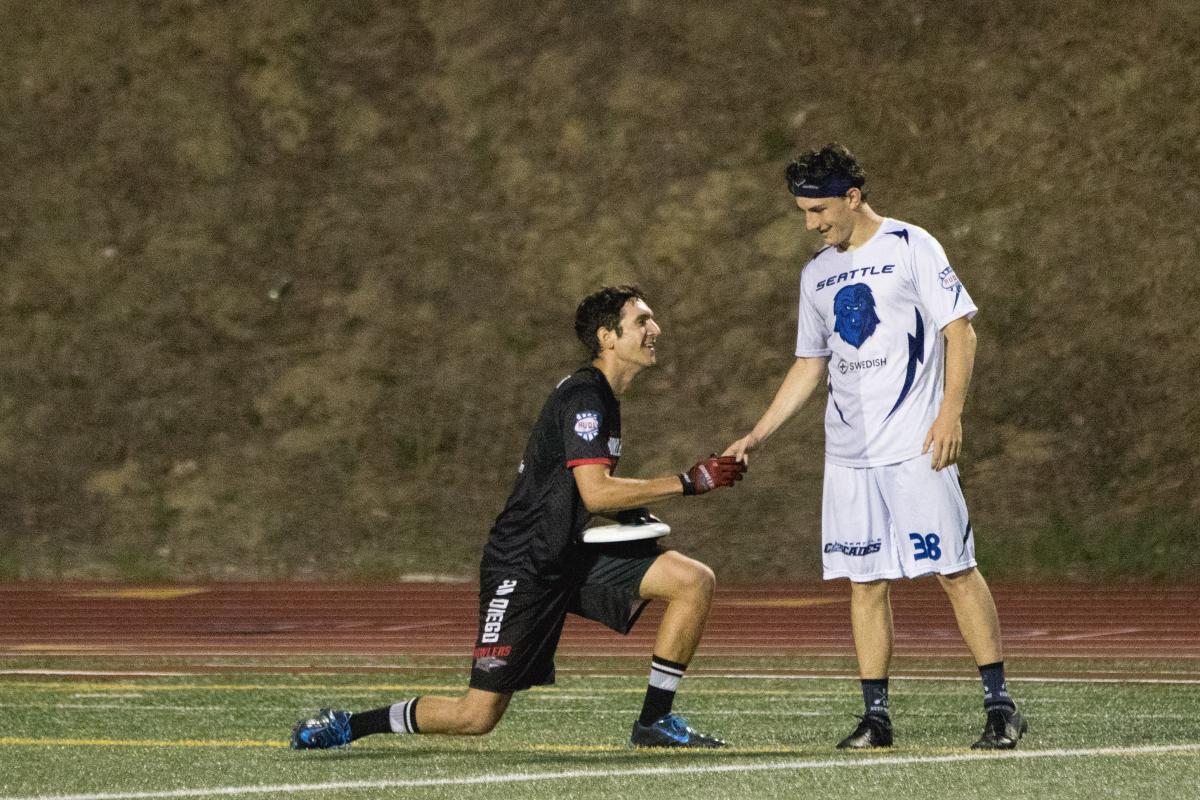 To cap the Q&A series with some of the league’s stingiest defenders, I was eager to connect with Milardovich earlier this week for an enlightening exchange about his individual evolution, his team’s gradual rise, and the toughest matchups he’s dealt with throughout his career. The conversation has been edited slightly for clarity.

Evan Lepler: Firstly, how are you and what has your everyday life been like over the course of the past couple of months?

Steven Milardovich: I am doing pretty well during this crazy time; I have a lot to be thankful for. My wife and I both still have our jobs, and we just bought a house back in January so we're grateful to have a comfortable home to be cooped up in. We also got a puppy a couple months ago so he keeps us occupied.

EL: From an ultimate standpoint, what types of things have you done to try and stay in shape during these bizarre times? If the season started tomorrow, what percentage of the best version of yourself would you estimate you'd be?

SM: I have been doing workouts in my garage and backyard, but the space is limited. I'm definitely not in full blown game shape, but I feel like if I got a few practices under my belt I would be right back on track.

EL: While everyone who steps on an ultimate field needs to throw, catch, and defend, your primary role with the Growlers, especially in the last few years, has certainly labeled you as a defender. When in your career do you think you first gained the distinction as a defender from your teammates and/or opponents on the field and how has that characterization impacted you as a player?

SM: I think I started to get categorized as a defender while I was playing at SDSU. We had a strong team and I was pretty raw so there was no chance I was cracking the O-line. Over the course of my first year I started to figure things out defensively, getting better in the air and getting some blocks. Going up against [future San Jose Spider] Jackson Stearns at practice was always my big challenge, and getting my butt kicked by him really helped me develop. I remember playing at Pres Day Invite in 2011 felt like a breakout for me; I got some big layout Ds and started to establish myself as a playmaker. 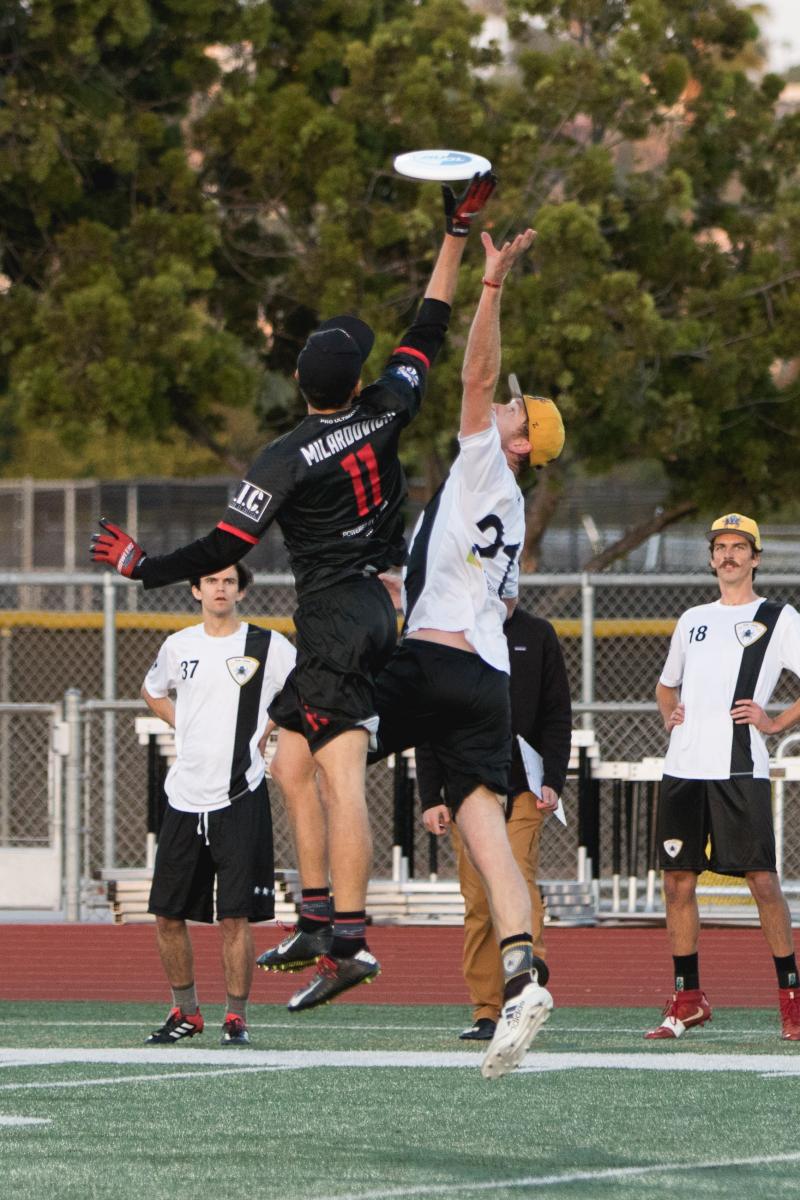 EL: Before going further, can you quickly share your narrative about what sports you played growing up, how you discovered ultimate, and how long it took you to begin feeling fairly confident on the ultimate field?

SM: My sports background is baseball, it was the only sport I played growing up and I played through high school. I found ultimate my sophomore year at SDSU. My best friend and roommate Kevin Cocks and I had a buddy named Tim Gilligan who played on the ultimate frisbee team. We asked him if we could come out to a practice and the rest is history

EL: Obviously your speed and athleticism are key factors in your ability to play defense and get blocks in the AUDL, but what are some of the little things that you focus on every day in order to have success playing defense at the professional level? How have you improved with these 'little things' through the years to become a better all-around player?

SM: I think playing angles and reading situations is critical in playing defense in the AUDL. You can try to play lockdown person defense but with the field size and the talented offenses it is an uphill battle. Making little adjustments on how you close out space, cutting off passing lanes, and playing smart team defense are really important. I have been fortunate to have great coaching and smart veterans around me throughout my career to develop these things, and it also takes lots of experience and reps to develop those instincts as well. 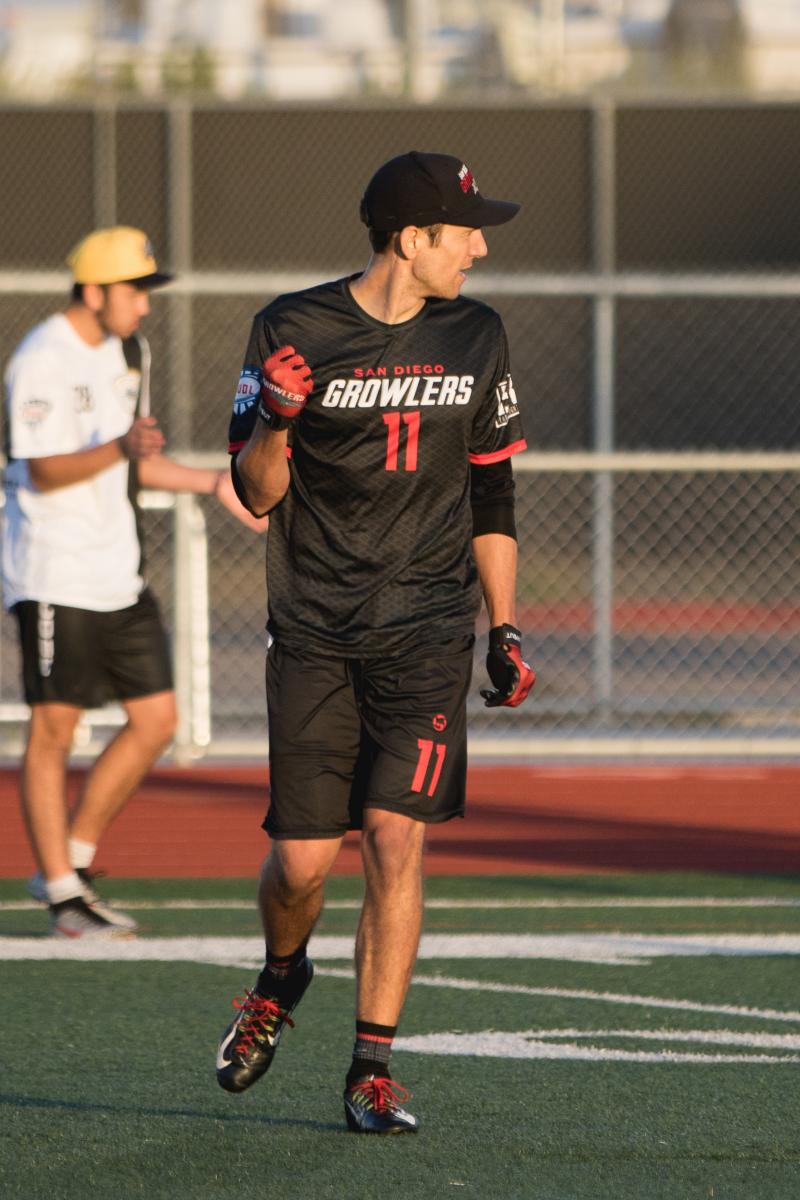 EL: If possible, I'd like to delve into your mindset as a defensive player over the course of a game. Do you prefer to guard the same person the entire game? What are your specific goals defensively, aside from the obvious 'let's prevent them from scoring?'

SM: I like to feel things out over the course of the game, start out with the matchups that we determine in our game plan and then see what is working and what isn't. I certainly don't mind guarding the same person all game, but smart offenses and talented players will make adjustments. It is important to have different looks to throw at your opponent and changing matchups can be one way to do that.

EL: If I'm remembering this correctly, I believe you shared how throughout your career you strived to set the tone as the top defensive player on whatever team you're on, and at some point in 2019 you felt that SScott Radlauer had kinda naturally passed you as the team's premier defender... Presuming I'm recalling this accurately, I'm curious to ask you to share your recollections about this realization and what he consistently did to make you feel this way? Furthermore, how did this acceptance and slight adjustment to your mindset impact the way you felt about your abilities and looked at your role on the team?

SM: I realized that Scott had taken that step as a defender at the first tryout last season. There had been some buzz about his play on Condors from the previous club season. We matched up in a head-to-head drill at tryouts, and I struggled to get any separation from him. The realization honestly didn't change my mindset much, it was mostly just exciting because I knew we were going have a strong D-line. My role is to do whatever the team needs me to do, and having a teammate like Scott just means that I don't need to guard the opponent’s best cutter as often. 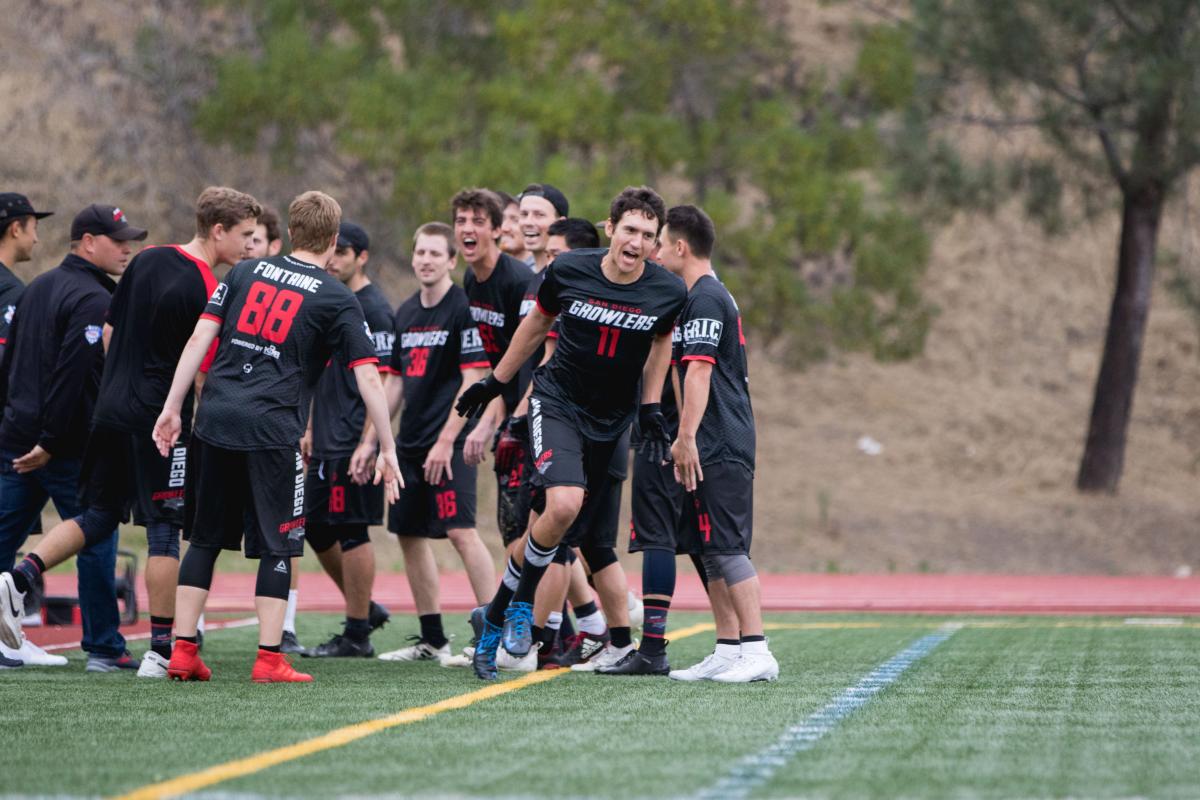 EL: Who are some of the toughest matchups that you've had to deal with in your AUDL career, and why? Any particularly proud individual moments that you'd care to share?

SM: Guarding Mark Elbogen was always a tough matchup, he was such a threat everywhere on the field. Mark Burton is probably one of the most fun players to guard because you know he is going to be involved in their offense so you really have to be active. Then there are guys like Antoine Davis or Matt Rehder that are just a different type of challenge. You have to stop them from using their superpowers or you just don't stand a chance

EL: After battling for five seasons and playing over 60 games in the AUDL, you advanced to your first Championship Weekend with the Growlers last summer, and I'm curious how you'd characterize that whole experience? What are the aspects of the journey from last place to first place in the West and the recollections from the weekend in San Jose that you think about most all these months later? Was there any point during or after the Growlers' 2-12 season in 2016 that you considered walking away from the AUDL in frustration or despair?

SM: The first word that comes to mind is rewarding. We put in so much time and hard work over the years to try and build a winning team, to achieve some success is really validating. To be honest the things that I think about most from our run last year are the plays we left on the field against Dallas. Missed break chances, near blocks, those are the things that stick in my mind. And to put it plainly, no I never considered walking away from the team. The Growlers owners are my friends, and they have given me this amazing opportunity to play in the AUDL. I really don't take it for granted.

EL: Finishing with a couple of life questions, what's the most delicious thing you've cooked during the pandemic?

SM: Recently I got to make French dip sandwiches with some help from my mom. It is one of her signature dishes and now I'm proud to say it is part of my arsenal.

EL: And lastly, aside from ultimate, what's something that you haven't been able to do during the quarantine that you're most looking forward to doing again when (if?) life returns back to normal?

SM: I am looking forward to hanging out with all my friends, and going out on a date with my wife. 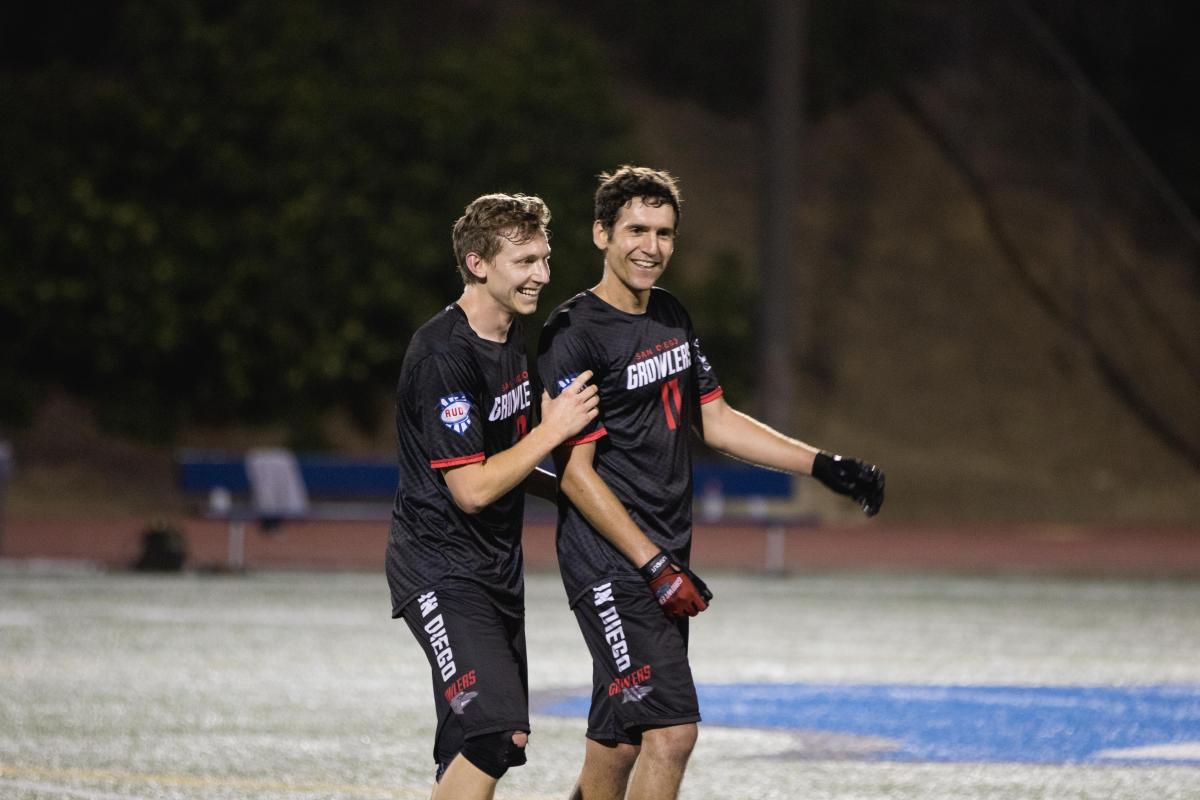