Disc In: A Chat with Quentin Bonnaud | AUDL
Skip to main content 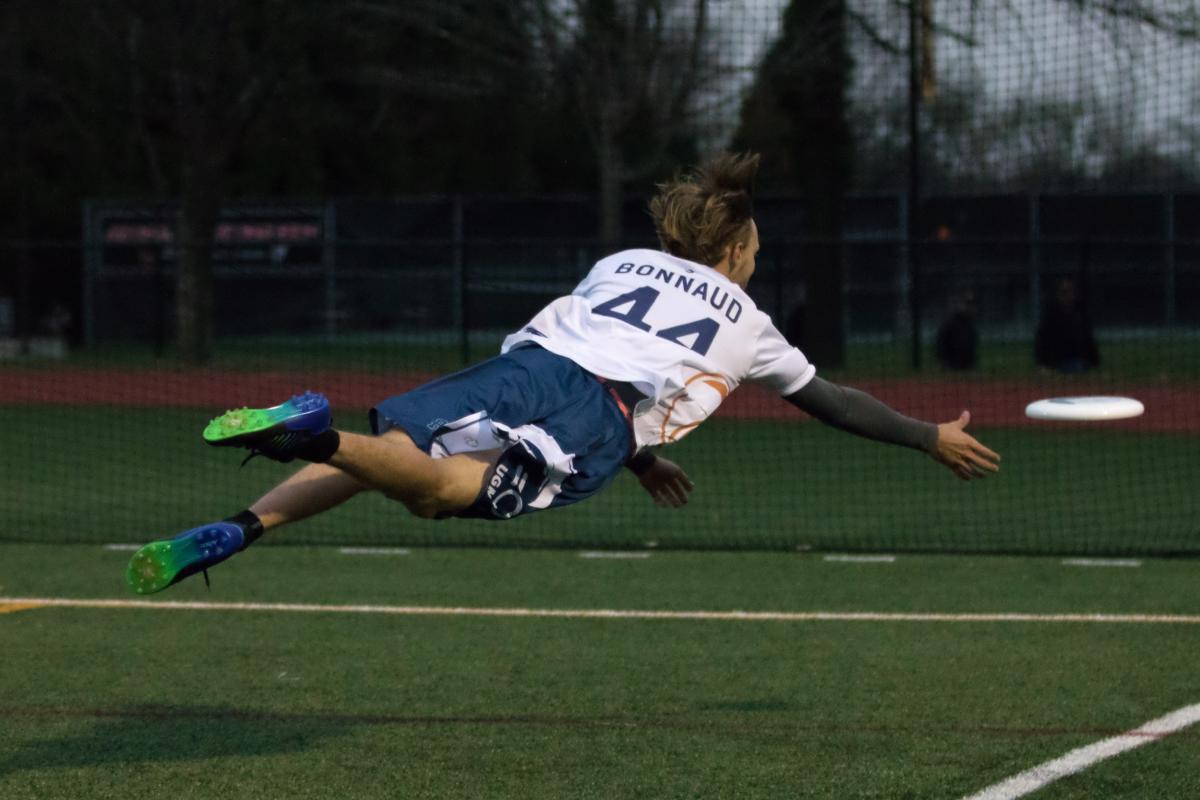 The past two AUDL MVPs, DC’s Rowan McDonnell and New York’s Ben Jagt, each caught 67 goals in 2019, tied for the second-most in the league. If those numbers had been achieved the year before, they would have easily been the best, as Indianapolis’ Rick Gross paced the circuit with 62 goals two years ago. Last summer, however, McDonnell and Jagt would have required about 25 percent more scoring to catch Montreal’s Quentin Bonnaud.

In fewer games than both McDonnell and Jagt—Bonnaud played 12 games while McDonnell played 13 and Jagt played 15—the then-23-year-old Frenchman scored 16 more goals, concluding his 2019 season with a remarkable 83 scores, the AUDL’s highest single-season mark since Mischa Freystaetter, then with Jacksonville, caught 95 in 2016. It’s definitely worth mentioning the fine print, as Freystaetter’s total came in a 14-game season, in which he averaged 6.8 goals per game. Bonnaud’s pace was even more prolific last year, tallying 6.9 goals per game, the highest rate in AUDL history.

“We aren’t [only] looking for Quentin,” insisted Royal Captain Kevin Quinlan last June when asked if Montreal was trying to elevate Bonnaud’s numbers. “He can just get open so easily. He is always in the right spot.”

Watch him maneuver on the field and you understand Quinlan’s assessment rather quickly. Bonnaud brings a brilliant blend of speed, agility, instincts, and feathery hops, along with excellent hands and a sense for the moment that vastly exceeds his relative lack of experience. With 174 goals in just 38 career games, his 4.6 goals per game average is superior to any other player in AUDL history with at least a dozen games played. In three seasons, he’s accumulated enough offense to already be among the top 20 goal scorers all-time, and he has not yet played a game since turning 24 this past March.

It also feels significant that he’s a non-North American player having this type of individual success in the AUDL. The Royal have led the league in foreign players over the past several seasons, bringing French talent into the organization in a very productive and impactful fashion. Across the entire league, we have also seen players from Colombia, Great Britain, Ireland, and Japan play important roles, a positive sign of growth for the sport internationally. Though it’s still somewhat early in Bonnaud’s career to claim he’s the greatest non-North American player in the history of the league, he’s definitely in that conversation, with plenty of time left for him to further elevate his superstar status. As one of two intercontinental players—along with Los Angeles Aviators cutter Joc Jimenez, from Colombia—at last June’s inaugural AUDL All-Star Game, Bonnaud certainly made a strong impression. 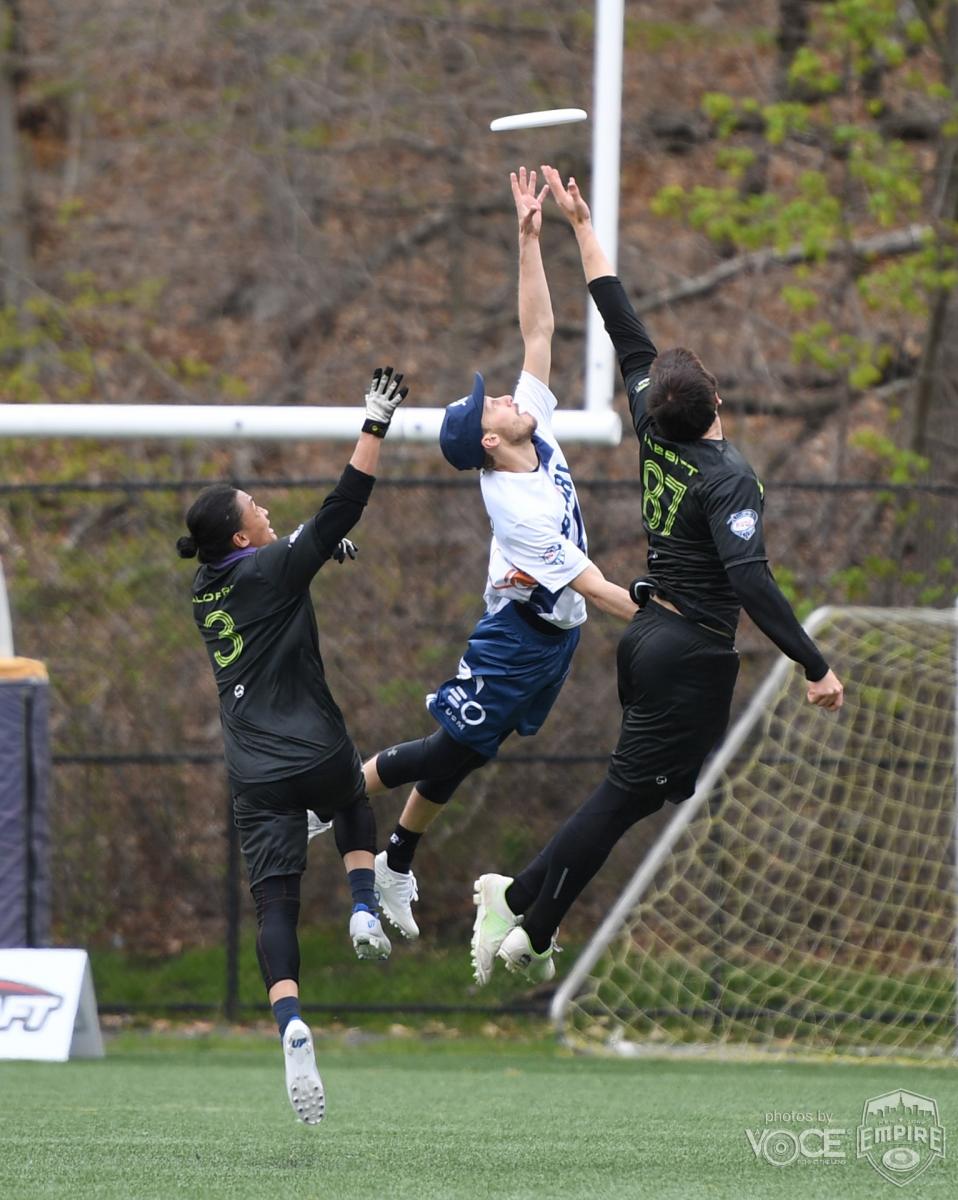 “I was impressed by how smooth Quentin Bonnaud is,” mentioned Minnesota’s Captain Bryan Vohnoutka after the game. “He made a lot of cuts and jumps look effortless.”

Whereas few ultimate ultimate fans in North America knew his name prior to the 2017 AUDL season, Bonnaud has blossomed into a well-known threat on the field, with a pleasant and understated personality off of it. Unquestionably, the Royal are hoping he’ll stick around Montreal for a very long time.

I was excited to catch up with Bonnaud last week to learn how he’s spent his pandemic, along with inquiring about his initial transition into the AUDL and his goal-scoring spree from last summer. The conversation has been edited slightly for clarity.

Evan Lepler: Firstly, where are you, how are you, and what has life been like for you over these past few months during this pandemic?

Quentin Bonnaud: I'm back living in Montreal since one month ago. Before that I was at my girlfriend’s father’s house, about 75 minutes outside of Montréal, since the beginning of the confinement. It was easier to go out there thanks to a garden. 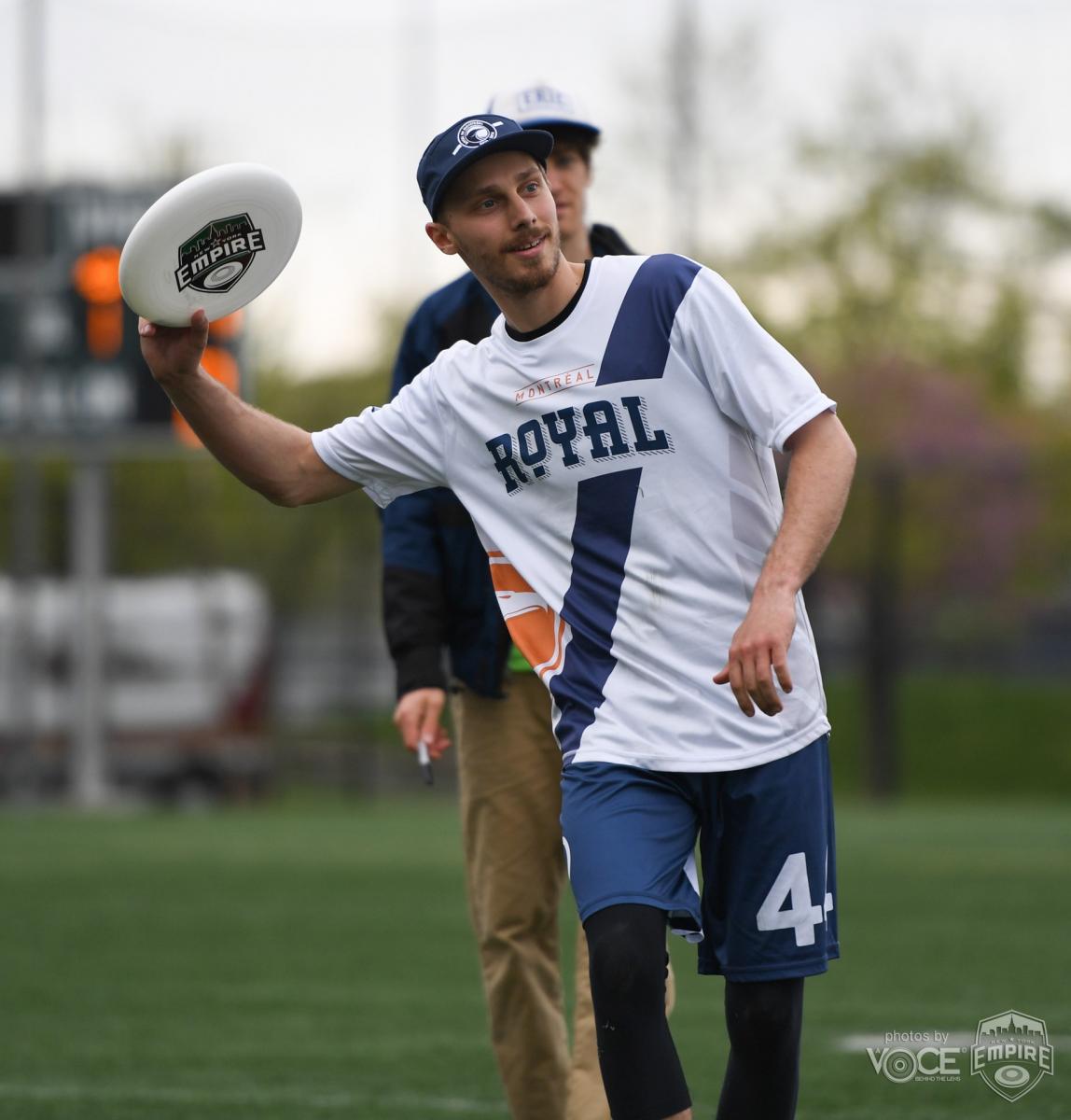 QB: I have not been very active because I'm injured. It could be an herniated disc. All my activities are about stretching, and I walk as much as I can. I don't have to tell you that I'm not ready for the season to start soon. But the team trains every week in video-conference. As for when my injury will be better, I really don’t know how much time it’s gonna take. It could be one month or six.

EL: Can you share the story about the first ever contact you had with the AUDL? Where and when did that happen, and how were your recruited to come to Montreal and join the Montreal Royal?

QB: My first contact with the AUDL was with Maxime Guy. He played for the Royal until 2016. He contacted me and other French players in December 2016, and I came with Stève Bonneau and Sacha Poitte-Sokolsky for the tryouts on January 2017. 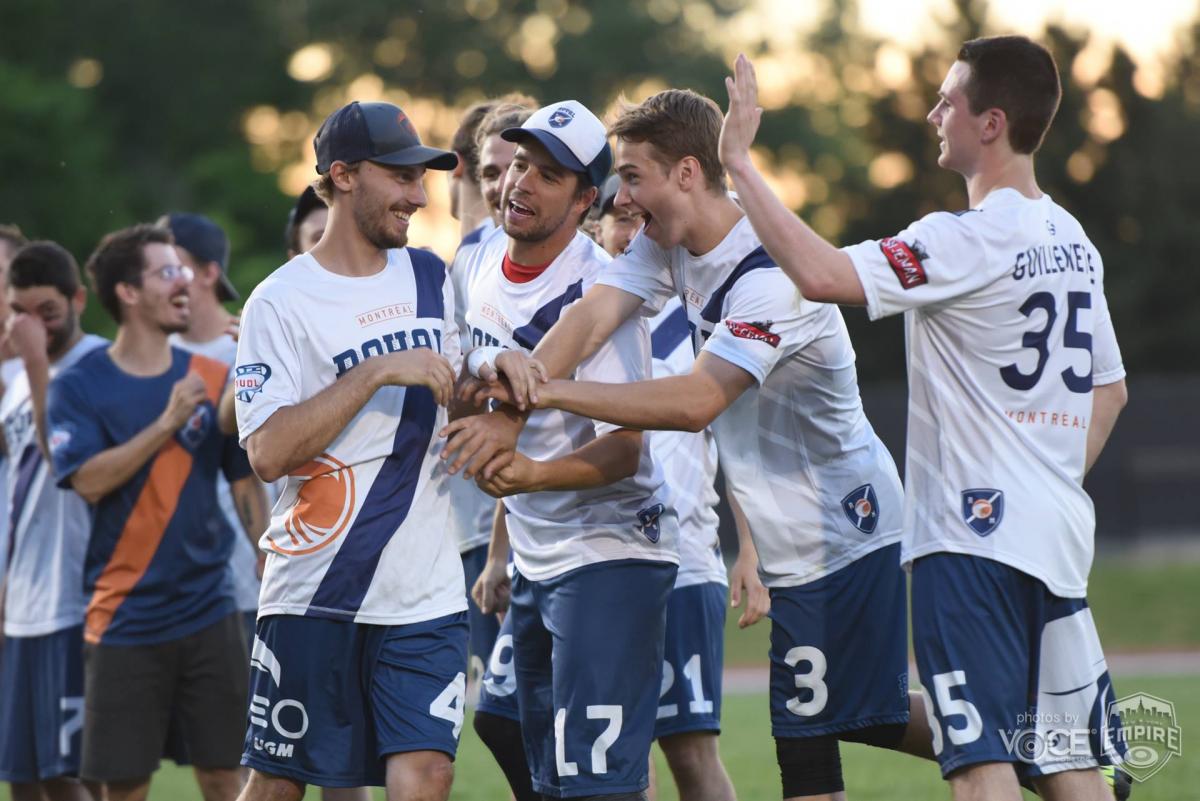 EL: What were your initial expectations for how you'd match up competitively with the best players in the AUDL after you arrived? And what do you remember from the early practices and games in terms of how you fit in with the team and found a role pretty quickly as a big-time goal scorer? Any particular "Welcome to the AUDL!" type memories, a moment or moments where you felt particularly humbled and/or proud?

QB: I was very excited to play in the AUDL and face some of the best players in the world. At the beginning, I wanted to use the fact that the players didn't know me. The first thing I noticed was the physical intensity; it was way harder than all the experiences I had before. I will always remember my first game in the AUDL. It was against Philadelphia, and we won in double overtime. It was a crazy game.

EL: Before going further, can you quickly share your narrative about what sports you played growing up, how you discovered ultimate, and how long it took you to begin feeling fairly confident on the ultimate field?

QB: Before ultimate frisbee, I began with tennis at two years old—wasn’t really tennis at this age—until I began ultimate at 16 years old. I played golf for three or four years too. I discovered ultimate thanks to friends who were already playing in club. I was 15, I think. Then I signed up in my school team with those friends and we won the French school championship. After that year, I signed to play with the club of Tchac. It took me two or three years to feel confident on a senior field.

EL: In your first two seasons, you caught 81 goals in 24 regular season games; last year, you snagged 83 goals in just 12 regular season games! How did you so significantly boost your production from 2017 and 2018 to 2019? Any major changes in your training? Do you think it was more about your role with the team or just becoming more comfortable with the professional style or what?

QB: I think it's a result of several things. First, I know my team better and better and vice-versa. I was only 20 when I arrived in the AUDL, so I gained in maturity and experience, and then last year I felt very confident on the field. 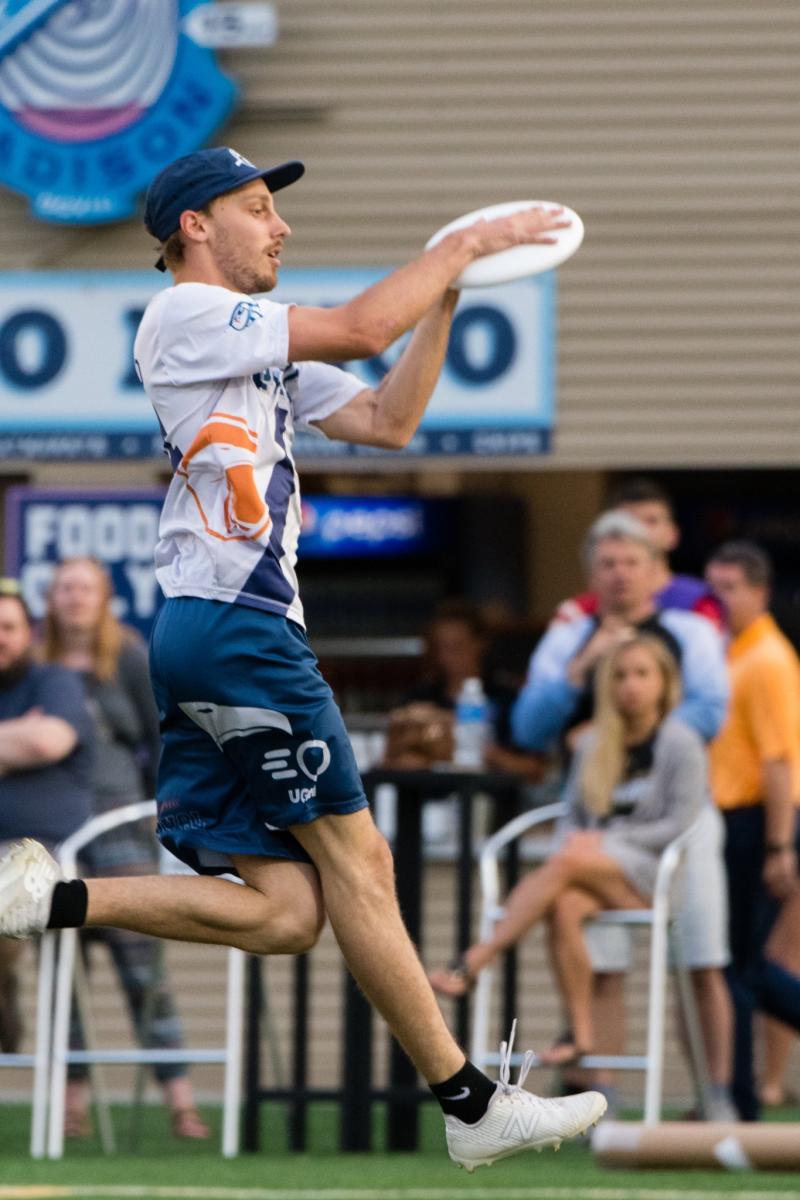 EL: In your first couple seasons in the AUDL, who were the players you most looked up to as mentors, and why?

QB: The player I watched the most was Kurt Gibson because he can play everywhere and be dominant. But my mentor since I started ultimate is Stève Bonneau; he was always here to make me grow up.

EL: Considering how you have mostly played O-line throughout your career, I'm wondering who have been the toughest defenders that you've had to deal with over the past three years, and why?

QB: This is a difficult question. I’ve played against a lot of amazing defenders, like Jeff Babbitt, the Drost brothers and others. But I’ve had a lot of difficulties against Marijo Zlatic from Toronto. I think that he reads me well, and he's tall with long arms for the mark. 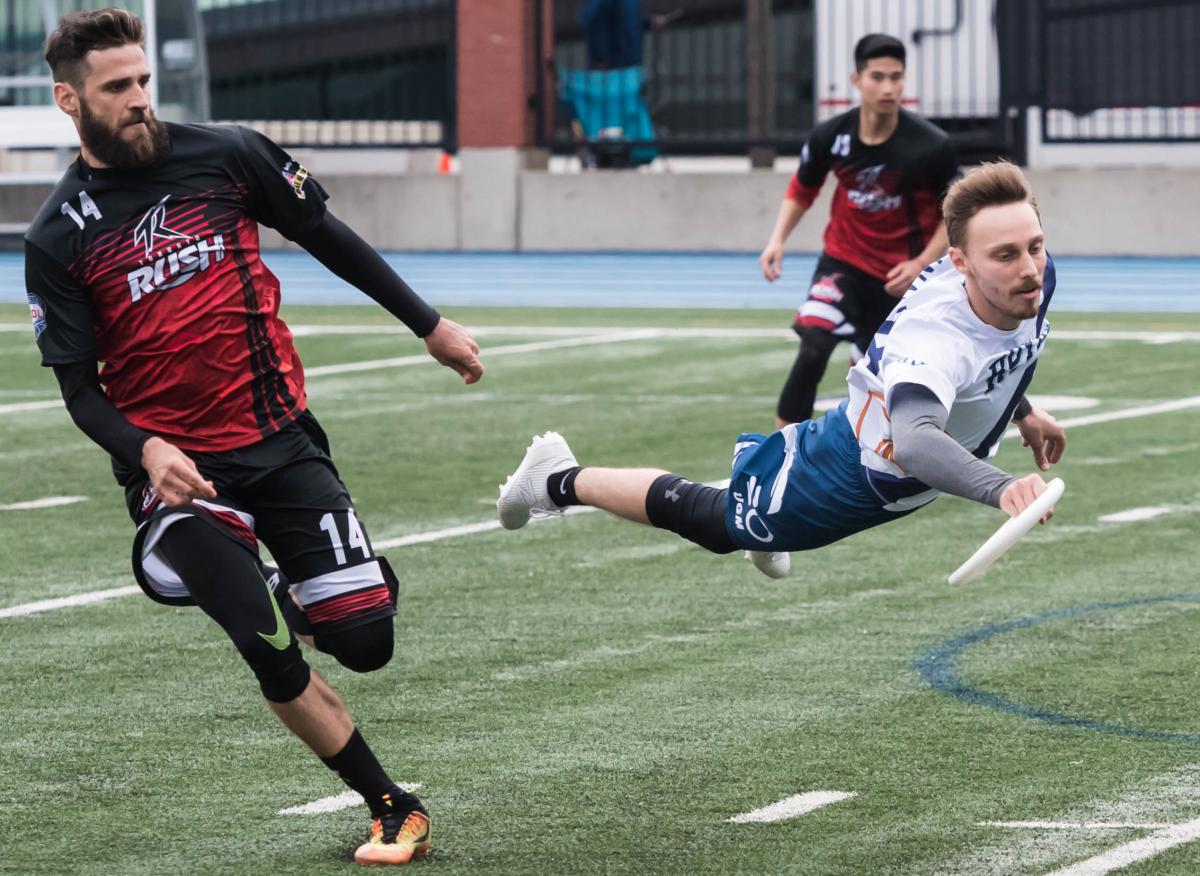 EL: What's been your favorite game as a member of the Royal, and why?

QB: The first game that came to mind is a game against New York in 2018 season. We had beaten them at home the week before, and this game was at New York; we were four or five points down with something like five minutes left, and the team made some amazing defenses to win by one. I had a good game, but I really loved the energy that the team put on field to win that game.

QB: Next to ultimate, I really like to climb. During the offseason, I climb a lot to practice something else other than ultimate.