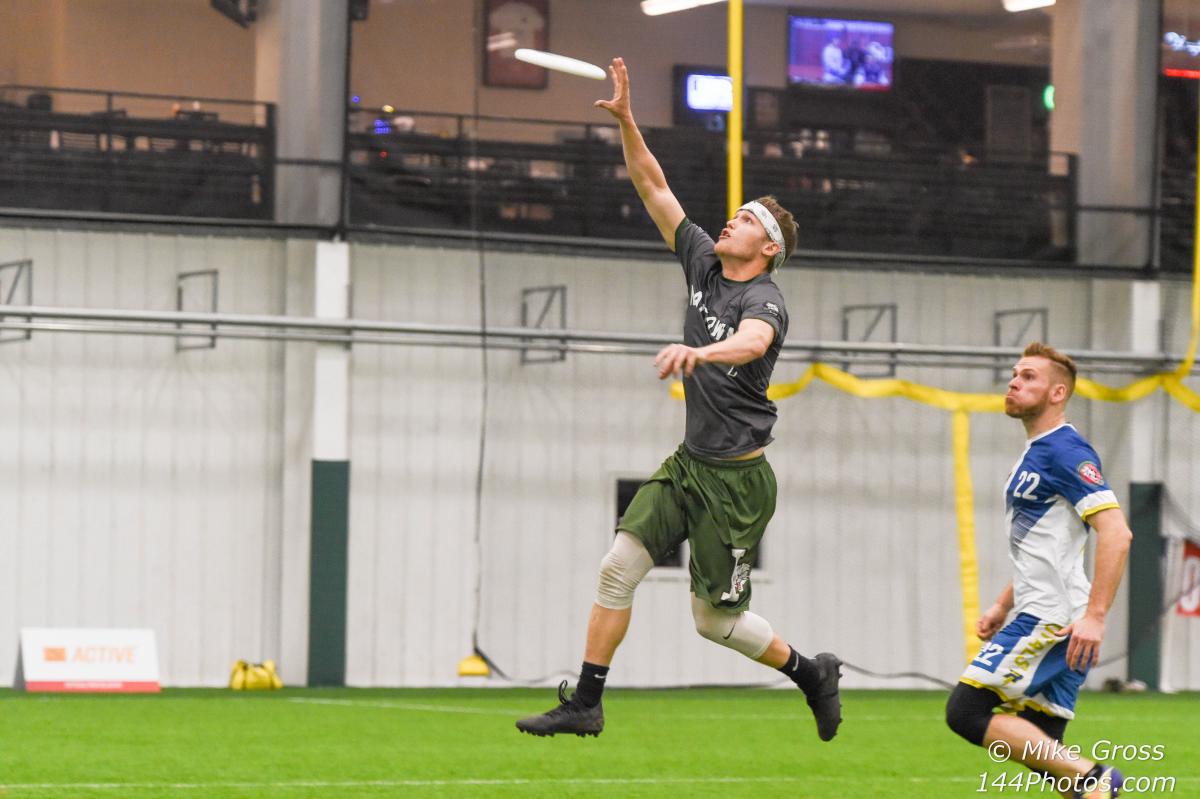 Since he joined the Indianapolis AlleyCats as an 18-year-old in 2014, Levi Jacobs has rarely if ever been the team’s number one option. Opponents, of course, know that too, and sometimes they try to funnel the disc his way, challenging him to become a primary playmaker on the Indy O-line. When the Madison Radicals embraced this strategy for a mid-June game in 2018, the 5’9” Jacobs made them pay.

In arguably his greatest personal performance in six seasons with the AlleyCats, Jacobs torched the Radicals’ prolific defense for six goals and four assists in his 20 points played, completing every one of his throws for a turnover-free +10 when Indy beat Madison for the first time ever on June 17, 2018. Over the course of the past three seasons (2017-19), this is the only instance where the Radicals’ surrendered a double-digit plus/minus to an individual opponent.

“Levi was integral to our success,” fellow AlleyCat Cameron Brock explained after that game, a 21-20 AlleyCats triumph that squelched the Radicals’ 16-game winning streak against Indy. “I think a lot of people look at our O-line and see me, Rick [Gross], Travis [Carpenter], Keegan [North], etc, and they don’t really think about how they are going to handle Levi…When he first joined the team, we always called him ‘The Gunslinger’ because he would throw to anything he saw moving deep. He still has a little bit of that mentality in him, but now the throws are crisper and the decision making is much-improved.” 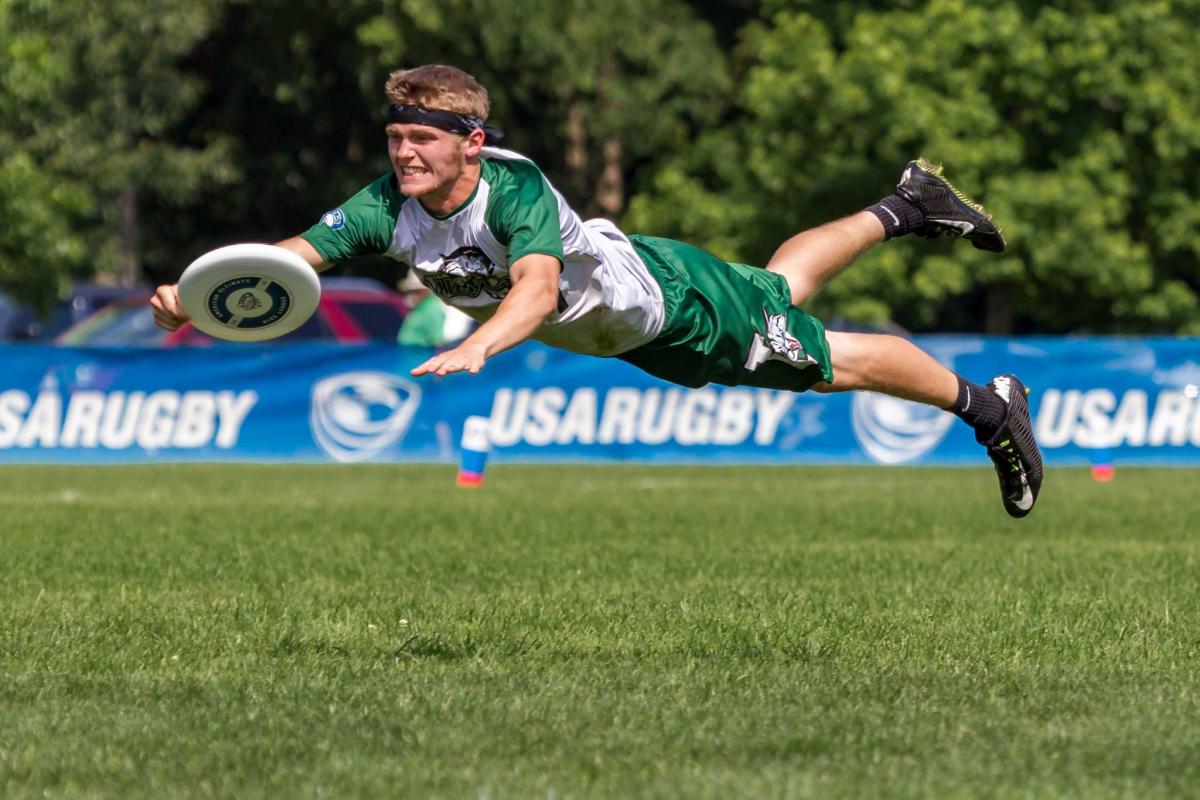 Unquestionably overshadowed by many of his accomplished teammates, Jacobs has quietly constructed a mighty impressive half-decade of positive contributions to the AlleyCats organization. Though he hasn’t yet become an all-time stat king like Brock or Plew or risen to All-AUDL stature like Gross or Carpenter, it’s relevant to remember that he just turned 24 last month and his best days very much still lie ahead. In that context, it’s actually pretty striking to realize that even though he’s never played an AUDL game as a 24-year-old, his 70 appearances all-time ranks among the top 50 in league history. Among everyone who’s ever suited up for a professional ultimate game, only Raleigh’s Terrence Mitchell saw the field more before turning 24.

Since moving full-time onto the AlleyCats O-line at the start of the 2018 season, Jacobs’ all-around production has been tremendous, with 82 assists and 66 goals in 28 games, including the playoffs. If he can stay healthy and hungry as he reaches his athletic prime, he’s certainly a candidate to drop in a 40/40 or perhaps even 50/50 season at some point, especially as he bears more responsibility if and when aging vets like Brock and Plew decide to ease back on their unrelenting commitments to the franchise.

I recently connected with Jacobs to see how he’s handled life during the pandemic, to get his perspective on the AlleyCats’ journey to last year’s Championship Weekend, and to reminisce about his experience as a member of the USA Junior National Team back in 2014. The conversation has been edited slightly for clarity. 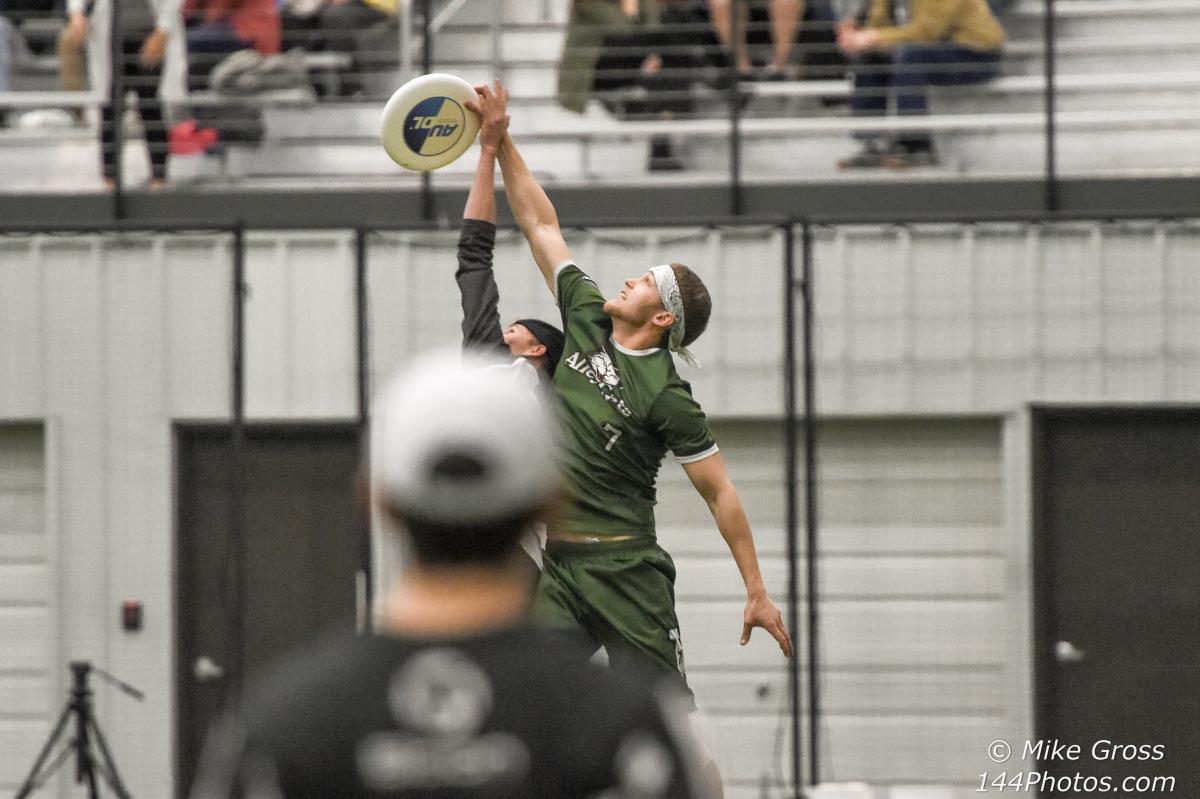 Evan Lepler: Firstly, how's everything going and what has life been like for you since mid-March? Any particular highlights from the past few months?

Levi Jacobs: Life has been pretty crazy since all of this has happened. I work in construction doing house remodels and such so we slowed down a lot when the COVID first came around, but after a couple of weeks we were just the opposite. So recently I have been super busy at work sometimes working six or seven days a week. But I would say the highlights would probably be getting some extra quality time with my new fiancé and my two pups!

LJ: I got a little lazy at the beginning of all the shutdowns and stuff in mid-March, but since April I have been lifting a lot and getting in some sprinting and throwing workouts in the daylight after work. Unfortunately, working a manual labor job for long days and then having to train after is hard; I know that I need to do better. But I would say if the season started today I would probably be around 75-80 percent.

EL: You made your AUDL debut for the AlleyCats in 2014 as an 18-year-old, playing three games late in the season (and winning all of them). What do you remember most about your first few AUDL experiences? Did you feel like you were ready to compete at the pro level, and did you have any "Welcome to the AUDL" type moments? How did these games help or hurt your confidence going forward into 2015 and beyond?

LJ: I remember that it was awesome! I had just turned 18 and was able to play with these guys that I had been watching for the past two years at the highest level of ultimate there was. There’s not a lot of feelings like playing under the lights with a loud crowd and a big play to make everyone cheer. I think I was ready to play those three games at the pro level at least. To give me a feel for it and the drive to want to get better.  I had a couple of “Welcome to the AUDL moments,” I guess. We had a really hot game, and I’m too stubborn to wear gloves. Well, it got to the point that my hands were super sweaty and I tried to huck it, only for it to just wobble to the ground not far in front of me. So that was an embarrassing moment in front of everyone in the crowd. But I think that same game at the end is when I had a layout catch in front of someone on Cincy Revolution who was laying out on D and I ended up throwing it in for a score in a close game! That season definitely put some stuff in perspective for me since I was used to playing high school ultimate and it was a completely different ballgame! But I think I played well enough in those three games to give myself enough confidence and drive to get better for the 2015 season and beyond.

EL: Before going further, can you quickly share your narrative about what sports you played growing up, how you discovered ultimate, and when your passion for frisbee really took flight?

LJ: Sure, I actually only really played sixth grade football until I tried frisbee in high school because I had a couple of friends try it out as well. But I can say that I got stuck to playing frisbee at the first practice I went to. Everyone was just so inviting and nice, not to mention I got to see Nick Hutton making layout Ds and everything at the same practice.

EL: In your first three full seasons with the AlleyCats (2015-17), the team was usually competitive and won 20 games but never made the playoffs. Over the past two seasons (2018-19), the Cats won 21 games, including two playoff victories, one of which earned you and your teammates a trip to Championship Weekend. In your opinion, what were the most important factors in building the gradual improvement and advancing to last year's Final Four? How would you characterize the feelings and emotions you had when you beat Pittsburgh in last July's Midwest Division final to make it to Championship Weekend?

LJ: The most important factors in my opinion to the gradual improvement was definitely chemistry. Most of these guys on the team have been playing with each other for five years or more, some of which have been the AUDL season and the club season. So we have learned a lot of each other’s tendencies and what not. But also I think of the coaching staff, and the offensive schemes starting around 2018 with Head Coach Leonard were a big factor. Not to mention how much real-time experience all of us have gotten and now some championship experience under our belt even. When we beat Pittsburgh, I was really happy! We had worked towards that goal of getting to Championship Weekend for years. It was nice to take that trip with the guys I’ve been grinding with since 2014-15 and drinking that champagne after that game was that much sweeter!

EL: Who were the players you most looked up to as mentors in your first couple seasons in the AUDL, and why?

LJ: Honestly my main mentors those first couple of years were the great throwers on our team or in past teams. I knew how good my teammates were, and they were there to help me and cared to make me better! As throwers, looking up to Keenan Plew, Kyle Cox, and even our Coach Eric Leonard. But obviously I had the people that could sky and layout well to look up to like Travis Carpenter, Rick Gross, and Nick Hutton.

EL: Is there anything specific about your game or skillset that you've targeted to improve in the offseason, and if so, how have you gone about pursuing that goal?

LJ: I don’t know if this is a cop out or not. But honestly I think some of the hardest matchups on me and for me to guard are my teammates! 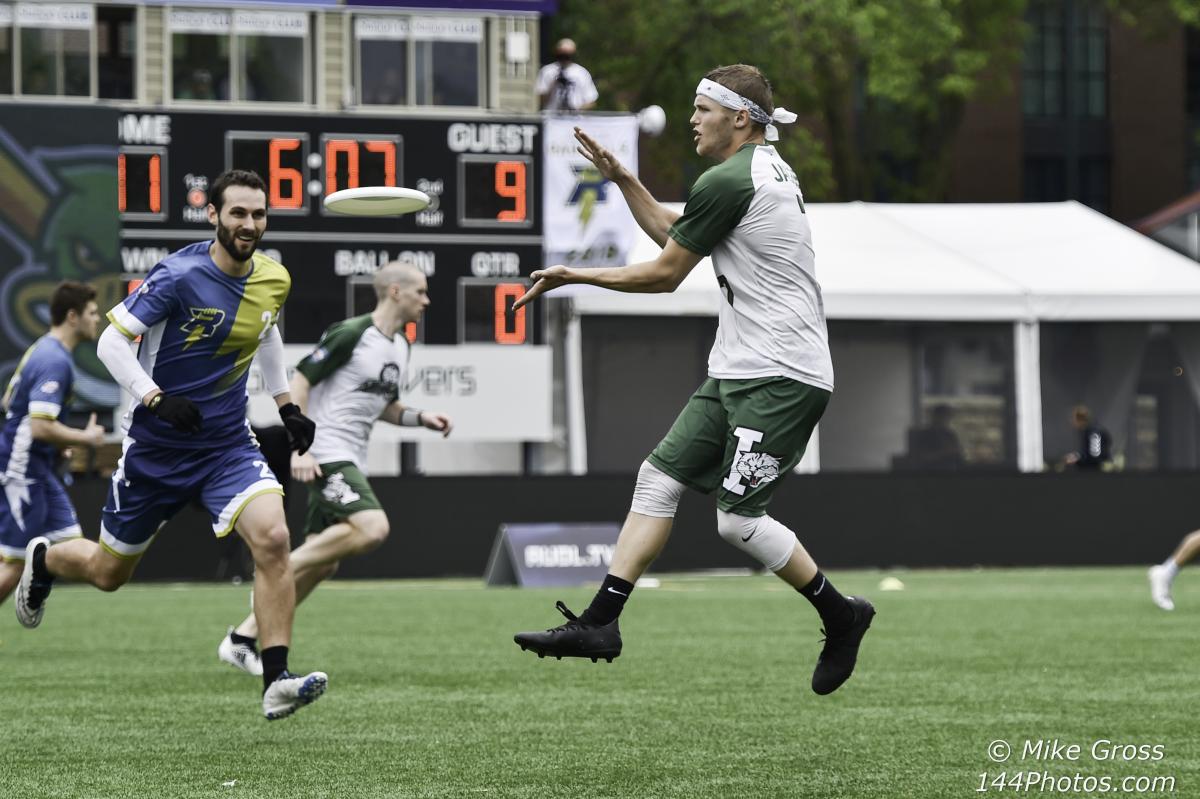 EL: Back in 2014, you were on the USA National Team that competed at Junior Worlds in Lecco, Italy. What are your primary recollections about that whole experience, from making the team, to meeting all your teammates from around the country, to traveling and competing for a world title? And obviously the final of that tournament was a wildly competitive battle that could have gone either way; when you think back to experiencing the last point of that Canada game, what comes to mind?

LJ: That whole experience was amazing! I learned so much about my game and how to improve it. From teamwork and positivity and how united a team can truly be. The tryouts were brutal and I remember how exhausted I was after them. But I also remember how happy I was when I received that email saying that I had made the team. When we all met up, most had already known each other and played in the past at some point or another, but soon everyone was just talking and everyone felt welcome on the team, which was awesome. Being able to train in New York and then getting to travel together and play in Lecco, Italy was something that I would have never thought that I would do if you had asked me back in high school because back then I was a shy kid that didn’t like doing anything and ultimate kind of helped me grow out of my shell. And that last game still hurts because of the loss, but there’s nothing that we can do about it now, but I do wish I was able to do more to help. I know that I learned a lot from that loss and the experience was still amazing, but second place just hits a little different.

LJ: Ultimate is obviously the number one hobby but I do enjoy disc golf! My dad got me into it when I was little and I should probably be better at it, but I still have a lot of fun playing and getting better.