Disc In: A Chat with Jimmy Towle | AUDL
Skip to main content 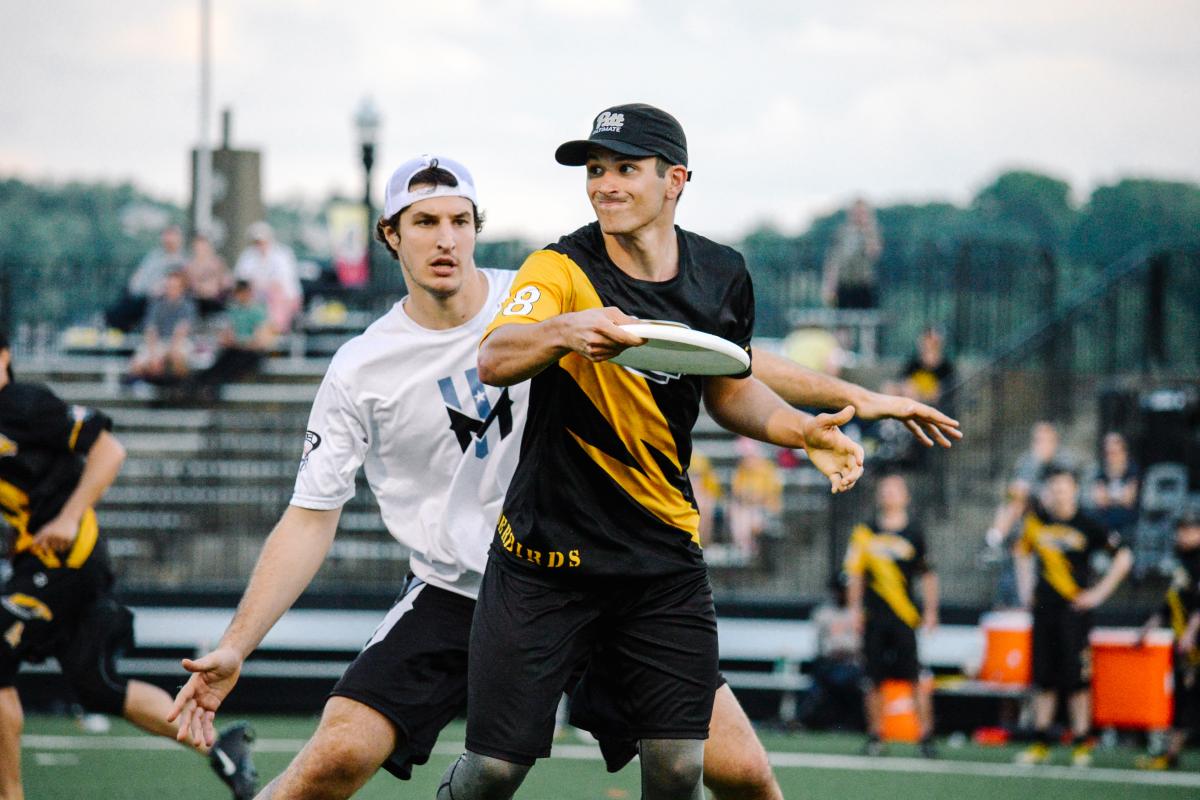 In 2016, when Pittsburgh Thunderbirds Head Coach David Hogan needed an extra player for a mid-June contest against Chicago, he had the luxury of ‘calling up’ a 20-year-old kid with local ties whom he had already coached a half-decade earlier. Back in 2011, Hogan, who led the Thunderbirds to three straight Midwest Division title games in his three years (2015-17) at the helm of the franchise, led the Pittsburgh under-16 youth team that competed in the first ever national U-16 Youth Club Championships. The team finished sixth among the eight-team field, but Jimmy Towle, then just 15 years old, paced his entire division in goals. Clearly, even at a young age, Towle had a knack for getting open downfield and making plays in the end zone.

But in his first eight AUDL games, spanning the ’16 and ’17 seasons, Towle rarely had a chance to contribute to the O-line. Even in his second year with the T-Birds, joining the squad in June after his college season at Pitt concluded, he played mostly defense until an opportunity arose due to injury. Although he only experienced 15 O-points in his final five regular season games, he had stepped up in several of those moments, again catching the eye of Coach Hogan by making some critical grabs in key situations late in the year when a teammate had gone down mid-game.

Seeing that impact, Hogan decided to shift him onto the offense for Pittsburgh’s opening playoff game at Minnesota, a wild night in St. Paul where the Thunderbirds struggled early before storming back from a five-goal deficit to prevail 26-25. A week later, with a berth in Championship Weekend on the line in Madison, Towle started on offense again, and although the Thunderbirds fell short of the final four, Towle’s role had seemingly been cemented. Including those two playoff games in 2017, the now 24-year-old Towle has been on Pittsburgh’s O-line for 27 straight games. 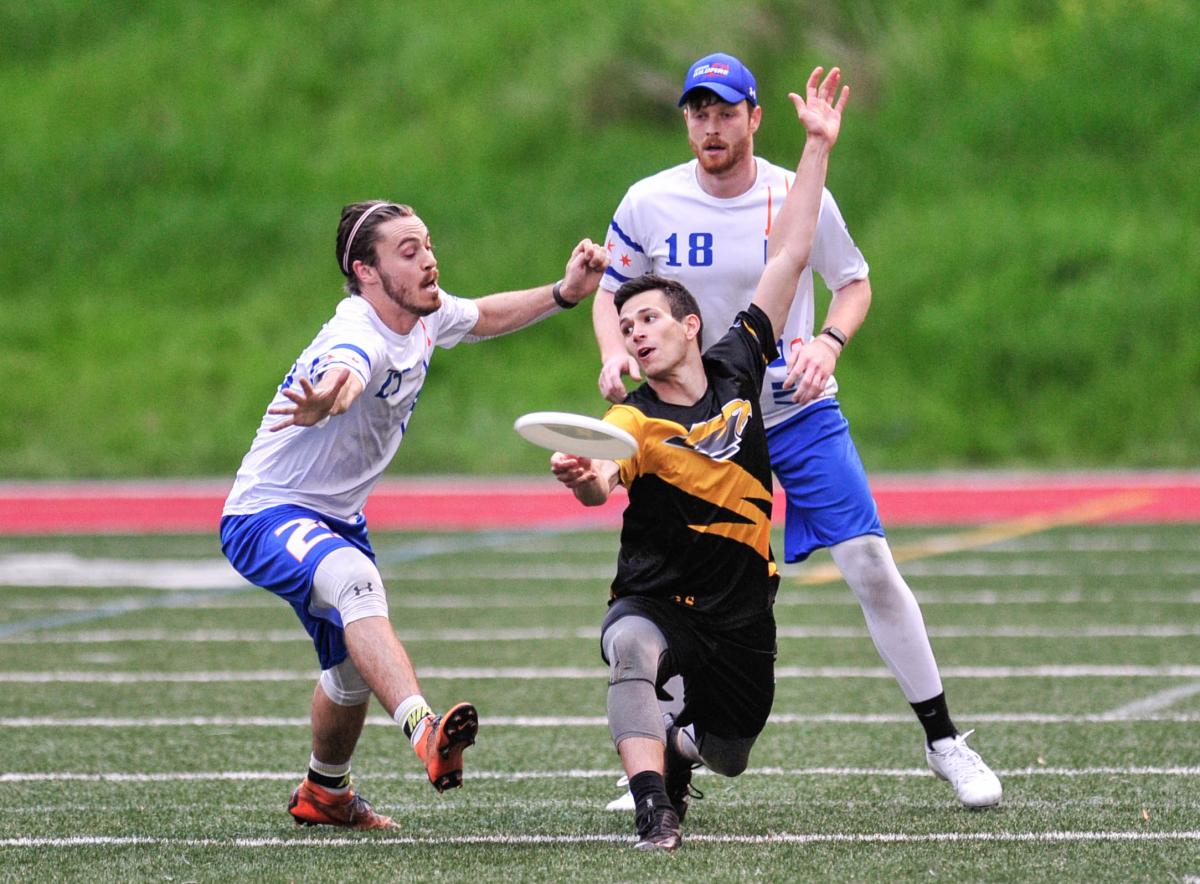 The last 25 of those appearances have also been as a captain, a role Towle assumed for the Thunderbirds in 2018 and continued last year, helping the franchise rebuild from a 4-10 record two years ago to an 8-4 clip and a postseason victory in 2019. Over these two seasons, Towle has snagged 72 goals, second-most on the squad behind last year’s MVP runner-up and his old high school teammate, Max Sheppard.

Born just a couple months apart, Towle and Sheppard—who both will turn 25 before Labor Day—figure to be two of the Thunderbirds’ cornerstones for much of next decade, looking to pilot Pittsburgh to unprecedented heights. The franchise has been a game away from Championship Weekend four times in five seasons, but still seeks its first trip to the AUDL’s premier event. Entering a new division when play resumes, shifting from the Midwest to the Atlantic, should create a different challenge but familiar opportunities for the Steel City squad that has averaged more than nine wins a year since 2015.

In our conversation from last week, I chatted with Towle about switching divisions, watching Sheppard develop into a star, and his personal growth as a player from Fox Chapel High to the professional ranks. The conversation has been edited slightly for clarity.

Evan Lepler: Firstly, how's everything going and what has life been like for you since mid-March? Any particular highlights from the past few months?

Jimmy Towle: Things are going well. My work quickly moved to full time work-from-home so this lifestyle has become pretty routine. It's nice to spend more time with my girlfriend since we're quarantined together and I've been on a few fun weekend Zoom calls. We cook a lot at home and have been trying new recipes, including baking some cookies and banana bread. We're currently binging The Sopranos.

JT: I try to stay inside and do body weight workouts every day. It's been easier to focus on upper body since I live in a condo building and any plyometrics I do are going to be heard from the lobby. It's not ideal, but my full body is feeling good and ready to take the field when the time comes. I'm not quite at 100%, but could get there quickly after some agility and footwork drills.

EL: You made your AUDL debut for the Thunderbirds in 2016 as a 20-year-old, but played just one game that year, a June victory over Chicago. What do you remember about that game and that experience? Did you feel like you were ready to compete at the pro level, and did you have any "Welcome to the AUDL" type moments?

JT: 2016 was a big year for my development as a player. Of all the opportunities I had to grow, getting the call to suit up for a game was the most exciting one. I didn't get many chances to play in front of a home crowd, especially at a field around where I grew up, so I cherished the moment. I felt ready coming off College Nationals and played an okay game. I still remember the mistakes I made, but more importantly I got my first score and a taste of how fun it is to play in the AUDL. 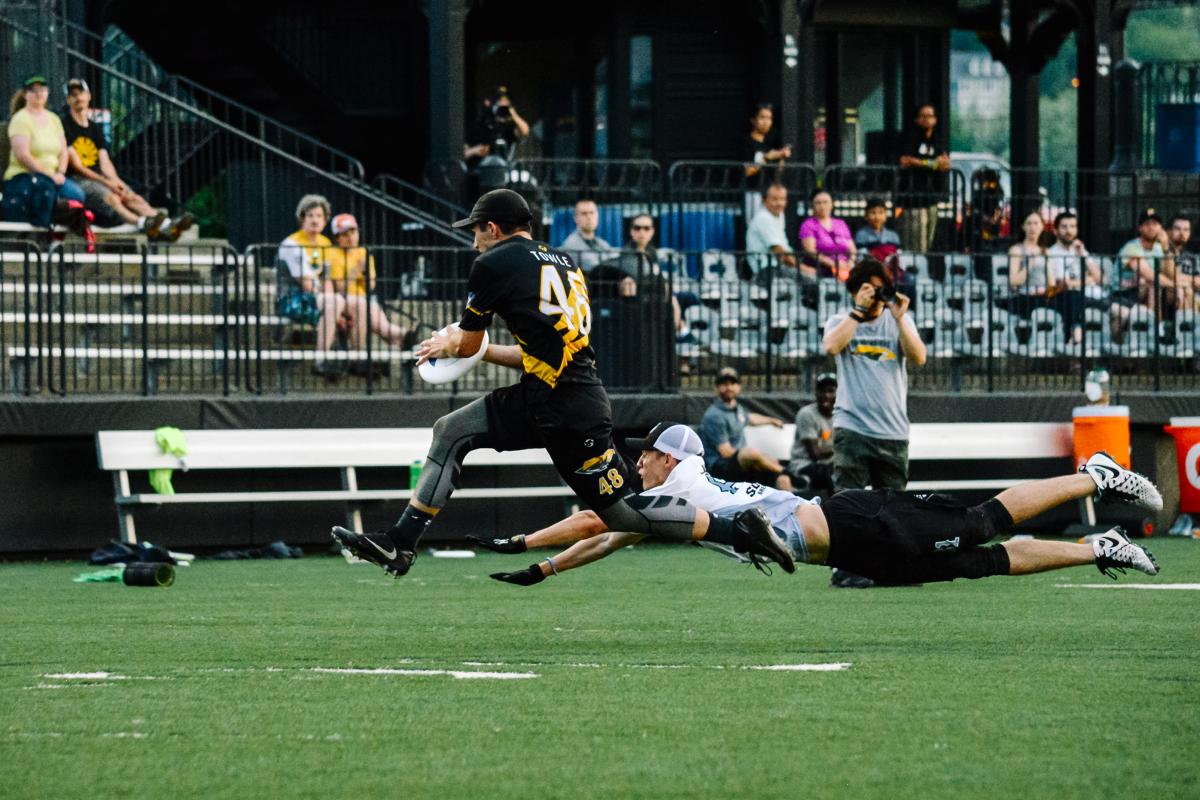 EL: Before going further, can you quickly share your narrative about what sports you played growing up, how you discovered ultimate, and when your passion for frisbee really took flight?

JT: As a kid, I started with baseball, then learned to appreciate soccer. I could hold my own, but was never very skilled. In middle school, a few of my friends would throw around so we spent many days at the park "preparing" to try out for the high school team. I didn't play until tenth grade, but have been hooked ever since my first tournament. It was strange at first seeing so many people gather to play ultimate, but thrilling to compete. I actually scored on a layout grab that got called back by none other than Pat Earles. He doesn't remember it, but I've since forgiven him. The real defining moment early in my career was when Fox Chapel [High School] won Pennsylvania states in 2012.

EL: Having been teammates with Max Sheppard first in high school and now with the Thunderbirds, can you share your thoughts about how he's grown and evolved as a player? When you first started playing with Max, did you envision him developing into the player he's become, winning All-Star Game MVP and finishing second in the 2019 MVP race?

JT: He’s always been a stud. The first time I ever saw him play was at a pick-up game before I knew any of the rules and he was there pulling with a thumb flick. I knew him from school, but that's when I saw him in his element for the first time. He was a blast to play with because we had a good system of him putting up beautiful hucks to the end zone for me. He's always had the talent to play at the highest level, but his game matured over the past couple years into must-watch entertainment. 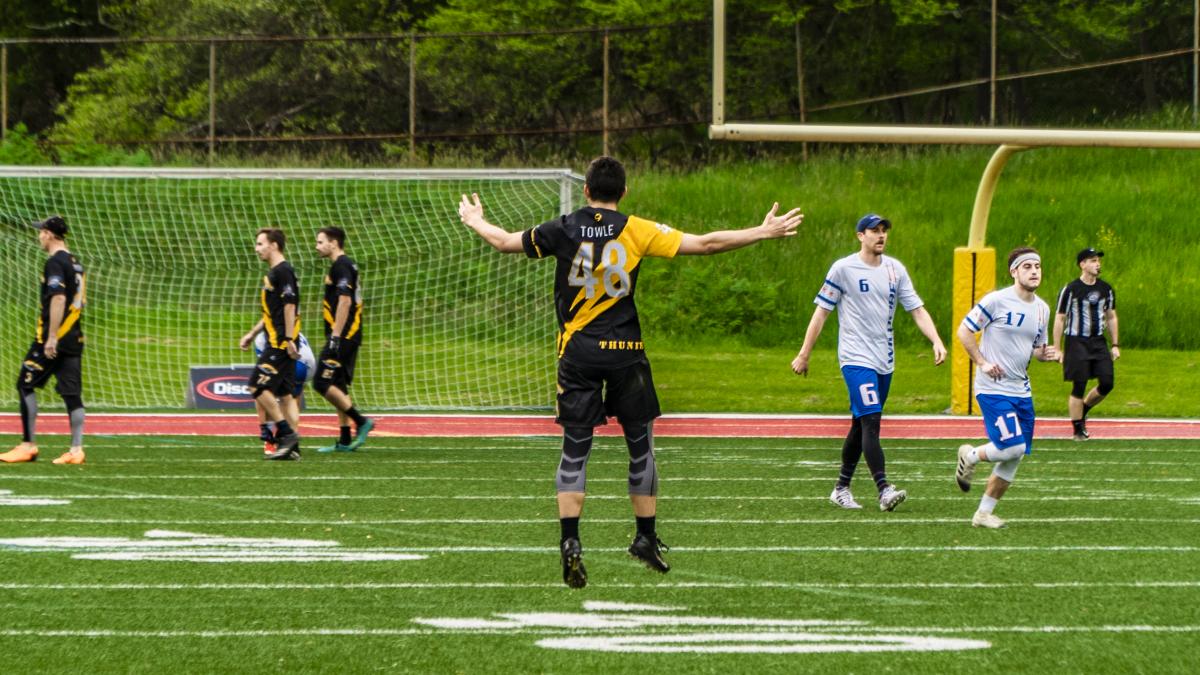 EL: Your first full season with the Thunderbirds was 2018, and although you had a very strong year individually, the team struggled to win... What are you main memories of the adversity that the team experienced in 2018, and how did the three straight wins at the end of the year redefine your collective mindset heading into 2019? Was there a specific turning point where things began to click and a tone was set that helped guide the franchise back to the Midwest Division title game?

JT: Expectations were low in 2018 after we lost some of our stars from previous years. Pat Hammonds stepped into the coaching job, and he knew how to ignite passion and made every single person feel like they were contributing. Players stepped into bigger roles, and I was chosen to be a captain. Despite the growing pains, those last few wins—especially the Minnesota comeback—showed us that we were capable of more. We had a lot of returners the next year to bank all of that hard work and it got us to back in the divisional championship.

EL: Who were the players you most looked up to as mentors in your first couple seasons in the AUDL, and why?

JT: When I joined the team for the back half of the 2017 season, I had already played with most of the team through Pitt or the local seasonal leagues. Max Thorne has always been a role model of mine. He plays cool and calm, but has a fire to win that makes him the unstoppable player he is. Unfortunately, he left after that season and I had to become a mentor to the newer players. Also at the time, Ethan Beardsley had an impressive ironman streak of games that set the tone for how committed I should be to the team. 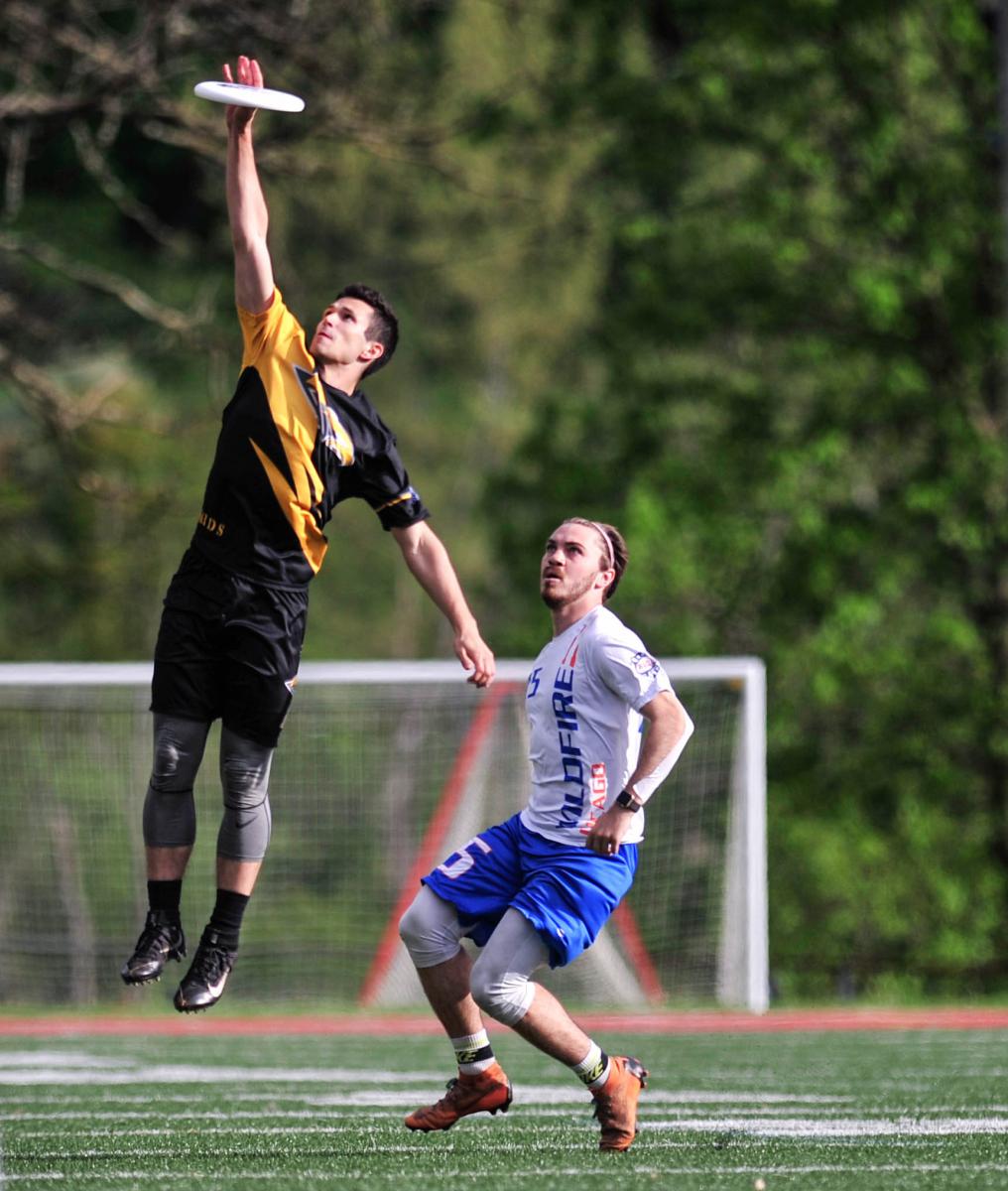 EL: Is there anything specific about your game or skillset that you've targeted to improve in the offseason, and if so, how have you gone about pursuing that goal?

JT: Nothing specific. I try to spend the brief time of year I'm not playing ultimate to cross train with other sports. Soccer and basketball are my first choices, but I'm open to whatever my friends are interested in doing. It helps my mind and body to adapt to playing something different and it lets me come back into the season fired up with a fresh perspective.

JT: Most of the defense I've had to play with Thunderbirds was after we turned the disc on O. The matchup that immediately comes to mind is Jordan Taylor on the Wind Chill. He can make huge plays and is a workhorse on both sides of the disc. Minnesota also has a great handler core that can be squirmy and tough to shut down. The team I've struggled the most against as an offensive player is Madison. No players individually stick out, but their collective group plays impressive team D that can make me feel totally lost as to how to get open.

EL: What was your first reaction to the offseason news about AUDL realignment, particularly with your divisional opponents changing so significantly?

JT: I was excited. We've built great rivalries with our Midwest opponents, but the Atlantic division is going to be a lot of fun. DC and Raleigh are two teams I really want to play considering how great they have been in recent years. It'll be nice to play our state rivals Philly more often and to travel down south for games against Atlanta and Tampa Bay. I'm going to miss playing teams from the Midwest, but the change feels refreshing since we haven't had many cross-division games. 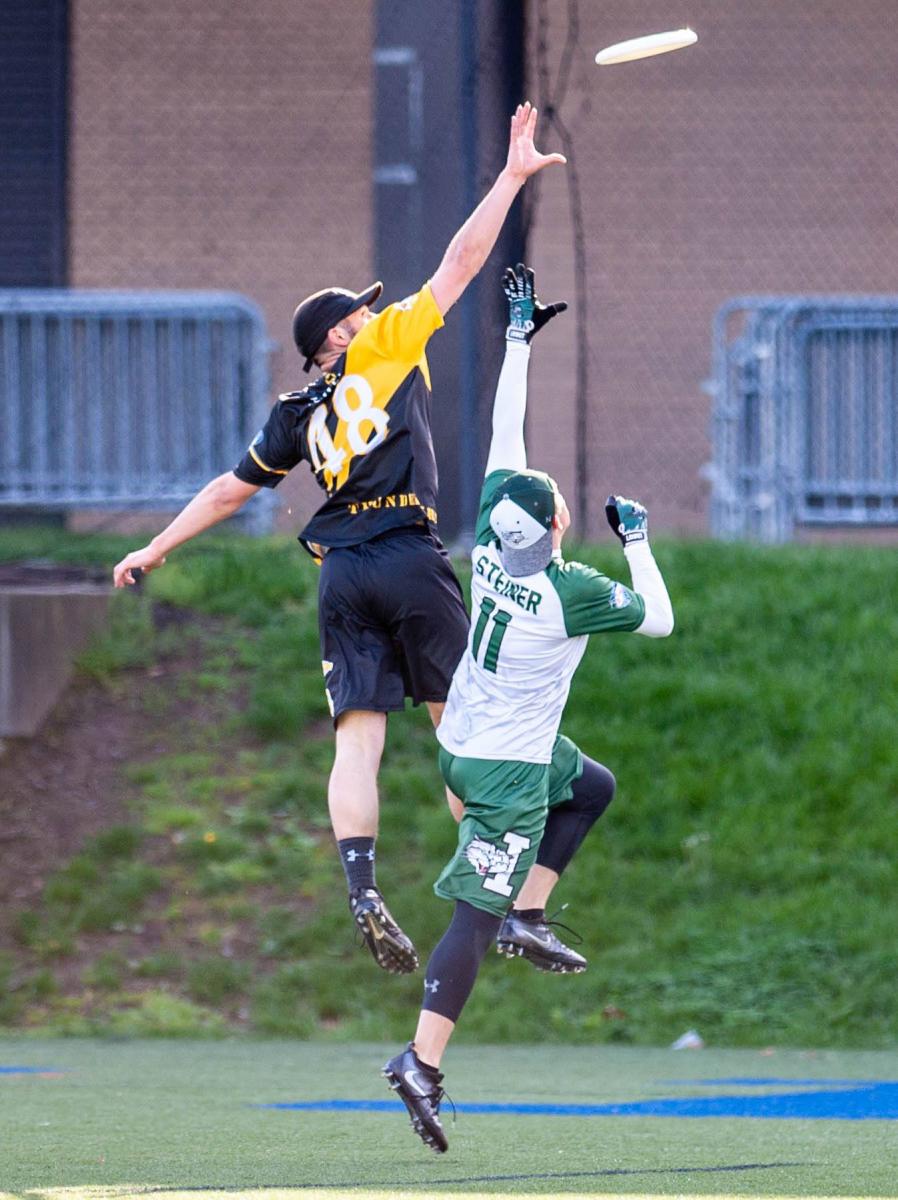 JT: I try to write as often as I can. Journaling has been a powerful method of reflection in my personal, professional, and ultimate lives. I'll occasionally write short essays on things I'm passionate about, but don't really share them. I also keep up with European football, mainly the Premier League. You can find me in the offseason at Piper's Pub on Saturday mornings rocking a Trent Alexander-Arnold jersey.