Disc In: A Chat with Jaret Meron | AUDL
Skip to main content 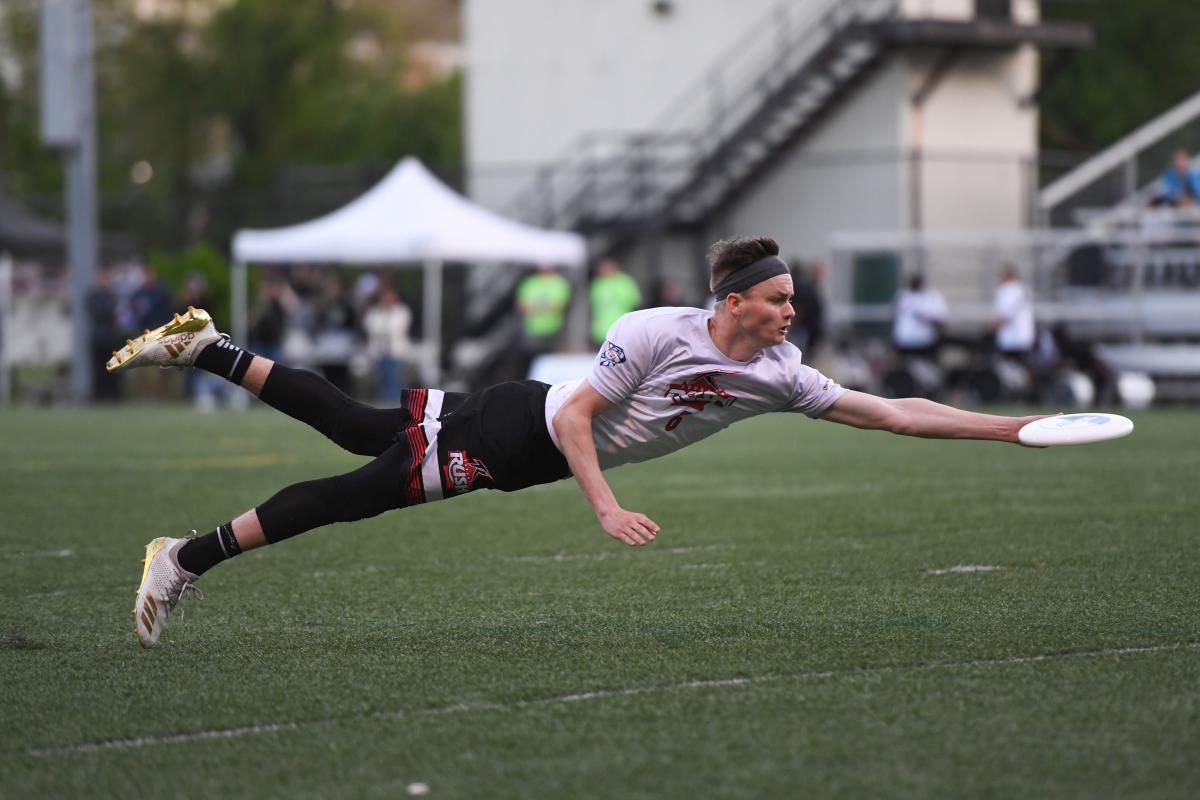 Jaret Meron cannot recall exactly when he became the primary puller for the Toronto Rush. Perhaps he’s just being humble, because his former teammate and coach, Sachin Raina, remembered the day vividly. 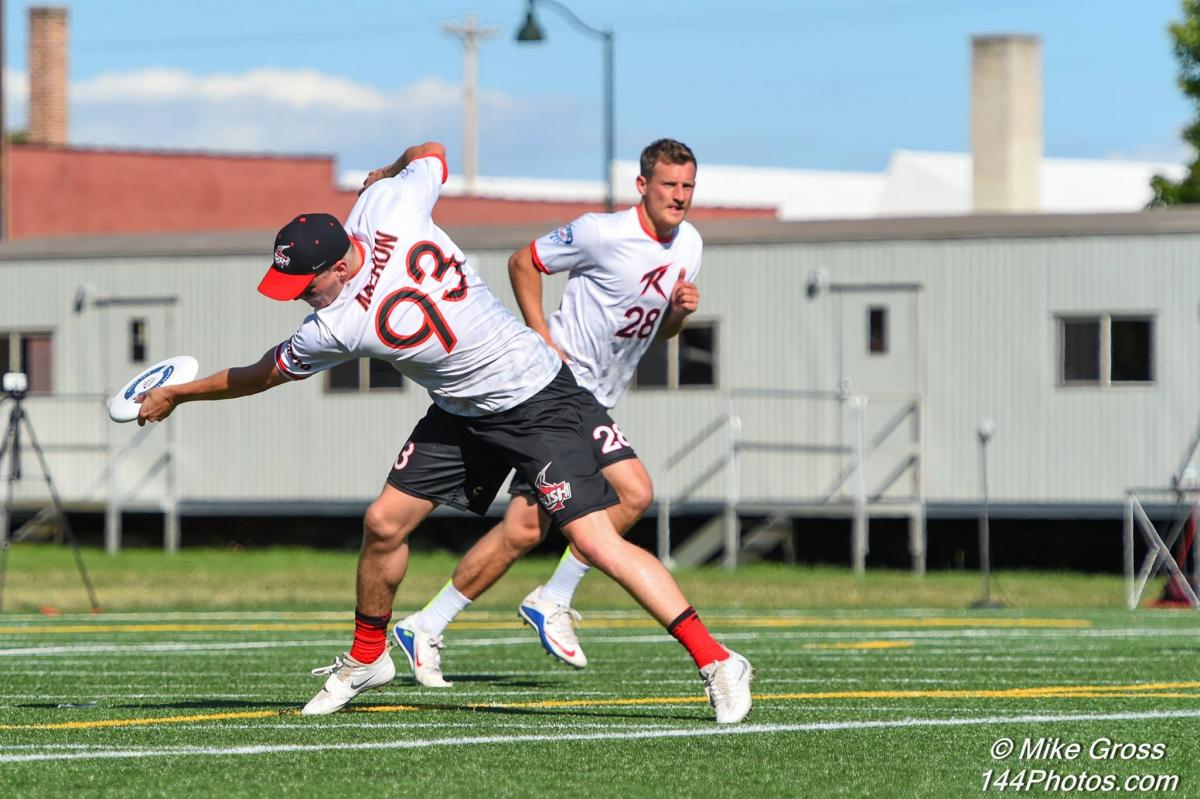 “Having someone drop your pull can usually be chalked up to luck; anything can happen once. To have it happen again, on the very next pull no less, suggests there may be more than just luck, but still, it’s not totally convincing. Fast forward to 35-17, when it happened again! By the end of the game, Jaret had 16 pulls, three of which were dropped. Everyone else had 23 pulls, 0 drops. If you throw that in a Chi Square analysis, you’ll actually get a statistically significant difference. So to both the old school purist and the analytics geeks, Jaret was a more effective puller than everyone else.”

Before that day, a lopsided 37-17 rout for the Rush, Meron had launched 26 career pulls in 15 career games. Since then, he has uncorked 667 pulls in 58 games. Whether the vicious spin on his powerful lefty backhand instigated a trio of drops that day against the Phoenix or it was just a coincidence, either way that date remains a turning point in Meron’s six-year career. Since 2016, he’s launched 644 pulls in 55 games over the past four seasons. In that time span, across the entire league, only Madison’s Peter Graffy has thrown more.

“The guys entering stats that day had no idea how to enter ‘dropped pull’ in ultianalytics,” added Raina, “so they just kept crediting him with Ds. So his four Ds are actually one D and three pulls dropped.” 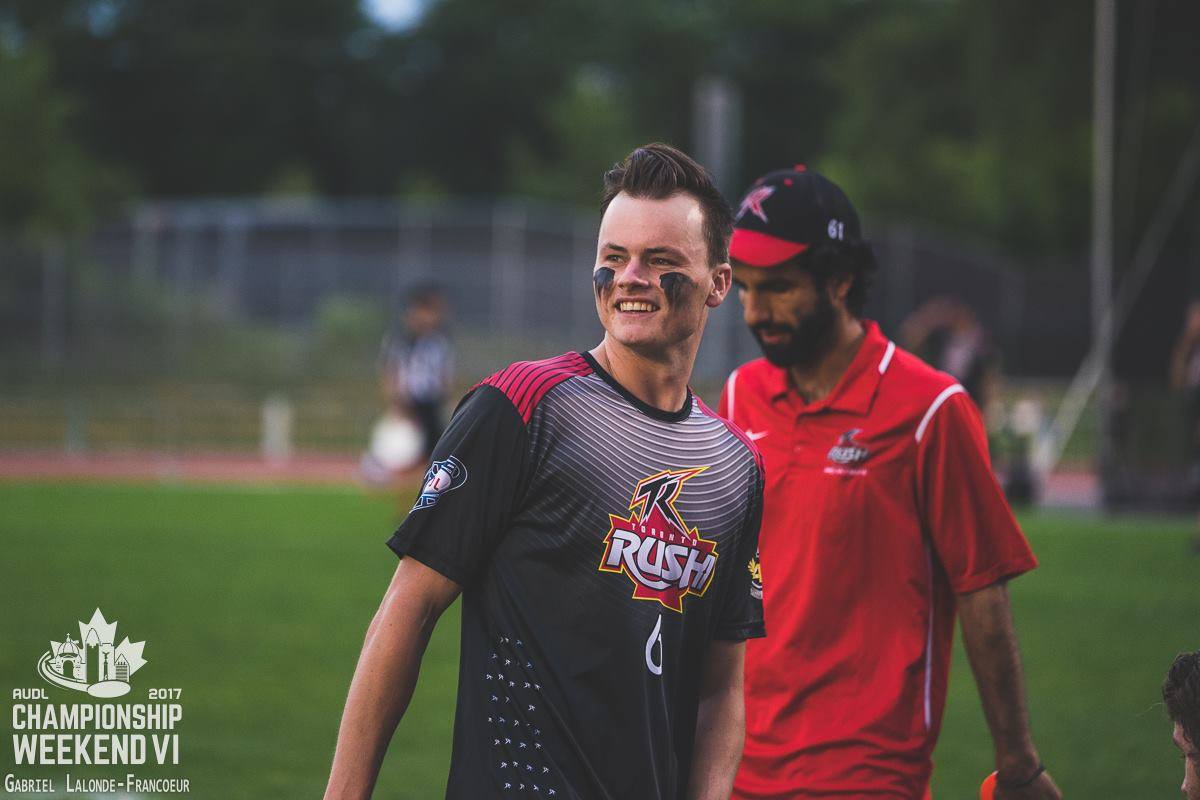 Statistical discrepancies aside, pulls have been a long overlooked aspect to a team’s defensive game plan, something that Meron has embraced and valued. While the most common pull—and easiest to receive, according to Raina—is a floating inside/out backhand, Meron has put considerable time toward refining his outside/in backhand pull, which usually arrives with a sharper trajectory and consequently is tougher to catch. Add in the fact that he’s a lefty and there’s a strong case to be made that Meron’s pulls are, if not the highest quality, certainly among the league’s elite.

I connected with Meron in late June to ask about his pulling prowess, his athletic background, and his family, which once had three siblings all playing for the Canadian delegation at a World Championship event. The conversation, which occurred just hours before the AUDL officially cancelled the 2020 season, has been edited slightly for clarity.

Evan Lepler: Firstly, how are you and what has your life been like since the world shifted so dramatically in mid-March?

Jaret Meron: I think I'm doing pretty well by 2020 standards! Thankful to still be working (from home) and staying healthy. My life is definitely drastically different from the norm right now. But like most people, I've gotten pretty accustomed to the "new normal" at this point. But on the plus side, my golf game is pretty hot right now!

EL: What have you done to try and stay in shape over the past few months? And if the season started tomorrow, what percentage of the best version of yourself would you estimate you'd be?

JM: Thankfully with the Rush we get to work with a world-class trainer in Mike Haddock. So I've been trying to keep up with his at-home programming, but I've also been doing a ton of cycling which has been a nice way to get some much needed fresh air and keep up the cardio. If the season started tomorrow, I'd say I'm probably at about 80 percent. You'd probably see almost 100 percent in the first half, but the second half, It might be ugly. 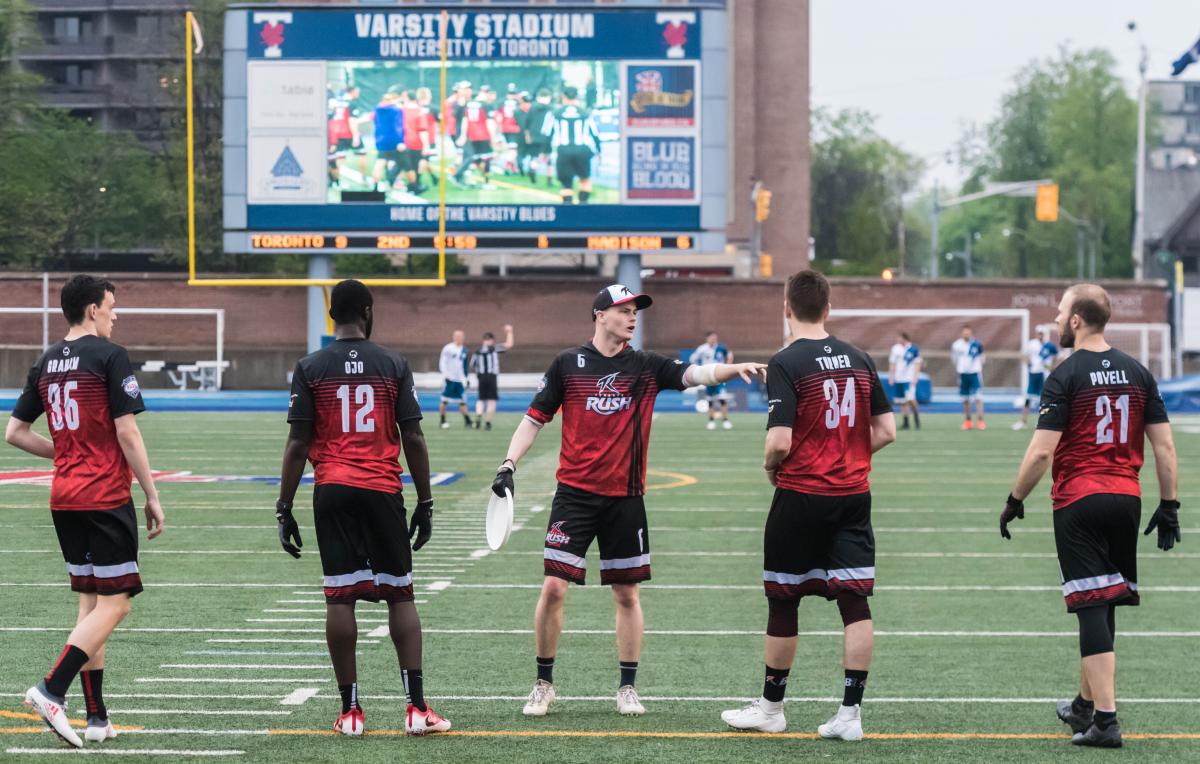 EL: So this chapter of the "Disc In" series is focusing on lefties, who are obviously a rare and occasionally bizarre-breed. I say bizarre because of all of the folks who, say, throw lefty but write righty, or have some other baffling combination of ambidexterity throughout their lives. Where do you fall on the spectrum in terms of lefty specialization? In other words, can you share whether you're lefty for everything, or how you divvy up your handedness for your life activities, writing, eating, throwing, etc?

JM: I’m definitely more of the bizarre breed. I write with my left and always throw with my left. But I'm right-footed, I hit with my right in volleyball, and play golf, hockey, and bat right-handed in baseball. All over the place really.

JM: In general life, I'd have to call it a disadvantage, or at least an inconvenience. The lefty inconvenience to end all lefty inconveniences has got to be smudging any kind of ink/pencil/chalk as you're trying to write. In ultimate, however, it definitely poses a couple of advantages. The biggest advantage in my book has to be when the weather gets bad. Especially playing in the freezing, wet, windy Canadian fall, having the luxury of getting forced backhand more often than not is huge. 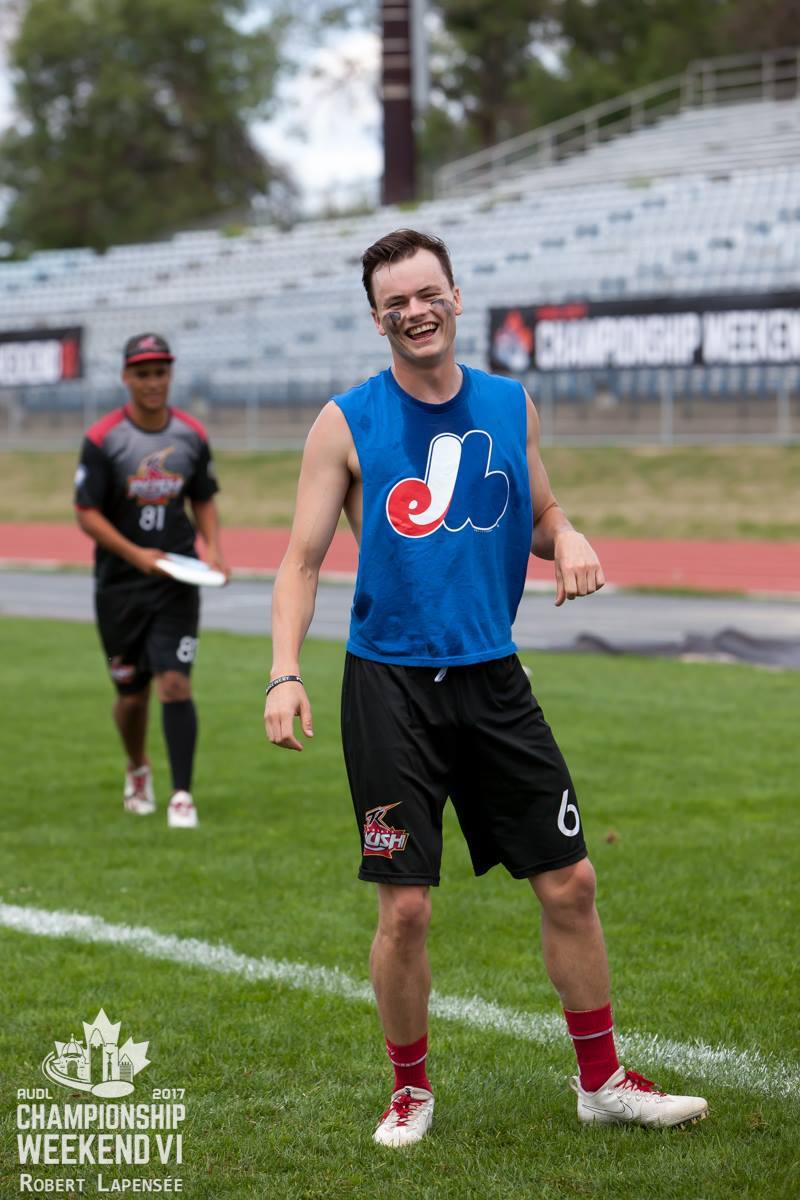 EL: Moving away from the lefty conversation, can you quickly share your general narrative about what sports you played growing up, how you discovered ultimate, and when your passion for frisbee really took flight?

JM: Like most Canadians, I learned to skate not long after I learned to walk, and started playing hockey at around age four or five. I've been obsessed with sports for as long as I can remember, but hockey and soccer were my primary sports growing up. I got introduced to ultimate just before high school. My brother and sister were playing with the high school team and had just started playing for DIRT, the local touring junior club team in Toronto, so they would always drag me out to the park to go chase down their throws. From the very start, I've always found the flight of a frisbee to be particularly mesmerizing, so it was easy for me to throw myself into the sport. My first taste of competitive ultimate came in the ninth grade when I made the high school team. We had some really great alumni including my brother Josh, sister Jordan, and Rush teammate Cam Harris, so it was a great place to learn and develop as a new player.

EL: Having led the Rush in pulls for four straight seasons, I'm curious to ask about this aspect of your game and role with the team. Firstly, have you always been a good puller or was it something that you developed? Secondly, how have you gone about improving that specific skill? And thirdly, how has being a good puller shaped your role with the Rush in recent years?

JM: It’s funny. To be honest, I have no idea when the shift happened where I became "the guy" as far as pulling for the Rush. I've always been known for my hucks and ability to throw far, but I definitely wasn't a natural when it came to pulling. For me, the improvement came by focusing on finding a balance between distance, hang time, and accuracy. Most players can throw it the length of the field on a rope, or get 10 seconds of hang time but only make it to the brick mark, or throw it 80 yards out of bounds. But the great pullers are the ones who can consistently get distance and hang time while also landing the disc in the most advantageous position for your defensive strategy—which sometimes means OB! As far as how it's shaped my role with the Rush, I think it definitely gives you that extra bit of job security. Especially as the conditions get worse, being able to consistently get a strong pull in bounds will always earn you a spot on a d-line. Like anything in life, sports are about finding your niche and dominating it, so for anyone looking to make an AUDL team, don't forget about this niche!

JM: This is an easy one. My best, and favorite throw is definitely a backhand huck. Although I've been in the lab all offseason working on my hammers, so stay tuned!

EL: Having mostly played defense throughout your career, I'm curious to ask who have been the most difficult players you've had to guard over the past six years?

JM: There are a ton of guys who have made my life really hard as a defender over the years. Alan Kolick is one guy who used to give me—and our whole team—fits with his quickness and unguardable lefty breaks. Another guy who sticks out is Ben Katz from the Empire. He doesn't necessarily dominate you with speed or strength, but he's one of the most cerebral players I've ever played against and always has a knack for being in the right spot and capitalizing when you're not.

EL: What’s it been like to represent Canada in World Championship events that your brother and sister were also competing in? How have your parents handled the dynamic of all three Meron siblings playing in the same time slot on opposite ends of a large field complex?

JM: I’ve played for Team Canada three times: U20 in 2012, U23 in 2013, and U23 in 2015. We had the amazing experience of getting to all play for Team Canada at the U23 World Championships in Toronto in 2013—Josh and I on the mixed team, Jordan on the women's team. Thankfully, my parents are well-trained for this, having spent the majority of our childhoods driving us all around from one tournament/game to the next. But they've developed a pretty good system of divide and conquer, while providing each other with text updates of the game they can't watch. Our parents really couldn't be more supportive of our ultimate careers, and they are well known in the Canadian frisbee community for their fandom. It's a great dynamic when they're able to make it out to our games. 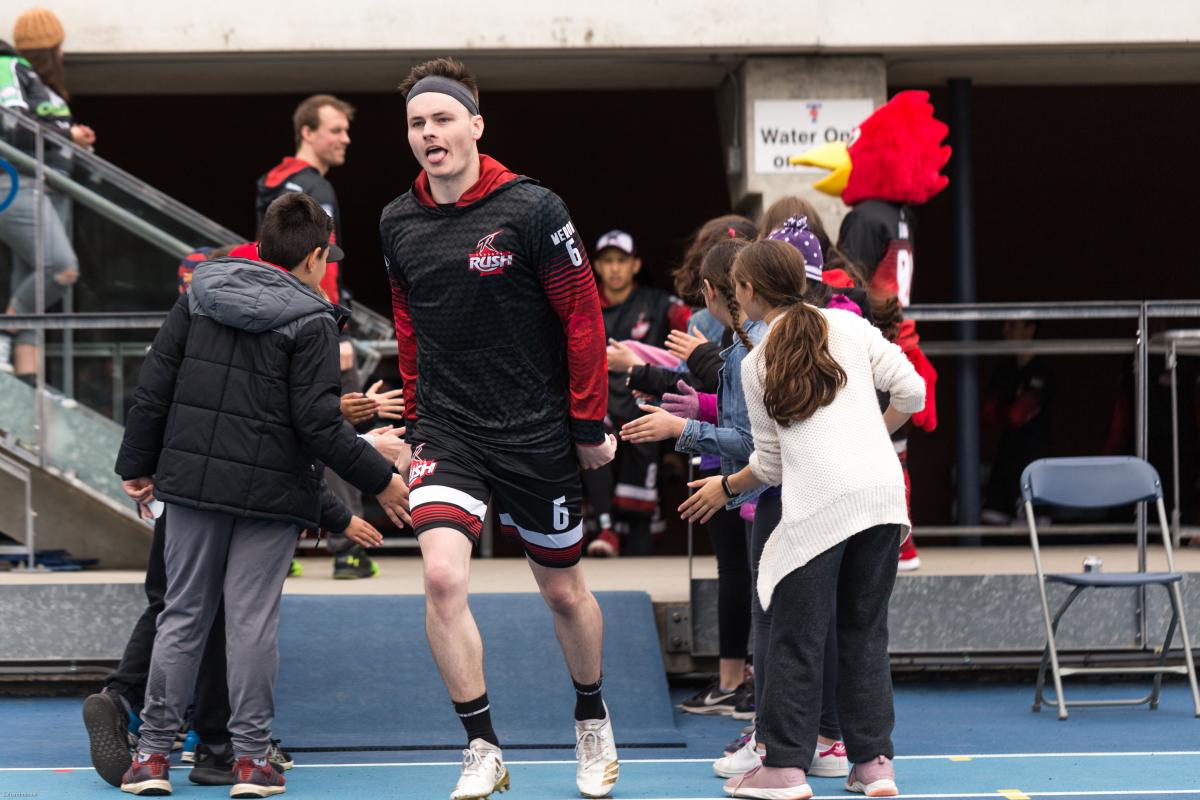 JM: This is a really difficult question because I feel like there are a number of games for college, worlds, or the AUDL that have all been really meaningful to me. But if I HAD to pick just one, it would have to be the 2017 AUDL semifinals against Dallas. We were coming off of an embarrassing loss to Dallas in 2016, and we knew that we couldn't let that happen again. I've never seen our team peak emotionally, mentally, and physically like we did for that game, and our energy was just insane. Shoutout that Montreal crowd!

EL: And lastly, who's your favorite lefty, and why?

JM: I’m going to cop out a bit on this one and split it between two of my teammates, Jason "Sparkles" Huynh and Bretton Tan. They're the other two guys who make up our southpaw d-line backfield trio. Both of them are lethal with their give-go's and really drive a lot of our d-line offense. It helps that they're also two of the nicest guys you'll ever meet. Shoutout those young bucks! And if we're going non-ultimate, I'll take regular season Clayton Kershaw.