Disc In: A Chat with Harper Garvey | AUDL
Skip to main content 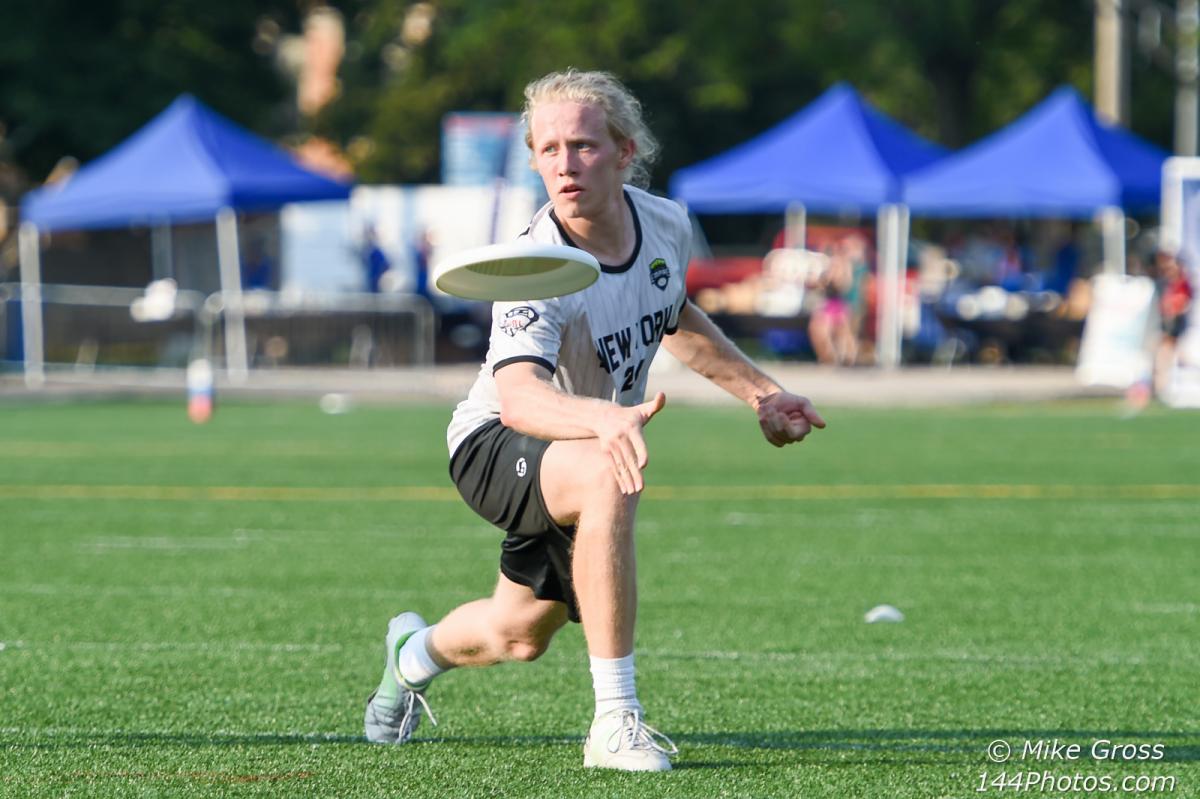 Harper Garvey joined the New York Empire in 2017, a relatively unknown 23-year-old product of the Minnesota youth scene and D-III Knox College. He had earned a bit of buzz during his time anchoring Knox’s ultimate program, pacing the field in assists at D-III Nationals in 2016, but going from that tiny school of fewer than 1,500 students to playing for New York in the AUDL felt like a massive leap. And though there were some bumpy moments early in his career, his dynamic throwing abilities also immediately redefined the Empire’s offensive potential.

As a society, we certainly focus more on ‘Old Takes Exposed,’ but let’s give Nathan Jesson credit for the clairvoyant insight that he scribed for Ultiworld on April 11, 2017, three days after Garvey’s debut, in which he threw six assists in a 22-17 loss to Toronto: “Harper Garvey is not going to win the MVP. He’s not the best player on the New York Empire. But he’s bringing the Empire to places they haven’t been before.”

Jesson did not project an championship, but elaborated how Garvey’s throwing style, even in just one game, had made New York’s offense more exciting and dynamic. A few years later, of course, the Empire are AUDL champions, with Garvey serving the critical role as the team’s primary center-handler.

He completed 95.4 percent of his throws in 2019, up from 89.8 percent in his rookie season, while increasing his scoring tosses from 33 in ’17 to 53 in ’19. In last August’s title showdown against Dallas, Garvey sliced and diced the Roughnecks defense with his precision, launching perfect hucks and dismantling double-teams with his wide array of disc distribution. New York won the game 26-22, with Garvey recording seven assists and six additional hockey-assists. He also scored two goals and got one block.

As Jesson previewed, he may not have been New York’s best all-around player, but he played a critical role in launching the Empire to heights the franchise had never previously experienced, doing so with a confident flare that enabled him to fit perfectly with the team’s all-world athletes that surrounded him on the O-line. And just as often as folks have been amazed by an unbelievable athletic maneuver from Ben Jagt, Jeff Babbitt, or Jack Williams, other members of the Empire have been mesmerized by Garvey’s crafty antics to deliver the disc exactly where it needed to be.

“I don’t know how Harper does what he does every time he steps on the field,” Jibran Mieser, Garvey’s teammate since 2018, marveled last summer.

That’s a common sentiment on the Empire sideline, though they have gotten used to his consistent wizardry, and even have come to expect it. Gradually over the past three years, his teammates have embraced the belief that the disc, and the accompanying decision, almost always belongs in Harper’s grasp. This growing trust is reflected by this statistical progression: in 2017, he finished 27th in the league in completions; in 2018, he was sixth; and last year, he was second, only 10 completions shy of Chicago’s Pawel Janas, who has led the league in this category three years in a row.

Still a few months shy of his 27th birthday, with a few years of polish, improvement, and growth behind him, Garvey is presumably just on the verge of his prime, an anchor to his team’s offensive success rivaling any other volume handler in the league. The former D-III standout has fully established himself as a top-level pro, and it’s certainly intriguing to image what’s next.

For the penultimate Q&A in this two-week Disc In miniseries on some of the league’s greatest throwers, I caught up with Garvey to hear about how he’s handling life in New York during the pandemic and to ask about his development arc as a distributor throughout his career. The conversation has been edited slightly for clarity.

Evan Lepler: Firstly, how are you and what has your life been like over the course of the past month or two?

Harper Garvey: I’m good! And all things considered, life is pretty good too. Things are more stagnant these days, but that doesn't bother me much. I've been watching stuff I've been meaning to, listening to music and playing video games with a bunch of the New York ultimate guys in the evenings. A number of us bought PlayStations so we could play together and it's been really fun. It's helped combat feeling too removed from the social aspect of the team.

EL: Living in New York, a place that the pandemic hit especially hard, can you enlighten the rest of us who aren't close to the city how things in your new hometown have been recently?

HG: Covid has been pretty all-consuming here. I have roof and backyard access, but outside of that I've left the house three times in the last two months. I've been a bit extreme in my quarantine, but most people I know are taking social distancing and quarantine very seriously. Police are patrolling parks and public spaces. I live with my teammate Evan Padget, and one of the times I left the house, we drove to Times Square and through Manhattan, it was pretty surreal seeing how empty things were. I'd be surprised if the city will be that empty again in my lifetime. I know a few people working in hospitals and speaking with them has been harrowing. A lot of death and a lot of sadness.

EL: From an ultimate standpoint, what types of things have you done to try and stay in shape and keep your throws sharp?

HG: I haven't thrown in over a month. But you know what they say, it's like riding a bike. Physically I haven't been doing much either. I pulled my groin at WUGC tryouts and hadn't been playing going into Covid era, so I've used this time to rest. It's also a little tough when the season start is so uncertain. I've been more focused on maintaining the social and team elements of the sport. Empire recently participated in the virtual TEP tournament, [the New York club team] PoNY has a weekly film club, and as I mentioned prior we've got about a dozen people playing games online together pretty frequently. 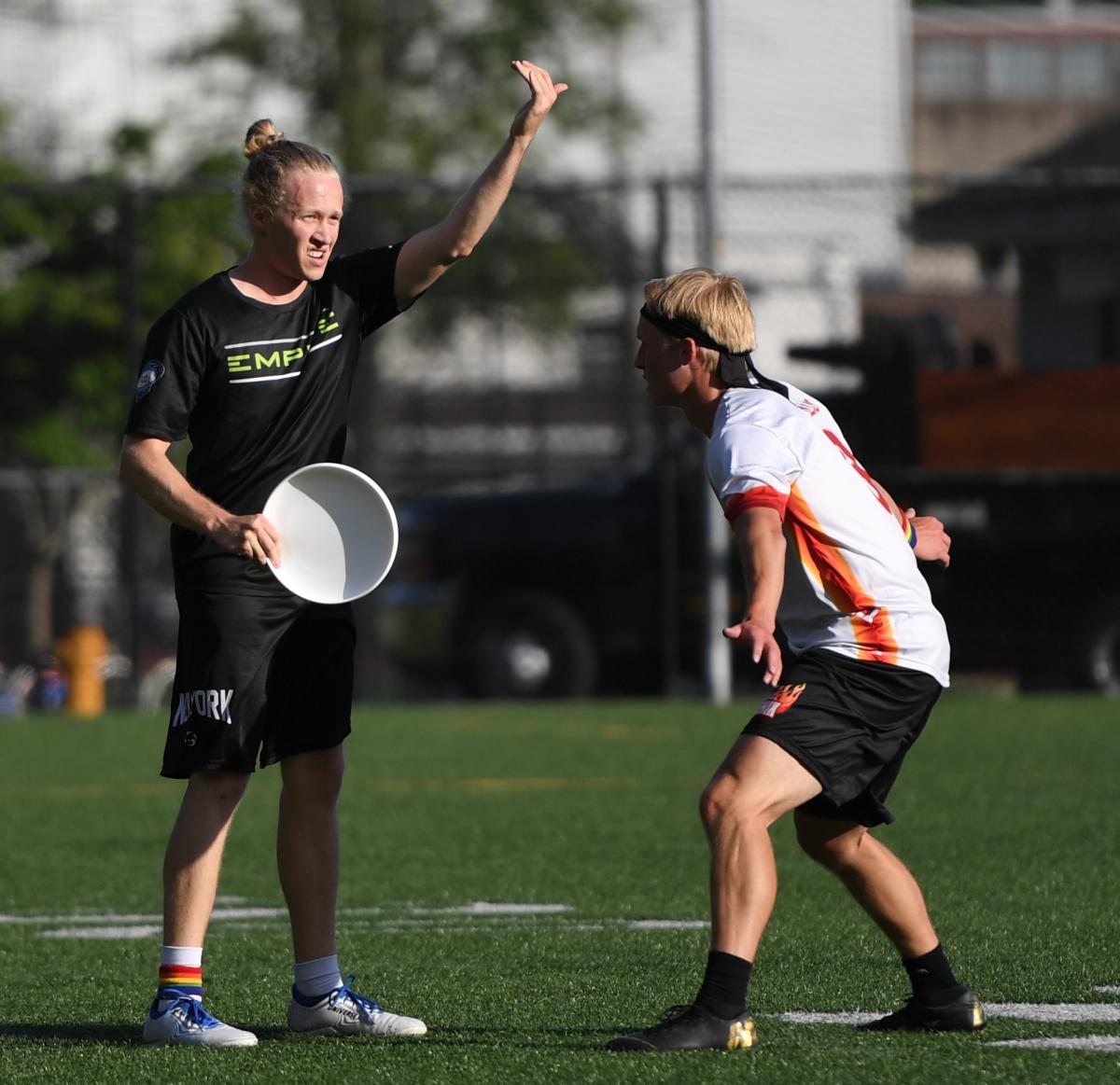 EL: While everyone who steps on an ultimate field needs to throw, catch, and defend, your playing style and abilities have certainly labeled you as a thrower. When do you think you first gained that distinction from your teammates and/or opponents on the field and how has that characterization impacted you as a player?

HG: For me it happened early. My fourth-grade teacher played ultimate and we used to throw at recess a lot; that's where I picked up the basics. Then my first ever game in high school I was told that if the disc hit the ground I should be the one to pick it up. I barely knew the rules and I remember being totally lost, but that's how it all started. I then spent all of high school developing as a thrower. I was a little more well-rounded, used to get some Ds, score some goals. But I was always a thrower. That was the case in college, club and pro. I like cutting downfield, but I've probably started downfield 15 points in my life.

EL: Aside from the simple reply, "I practiced a lot," what types of things did you do early in your career to develop your throwing skill? Were there any key coaches or other mentors who helped mold your abilities with the disc, or were there any high-level throwers (on your team or on a top team that you watched) that you viewed as role models and aimed to emulate?

HG: A lot of things aligned for me. My dad knew how to throw, and all through elementary and high school I had teachers that had experience playing ultimate. Jake Henderson, [who coached the USA Mixed National Team], coached my high school team. Sam O’Brien, [who played for Carleton College and with the top Seattle club team Sockeye], was my high school art teacher. There were a lot of people in my life that provided me with guidance and helped me push myself. I think the main thing though, was that I just loved throwing, and I still do. It's one of my favorite things to do. I know you said not to say 'practice a lot,’ but that's what I did. I threw almost every day. By the end of middle school, the Caballeros had moved in next door to me. There were four of them, and they all played ultimate. My sister played, and by the end of high school most of my closest friends were playing too. We lived pretty close to school so we would have people over almost everyday and we would throw or play five hundred. I just got a lot of reps, and I never stopped enjoying it. 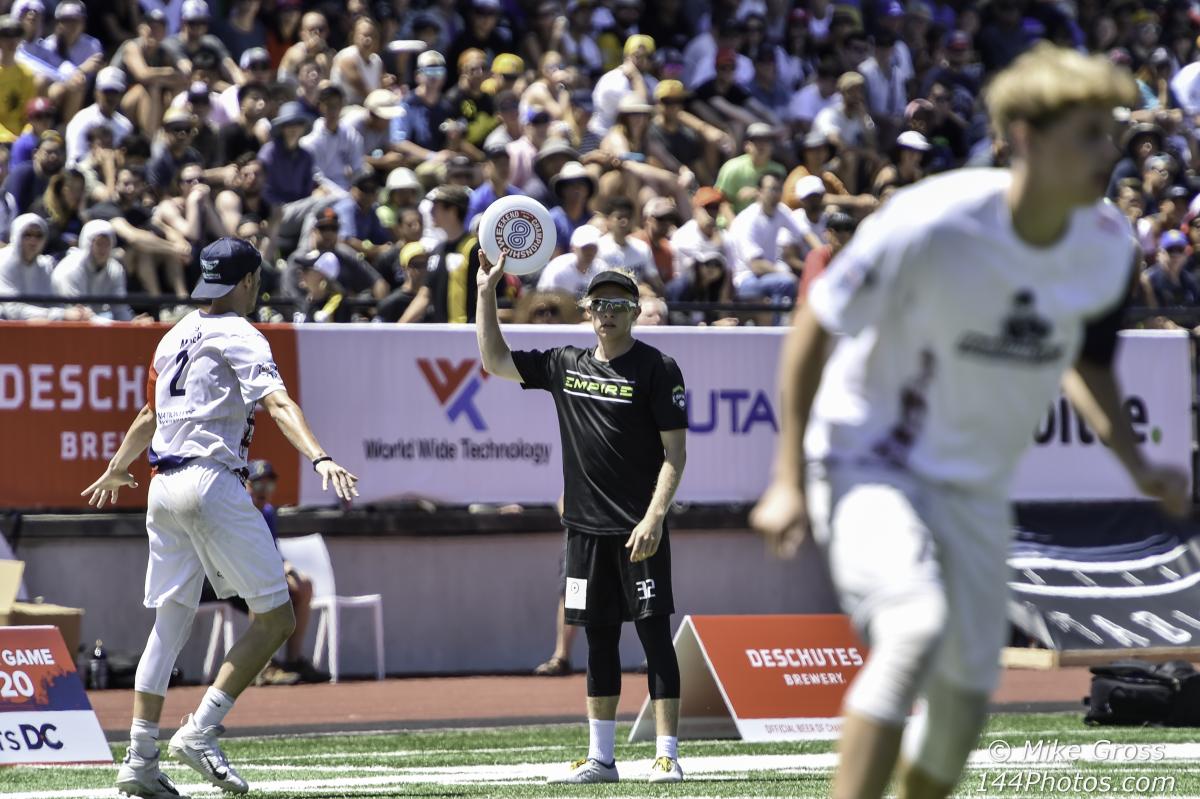 HG: I think I'm most consistent with my forehand, I most enjoy throwing backhands and compared to other people I suppose my hammer is my strongest throw. Having not thrown in a month, I'd love to throw a backhand right about now.

EL: Putting you on the spot--not intending to get the rest of your teammates mad at you, though it may be inevitable--who are your three favorite receivers to throw to, and why?

HG: Hard question! I think Jeff [Babbitt] might be the biggest target in the game. So he's pretty easy. He doesn't have to be open. Ben Jagt is similar and loves making plays, and Jack [Williams] is smooth and intuitive. He fills spaces well and even though he sometimes complains I throw it "too soft" for him, I love playing with him.

EL: If a younger ultimate player asks you for advice, what's your typical response, aside from the obvious "practice a lot"? Can you share one trick/suggestion about either footwork or grip or release-point or mentality that you've used to be successful, something others aspiring to 'throw like Harper' may be able to learn?

HG: There are all sorts of grips, footwork and form combinations that work for different people. You can pretty much name a quirk and I could name a good thrower that makes it work. Mentality is more interesting to me. I've always tried to make the most of my throwing time. Whenever I'm throwing I think through exactly how I want the throw to look. Speed, edge, location, touch, then I throw it and assess. If I did it well, okay, try something new, if not throw it until it looks the way it's supposed to.

EL: Finishing with a couple of life questions, what's the most delicious thing you've cooked during the pandemic?

HG: Evan and I got a make-your-own-pizza-kit, and we made 4 styles of pizza, a wet one, a burnt one, a normal one and a cheese one. Outside of that, I haven't done much cooking.

EL: And lastly, aside from ultimate, what's something that you haven't been able to do during the quarantine that you're most looking forward to doing again when (if?) life returns back to normal?

HG: Hanging out with my friends! I miss them. I also miss New York. I can't wait to go out and about in the city. I miss the way it smells and feels in the summer. 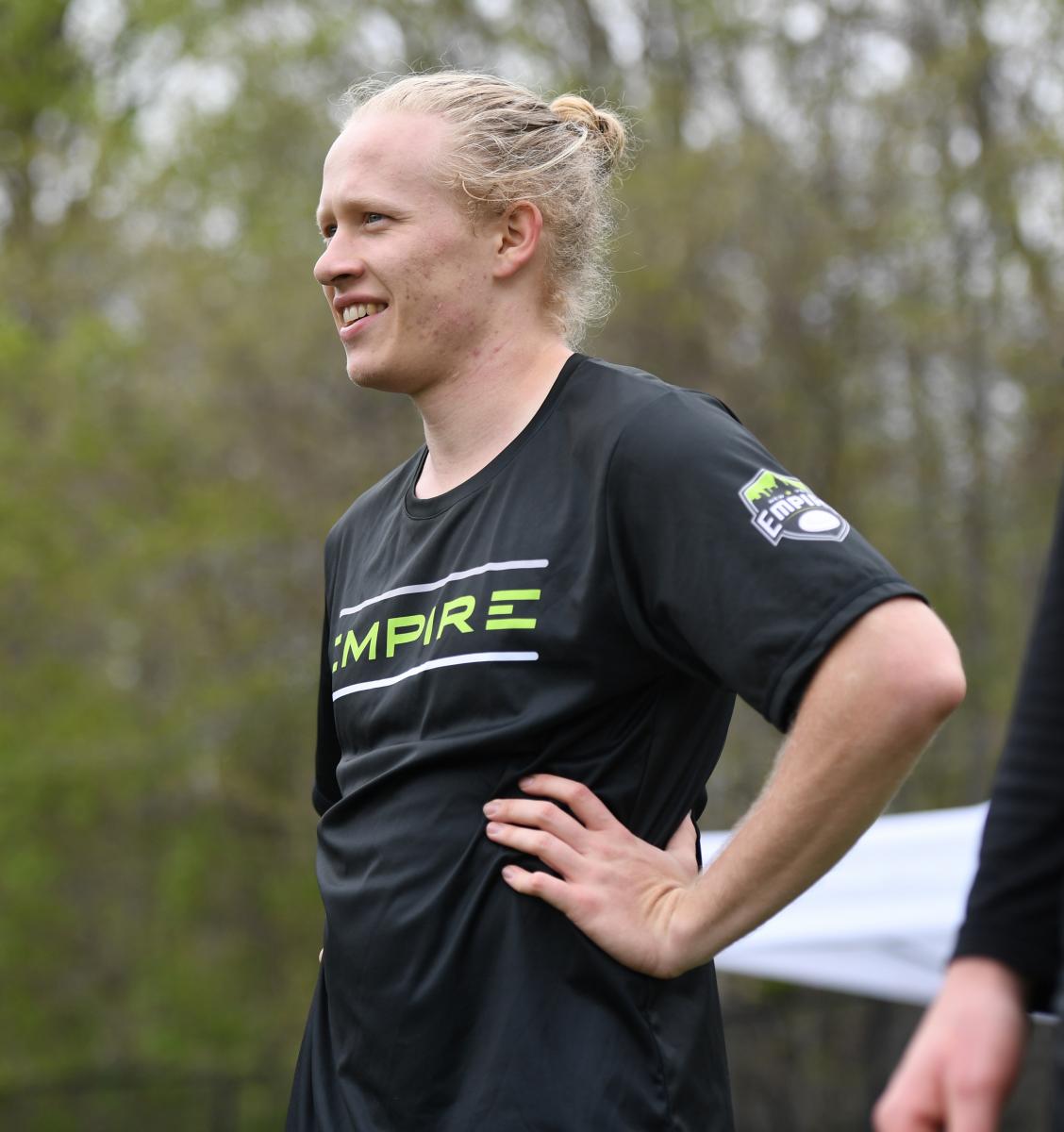