Disc In: A Chat with Calvin Brown | AUDL
Skip to main content 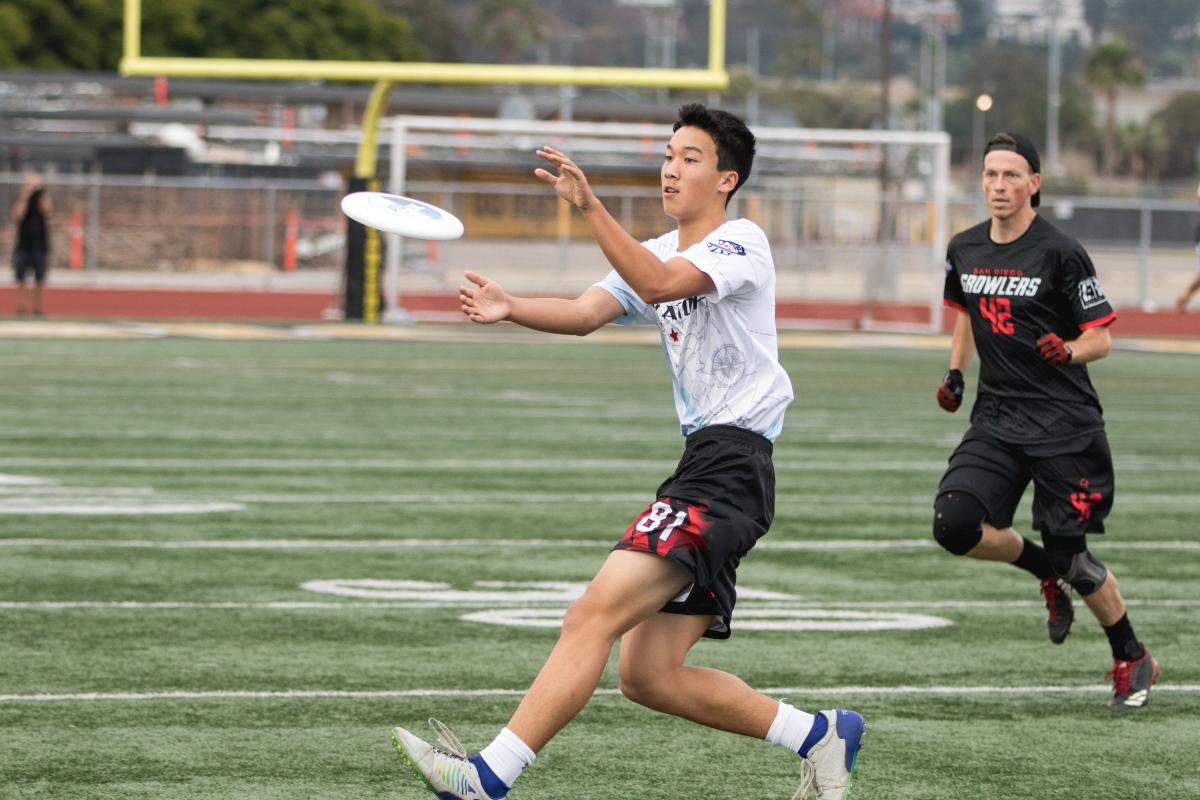 Typically, when you join a new team, it can take some time to prove yourself worthy of your teammates’ trust. That quest can take days, weeks, months, or even years, especially if you are young without previous experience at that level. It’s a special breed of player that arrives with confidence, charisma, and the ability to take charge immediately, and all indications are that Calvin Brown is that type of guy.

After playing a key role in a Youth Club Championship in 2018, Brown really stormed into the sport’s top teenager conversation last year as a freshman at Cal Poly-San Luis Obispo, where he helped pilot the program to the semifinals at College Nationals. Though the squad was full of key upperclassmen, no individual on the team tossed more assists at Nationals than Brown did. Perhaps even more impressively, the Irvine, CA-native dished more dimes than any other freshman in the men’s division at Nationals last year. Over the course of the past decade, there’s been just a handful of freshmen who’ve assumed as much responsibility on their college teams as Brown, who’s sophomore year was unfortunately halted early this spring because of the current pandemic.

Clearly, Brown was no ordinary rookie when he ascended to the professional level in 2019 with the Los Angeles Aviators. Formerly a practice player for the organization, team leadership added him to the active roster for the first time on May 11, 2019, and in similar fashion as he did with his college team, Brown seized significant responsibility immediately. In his debut, he registered the second-most touches on the team, completing 27-of-30 throws on the Aviators’ O-line. A little over a month later, he delivered a virtuoso handling performance by going 43-for-43 with seven assists in a victory over San Jose. At just 18-years-old, Brown had command of his team’s offense, not in high school or college, but at the AUDL level.

That’s not to say he was perfect throughout the rest of the season. There were certainly some teachable moments in the Los Angeles-San Diego playoff game, in which Brown tallied two assists and two goals but also made some throwing decisions that he wanted back, the type of common mistakes for young players adapting to the speed and precision of the next level. Still, his teammates raved about his poise, composure, and the amazingly bright future that he unquestionably possesses in the sport.

To cap the series on transformative teens who’ve already made their mark in the AUDL, I caught up with Brown, who will turn 20 in November, about how he’s adapted to the strange new circumstances, his first AUDL season, and what’s keeping him busy while he waits, like the rest of us, for ultimate to return. The conversation has been edited slightly for clarity.

Calvin Brown: I’m doing pretty well.  I am staying in San Luis Obispo for spring quarter.  California has issued a statewide shelter-in-place order, so there isn't a lot of activities to do, but I've actually been busier than ever because I started a part-time internship that I have to juggle with class. SLO is pretty empty right now because a lot of students have gone back to their hometowns.

EL: Presuming you've shifted to experiencing your sophomore year of college remotely, how would you characterize how that has gone so far? What's the typical day like and how jarring has it been to make the transition from on-campus student to what you're doing now?

CB: I am a computer science major, which makes online classes less of a struggle than some more lab-oriented majors, but I definitely prefer in-person classes. Most days I'm on my computer almost all day long attending class, working, or doing homework.

EL: Ultimate obviously feels somewhat secondary to everything, but I'm definitely curious to ask how your second year playing for Cal Poly had gone thus far and what the emotions have been like handling the realization that this season almost certainly won't reach its conclusion?

CB: My second year was going pretty well. I was really enjoying the season but I don't think I had a super strong tournament this season so I was really looking forward to Easterns and eventually Nationals. I was really upset about the cancellation of the season but I understand that its really the only option at this point. I'm definitely going to use it as motivation for next year. 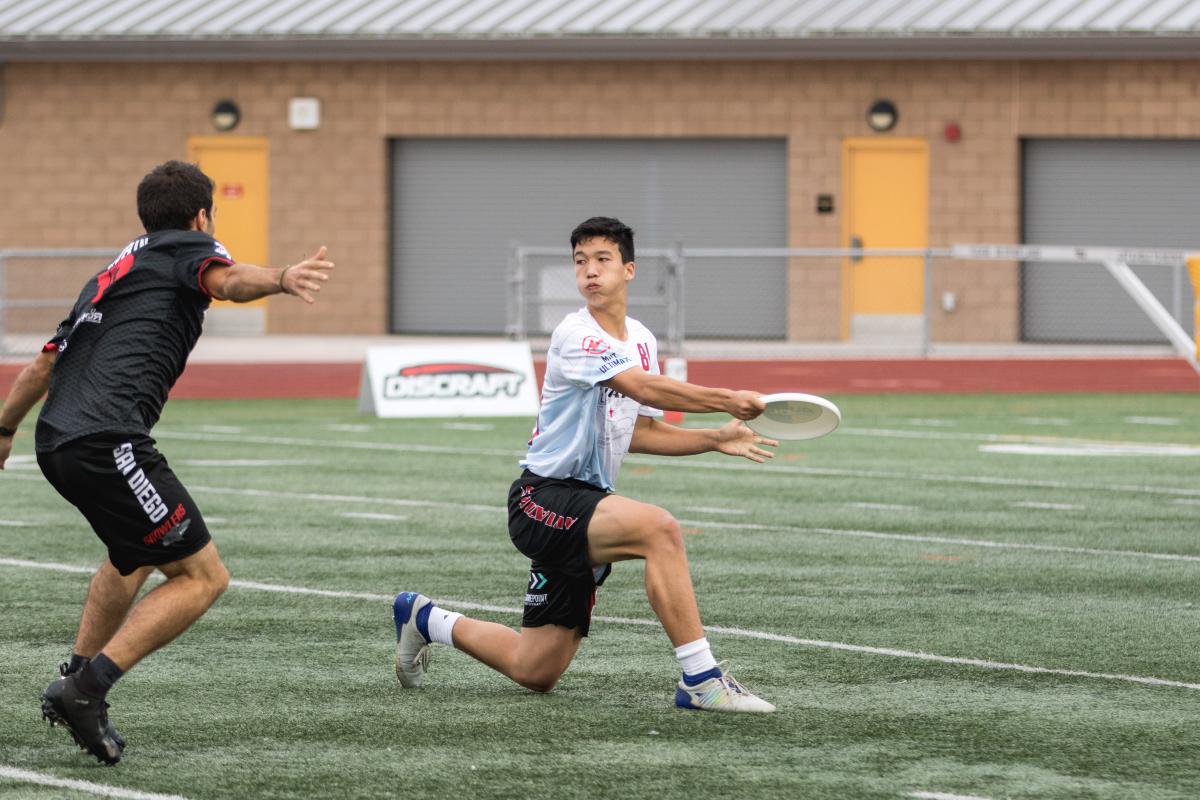 CB: My dad played ultimate, so I've been a part of the community for as long as I can remember. I played pickup growing up and high school ultimate, but the socal youth scene wasn't very big so the competition wasn't great. I ran cross country and played volleyball in high school, although I was not great at either.

EL: It sure has become more and more common for teenagers to make an impact on professional ultimate teams, but I still think it's noteworthy every time it occurs. What are your primary memories from trying out for the Aviators and then learning that you made the team? Were you confident or did you surprise yourself through the process?

CB: Funnily enough, I didn't actually go to tryouts last year, KJ [Koo] and I were in SLO and we couldn't get down to tryouts, but Bacon came up for one of our college practices and pretty much threw Aviators reversibles at us and said ‘congratulations!’  We both tried out the previous year and made the team as practice players—we were both too young to play—so it wasn't much of a surprise last year, especially considering the roster turnover on the Aviators.

EL: You made your AUDL debut for the Aviators on May 11, 2019 against San Diego, which interestingly was still a couple weeks shy of your first time playing at College Nationals; were you nervous going into that game? Any memories from that day you're especially proud of or humbling "Welcome to the AUDL" moments that stand out?

CB: I was actually most nervous of getting injured that game because I knew [Cal Poly Coach] Cody [Mills] would've been really upset with me. I was mainly just excited for the game and interested to see what the AUDL was like. I don't really remember the game too much other than I threw a few too many turns and we lost by a few points. I also remember Nate Bridges just constantly talking trash when he marked up against me.

EL: Do you have any favorite ultimate players, either people that you especially enjoy watching or individuals that you try and emulate when you take the field?

CB: I’ve always loved Jimmy Mickle's play-style. Obviously he's not someone that's easy to emulate, but one thing I love when watching him is the way that defenses shift to stop him because they're so scared of him. When I'm playing offense, I try to attack the defense and make them scared of me in the same way so I can open up the field for my team. I've also been a fan of John Stubbs since I saw his famous college semi.

CB: Probably YCC finals from 2018, when we won the U-20 Mixed Division. SoCal really has never been a youth powerhouse, so it felt good to represent and show the country the talent that's there.

CB: I really like board games and video games. Currently, two things that I have a little more time for now in the time of quarantine. My family just had a virtual board game night that was super fun.

CB: My girlfriend is a big fan of reality TV, so I get sucked into a lot of shows like The Bachelor or Project Runway, but I don't know if I would recommend those. I really like Community, and it just got put on Netflix, so that's what I would recommend to people.