Disc In: A Chat With Beau Kittredge | AUDL
Skip to main content 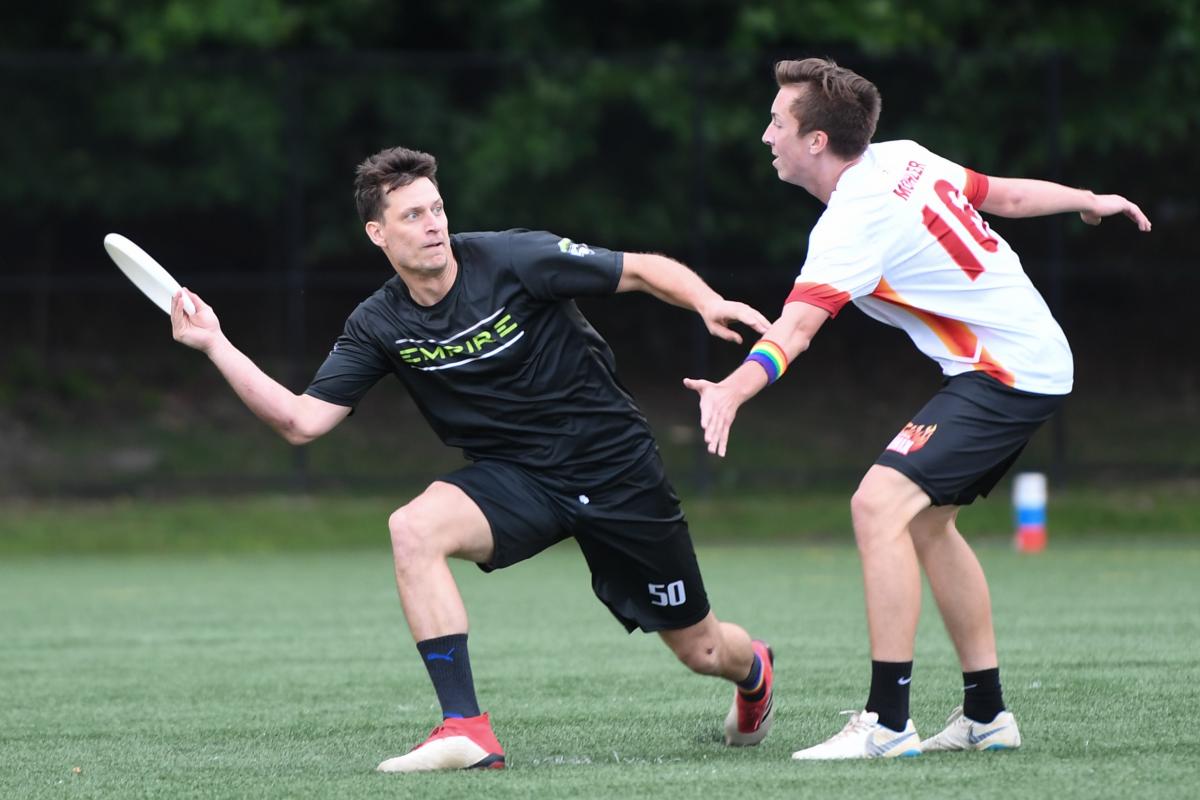 It’s easy to lose count when adding up all of Beau Kittredge's championships.

He’s got five AUDL titles with four different teams in his six years playing in the league, and that’s obviously just the tip of the iceberg of his unprecedented international resume cataloguing his ultimate greatness. He also has been a part of three Team USA World Games gold medal winners (’09, ’13, ’17), two WUGC gold medals representing the country (’12, ’16), and one additional WUCC victory ('10, '14). That’s seven titles on the world stage, and if you also factor in his six USA Ultimate club championships (’10, ’11, ’13, ’15, ’17, ’18) and one college title with the University of Colorado (’04), the total rises all the way to 19 meaningful championships in the sport of ultimate for the phenom from Fairbanks.

And at age 37—he’ll turn 38 in June—the enigmatic and inspiring Alaskan is still grinding through a workout regimen that would probably frighten some other professional athletes. Clearly, his passion to play still burns, fueled by a ferocious desire to continue to compete at the highest level. He will talk about the past willingly and introspectively, but you can tell he’s more focused on the future. I remember asking him once if he could bring his World Games gold medal to an AUDL game so I could see it and perhaps show it to viewers on the air. He apologized and said he didn’t know where it was. It may not have been his direct intention, but the subtle message came across loud and clear: he long ago stopped counting his wins and titles; instead, the championship he most covets is the next one. 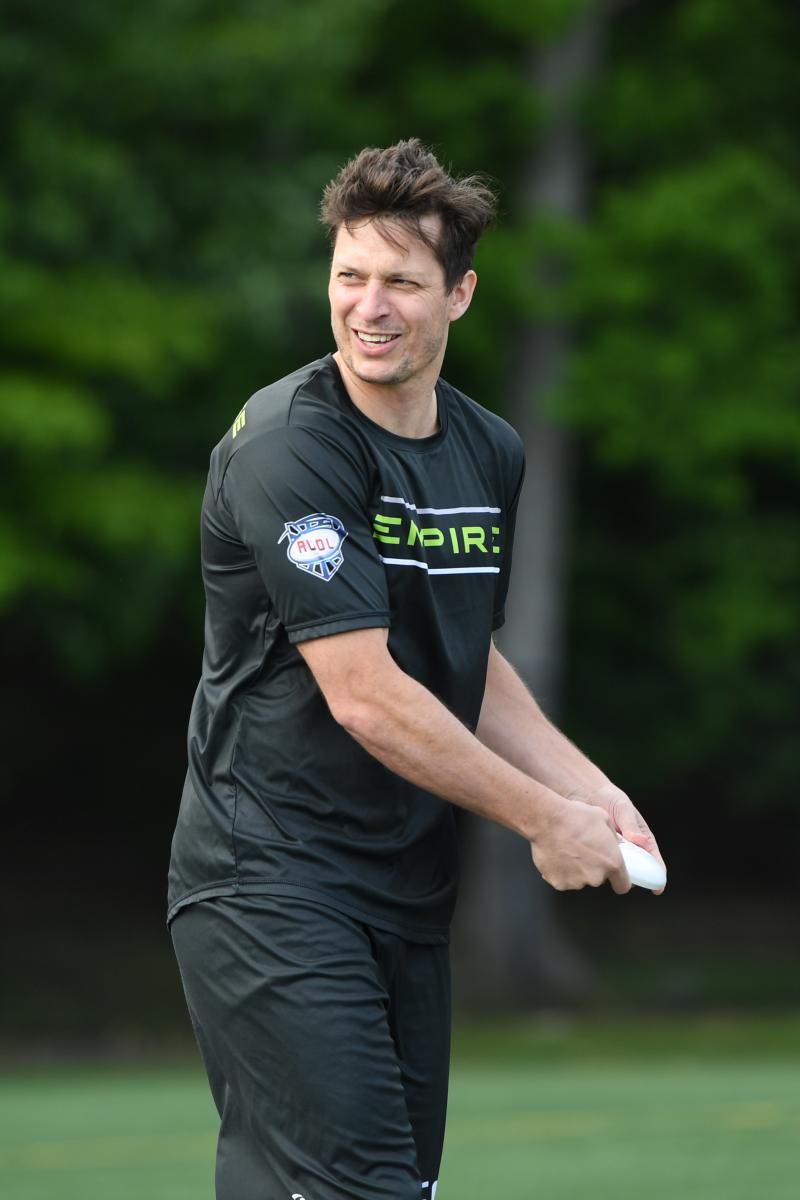 Along with his unprecedented team success, Kittredge is obviously no stranger to individual accolades that accompany his legacy. Named AUDL MVP in 2014 and 2015 as a member of the San Jose Spiders, Kittredge quickly redefined the standard of excellence in professional ultimate when the league expanded to the west coast. His roles as a member of the Dallas Roughnecks, San Francisco FlameThrowers, and now the New York Empire have certainly evolved, with nagging injuries, superb supporting casts, and personal priorities shifting as he’s progressed from his mid-30s to his late 30s. But there’s little doubt that Kittredge can still make the necessary winning play when his team needs it most, and teammates often rave—as 2019 MVP Ben Jagt did in this space last Monday—about how Beau’s effort, mentality, and focus can set the tone before the biggest game of a season.

At the moment, Beau resides in New York City, where in between workouts he oversees Snowsuit Studios, the company he founded that continues to work on the video game that he’s long aspired to create. There have been several iterations of the game in development over the past half-decade, and when asked when the final product might be released, he simply says, “It’ll be released when it’s ready.” Meanwhile, here’s the rest of the conversation I had catching up with Kittredge over the phone last week. The transcript has been edited slightly for clarity.

Beau Kittredge: Well, for a second there it was a little crazy, but now it seems to have calmed down. Everyone seems to be doing their normal things again, at least going out and getting groceries and walking about. Some of the bars are starting to open and allow people to come to the bar to pick up drinks. You can’t go in the bar. I follow the protocols of washing my hands and other than that I don’t do anything different. Oh, I also don’t touch my face. 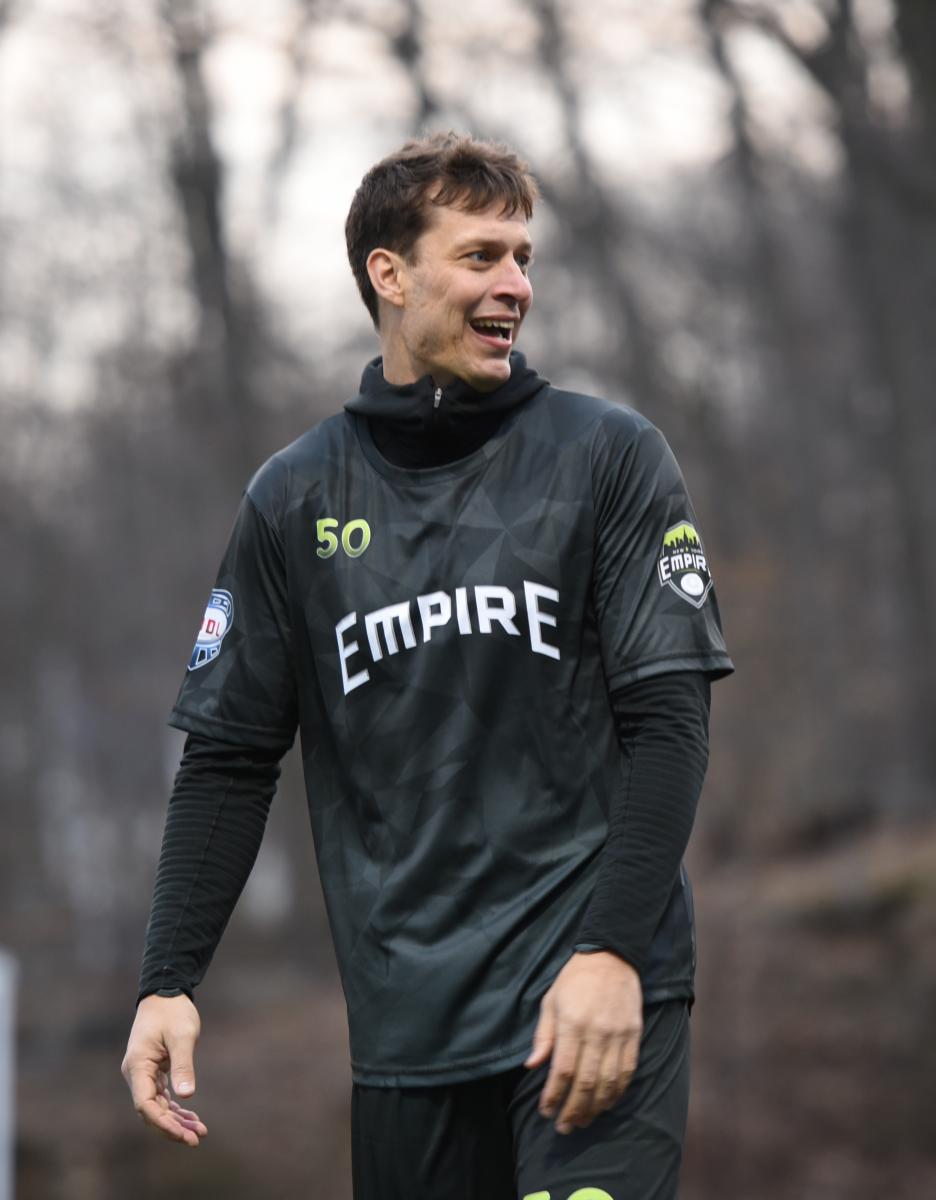 BK: Mostly, I just have to come up with clever ways to do training that don’t include going to the weight room. Doing more plyos these days than weights, but still able to go outside and run. The track’s still open.

BK: Getting creative coming up with all sorts of things. There’s a stairway that I did the other day that I did about 10 times which turned out to be pretty hard. You can still go running down the streets. There’s lots of places to do plyos. There’s [resistance] bands. It’s not too bad. The biggest thing is you don’t have your teammates around to kind of push you. But I’ve seen a few teammates around at the track.

BK: I kinda wanted to get my cardio a little bit better in the offseason. And also with ripping my hamstring up a bunch [last year], I wanted to get my legs in more of a stronger state before they started the ultimate season. I did a bunch of distance training which is extremely difficult for me. I did lose about eight pounds, which was good. 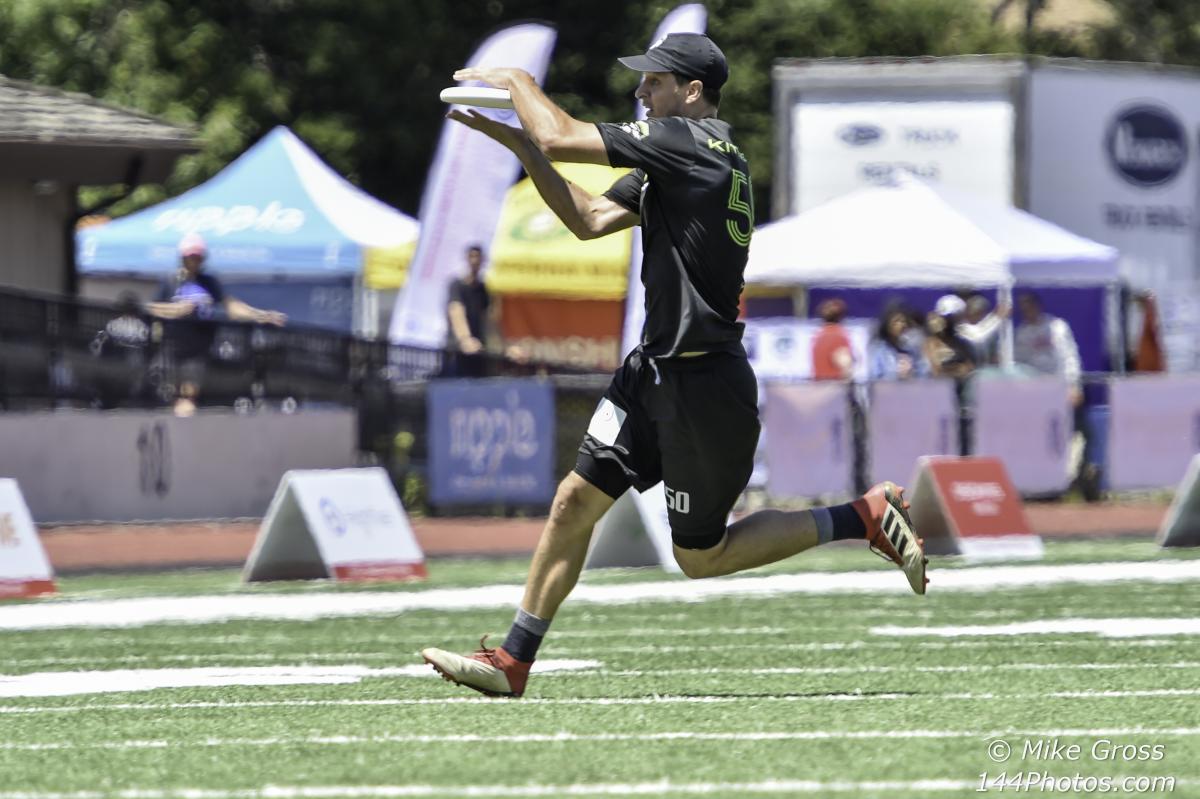 EL: What was the longest distance you ran?

EL: What do you average per kilometer or mile time-wise?

BK: It depends. If it’s shorter I can get up to around 10 or 11 kilometers per hour. But if it’s longer, around eight to nine. I just click on the treadmill the speed and then hang on for dear life. Also my watch is annoying; I got this fancy watch. It’s supposed to tell me where my peak is and how hard I’m going, and it always tells me to stop and I’m over the limit of beats per minute and that I’m in the red zone and that I need to seek help. It’s pretty funny. I don’t really wear it anymore because it kept telling me I was overtraining. I don’t need something telling me that it’s hard and I should quit. Someone told me that eventually it’ll realize that I’m not dying and then it'll give me better information, but just telling me that I constantly need to go to the hospital is not a very helpful training tool.

BK: I think it’s actually pretty good. Everyone’s pretty bought into the fact that we have a big season ahead of us and a lot to prove and we’re gonna have to work pretty hard. The practices have been pretty intense with people going at it, so mindset is definitely right. It’ll be interesting to see if that is rekindled when the season starts back up. Some of the people are a little bit lazier, and if you don’t have team workouts I could see them getting a little bit on the thick side.

EL: I assume you don’t want to mention any names. 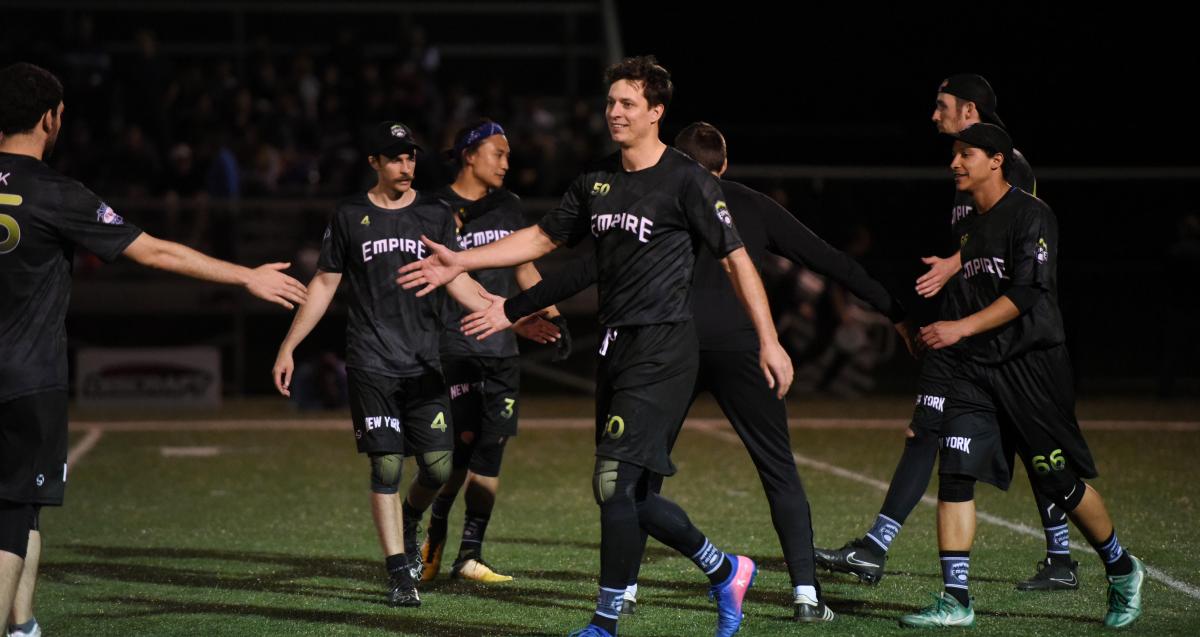 BK: Well, a game that sticks out to me that I really enjoyed was the Toronto game [in the 2018 playoffs] when when we went to Toronto and a New York team had never beaten them before, and they had been talking trash all year to us. At least a few of them had been. And just going in there and basically showing the team how to just win out of pure desire. There are just a few points I remember where everyone was just bought in to not giving up. Overcoming that huge hurdle with those guys was one of the major reasons that we were able to become the team we were [in 2019] because you have to figure out how to look your rival in the face and no matter how much better they are than you, you beat them. That was the huge stepping-stone that makes a team become what they are. If we don’t win that game, it’s a different story I think.

BK: Dylan Freechild on Team USA [for the 2017 World Games]. He’s obviously a punk kid that rides emotions and runs around like a lunatic, and he was the last person I expected to be compassionate and understanding and levelheaded and bring the team together, and he was the complete heart of Team USA, way more than just playing. He was a leader. And, like, normally he can be a bad teammate sometimes, but on that Team USA team, with both guys and women on the team, he just turned into this person that kept his compassion, but was able to unite and fire the right type of energy into the group, and never in a negative way. His typical style is sometimes to go a little negative. That was quite a cool thing to see. It’s always cool to see people rise above their general abilities to become something more. I would say that, without him, it would have been a lot more difficult.

BK: Uh, besides video games? (laughs) That’s all I spend my time doing. It’s kinda hard to think of anything else.

BK: New Orleans. Someone told me there’s a lot of good live music there.

BK: Hmm, that’s a good question. Let me ask [my girlfriend] Kristen. (Speaking to Kristen) Have we watched any good movies or TV shows recently? (Speaking back to me) Ford vs. Ferrari is a movie and Self Made is a show on Netflix. They’re pretty good. 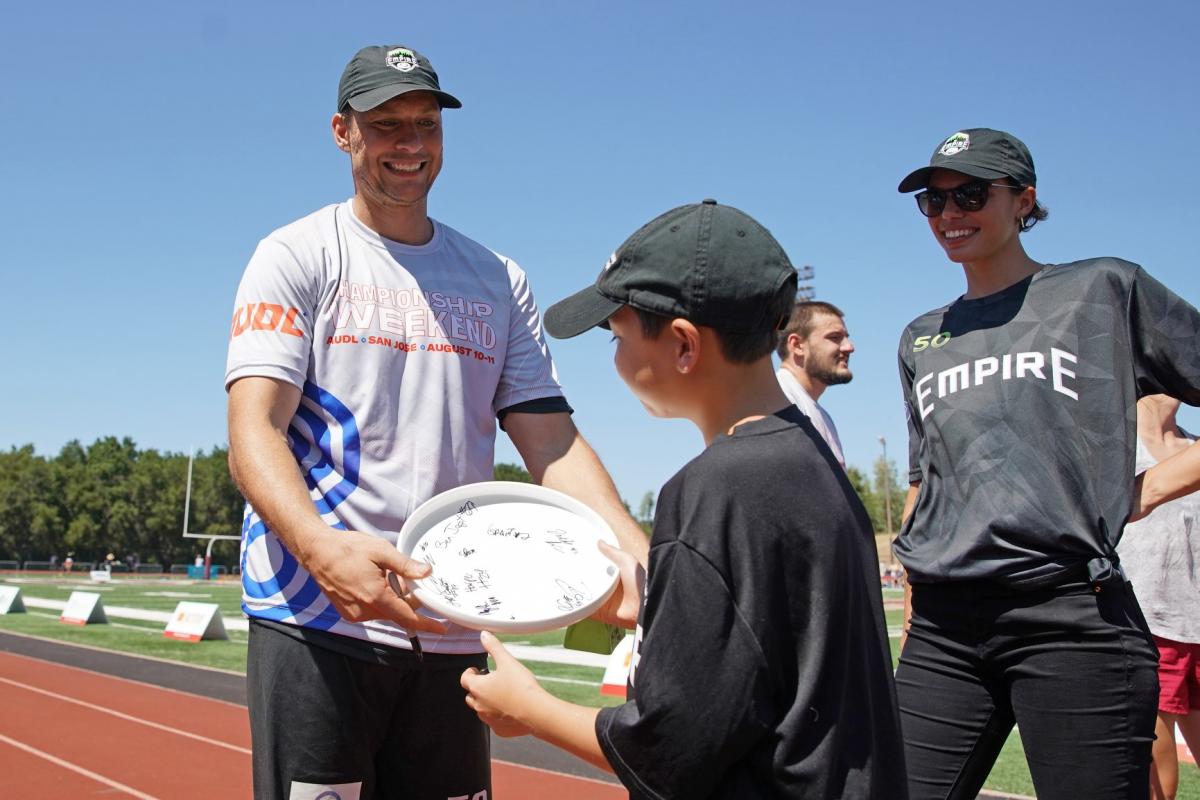