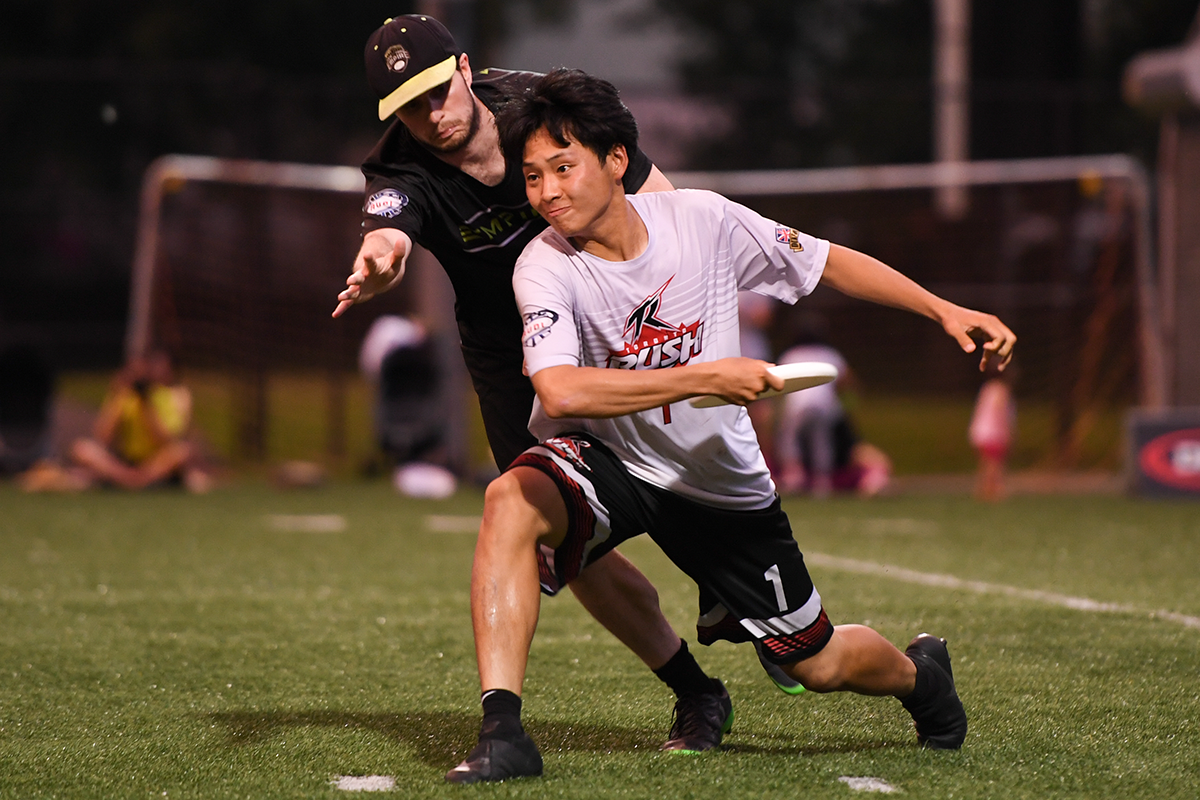 With the 2020 offseason in full swing, teams around the league have been announcing player signings and re-signings via social media channels. Re-signed through 2020, the following are five players who are pivotal to their teams' success in the upcoming season. 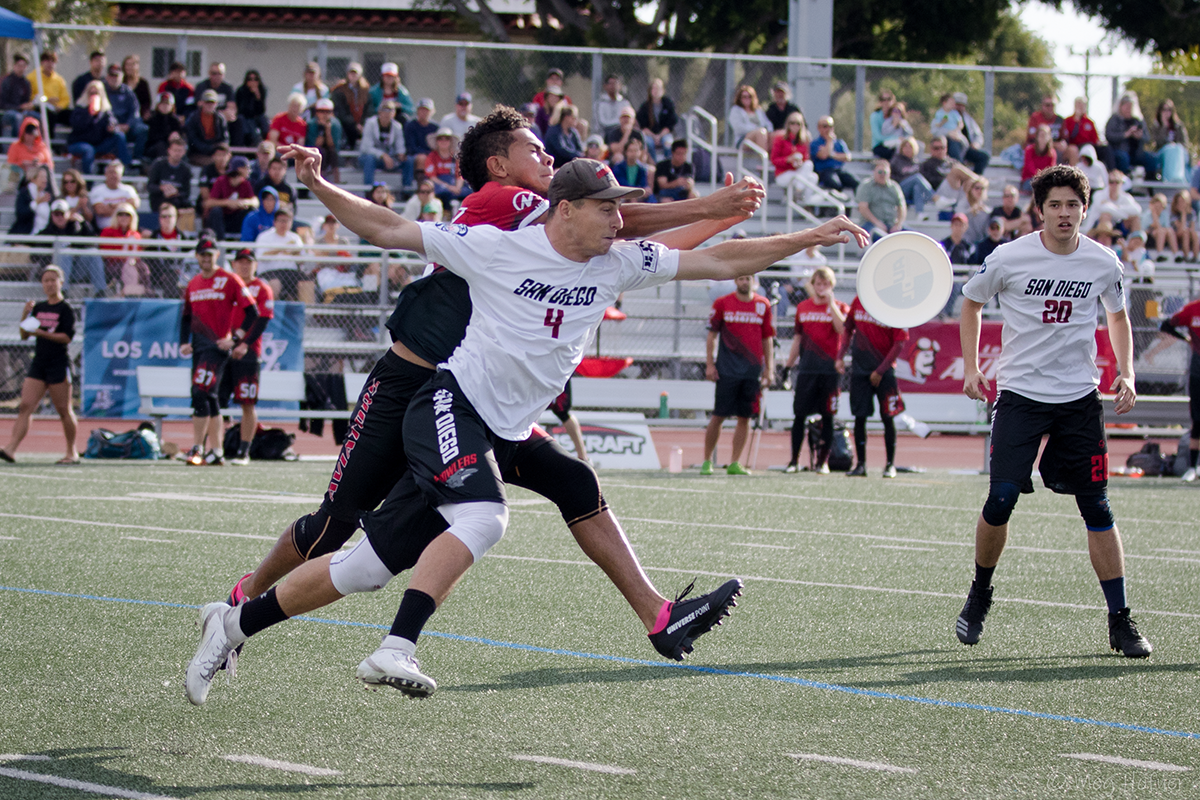 Earlier this month, the San Diego Growlers announced Scott Radlauer and Michael Tran as their 2020 captains, replacing 2019 captains Travis Dunn and Steven Milardovich—both still on the roster—for the upcoming season. The shift in captains sheds light on what the Growlers have been building for the past few years, namely a core group of young guys who will carry this team to new heights. Radlauer is the defensive presence that headlines this group.

Voted the “Best Cutter Defender” in the 2019 AUDL Tools Survey, Radlauer constantly shuts down opposing matchups with relentless pursuit and ability to cover multiple positions. He’s who you want out there when the game’s on the line and you need a defensive stop; he wants every disc in his vicinity, and is more than willing to put his body on the line to retake possession. Radlauer brings a lead-by-example intensity to the Growlers defense and it carries over into his offensive opportunities on the counterattack.

Radlauer raised his block total from 11 in 2018 to 17 in 2019 as he quickly became a top player on the Growlers’ D-line. He finished with the ninth most blocks in the league last season (including playoffs), and he’s averaging over a block per game for his career. As Milardovich steps down from captain, this is Radlauer’s defense going forward and at age 25, he’s just beginning to reach his potential. 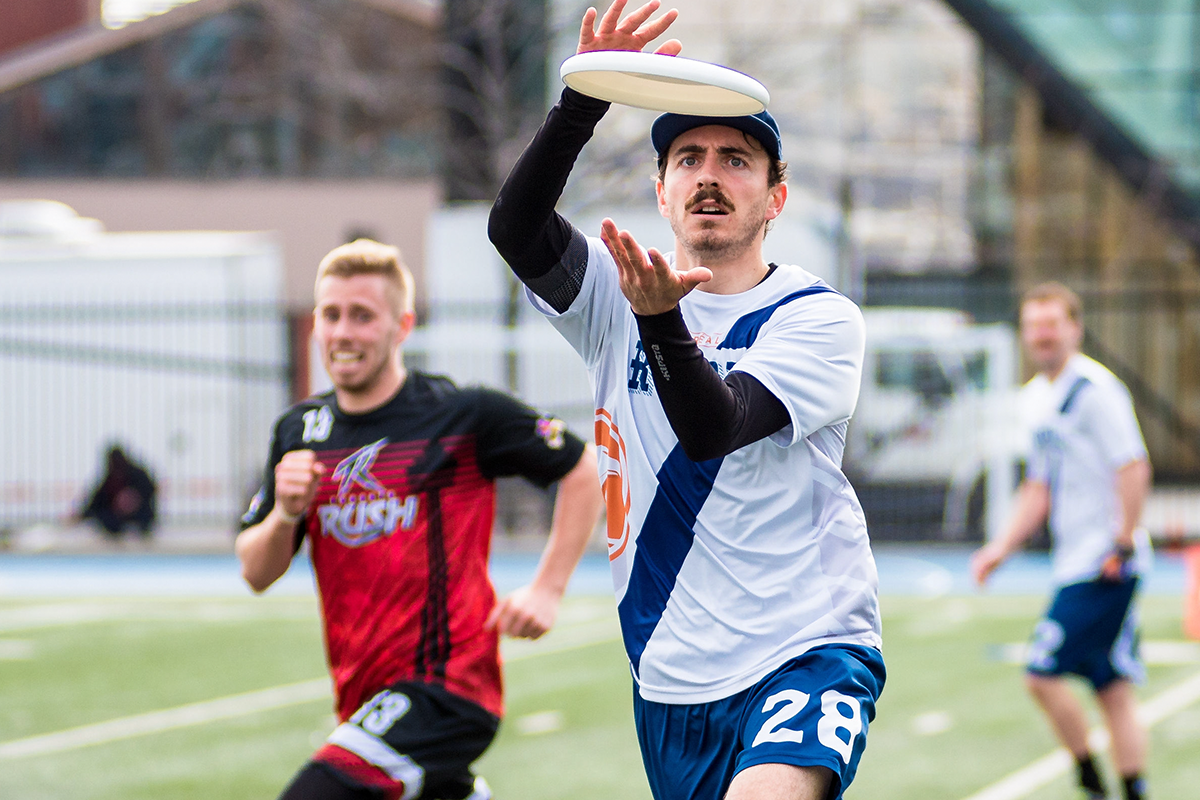 The Montreal Royal bringing back Sacha Poitte-Sokolsky for year two is a big re-signing for a team that boasted one of the more talented 2019 rookie squads.

Tying for the most goals in the 2019 regular season by a rookie, Poitte-Sokolsky made an immediate impact working as a complementary cutter alongside the league leader in goals, Quentin Bonnaud. Poitte-Sokolsky was heavily involved in the offense from the first game and finished the year with 310 touches, fifth most on the team and actually six more than Bonnaud. Poitte-Sokolsky excelled as an initiating cutter, and showed a veteran awareness to drop back and handle when the situation called for it. Comfortable pushing the disc downfield with a diverse skill set, Poitte-Sokolsky played 244 points last season, the sixth-most in the league among rookies.

His commitment to the Royal was undeniable last season; he was one of nine Royal players to appear in all 12 of the team’s regular season games. Getting buy-in from their younger players is going to keep the Royal relevant in the East Division; they’re off to a great start in 2020 by re-signing a star rookie. 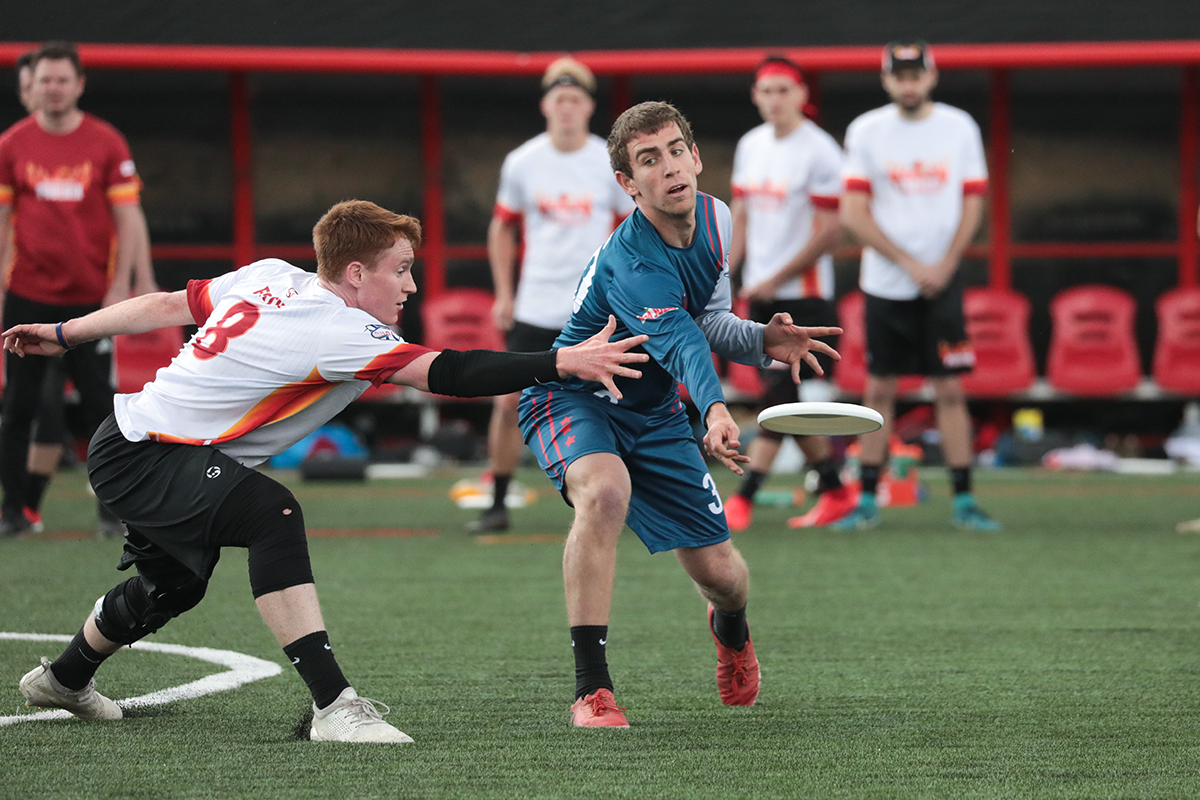 After missing the 2018 season due to injury, David Bloodgood returned to the field for the DC Breeze in 2019 as their defensive captain and picked up right where he left off. His playing time and per game stats during his 2019 campaign were nearly identical to those of 2017, as he led the Breeze defense to yet another top-10 finish in points allowed per game, their fourth top 10 finish in as many seasons.

Bloodgood’s strong defensive instincts have made him a staple for the Breeze D-line. He’s eager to make plays, but smart about it, setting up effective poaches while limiting big gains by opposing offenses. Tying for the team lead in blocks last season with 12, while also notching 14 assists and 11 hockey assists, Bloodgood was equally effective forcing turnovers as he was leading the counterattack as a center handler. He had just 12 throwaways on 198 attempts (93.9 percent completion rate), valuing each possession as the D-line looked to secure precious breaks. Like most Breeze handlers, Bloodgood often opts for quick handler movement off turnovers to keep the disc moving and stay in rhythm. He won’t force many throws, but he‘ll huck when the opportunity presents itself.

For a team that has few struggles on offense, maintaining their defensive core year-to-year is what will keep them competitive with the league’s best as they move into the Atlantic Division in 2020. With Bloodgood, the Breeze defense is again in good hands. 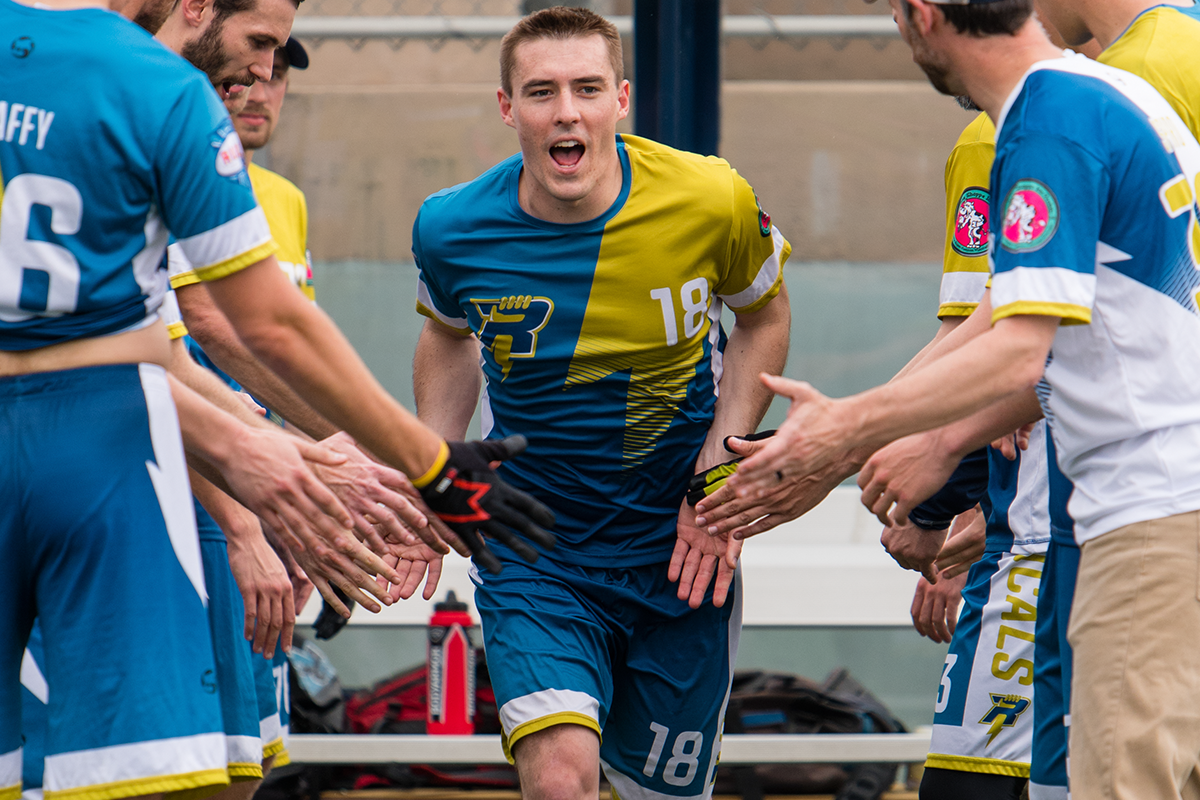 The Madison Radicals enter 2020 with several key departures; they will be without franchise legends Pat Shriwise, Dave Wiseman, Peter Graffy, and Ben Nelson. Losing a chunk of their core makes it all the more important to retain the remaining vets, as they look ahead to a new era—2019 was their first season in which they failed to qualify for Championship Weekend. In re-signing their dynamic, playmaking defender Sterling Knoche, the Radicals have set themselves up for yet another year of defensive dominance.

In his first three years in the league, Knoche has made a name for himself as one of the key pieces in the suffocating Radicals defense. He’s racked up at least 18 blocks in every season and has averaged over 2.0 blocks per game for his career (including playoffs), ranking third all-time in league history. While a ridiculous 2.0 blocks per game average is scary, what may be even scarier is he’s improved his regular season block totals every year he’s been in the league, building up to 22 blocks in 2019 (fifth in the league). One of the best athletes on the team, Knoche makes momentum-swinging blocks by throwing his body around, rising up over opposing cutters, and using his instincts and closing speed to bait throws into coverage. Opposing throwers need to know where Knoche is on the field at all times; he’s among the best in the league at making up ground on seemingly open receivers.

Knoche owns the record for most blocks in a single postseason, with 10 in the Radicals’ 2018 championship run. If the Radicals can bounce back in 2020, Knoche and his defensive consistency is going to be a big reason why. 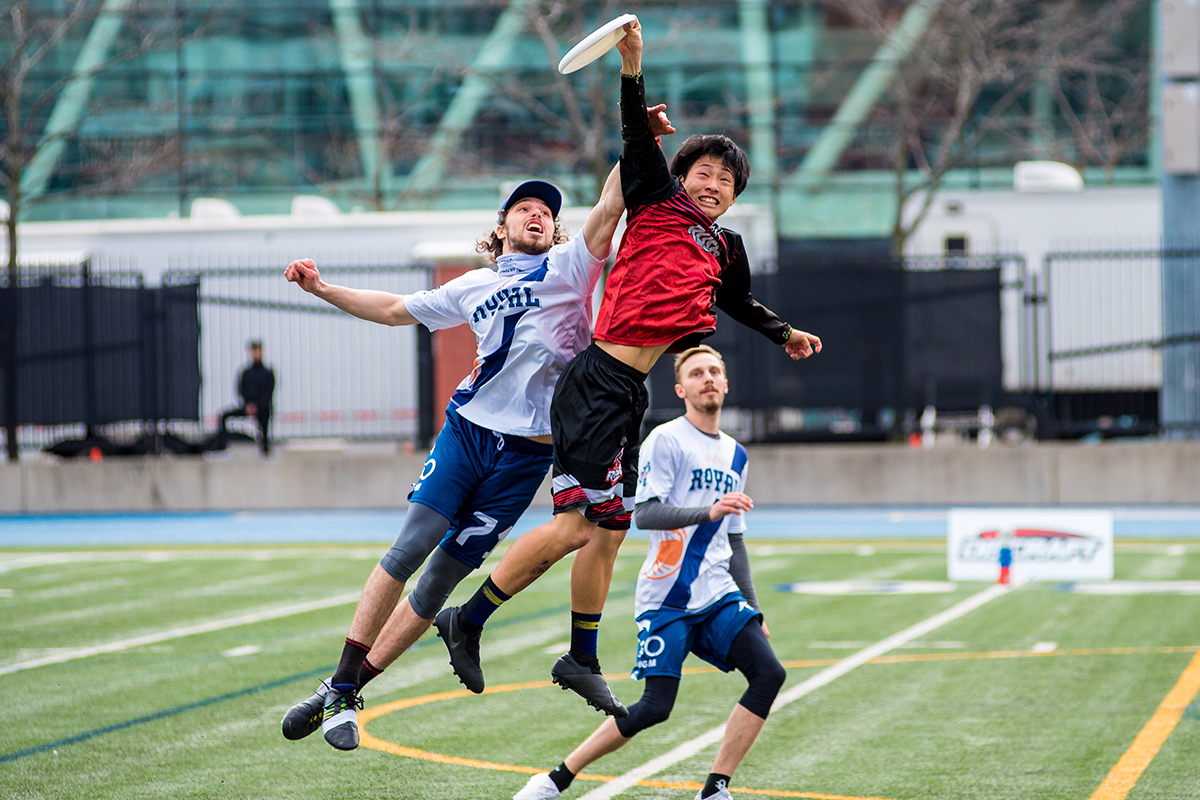 Coming over to Canada from Japan last year, Akifumi Muraoka had an outstanding rookie season serving as a key offensive weapon for the Toronto Rush. His presence immediately added a new dimension to an established offense, bringing superior quickness and speed to keep defenses off-balance. This re-signing is huge for a team built around an aging veteran core, with Muraoka serving as a rejuvenating spark plug.

Muraoka was eased into the offense, touching the disc 10, then 14, then 25 times in each of his first three games, respectively. He quickly became a central piece of the Rush offense, and by the end of the regular season he’d racked up 28 assists and 26 goals. Able to create space with shifty cuts, Muraoka thrives on quick disc movement to exploit opportunities downfield, either by busting deep or continuation hucking to a teammate. He does a great job timing his cuts to stay in rhythm with the offense, and he’s decisive with the disc. Muraoka also boasts some impressive hops; he excels in the air, perfectly timing his jumps to come down with 50/50 discs above much taller defenders. Though his scoring dropped some in the playoffs, Muraoka still contributed a goal, an assist and a block in round one vs. DC, while completing a season-high 22 throws.

A fan favorite on and off the field, Muraoka brings a fresh new energy to the franchise. Locking him down for another year only improves the team’s chances to fend off Boston, compete with New York, and reclaim their position atop the East.