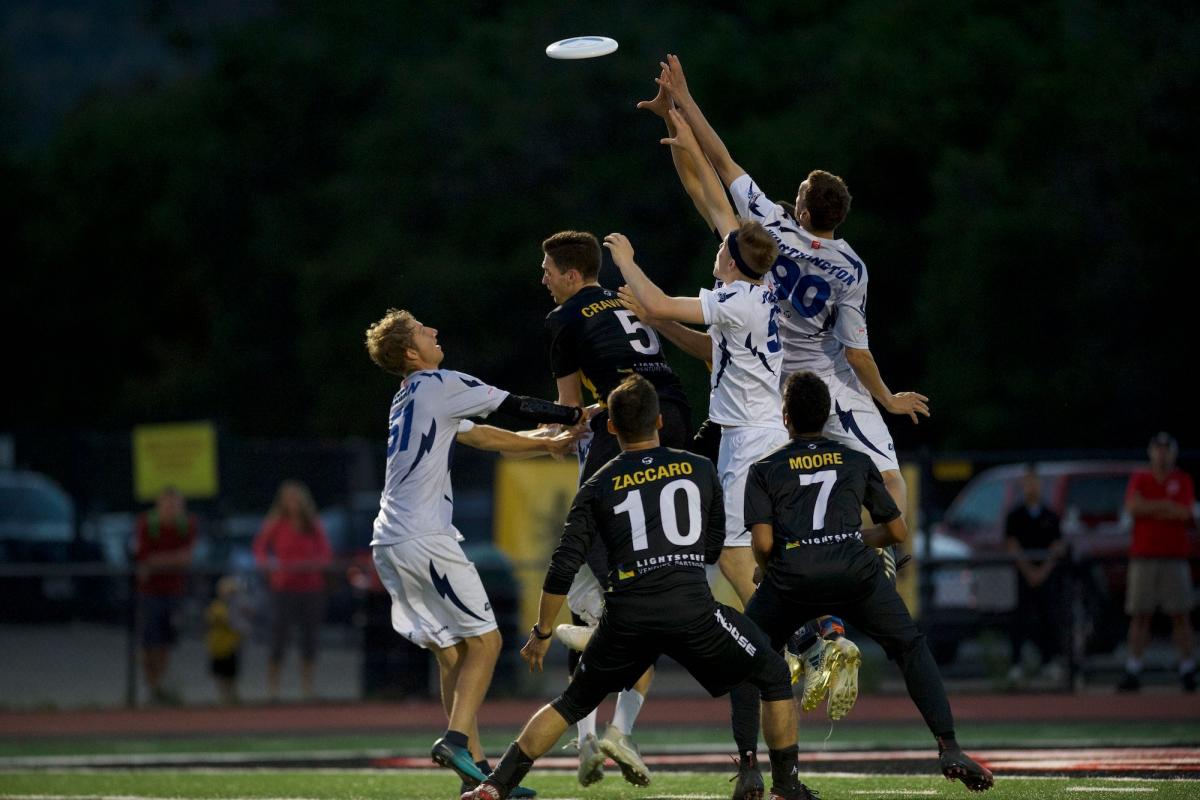 With four different divisional champions in each of the past four seasons, the West is the most tumultuous division in the AUDL. 2019 will be no different, as each team has undergone major roster overhauls during the offseason. Here is a quick rundown of where the division stands with just under a month until the regular season begins. 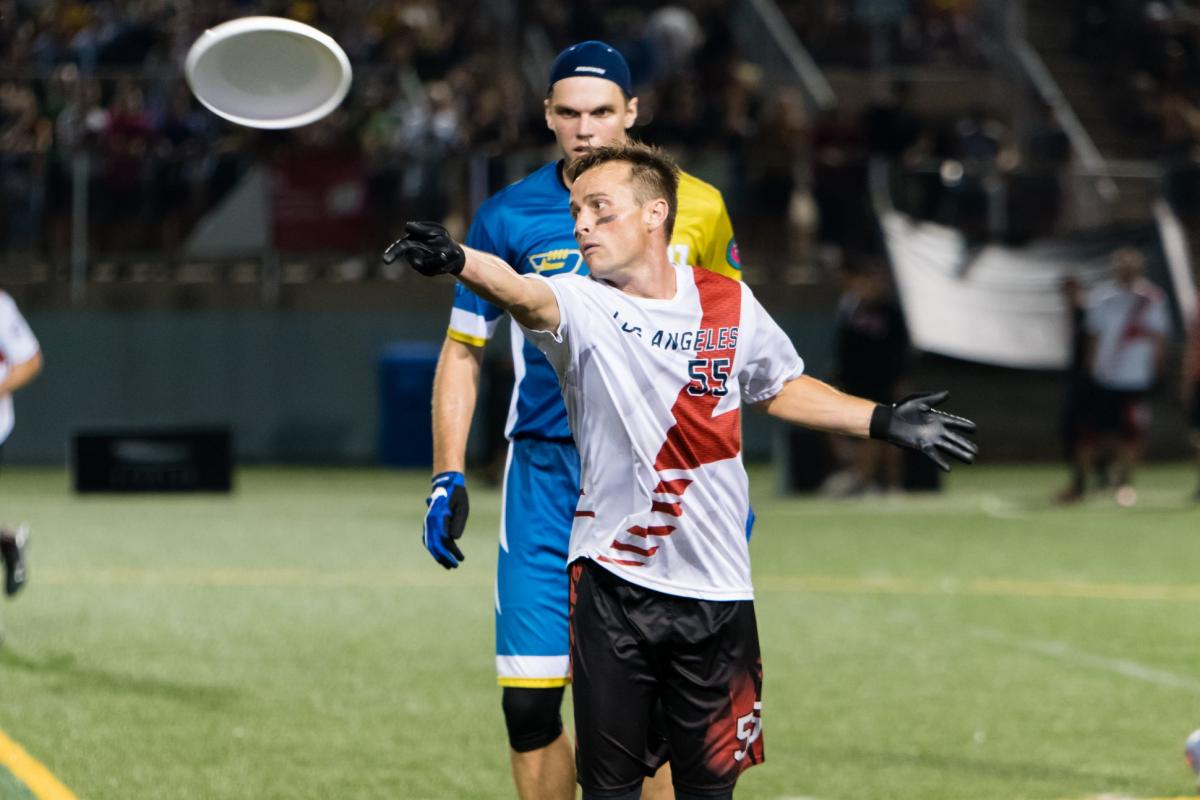 The Los Angeles Aviators will be a different team from the one that qualified for Championship Weekend last season, particularly on offense

“We do have some changes, mostly some guys leaving,” said four-year Aviators defensive veteran Zach Theodore. “From our starting O-Line, we're missing Chris [Mazur], Brent George, Eli [Friedman] and Tom [Doi]. Allen Lai's not playing this year, and Mark Elbogen's out. Those are some of our bigger names.”

Those are big names indeed. Those six players combined for 109 goals and 113 assists last year. Still, Los Angeles will be full of capable players. 2018 First Team All-AUDL cutter and reigning league leader in goals Sean McDougall should remain dominant as a receiver. Eric Lissner and Tim Beatty have the ability to assume more responsibility with the disc; the two combined for 74 assists and over 600 completions during the regular season last year. New player-coach Tyler Bacon is beloved in the locker room. Furthermore, the Aviators will have new blood filling out the roster.

“A lot of younger, really athletic guys,” said Theodore of the Aviators’ shift towards youth. “ A lot more athleticism, but a little bit less experience. It'll be interesting. I'm curious to see how we match up against the improved Spiders.”

“It'll be fun and different,” Theodore continued. “We might need some time to mesh, I think. First couple games might be rough.”

Theodore—who has spent 80 percent of his career playing on the defensive line—will have an expanded role on offense for Los Angeles. Nate Ransom is expected to step into a larger throwing role with the offense. And with underappreciated contributors like Andrew Padula, Aaron Weaver, and Jeff Silverman—the three of whom combined for 36 blocks  during the regular season—the defense that finished fifth in the league in blocks per game last season will remain stout. The Aviators will be no easy out this year. After all, they romped through the division last season; Los Angeles was 12-1 overall against the West in 2018. 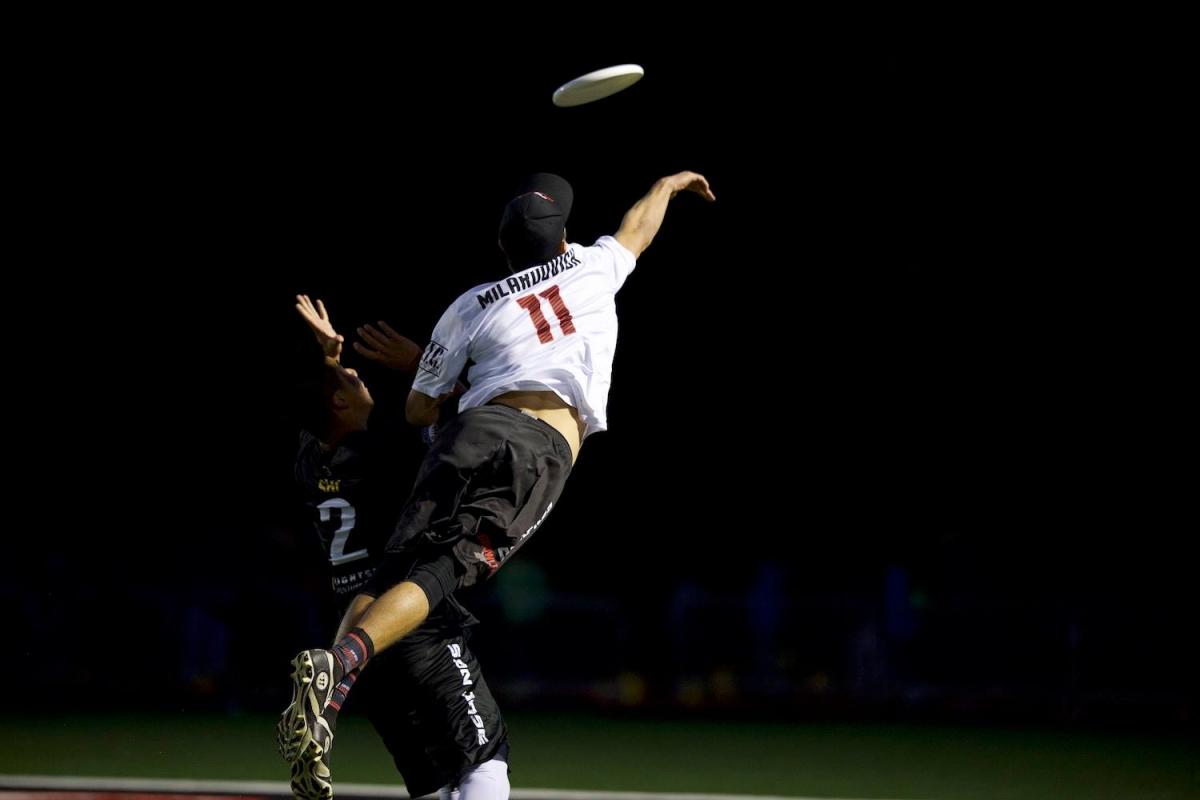 The San Diego Growlers have one of the most stable cores in the West. Young players like Tim Okita, Scott Radlauer, Will Turner, and Michael Tran lead a solid crop of second and third year pros that are only looking to get better for the Growlers in 2019. Sean Ham has maybe been the most underrated receiver in league history—, he has 203 career goals, good for ninth all-time. Dom Leggio is one of the most solid handlers in the league, quietly averaging 20+ assists and 456 completions (97.50%) each season during his four-year career in San Diego.

Beyond the supporting cast, Travis Dunn has developed into one of the best overall offensive players in the league. Dunn’s 52 assists and 30 goals last year earned him First Team All-AUDL honors, and he’s only reaching his peak. The 28-year-old has one of the most consistent forehand hucks in the league, and he is just as capable cutting deep. He can even be unleashed as a lockdown defender when necessary. There are no virtually holes to his game.

It was no fluke that the Growlers finished second in a cutthroat West last year and qualified for the playoffs. They have a principled identity on both sides of the disc. And this offseason the team landed some big playmakers to complement their already burgeoning talent.

Former two-time league MVP Jonathan Helton is joining the Growlers in 2019. With 276 assists, 190 goals, and 129 blocks in his career, Helton is one of the most decorated AUDL players of all time. He is fifth in career blocks and second in career assists. He is 35 years old, but Helton’s zeal for fitness means he’s still able to dominate athletes over ten years his junior. Dunn claims to have not yet been skied by Helton in practice, but it’s only a matter of time.

Helton isn’t San Diego’s only big addition. Jesse Cohen will rejoin the Growlers after a one-year stint on the rival Aviators.

“We're glad to have him back. Still beating him up a little bit over his departure for a year,” said Dunn.

Cohen is an all-around dynamo on offense whose speed and skills earned him recognition as the best underneath cutter from peers in the division in 2018. The Growlers may be flying under the radar, but they have the supporting cast andn now star talent to contend for their first trip to AUDL Championship Weekend this year. 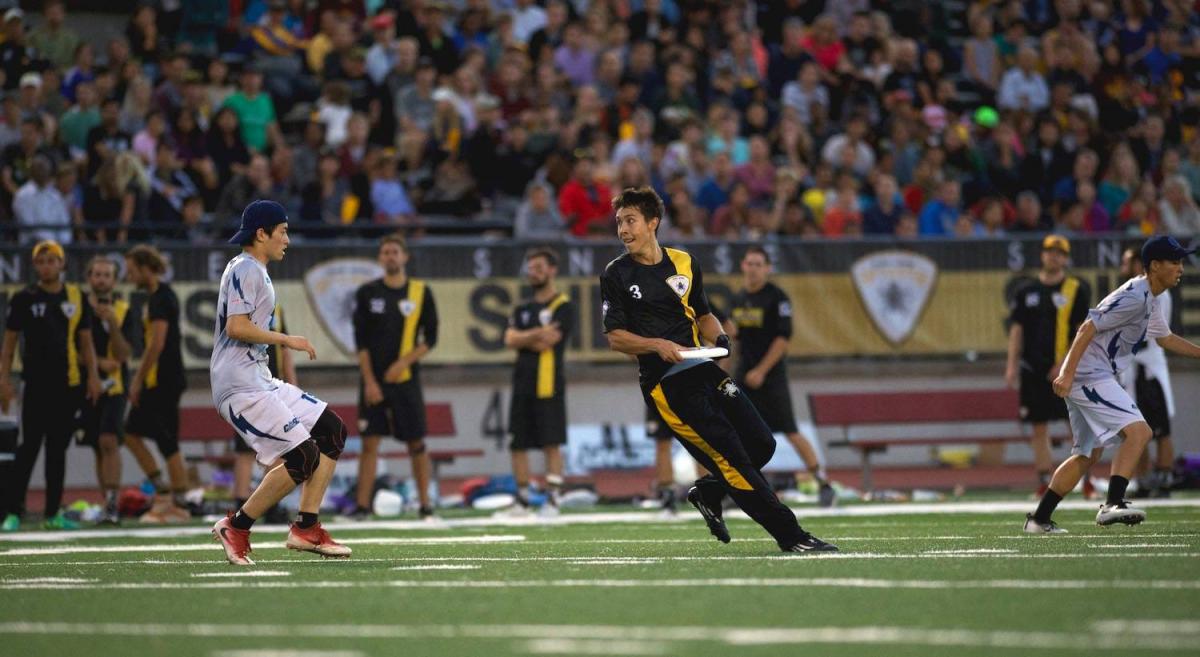 The San Jose Spiders are the only AUDL team to have ever won multiple titles, and they are poised to compete for their third since 2014. They added Antoine Davis and former Spider Marcelo Sanchez, two of the best players in the division, if not the league. Davis has made a name for himself as an athletic marvel, routinely skying the competition downfield. He caught 77 goals in the last two years for San Francisco, and is excited to combine forces with some of San Jose’s best throwers.

“[Justin Norden] and I got our first touches together,” said Davis, referencing the final Spiders tryout.

“It seemed to work really well. Since we've watched each other and played against each other so much, I know when he's in a certain position, what he's trying to look for. I just turned upfield and gave him the look, and he just put it out there, and we made several connections during the tryouts.”

Davis will need to establish chemistry with a variety of new teammates beyond Norden, but the presence of Sanchez should expedite the process. Sanchez was a member of both Spiders championship rosters in 2014 and 2015, where his all-around tenacious game was a significant contribution to the offensive line. Quiet as a person, Sanchez lets his play and productivity do the talking. He threw 48 assists and caught 34 goals last year, making him one of only seven players in the league to hit both the 40-assist and 30-goal thresholds.

If Davis’ recruiting pays off, there could be more Bay Area talent on the way to San Jose before the season begins. Beyond the two incoming stars, San Jose is already stocked with talent. Ethan Falat had a breakout year in 2018 in his fourth season as a pro, and the 6’4” Jackson Stearns is lethal downfield on offense, with or without the disc. Divisional opponents admitted to struggling to contain San Jose’s offense last year, and the new additions will only add more potency. San Jose is confident entering the season. 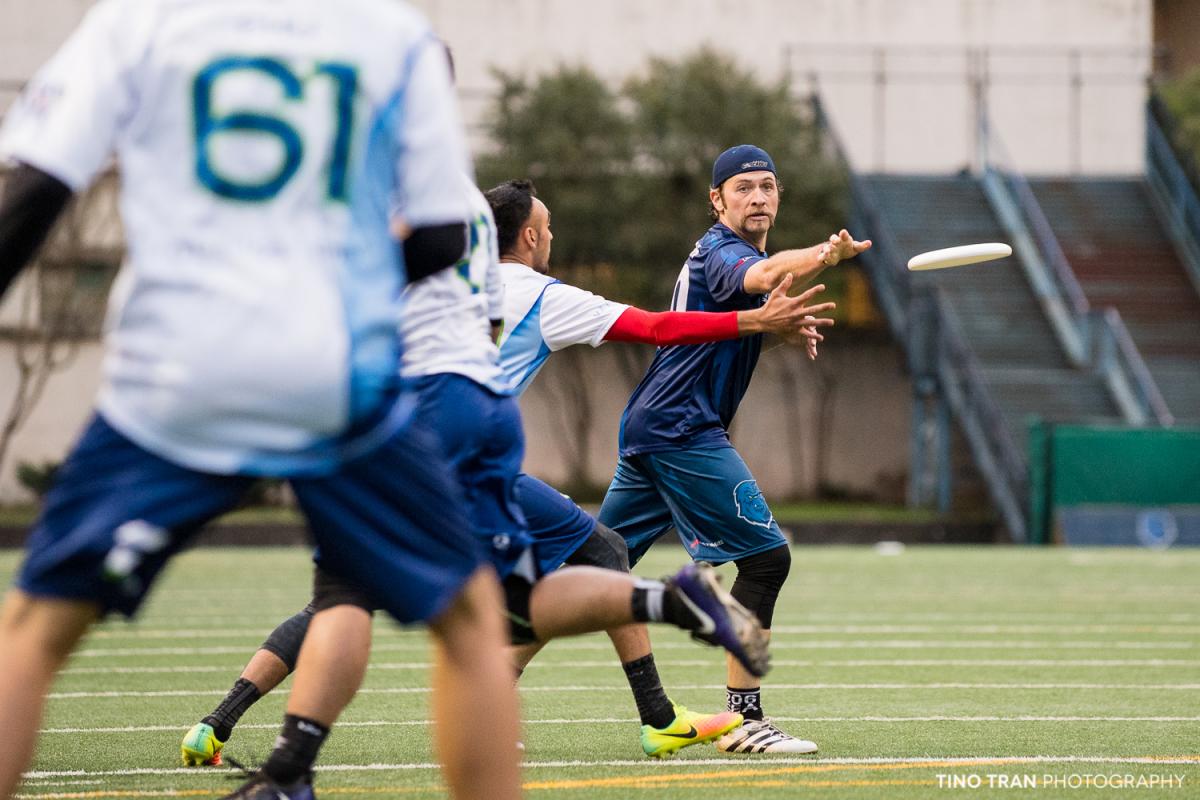 After falling to the bottom of the divisional standings in 2018, the Seattle Cascades have their sights set on dramatic improvement. Any team that rosters Mark Burton—the AUDL’s all-time leader in assists per game—will always be capable of putting up a lot of points; Burton deferred his retirement to return for another season in 2019 because of his confidence in the organization. He won’t be alone. Like the Spiders and Growlers, the Cascades have made significant upgrades going into the upcoming season.

The biggest and most recognizable name is Khalif El-Salaam. He threw 38 assists and caught 29 goals in an electric 2017 rookie campaign with the Cascades. He’ll return to quarterback a defense that lacked an identity in 2018. Other 2017 contributors like Henry Phan and Jesse Bolton will return to provide experience to an otherwise young roster.

Those aren’t the only additions Seattle has made to its 2019 roster. They’ve added offensive cutters in the Toronto Rush’s Jay Boychuk and San Jose’s Zach Sabin. The two first-year Cascades combined for 41 goals in 21 combined regular season games in 2018. Both Boychuk and Sabin love to cut deep, so Burton will have a field day with his new weapons.

“I know Zach definitely brings height to the team,” said Burton. “It's great to hear (Jay's) perspective on what Toronto has done successfully. “
“Those are huge additions.”

Led by Kodi Smart and Shane Worthington, Seattle’s youth will continue to improve after fielding one of the youngest teams in the league last year. The Cascades started practicing a month earlier than last season, so while other teams are finishing tryouts and electing captains, Seattle is already ramping up to game shape. With more offensive tools and El-Salaam bolstering the defense, Seattle could be the most improved team in the West heading into 2019.

“People would probably put us last right now, and I'll be honest with you, I don't see that. I’mma throw us at number one,” said Burton of Seattle’s placement in the West Division.