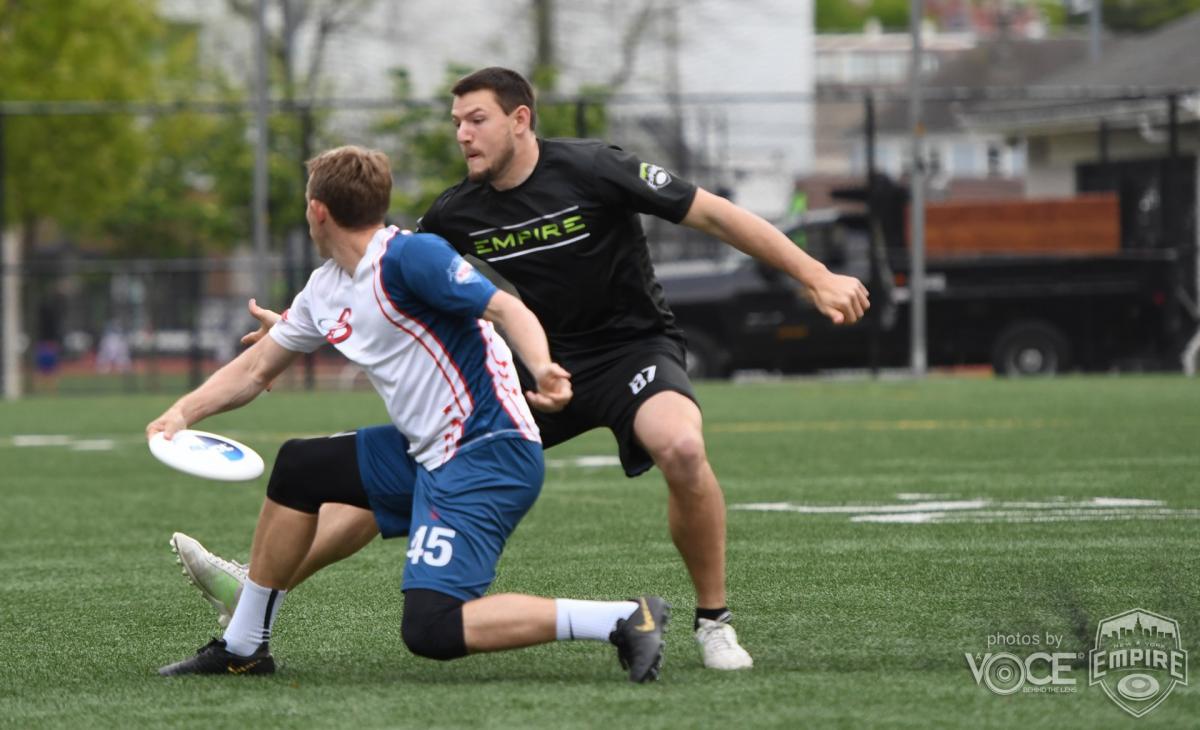 1. New York vs DC, Round Three

The New York Empire have rolled through the first half of their season, as they’ve been at number one in the AUDL Power Rankings all year. They stand at 6-0 and are the only undefeated team. Though newcomers Jack Williams and Grant Lindsley have been great, Ben Jagt remains the Empire’s offensive fulcrum. He was named to the First Team All-AUDL last year, and he hasn’t slowed this season. He is most often found finishing plays, either launching hucks downfield for scores or catching deep shots himself.

“As far as being one of the biggest and best targets in the AUDL, he is definitely up there,” said Jagt’s teammate on the Empire, Beau Kittredge.

Jagt has 22 assists and 27 goals already. He’s third in the league in goals and in plus-minus. He has risen to the biggest moments, compiling nine assists and eight goals in the Empire’s May 11 double-overtime 26-25 win over the DC Breeze.

The Empire have, frankly, not been challenged much this season. The Toronto Rush, who have historically dominated the Empire, were dispatched fairly easily, 22-17. The only team who has even been able to keep a game close with New York has been DC. Though the Empire have won both contests with DC this season, the two games have been the two closest final scores of New York’s season. Much of that has been because of the brilliance of reigning MVP Rowan McDonnell, who has averaged 4.5 assists and six goals in the two New York games.

“He is basically given the whole field to work with,” said Kittredge, who is one of New York’s primary defenders against McDonnell. “Right now, I would say that the hardest thing to do in the AUDL is [to guard McDonnell]... I really do enjoy [it], I like his game, and I like the way he's just running pretty much the whole game. He's definitely an impressive athlete, and somebody that I look forward to playing against.”

Though they have beaten the Breeze, the Empire have not been satisfied with their performances.

“I don't think we can allow them to score 25 points and say that we played well,” said Kittredge. “I think that that is on us. It's not just on the players. It's on the coaches to give us schemes that can at least slow them down. The first half of the game, I don't know how many turnovers we got, but it seemed like very little resistance was put up by us. And that just can't, it just can't be like that if we want to be successful.”

The Empire are undefeated, but their job remains unfinished. They’re entering the third and final Empire-Breeze game of the regular season hungrier than ever.

“We're still struggling with a lot of mental errors, and a lot of miscommunications,” said Kittredge. “Easy plays that, a lot of time even though we're winning, we don't feel good about it.”

“It's exactly where we want to be.”

2. SoCal Battle In The West

Through just over half the season, two teams have run away at the top of the West Division. The San Diego Growlers (6-1) lead, as they took an already strong core and added offensive playmakers in Jesse Cohen and Jonathan Helton. Their position at the top of the division is no surprise. The Los Angeles Aviators (5-2), however, are shocking the division with their strong play.

“I'm very shocked, yeah. I did not expect anything like this. We've been playing really well,” said Aviator Zach Theodore.

They are the second-highest scoring team in the league, posting an average of 22.86 goals per game. The Aviators lost four starting players from their offense, yet they remain a contender in the West. They’ve adapted by adding a number of rookies who fit seamlessly into the system on both sides of the disc.

“Last year we had more star players that would take over the game themselves, and do a lot,” said Theodore. “This year we've got a bunch of guys who are more looking to fit in. They're doing a great job displaying their game within the system. People were always good team players, but this year I feel like there's more of that from new guys.”

New offensive contributors like Danny Landesman and Joc Jimenez haven’t missed a beat this season. However, Los Angeles’ competition this weekend has been performing even better than the Aviators. The Growlers have been the highest-scoring team in the league, putting up 23.71 goals per game. They are also the only team to have beaten the Aviators, which they accomplished on April 6 and again on May 11. In the May 11 game, the Aviators couldn’t stop the Growlers’ offense no matter what they tried, as the Growlers finished with a then season-high 27 points.

“Our defense, we just could not make anything difficult for them,” said Theodore. “The few breaks we got early, it was mostly their mistakes... Initially, we were afraid of their deeps, so we would force them under and play no inside on the mark. But that just gave them easy swings to the break side for under cuts, and they worked it up and scored quickly. Later we tried changing it up a little bit. They would still break us around over and over again for easy scores. They didn't huck that often, so we were successful there, but I think we made it too easy.”

Solving the Growlers’ offense is easier said than done. Tim Okita, Michael Tran, and Dom Leggio are a fantastically solid handling core, combining for 573 completions and only 15 throwaways this season, good for a 97.4 percent completion rate. The three combined for 135 passes and no throwaways on May 11. The Aviators need to make life harder for them. But when a defense overplays the Growlers’ handlers, it opens up space for San Diego’s most potent offensive weapon, Travis Dunn.

Dunn has 30 assists and 20 goals this season, and he’s in second in the league in plus-minus. Los Angeles focussing on the Aviators’ handlers could open up more room for Dunn to dominate. Part of defending a great offensive team involves picking your poison, and Los Angeles can only do so much. Theodore readily admits that the Growlers are the favorite in the matchup.

“I think they're the favourites, for sure. We'd have to put together our top game, and they'd have to make some mistakes. So if we can give them another game, another test, before hopefully, we'll probably see them in the single playoff game in the West. We'll have two more chances to figure out how to slow them down.”

The Aviators are 3.5 games ahead of the San Jose Spiders for the second and final playoff spot in the West. With only four games remaining in San Jose’s schedule, that number could be insurmountable. But Los Angeles has designs on topping the Growlers and reaching Championship Weekend for the second year in a row. To do that, they’ll need to figure out how to slow San Diego’s offense. With both of Los Angeles’ next two games coming against the Growlers, there’s no time like the present.