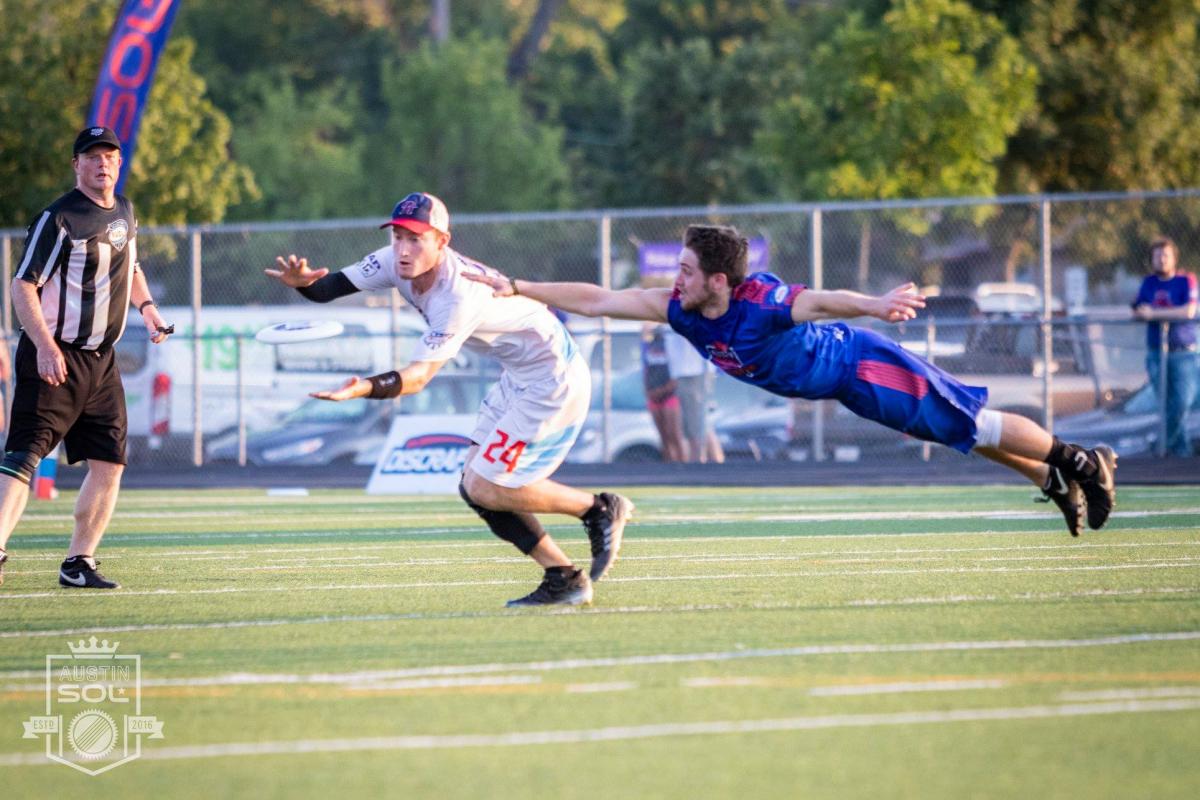 The last time the Raleigh Flyers took the field, they lost in the South Division championship game 20-19 to the Dallas Roughnecks. Dallas went on to make their second AUDL championship game appearance in three years, losing in the title game to the Madison Radicals, while the Flyers faced a long offseason of soul searching. Their rematch will kick off the first game of the AUDL regular season on AUDL.TV this Friday night.

“It leaves a sour taste in our mouths.” said Raleigh Head Coach Mike DeNardis. “But it's something that happens. You just have to move on. I don't feel like it's been a damper on the start of our season.”

The Roughnecks aren’t the only obstacle facing the Flyers this season. They lost almost a full line of star talent over the offseason, including 2018 All-AUDL Second Team member Jack Williams and two-time league MVP Jonathan Helton. They will also be dealing with limited availability from 2017 MVP Jonathan Nethercutt, who will be unavailable for many of Raleigh’s road trips, including the opening weekend Texas road trip against Dallas and the Austin Sol.

Raleigh is still stocked with talent, and they have a variety of incoming players to fill vacant roles. Three Carleton College players will join the Flyers for their rookie seasons: Sol Yanuck, Eric Taylor, and Henry Fisher. They’ll be starters from day one, says DeNardis. The 6’6” Fisher especially has a knack for finishing plays, and he will be a contender alongside Jacob Fairfax, Mischa Freystaetter, and Terrence Mitchell to lead the Flyers in goals.

The Flyers also picked up 2017 First Team All-AUDL handler Bobby Ley, who should be another huge addition. He has thrown 104 assists and 1508 completions—second most in the AUDL—in his last two seasons with the Tampa Bay Cannons. Ley’s range will complement Raleigh’s ensemble of giant cutters in Fisher, Freystaetter, and Fairfax. Ley is coming into the 2019 season with knee issues, so Raleigh is planning to work him into the rotation slowly.

Raleigh’s team dynamic has evolved with the roster. The weight of expectations burdened Raleigh last year. This year, the team feels more carefree.

Raleigh and Dallas are both title contenders, and their rematch will be a thrilling first game of the season. Dallas’ roster will be largely the same, while Raleigh has retooled significantly. The intensity of the matchup, however, won’t change at all.

2. Austin Sol with chance to capitalize

After facing Dallas in the season opener on Friday night, the Flyers will stay on the road to challenge the Austin Sol on Saturday night in the AUDL Game of the Week on Stadium. The Sol performed well against the Flyers in 2018, splitting the regular season series 1-1 before losing a close playoff game 26-23.

One would be forgiven for thinking that with Raleigh losing some offensive firepower, the Sol might have the edge in a matchup this season. Ethan Pollack, an offensive cutter on the Sol, isn’t falling into that trap.

“I'm not looking at the guys that they've lost. We're looking at the guys that they still have, and they're still a really strong team,” Pollack said. “We know we're competitive with Raleigh. We expect those to be competitive games again this year. We were a playoff team last year. The goal this year is to win the division, so you've gotta beat good teams to do that.”

Austin will have an advantage by playing at home against a tired Raleigh team. Austin getting a win in their first matchup with Raleigh would be a huge step towards a division title. The next time the Sol face the Flyers this season, the Sol will be the ones on the second leg of a back-to-back road trip. Austin will have no better chance against Raleigh than this weekend.

The San Jose Spiders are back.

Winners of the 2014 and 2015 AUDL titles, the Spiders haven’t been in the inner circle of AUDL title contenders for a few years. This year, though, San Jose will return to the league’s spotlight.

They added stars in Antoine Davis and Marcelo Sanchez. The Spiders also recently signed another cutter capable of dominating games: Lior Givol. Givol finished seventh in the league in 2018 with 50 goals, and was first among qualified players (minimum four games played) with 4.55 goals per game. San Jose has also filled out the roster with supporting talents like Chuck Cao. Cao amassed 88 assists combined in 2016 and 2017, and his hucks will set the table for cutters like Davis, Sanchez, and Givol.

The Spiders will also host this year’s Championship Weekend on August 10-11. If they do emerge from the West, they’ll have home field advantage at Foothill Stadium. Their march to the playoffs will begin this weekend, playing on the road against the Seattle Cascades.

The Cannons will face another rebuilding season in 2019. Bobby Ley is gone to the Flyers, and receiving threat Jordan Huston is not with the team either. Michael Fairley is gone, and Tyler Kunsa will be out long-term with a knee injury. Those four combined for 84 assists, 69 goals, and 1499 completions in 2018. Offensive star Nathan Vickroy will not play in Tampa Bay’s first game this weekend against the Atlanta Hustle.

If the Cannons still compete for a playoff spot this season, it will largely be because of the efforts of Andrew Roney. He has thrown 50 assists in back-to-back seasons, a feat that has only been accomplished by eight other players in league history. Roney should be the most important contributor to Tampa Bay’s offense, and Head Coach Andrew Roca is already trying to speak Roney’s AUDL MVP buzz into existence.

“Roney is still available, so he'll be our workhorse this year,” said Roca. “He'll probably be the most valuable player to any organization because he is really the crux on which we depend.”

“We're committed to growing as the season goes along,” player-coach Tyler Bacon said. “A lot of excitement going forward. We've got some younger guys, a lot of shoes to fill with the roster turnover. We've got a lot of people that are committed to the long haul, which is exciting.”

This year will offer opportunity for a variety of Aviators to step into bigger roles. Despite earning First-Team All-AUDL honors and posting career numbers in 2018 with a league-leading 58 goals, 24 assists, and 23 blocks, Sean McDougall in particular could develop.

“That's the exciting thing about where I'm at right now,” McDougall said at the end of last season. “I'm maybe at 65 percent of what I can be. I'm coming into my full athletic ability around this age, and my game knowledge is just continuously increasing.”

The Aviators will go on the road this Saturday to face the much improved San Diego Growlers in a rematch of the 2018 West Division championship game.