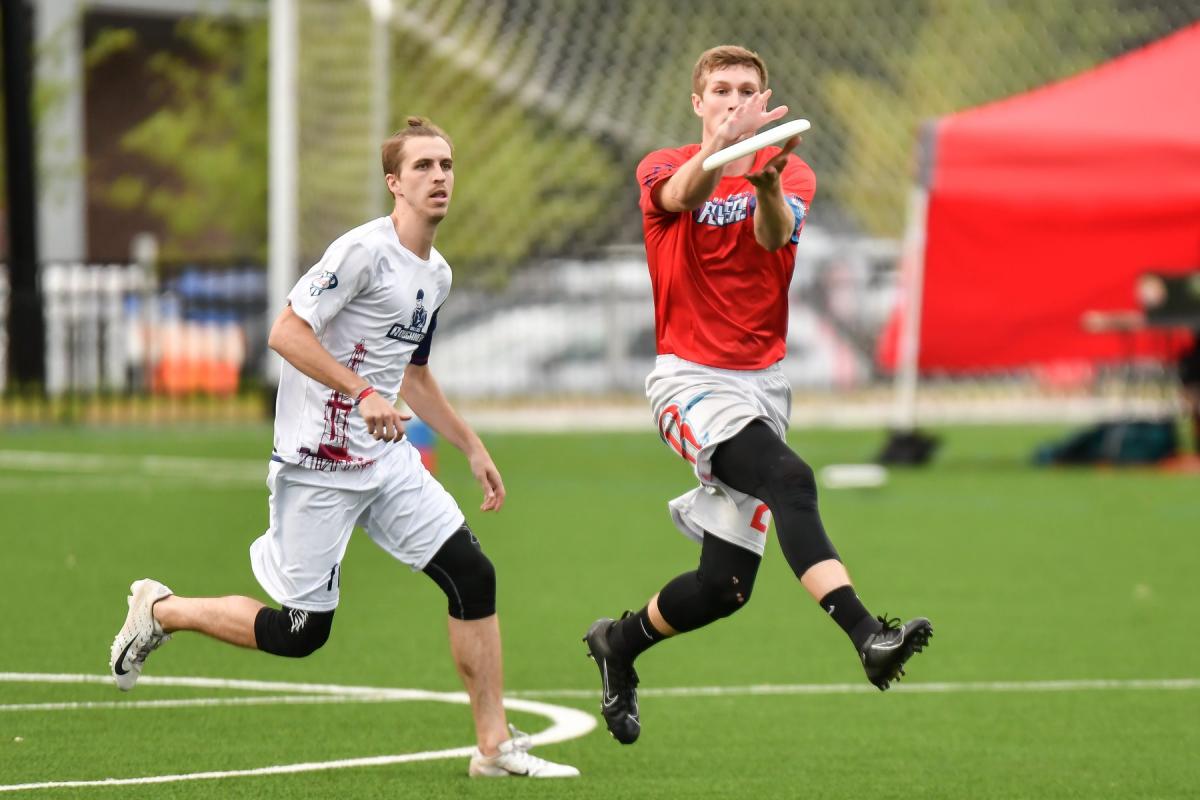 For the third straight season, the Dallas Roughnecks and Raleigh Flyers will meet in the South Division Championship Game. Dallas has taken each of the last two title matchups, but Raleigh owns the 2019 season series heading into tonight, and will play host for the second time in three postseasons to the Roughnecks. 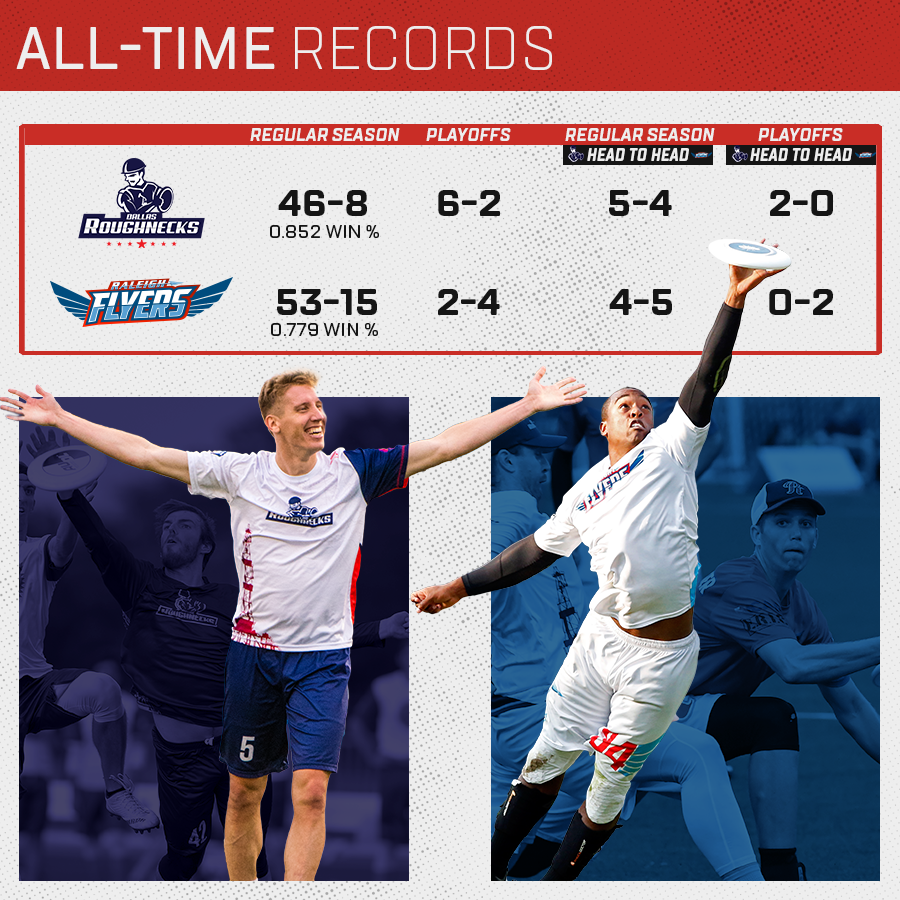 Time stamps are all Eastern Time.

6:50PM — Personally, I don't think I could ever grow tired of watching this matchup in the playoffs. Each of the past two postseason meetings between Dallas and Raleigh have been highlight packed affairs, and have featured a variety of midgame adjustments provided a dynamism to the action unfolding on the field. 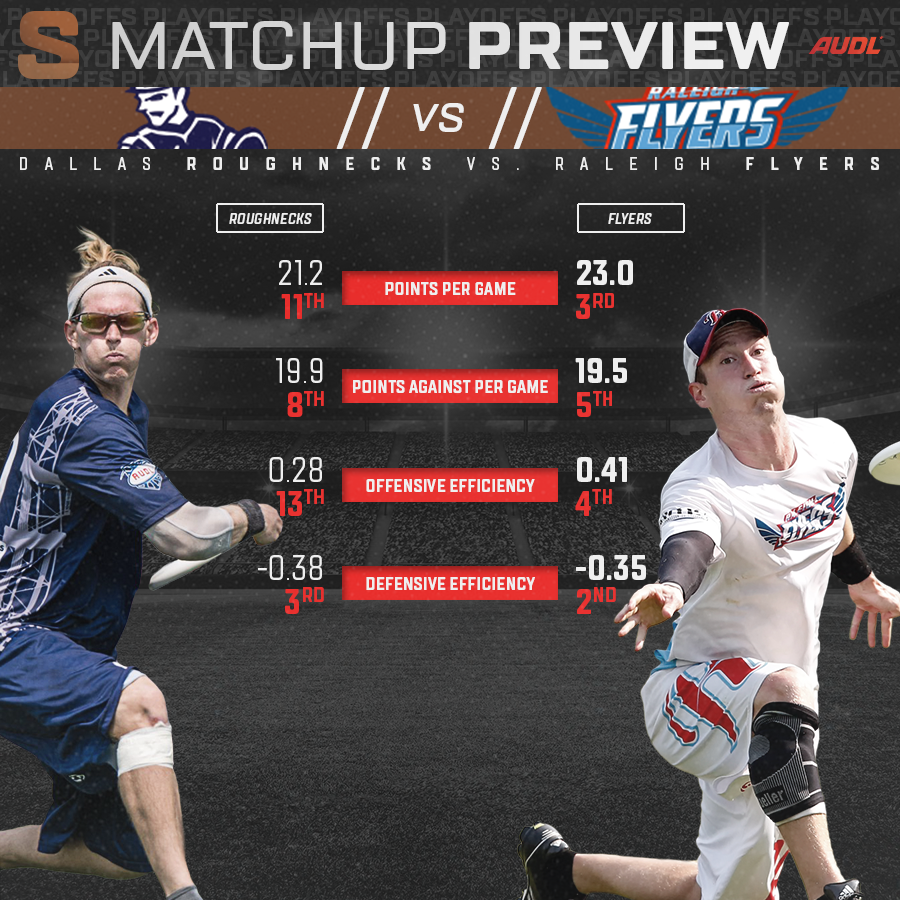 I'm really looking forward to seeing how Dallas' lockdown single coverage defense matches up agaisnt the Flyers fast paced offensive attack. Raleigh has been able to dictate pretty much at will in each of the past two matchups this season, putting up 49 goals on the Roughnecks. The rising star Jacob Fairfax has been central to the Flyers dominance, putting up nine assists and eight goals combined over his last two matchups with the Roughnecks. Mischa Freystaetter has also been a significant factor for converting O-line scores, but not in his traditional deep receiving role. Raleigh has been smartly using him to convert drives in the redzone, utilizing his 6'7" frame to boxout and dink-and-dunk the Dallas into oblivion; Freystaetter has seven goals and four assists on 41-of-42 throws in his last two games against Dallas.

7:02PM — Kevin Richardson scored seven goals in last year's divisional title matchup. I would not be surprised to see him match or exceed that tonight. He is a big receiver who loves to shine in big games.

7:10PM — Former MVP Jonathan Nethercutt is present, but not active. Raleigh going with chemistry over talent in the biggest game of the season.

7:11PM — Raleigh muffs one of their first passes of the night, and the Dallas D-line converts their first break to take a 1-0 lead. Dalton Smith hasn't played since June 15, but was orchestrating the counterattack from the handler spot.

7:12PM — After surrendering two quick breaks to the Dallas D-line, the Raleigh offense goes back to their bread and butter with a Bobby Ley set play huck to a streaking Fairfax, who easily dished Freystaetter for the score. If the Flyers can get that look, they should go to it early and often.

7:13PM — Friendly reminder that Abe Coffin is the most underrated offensive player in the league, was absent from last year's divisional championship game, and will figure in mightily to Dallas' succeses tonight.

7:15PM — Richardson's hat-with-man-bun through the back is an underrated look and I appreciate it.

7:20PM — Much like their last two losses in the South Division Championship Game, Raleigh struggling with mental errors early. They've turned it over in the shadow of their own endzone, as well as on the goalline with the potential to score in the first four points of the game.

7:24PM, Tim DeByl, Madison Radicals head coach — As a fellow coach I can really feel for Mike Denardis right now. When a team seems to have your number, you really want to come out early and get some easy goals to make your offense comfortable. Right now nothing is easy for Raleigh. They need to settle in and work the full field and get a redzone score. Everything is a little rushed, it feels like their O-line right now is trying to score quickly to relieve that pressure of being down.

7:30PM, TD — Raleigh mixed their o-line up nicely that point, took their time and got an easy goal. Dallas isn’t a team that is going to let Raleigh jump back into this game all at once. They are going to have to really be efficient with their break opportunities over the next two quarters and hope to get the game back in reach during the fourth quarter when the pressure of punching that ticket to the final four starts to kick in. You don’t want Dallas too comfortable late in the game.

7:32PM, AR — Dallas' defense just converted their fifth break of the opening quarter, completely flipping the script so far in 2019. Dallas lost as many games this season as they did in the last three years combined. But the Roughnecks love this big matchups. \

7:35PM, AR — Raleigh got lucky that Jay Froude's buzzer-beating grab in the endzone was ruled incomplete. Looked like Froude had stopped rotation for a second or more, and would've pushed Dallas' lead to six to end the first quarter.

7:38PM, AR — I like that the Flyers open the second quarter with a junk zone on defense, but it could backfire on them. The Roughnecks offense wasn't on the field much for the first quarter, and giving them an opportunity at a drive with a lot of touches might get them into rhythm.

7:38PM, TD — In that first quarter Dallas looked like they want this game more than Raleigh. Elimination games like this are usually won by the team that is playing harder and without fear. I could see that fire in Dallas in the first quarter. It’s a big moment, and Dallas has generally shown they more ready for the moment.

7:44PM, TD — The problem is Dallas’s offense looks so comfortable, so dialed in, it can be deflating for the whole team when the other team’s o-line is playing so confident and quick. Raleigh is rolling the dice a lot on O, while dallas is out there punching the clock, doing the work, and scoring easily.

7:54PM, TD — That’s a really nice timeout. It’s clear that Raleigh understands the importance of getting this first break. Also shows you still have confidence in your o-line that has struggled.

7:55PM, AR — And Raleigh wastes their first opportunity at a break with a rushed look deep to Fairfax. Down five, that feels like a bit of a backbreaker if Dallas can convert here.

8:00PM, AR — Dallas Head Coach Wes Nemec 2-for-2 in calling timeouts that averted potential turnovers. It bears mentioning that this is just Nemec's second season ever as a coach, and he's on the verge of clinching his second consecutive Championship Weekend berth.

8:03PM, AR — A total contrast in execution and styles right now. Dallas is winning individual matchups, and taking great looks with the disc in single coverage with their preferred receivers. Conversely, Raleigh is trying to force almost everything when they have possession.

8:10PM, TD — That was a huge play. Mitchell has made a couple of huge plays this game, trying to breathe some life into Raleigh. Plays like that can get your whole team believing the game is winnable. 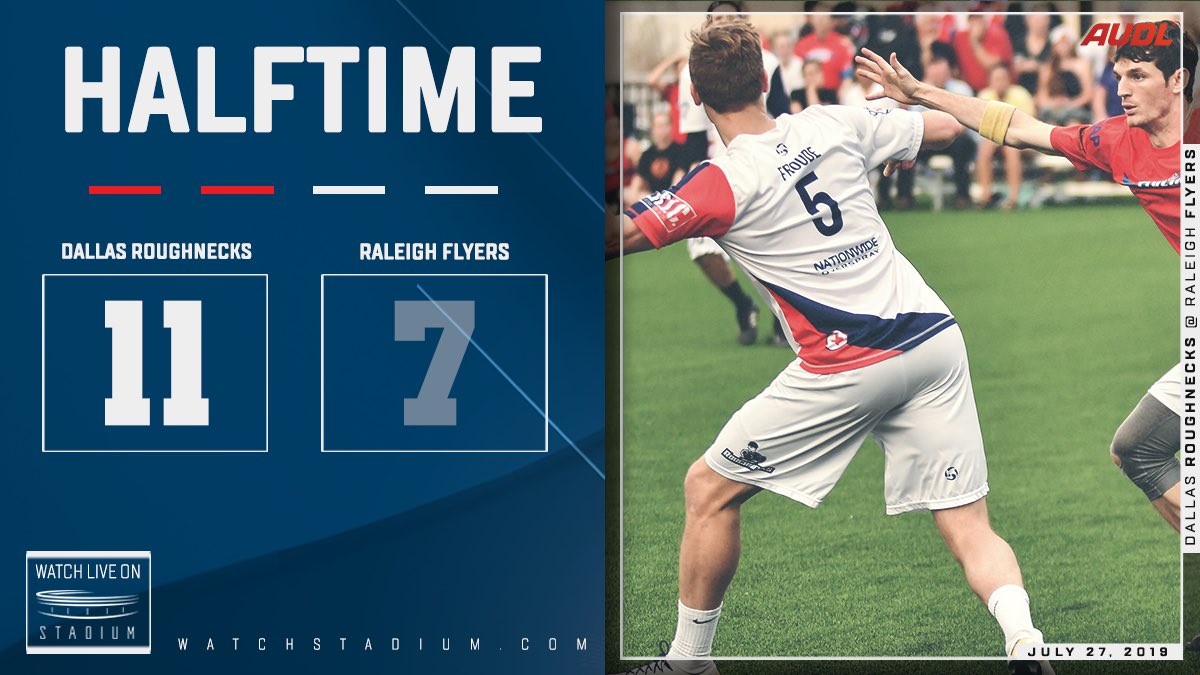 8:22PM, AR — One of the big questions entering tonight's game was "What does Dallas' best performance look like?" And against a team as talented as Raleigh, this has to be it. They're being efficient and (boringly) safe with their offensive possessions, and converting almost at will. Definsively, they're doing a great job of getting after the disc and not giving the Flyers any easy throws. The Roughnecks are continually forcing the Flyers into alternative looks and routes, and it's paying dividends with their halftime lead.

8:25PM, TD — The key to this third quarter for Raleigh is to not try to get back in this game all at once. If they can narrow it to a two goal lead going into the fourth the pressure will start to build on Dallas. Alternatively Dallas needs to keep doing what they are doing, and not worry too much about the score. It’s their game to lose right now, and they are the better team tonight so far.

8:29PM, AR – Raleigh immediately showing a passion for play here to start the second half that was clearly lacking in the first. They convert their opening possession of the third quarter, and are now knocking on the doorstep with a break opportunity to trim the Dallas lead to two. Whatever mental halftime adjustments Flyers Head Coach Mike Denardis made for his squad are clearly taking root early.

8:34PM, AR — One of the tougher defenders to quantify, Kaplan Maurer is having a great game guarding up on Raleigh's Ley. One of the shiftier handlers in the league, Ley has had virtually none of his signature throws in this matchup so far.

8:37PM, AR — Dallas has traditionally been a team that wins on grit and raw execution more than style and substance. But it's Raleigh that is playing with determination here to start the second half, and looking like they took back the momentum.

8:38PM, AR — But again, Coffin continues to execute with his legs and his throws, and punishes the Raleigh defense while pushing the Dallas lead back to three. Coffin is one of those guys who just does Good Things every time he is out there on the field, and it remains to be seen if the Flyers defense can really dissuade the Roughnecks from their rhythm.

8:38PM, TD — I really don’t like the force backhand from Raleigh, they’ve been doing it a lot tonight, but it really opens up the give and go. Abe has been killing them after the pass.

8:42PM, AR — Each of the last four Flyers scores have included Fisher or Taylor. Fisher in particular is just a matchup nightmare with his 6'6" length, his breakaway speed, and most importantly, his rookie bravado. He knows he can excel at the pro level, and he goes out there and demonstrates it every game in his first season.

8:43PM, AR — And just as I get done typing that last bit, Carson Wilder finds space easily downfield for the score. The youth talent that is starting to take centerstage in this league is phenomenal right now. It seems like every team in the league has three to five guys 24 or younger that can be star-level difference makers.

8:48PM, AR — Dallas making some great defensive matchup adjustments here late in the third quarter. Griffin Miller had been guarding Terrence Mitchell, but the Roughnecks elect to throw some size in Ben Rogers on Mitchell to give Mitchell more of a challenge in the air. Likewise, Dallas shifted big body Ben Lewis to guarding Henry Fisher; Fisher has been on fire to start the second half, and Lewis is a terrific cover option for negating Fisher's abilities.

8:50PM, TD — Overall Raleigh needs to worry a little less about pressuring dumps and do more containment of the Dallas handers. They are giving up way too many easy power position hucks.

8:52PM, AR — He won't get the assist, but the Coffin outlet huck sets up the Dallas break score to take a four goal lead.

9:00PM, AR — Getting a Coffin tattoo after this performance. He is just totally in rhythm and ready to rip the disc.