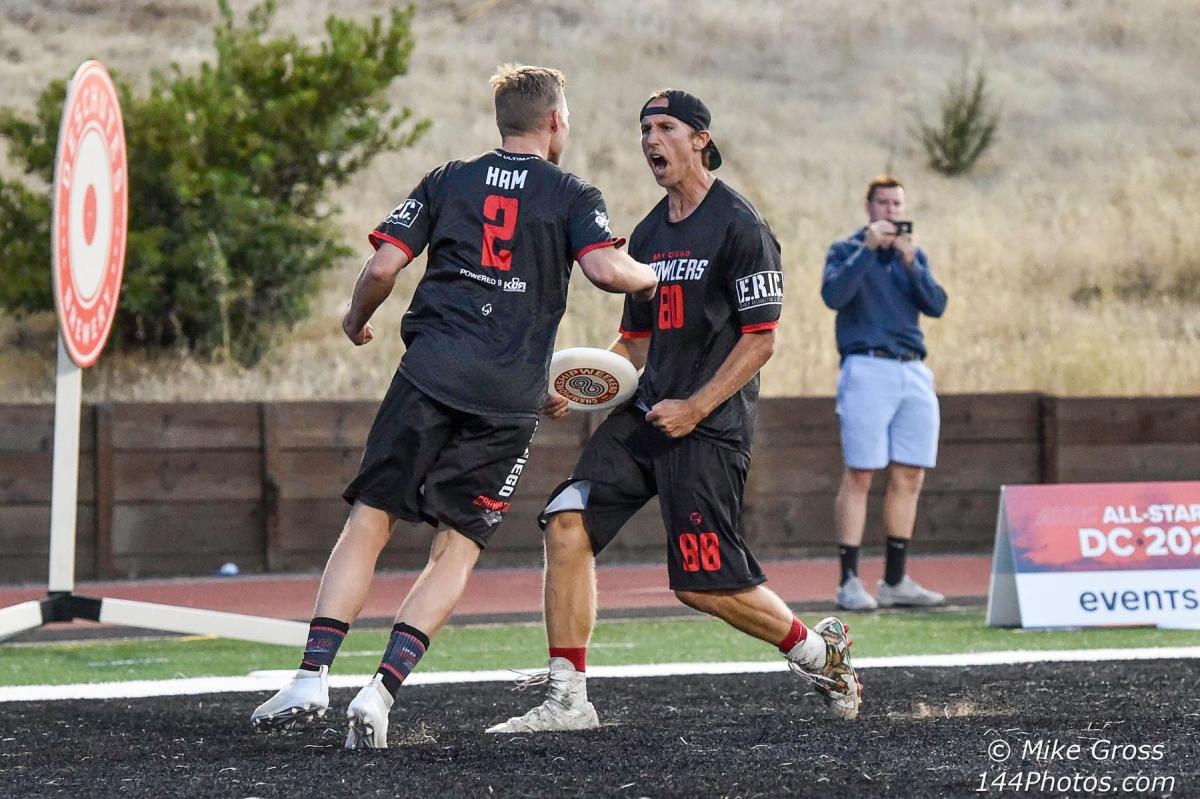 The AUDL will be making their MVP announcement in the coming days, and it's time to examine the players chosen as finalists. Rowan McDonnell is the only member of the group with the potential to repeat, and would become the third player in league history to do so if he is chosen. The list of past MVP winners is as follows: 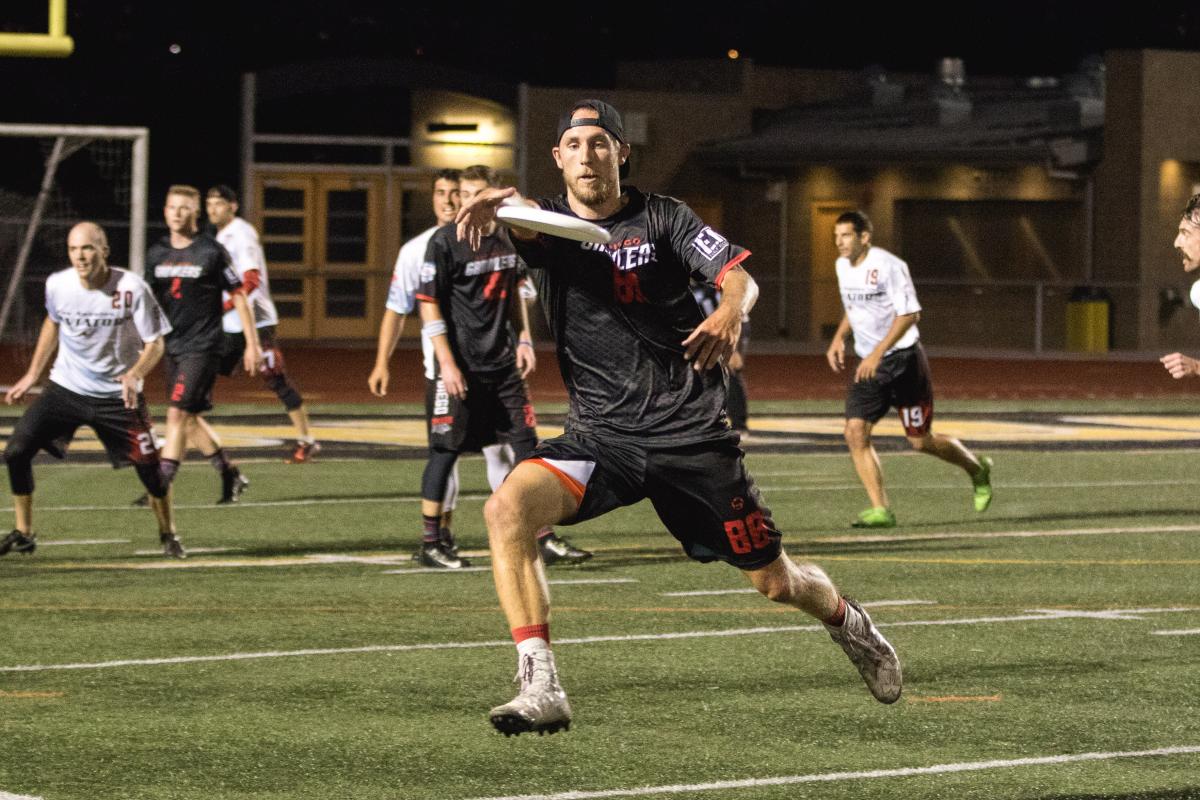 Even with back-to-back All-AUDL selections, Travis Dunn and his rock solid offensive numbers for the San Diego Growlers still feel underrated. It might be that Dunn is almost too consistent in his overall contributions as to be almost boring. Going back to the beginning of the 2018 season, he has thrown 4+ assists in 21 out of his past 25 appearances, giving the Growlers's elite offense one of the most talented distributors in the league to build around. And even with his outstanding statistical production, Dunn does some of his best work in the trenches: Initiating the offense with his cutting; keeping the handler rotations in rhythm with swing passes; providing clutch help defense; creating something out of nothing for the win.

Dunn is always in motion and always contributing, and has a unique ability to come out the superior in almost every one-on-one matchup. San Diego's offense finished second in the AUDL in scoring and offensive efficiency in 2019, largely because so much of their system is built around Dunn and his ability to flourish at any position on the field while committing so few mistakes. Even in the 2019 All-Star Game, flanked by the best players in the league, Dunn was his usual, quietly great self, contributing on 10 scores for Team Rowan and finishing as just one of four players in the game to compile over 500 yards of total offense.

Why Dunn should win: 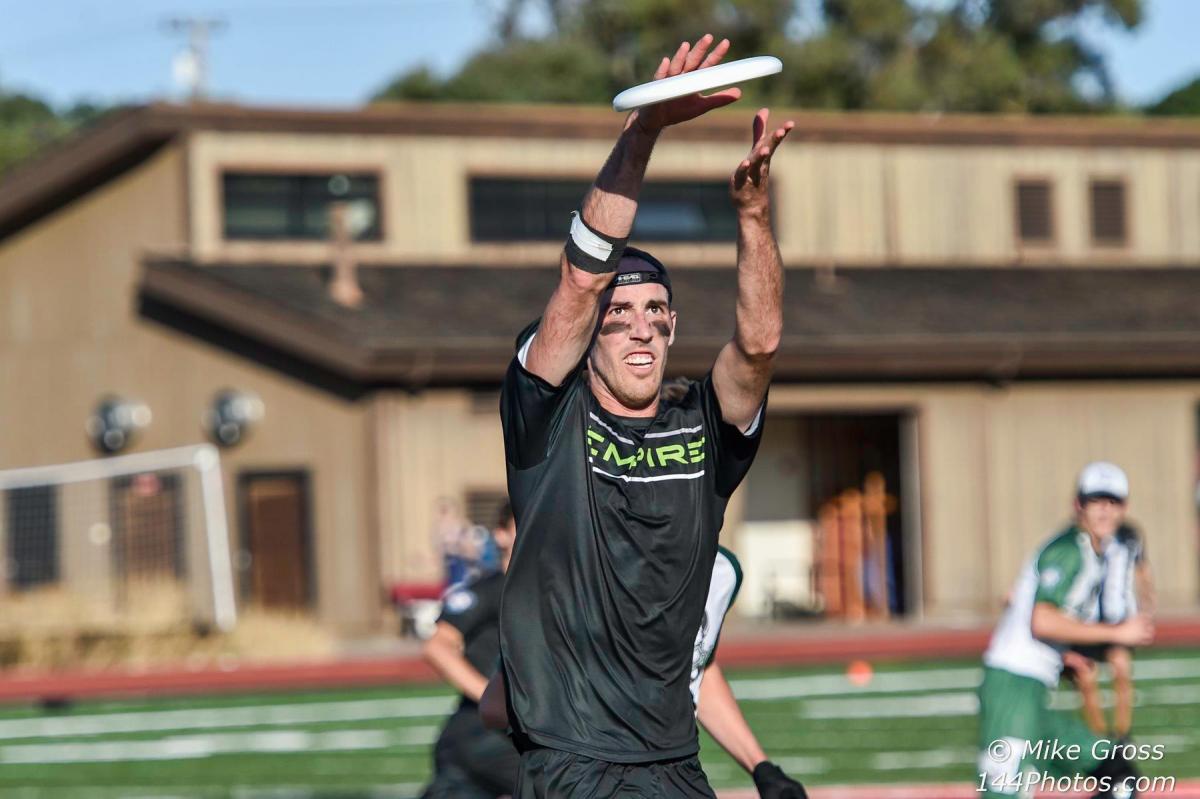 Nobody cast a larger shadow over the 2019 AUDL season than the 6'6" Ben Jagt. Seemingly every week, Jagt would post video game numbers and jaw-dropping highlights for the New York Empire en route to his team going undefeated and winning the 2019 AUDL title. Most importantly, though, Jagt came up biggest against the best teams, submitting truly MVP-type performances to help cement New York's legendary season.

Jagt has so thoroughly refined his offensive skillset at this point in his career, it's difficult discerning whether it's better to let him beat you as a thrower or as a receiver. He has always used his huge frame well downfield and in the air as a playmaker, but Jagt is now exploiting defenders on the mark with his reach, utilizing his stride and extension to power pinpoint continuation hucks that maximizes the Empire's offensive potency. And though turnovers can sometimes diminish his overall efficiency—shooters gotta shoot—Jagt submitted his cleanest performance in the 2019 AUDL Championship Game, posting 11 scores without a single turnover.

Why Jagt should win: 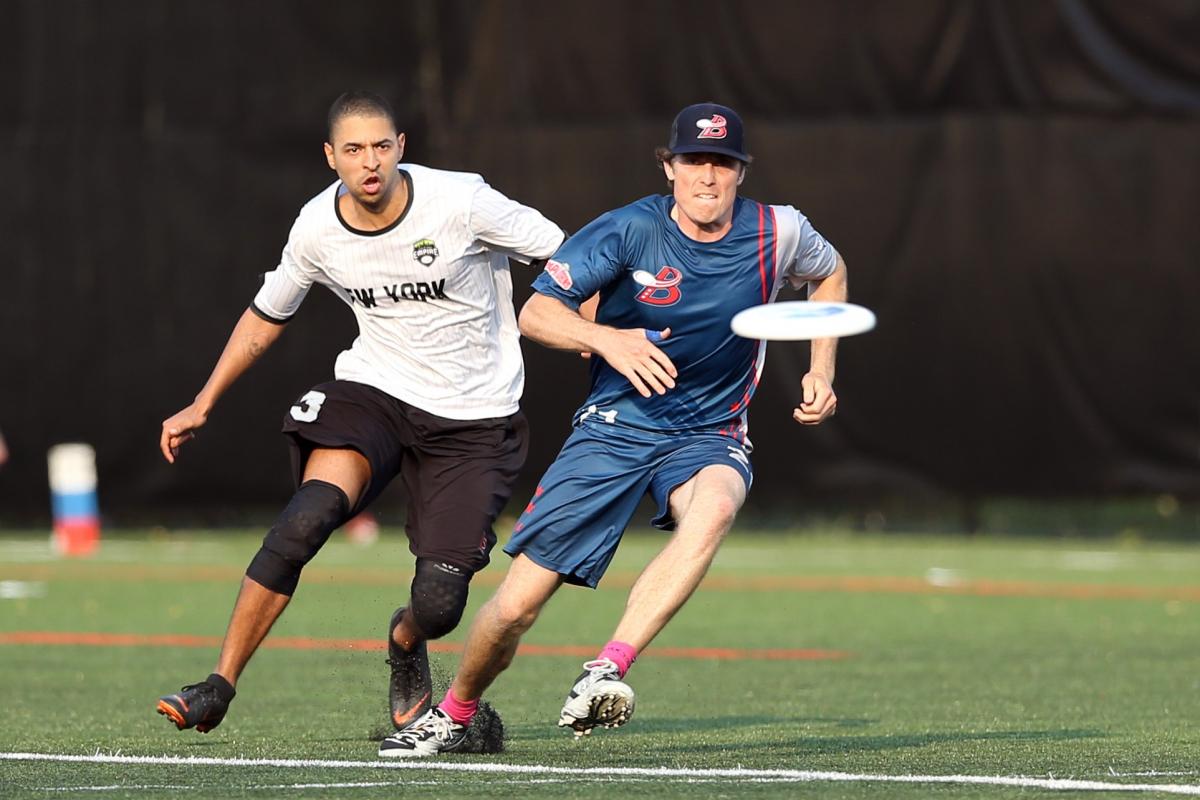 The 2018 league MVP is always improving, and Rowan McDonnell once again tweaked his role on the DC Breeze to amazing results. With the team suffering a series of roster departures over the offseason, Rowan transitioned from backfield general into one of the most dangerous downfield receiving threats in the AUDL, utilizing his gamechanging speed and ability to read the field to help DC reach their fourth straight playoff appearance. And while it is easy to get hung up on his eye-popping, career best numbers as a goal scorer, Rowan was still just as deadly as ever as a thrower in 2019, equaling his MVP production.

What really stands out above the numbers, though, is Rowan's fire as a leader and competitor. Even before the season began, and with archrival New York adding All-AUDL talent through free agency, Rowan confidently declared his young-and-untested Breeze squad would challenge them in any meeting; DC lost by just five goals combined in three meetings in 2019 with the eventual champions. Down six goals in the third quarter of the All-Star Game to a favored Team KPS squad, Rowan was central to his team's comeback, quarterbacking drives and earning blocks down the stretch to force double overtime.

Why Rowan should win: 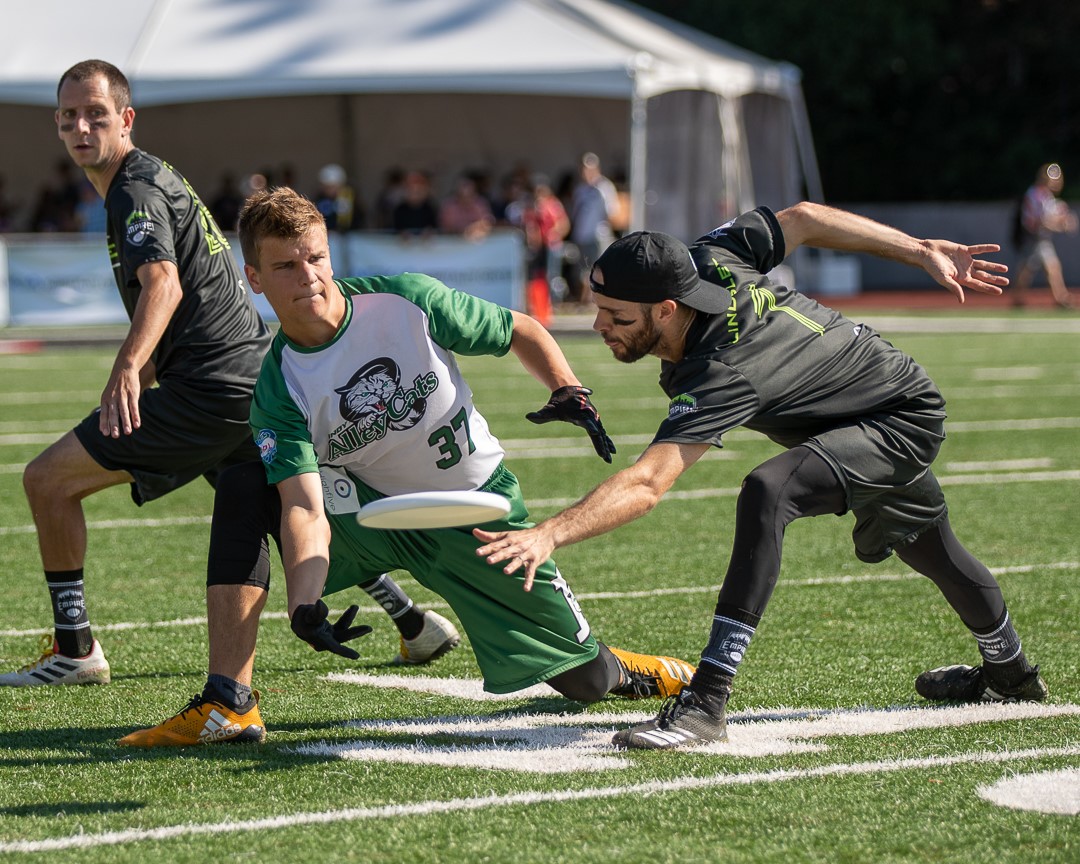 As one of just six players to play in every AUDL season since the league's inception, nobody has worked longer or harder to be on this MVP finalist list than Travis Carpenter. From an 18-year-old, end-of-the-bench rookie in 2012 to face of the Indianapolis AlleyCats franchise that won the Midwest Division in 2019, Carpenter has made incredible developments over the years both as an individual player and team leader. Carpenter has refined one of the more diverse skill sets in the league, and he employed it with incredible situational effectivness during his team's final four run this year, switching seamlessly between roles as a thrower, receiver, and shutdown defender.

Indy has long been regarded as the kid brother in relation to their divisional foes, and Carpenter emphatically helped to put that storyline to rest this year. The 'Cats went 7-3 against their rivals from Madison, Chicago, Minnesota, and Pittsburgh, winning each of their season series for the first time in franchise history, and with Carpenter contributing major plays in virtually every matchup. Even down a handful of goals against the heavily favored Empire in the semifinals, Carpenter continued to make things happen for Indy, never giving up the fight.

Why Carpenter should win: 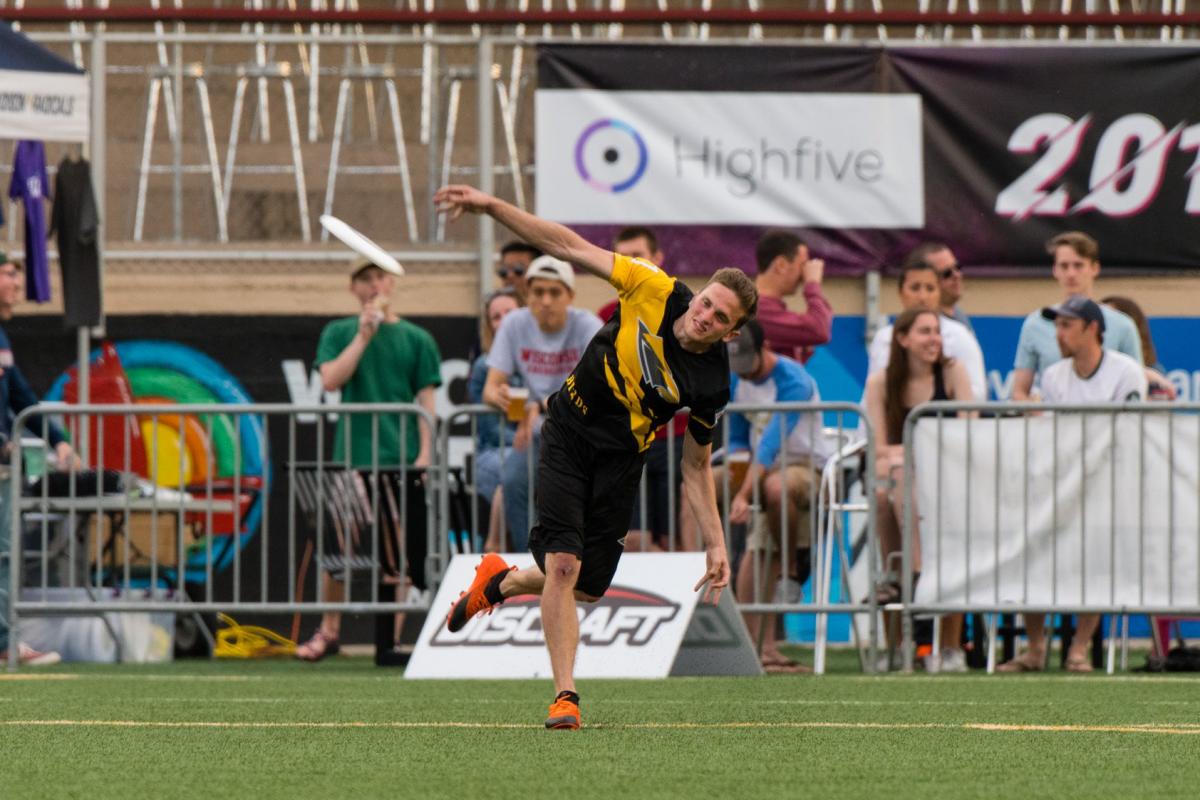 After his electric offensive season and All-Star Game MVP performance, it's hard to remember Max Sheppard started 2019 platooning on the defensive line for the Pittsburgh Thunderbirds. But after an 0-3 start, the Thunderbirds shifted Sheppard to offense and gave their star playmaker the green light, winning nine of their next 10 games in the process. During that stretch Sheppard did a little bit of everything for the T-birds offense, averaging over 10 scores per game while throwing 52 assists and scoring 49 goals, utilizing his demonic speed, creative vision, and aggressive throws to punish every defense in the Midwest Division.

Although he's shown glimpses of his talent for years, Sheppard fully evolved in 2019. Equipped with the best wheels, cutting instincts, and hammer in the division this season, Sheppard used his feet and throws in equal parts to shred coverages, and favored a lot of crossfield shots into space with either his hammer or flick blade that he wielded like a mortar shot, angling high velocity passes above and around helpless defenders. This sequence during the All-Star Game encapsulates Sheppard at his best: Speed and a great read to get into an advantageous position, pogo stick hops and swat, leading the counterattack with his frenetic pace, and then dropping in a perfect 40-yard hammer into the dead space along the opposite sideline.

Why Sheppard should win: