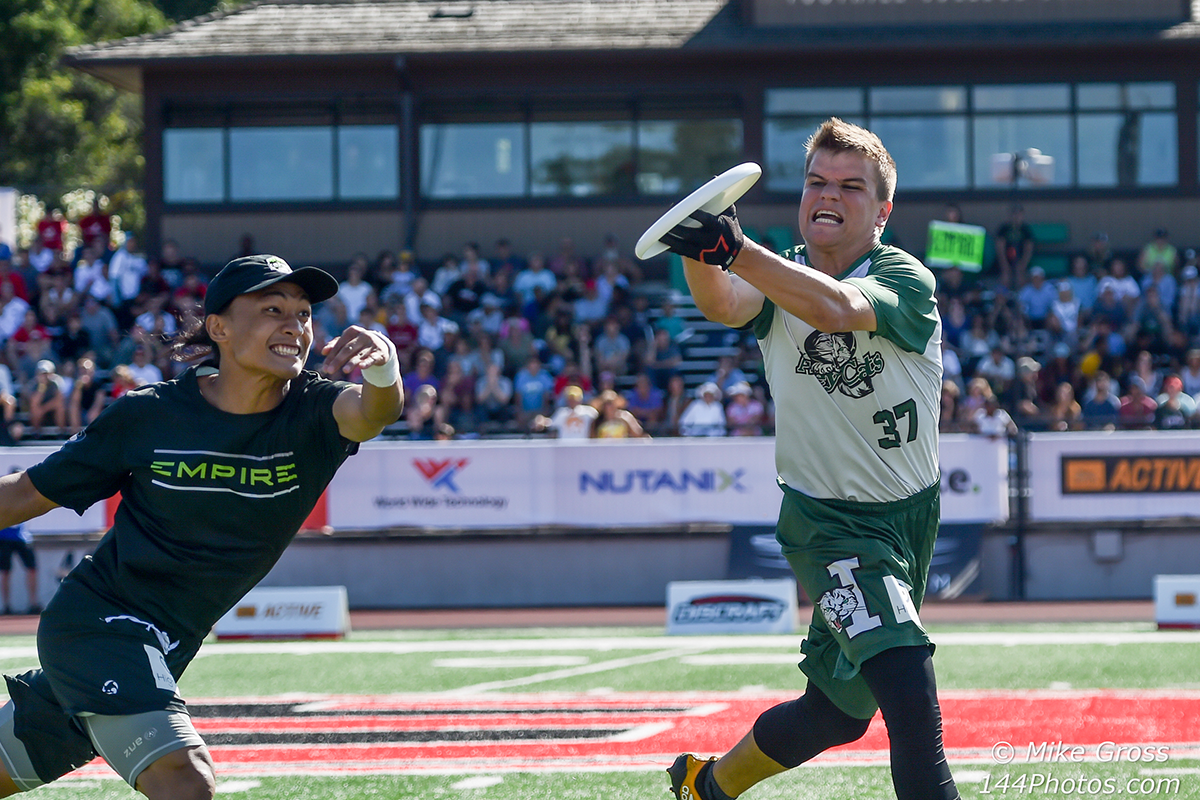 One of the original six, 26-year-old Travis Carpenter has grown from end-of-the-bench teen into the face of the Indianapolis AlleyCats. His intensity is unmatched; “The Kid” regularly makes hustle plays on both offense and defense. Even from the time he was an 18-year-old rookie, Carpenter has always played with a chip on his shoulder. That chip—along with years of hard work—helped him earn First Team All-AUDL honors in 2019, leading the ‘Cats to a semifinals appearance at Championship Weekend.

Carpenter’s athletic ability has always been there. The Kid runs hard, plays with a ferocity, and consistently makes plays. In my opinion, he is among the league’s best when it comes to laying out, rarely hesitating to leave his feet and doing so with perfect form. His ability to bid effectively is impressive, but it’s his quickness and closing speed that often creates layout opportunities. Typically operating out of handler sets on offense, Carpenter’s strike cuts have led to numerous goals over his career, as he’s frequently able to outrace his matchups with his acceleration. His cutting instincts make him that much more difficult to defend, constantly presenting a threat with or without the disc. Defensively, Carpenter is always lurking, scanning the field and positioning himself to make plays when they’re needed most.

While his athleticism gives him an edge, it’s really his motor that makes him such a tough matchup. He wants to make his defender’s life as difficult as possible on every possession. Take the below play, for example.

The sequence starts with Carpenter hitting Alex Henderson on a quick five-yard throw which he immediately follows—Carpenter follows virtually every throw within 20 yards, and never lets his defender rest. Looking to get the disc right back, Carpenter sort of gets caught in no man’s land, as Henderson is trapped on the sideline and Pittsburgh Thunderbirds defender Jack Hefferon is well positioned to take away any continuation passes. And to Hefferon’s credit, he plays this well! He took away what he was supposed to, and he probably wouldn’t have gotten scored on had his matchup been anyone but Carpenter. Knowing he needs to clear out, Carpenter takes one step back towards Henderson before planting and taking off hard up the near sidelide, and Henderson tosses a leading forehand into the end zone. A signature Carpenter layout follows, pretty as ever, and the AlleyCats get a huge momentum swing in the divisional championship game.

The play really encapsulates Carpenter’s drive and lead-by-example mentality. He may not have intended for the strike cut to be anything more than a clear out to free up space for a teammate. But Henderson saw a hard cut, and he trusted his captain to make the play. A layout, two head smashes, and a spike later, Carpenter reminds his team why they rally behind their emotional leader—you would be hard-pressed to find another player who can single-handedly fire up a team the way Carpenter can. 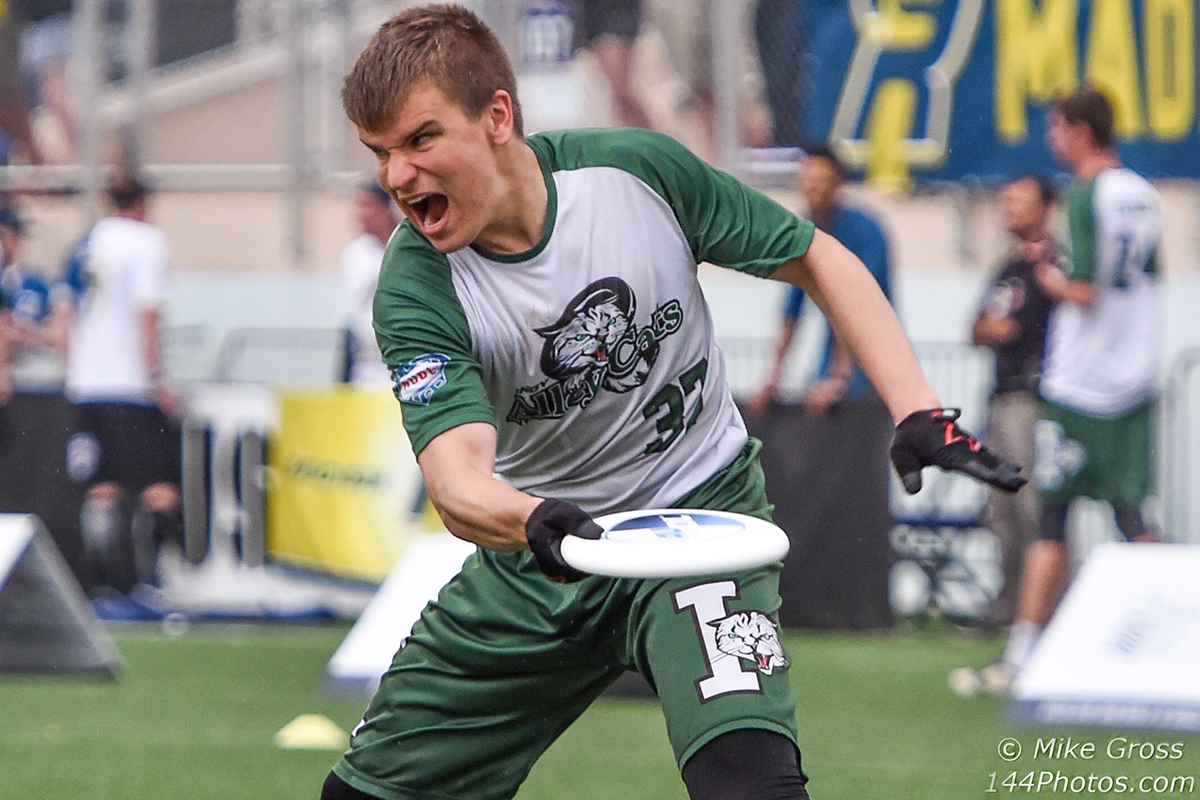 While he didn’t get an NFL comparison in Adam Ruffner’s article from earlier this offseason, Travis Carpenter is a prototypical quarterback. He’s a motivator and a distributor who makes his teammates better with both his leadership and on-the-field ability. Carpenter is the engine that has driven the AlleyCats to the top of the Central Division.

A true field general, the AlleyCats’ offense typically runs through Carpenter as the center handler. When the offense is stalling, you want the disc in Carpenter’s hands. He takes charge of the offense and isn’t afraid to direct traffic, putting his players in the best positions possible to make plays. He’ll use his quickness to exhaust defenders, and he’s adept at using throw-and-gos to keep his marks off balance and keep the offense moving. As Indy’s primary offensive weapon, Carpenter scored or assisted on 28.5 percent of AlleyCats scores last season, the ninth-highest percentage in the league among individual players.

Carpenter and the offense play relatively conservatively for the most part, perfectly content to work the disc down the field with swings and short passes. Despite the slower-paced offense—Indianapolis ranked fourth in the league in completions per game—Carpenter is more than willing to shoot deep when the opportunity presents itself. His hucks and willingness to throw them helped him to a career-high 54 assists in 2019, good for sixth-most in the league. He took his shots while limiting throwaways; of the 35 players with at least 30 assists in 2019, Carpenter ranked eighth in completion percentage, valuing each possession while maintaining an aggressiveness to get his teammates the disc in the end zone.

A talented athlete with an impressive command over his offense, The Kid brings one more trait to the table that can’t be taught: Travis Carpenter is as clutch as they come.

Key divisional game late in the season against a talented Minnesota team? Carpenter racks up seven assists and three goals, including the game-winner. AlleyCats looking to win in Madison for the first time ever? Three blocks and four scores in a three-goal victory. Midwest Division Championship? Two blocks, six scores and a ticket to Championship Weekend. Carpenter consistently performs in the biggest moments (including in showcase games in front of 60,000+). He willed the 'Cats to a first round bye and a Midwest championship last season. Scary to think he’s only just entering his prime.