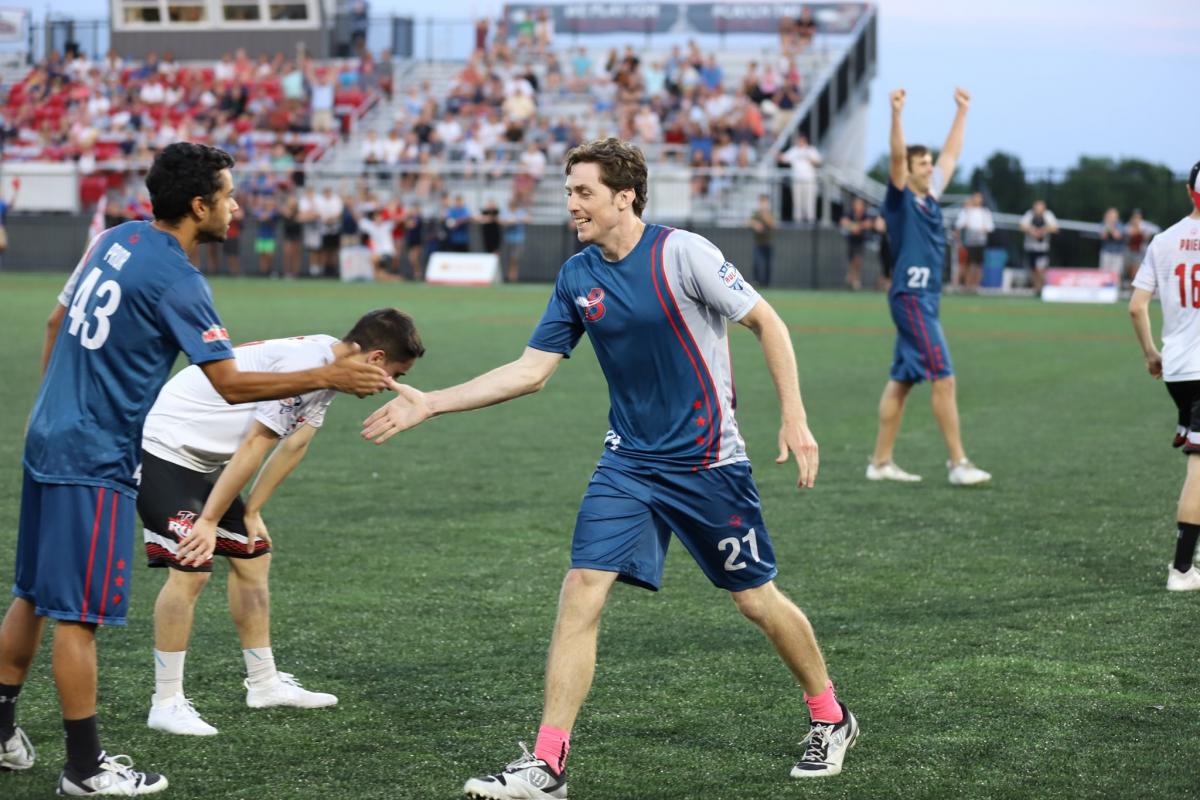 For the second straight season, Rowan McDonnell earned First Team All-AUDL honors as the centerpiece of the DC Breeze offense. The recipient of the AUDL’s 2018 Most Valuable Player award, Rowan continued to dominate in 2019, topping his 2018 totals in goals and plus/minus. Rowan scored or assisted on a ridiculous 40.8 percent of all Breeze scores in 2019, the third highest percentage in the league. Putting on clinics week in and week out and still seemingly improving, he has quickly established himself as one of the most well-rounded players in the world.

Able to put on a show as both a handler and cutter, Rowan is one of the most versatile athletes in the game. Whether he’s shaking defenders on downfield cuts or opening up the offense with his throwing range, Rowan makes life extremely difficult for defenses.

First, Rowan is super quick. And also fast. He possesses an elite ability to change direction and keep his defenders off-balance, which can be seen regularly in both his downfield cutting and his routes that start from the handler space. More impressive than his raw ability, however, is his field awareness and instincts. Put simply, Rowan makes the right cuts at the right time, often finding himself wide open on underneath cuts or running onto floaty hucks out to open space.

Rowan’s willingness to huck off downfield continuation cuts is one thing, but his buttery smooth deliveries are another. Rowan doesn’t hesitate to launch his precision flick hucks, and he looks for them frequently. Few in the league carry the same versatility when cutting downfield. Having a player that can cut aggressively downfield and unload 50 yard dimes opens up endless possibilities for the Breeze offense.

With quickness, sharp throws, and good instincts, Rowan often uses throw-and-gos to initiate the offense, specifically in red zone sets. Equally as dangerous on the move as he is from a standstill, Rowan is able to lean into his throws to get a quick step on his defender, following the throw thereafter to give his receiver an easy dish. This movement makes him a huge asset in the red zone, keeping defenses on their toes by constantly changing the offense's angle of attack. Being a constant throw-and-go threat, Rowan puts his marks in a very uncomfortable position, as they look to contain both his quickness and his many throws.

Rowan is a bit of an ultimate celebrity due to his trick throw videos. While they may seem gimmicky on the surface, his dedication to mastering the art of throwing has made him extremely dangerous whenever he has the disc.

With throws including high release two-handed backhands and low release inside flicks, Rowan is a nightmare to mark one-on-one. Additionally, his ability to break double teams with ease makes life a lot easier for the entire offense. Often throwing short scoobers (with either hand) at a crazy high success rate, Rowan renders opposing double teams useless, forcing the defense to play catch up for the next few throws as the offense continues downfield.

Many players have good jumping ability, but players that can high-point the disc with consistency will always have an edge over their opponents. Rowan is a perfect example. Frequently coming down with underthrown hucks and rising up to get blocks on taller opponents, he rarely mistimes a jump and repeatedly makes plays in the air. Rowan’s ability to high-point the disc combined with his speed makes him a more than capable downfield defender, not to mention a constant offensive deep threat.

Rowan McDonnell is one of the most fun players to watch in the league. He has led the Breeze in goals and assists each of the past two years by a considerable margin. Look for him to be right back in the MVP conversation again in 2020.