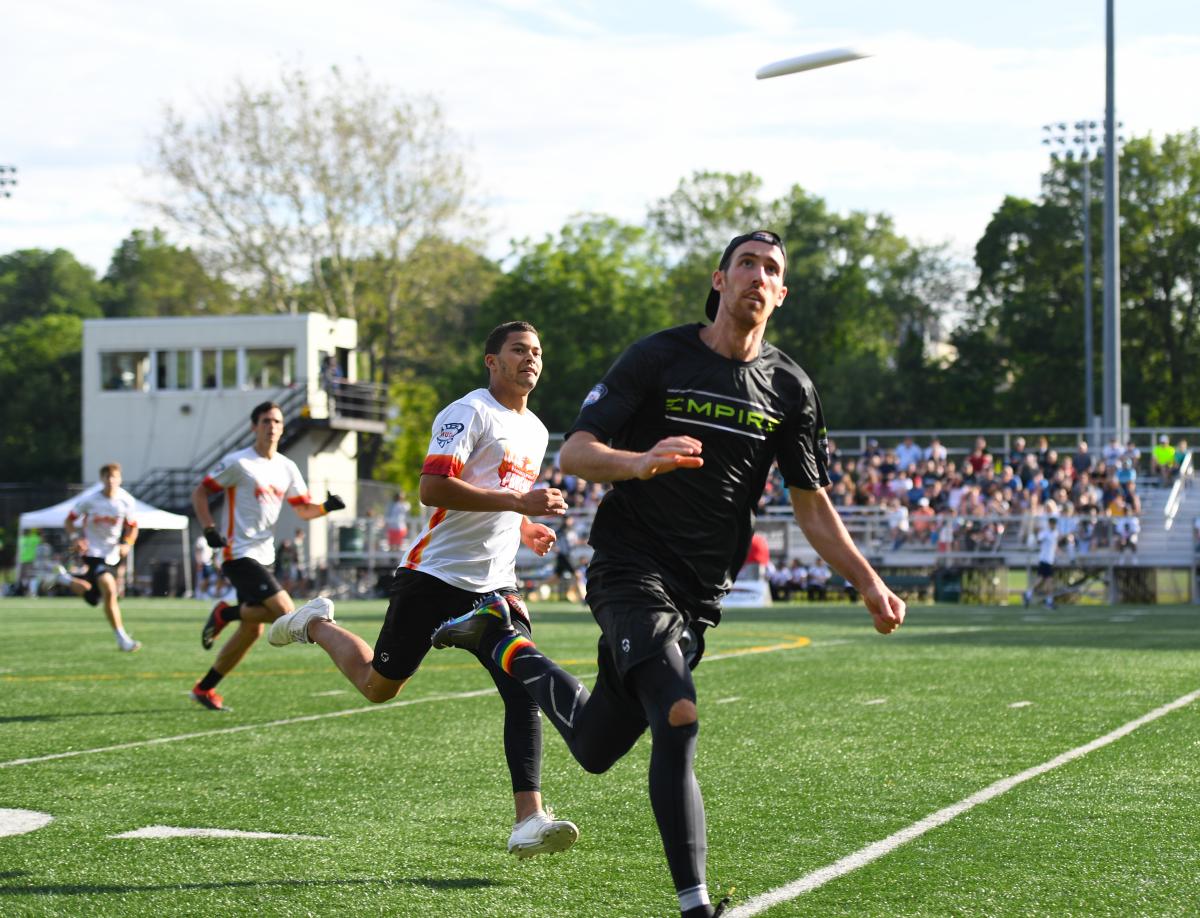 There’s really no effective way you can guard Ben Jagt. Take away his in-cuts, and he burns you with a perfectly executed deep cut. Position yourself behind him, and you concede him a 20-yard under, from where he proceeds to launch a 40-yard huck to a streaking teammate. Challenge his athleticism and play him tight, and he uses his towering 6’6” frame to win 50/50 balls with ease. This lethal skill set has created an MVP and one of the most dangerous offensive players in the league — a guy that’s had over 100 total scores (goals plus assists; including playoffs) in back-to-back seasons. Again: that is 252 combined scores in just the past 31 games. No player has had more combined scores in a two-season stretch in AUDL history.

Obviously, Jagt jumps out on the stat sheet. Aside from his scoring output, Jagt accounted for over 600 total yards in the inaugural 2019 AUDL All-Star Game and exactly 1,000 yards between his two games at 2019 Championship Weekend. But what impressed me most this past season was his ability to stand out on a team loaded with talent. Possibly the most talented roster the AUDL has seen since the 2016 Dallas Roughnecks, the New York Empire came into the year with five (!) former All-AUDL members, a two-time AUDL MVP, and a former AUDL champion in Grant Lindsley. With so many playmakers on the O-line, personally I didn’t think Jagt would come anywhere close to his 2018 numbers. But he proceeded to not only match, but surpass, his 2018 scoring output, joining the exclusive 50/50 club as one of just five players in AUDL history to throw 50 assists and score 50 goals in a season. Jagt proved that he is the integral piece to the Empire offense.

The first thing that stands out about Jagt is his height. More impressive than his ability to consistently come down with 50/50 balls, Jagt makes hard, quick, and well-timed deep cuts. Often operating on iso cuts out of a vertical stack, he does a great job selling his defenders on in-cuts before planting hard and changing direction, quickly gaining separation with long strides. It can often get lost in his enormous archive of highlight-reel plays, but Jagt is routinely able to get multiple steps on his defenders through his strong, fundamental cutting ability.

The Empire offense would not have been what it was in 2019 without Jagt. With his size, speed and outstanding cutting ability, Jagt commands added attention on the field that simplifies offensive flow for the rest of the lineup. It’s rare to see him bust deep and not take two or three defenders with him. Even if he doesn’t get the disc, his movements allow the offense to open up and fully utilize its various weapons.

While Jagt’s defense-warping deep cuts already make him a nightmare matchup, it’s his propensity to shoot as a thrower that has made him one of the league’s premier offensive threats. Jagt is looking end zone pretty much every time he gets the disc; few players have as aggressive of a playing style. And his teammates know it. Watch Matt Stevens or Conor Kline cut alongside Jagt, and like clockwork you’ll see them regularly cutting deep when Jagt gets the disc in his hands. While he’s comfortable throwing regardless of the force, Jagt’s preferred tool is a powerful leading backhand, which he often uses to hit his teammates in stride 40-plus yards downfield. To say Jagt is confident in his throws is an understatement; he can and will launch the disc out to open space if he sees even a sliver of separation.

His rare skill set and statistical dominance is reason enough for MVP consideration, but Jagt’s clutch performances throughout the season really cemented his case as the league’s best player in 2019. In the Empire’s three one-goal wins last season, Jagt racked up 42 scores and 4 blocks, including games with 15 and 17 scores against Raleigh and DC, respectively. Down two goals to Raleigh with just over a minute left, this throw showcases Jagt’s aggressiveness, accuracy, and confidence in clutch moments.