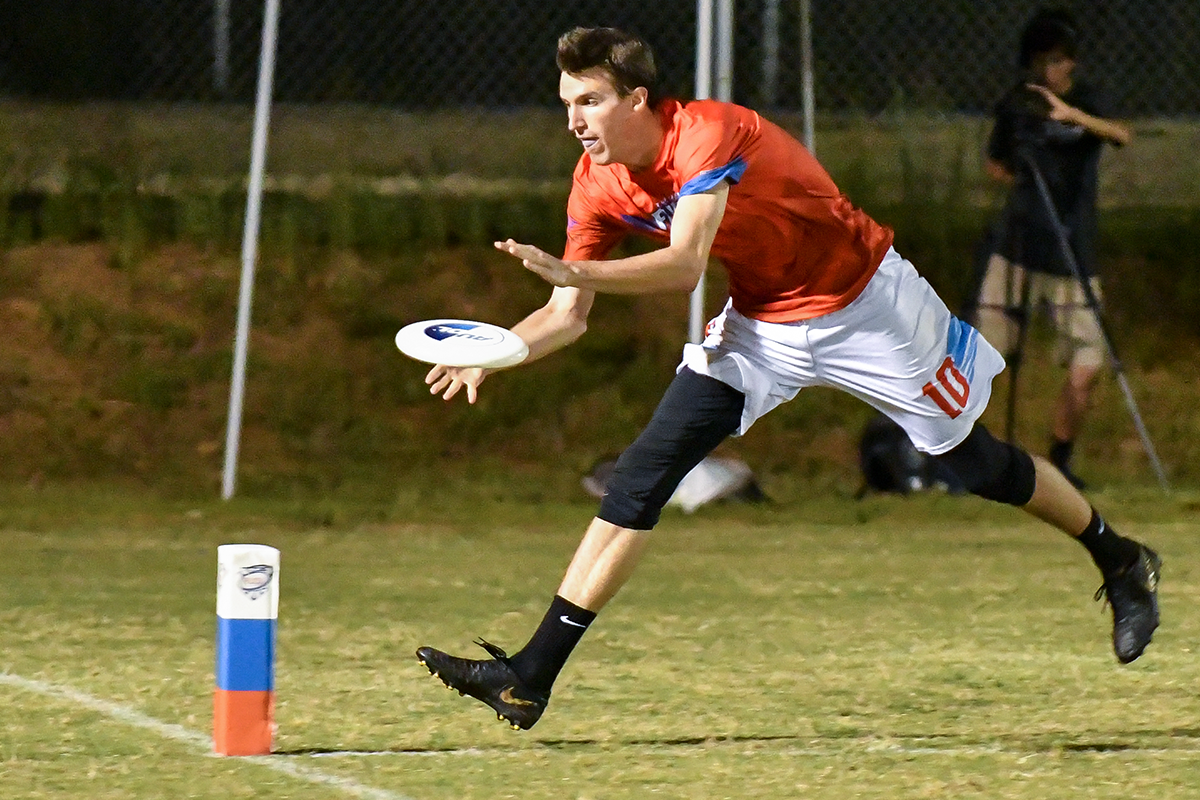 Henry Fisher took the league by storm in his Week 1 debut against Dallas, tallying three assists, seven goals, and a game-high +8 plus/minus. The 10 scores wound up being his most in any game in 2019, but make no mistake, Fisher was every bit as impactful in his other eight games. At 6’6” with lengthy strides and impressive acceleration, Fisher’s skillset complemented every Flyers teammate put on a line with him.

Scoring goals came easily to Henry Fisher in 2019 and it’s no surprise why; his unique combination of size and speed makes him nearly unguardable. He moves extremely well for a guy of his size, never needing more than a few steps to reach his top speed. He routinely beats matchups deep for gamebreaking plays, and he commands attention from the entire defense whenever he is on the field.

The above play gives you an idea of just how much of a matchup nightmare Fisher is. Before he even begins his cutting sequence, Fisher shows good awareness and field sense to direct teammate Eric Taylor to throw to a wide open Jacob Fairfax down the left sideline. Taking off downfield as soon as Taylor makes the throw, Fisher quickly goes into an all-out sprint looking for a continuation huck from Fairfax. Fisher’s defender, New York Empire’s Ryan Holmes, does a pretty good job sticking with him, and Fairfax instead opts for a swing back to Taylor. By this point, Fisher has cleared out of the deep space and into a hard in-cut, looking to immediately give his fellow rookie teammate an option. Poaching the lane is New York’s Matt Auletta, which may have been a problem for any other pair of teammates, but this is a situation both Fisher and Taylor know they can adjust to. Showcasing their chemistry from years of college play, Fisher stops, hesitates, and accelerates with signature strides back towards the end zone after a pump fake from Taylor. Taylor lofts a beautiful leading backhand out to Fisher, who is able to track it and make the grab for the early goal.

Fisher makes deep cuts look effortless, but there’s often a lot of timing, development, and incredible amounts of hustle that goes into them. Fisher’s cuts in this sequence—deep, under, then back to deep—were done in quick succession, each being executed at 100 percent. Later in the game, Fisher outmaneuvers Marques Brownlee for a goal, setting up a beautiful s-cut that causes Brownlee to stumble, and then making his way back all the way across the field for a wide open goal. Fisher makes plays like this all the time, getting wide open and it looking like there was blown coverage, or that there was a hole in the zone, or something. But in reality, he is just constantly destroying his matchups.

Fisher’s final stat line in 2019 was just as impressive as watching him live: 13 assists, 38 goals, and 160 completions in eight games. And to top it off, Fisher had just three turnovers (three throwaways, zero drops) the entire season! He took extremely good care of the disc, including when he’d occasionally drop back into handler sets - an aside: there are few things more unstoppable than 6’6” Fisher and 6’7” Mischa Freystaetter running handler weaves in red zone sets.

Fisher proved to be a key weapon for the Flyers in 2019, and the team has a lot to be excited about for the foreseeable future.