With five of the six teams in the Midwest Division within one game of first place, Week 12 was a critical week for both the first place Indianapolis AlleyCats (5-3) and the fourth place Minnesota Wind Chill (5-4). The teams faced off in Indianapolis, with the AlleyCats looking to strengthen their first place hold on the division, and the Wind Chill eager to climb firmly into the playoff picture.

An even, back-and-forth battle throughout, the indoor environment loaned itself to fast-paced action featuring plenty of highlight reel plays by both teams. With two and a half minutes left in the fourth quarter, the score was 22-22, and the AlleyCats had the disc at midfield coming out of a timeout. A Keegan North swing to Travis Carpenter sets up a Rick Gross deep cut with Wind Chill defender James Kittlesen following close behind. Carpenter puts up a flick to the middle of the end zone, and two additional Wind Chill defenders peel off their matchups to help deep. Gross finds himself in the middle of the three defenders as he looks to track the disc, and after some contact, his feet appear to get tangled up as he falls down to the ground and the Wind Chill record the takeaway. Gross stays lying on the ground, and the refs blow the whistle signaling injury. Kittlesen appears to say something to Gross, and proceeds to invoke the Integrity Rule, giving the AlleyCats the disc on the goal line. Cameron Brock catches a goal on the very next throw.

“Because of the injury, I had time to analyze it,” said Kittlesen to Evan Lepler in the Week 12 Tuesday Toss. “While I thought he didn’t have a chance to actually make a play on the disc, it did feel like he got bumped to the left and then tripped on me. A few minutes before the foul, Gross had commented to me how good of a game it was, to which I responded, ‘This is super [bleeping] fun!’ We’ve been playing against each other for years, and I respect Gross as a fair player, so I told him ‘if you think that was a foul, I’ll call integrity.’ He responded that he got decked, so I called integrity. In the moment, I was just thinking I want to beat these guys without any controversy.“ 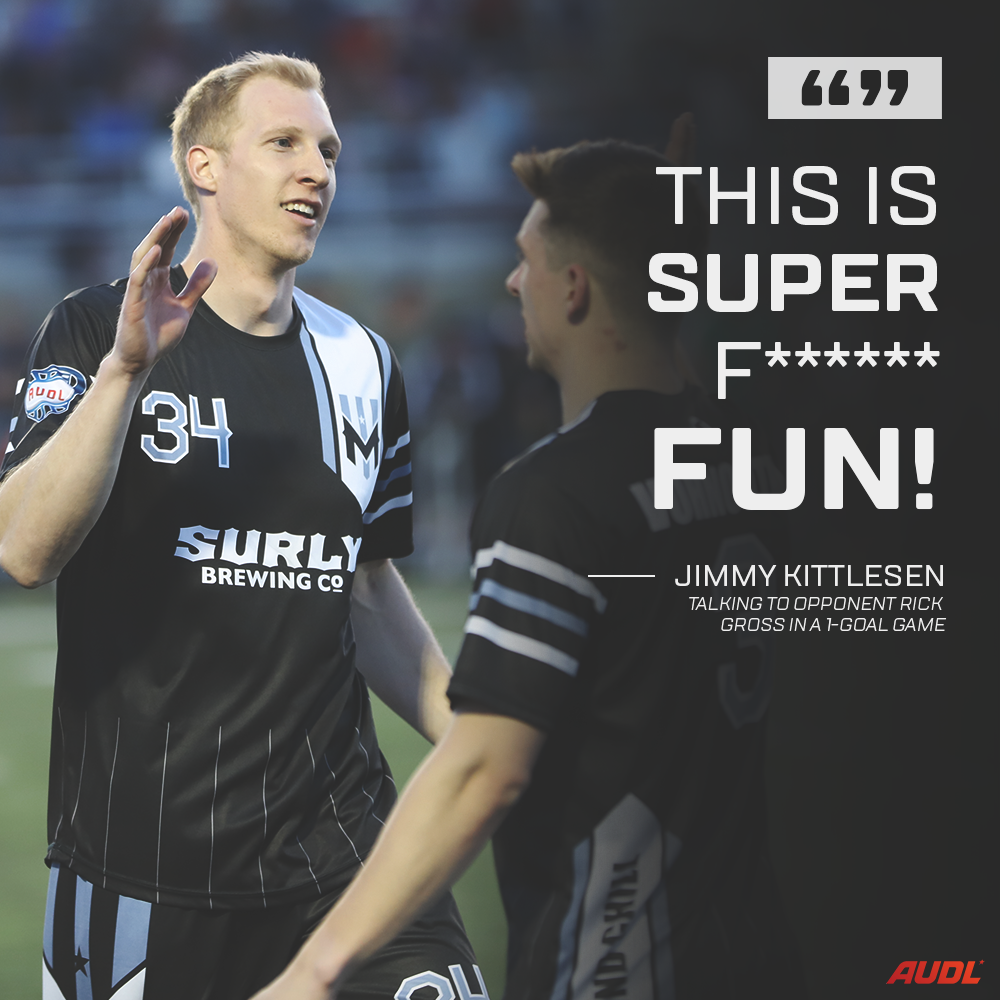 Ending in an AlleyCats buzzer-beating game-winner, the win put the AlleyCats in position to clinch first place and a first round bye two weeks later. The call made by Kittlesen is a perfect example of the potential impact of the league’s Integrity Rule, with this call playing a huge role in the outcome of the game. Kittlesen would later be announced as the Wind Chill’s nominee for the AUDL Integrity Award.