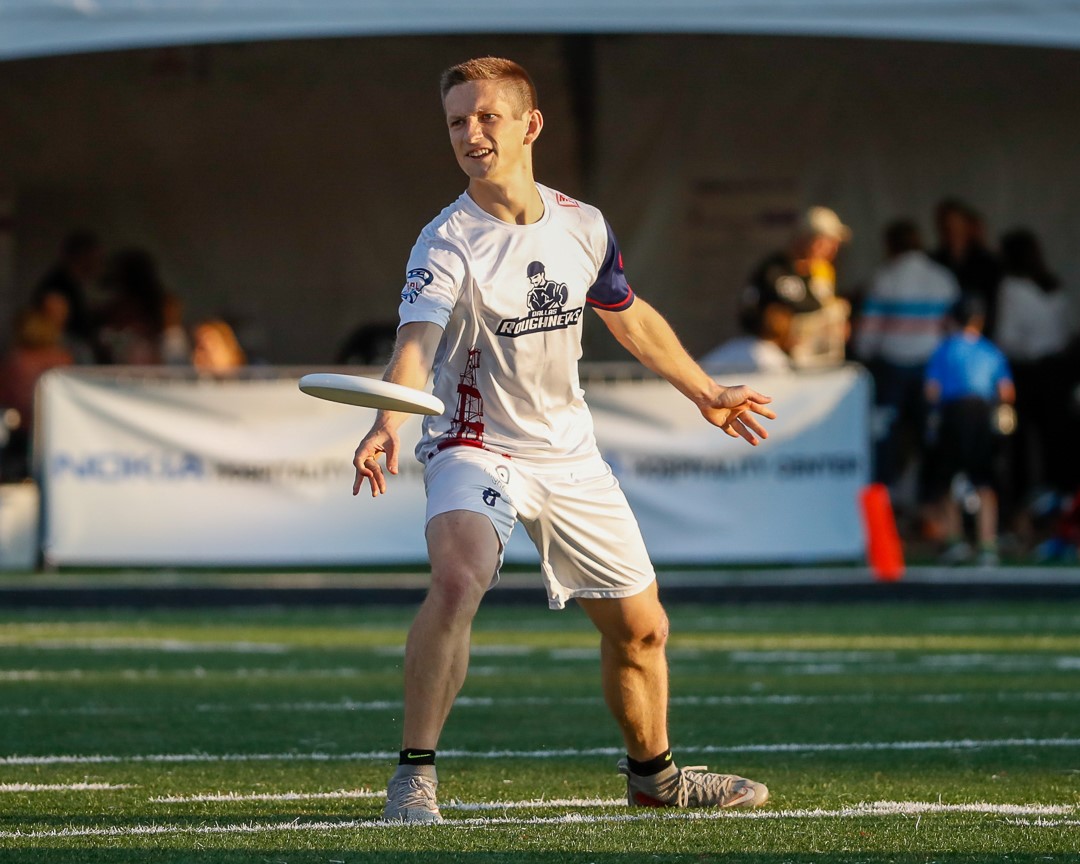 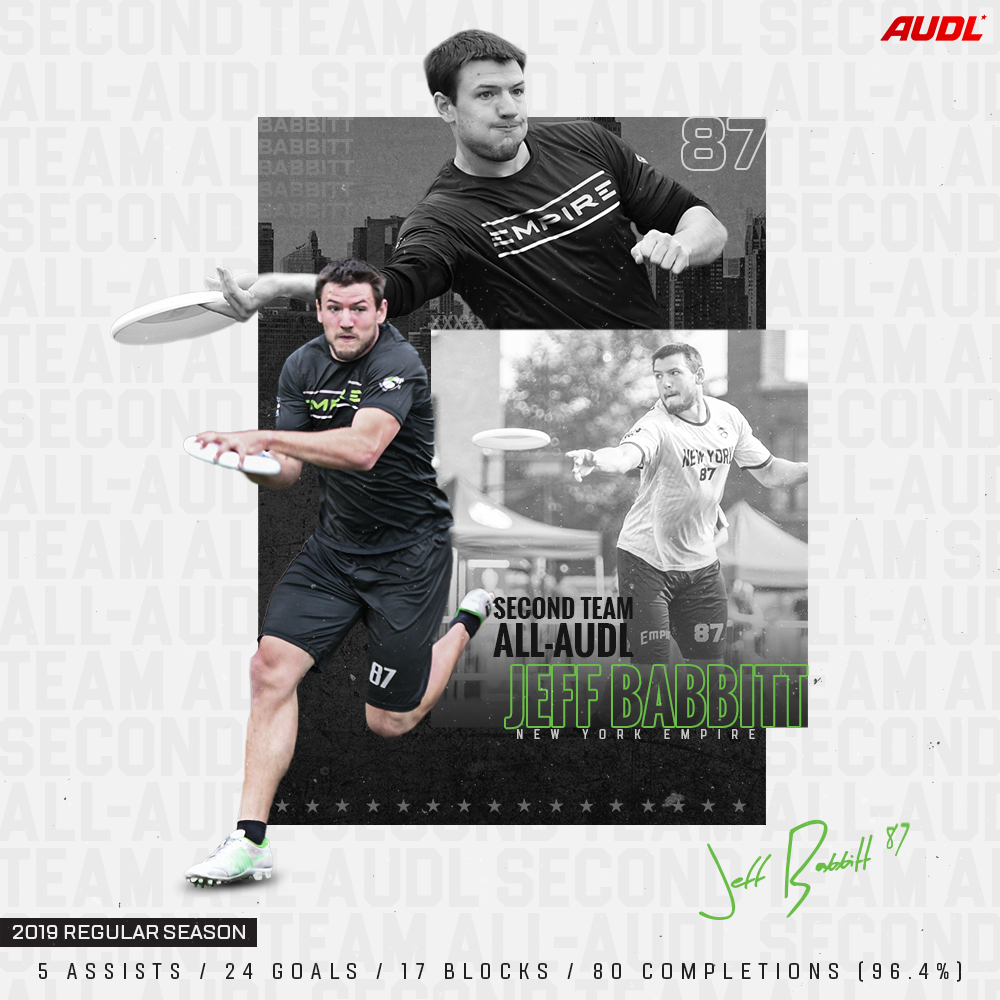 The leader of the New York Empire's vaunted defense, Jeff Babbitt was a menace for opposing offenses in 2019 both in coverage as a defender, and as a receiver on the counterattack. Babbitt's large frame and athleticism make him an impactful player whenever he's on the field—he was voted the best cutter and zone defender, as well as the best option at the buzzer in the East Division in 2019—as he averaged 2.33 goals per game and 1.47 blocks per game this season including the playoffs. Babbitt had eight games with two or more blocks; he scored at least one goal in each of his 15 appearances in 2019, and accumulated 10 multi-score games.

And while his consistency as a playmaker is undeniable, Babbitt makes his second All-AUDL squad in three seasons because of his ability to step up in big moments for the league champion Empire. He generated two acrobatic game-saving blocks in New York's Week 12 overtime classic against Raleigh to protect the team's undefeated record. In three postseason games in 2019 en route to a championship, Babbitt racked up 11 goals and five blocks without committing a single turnover. 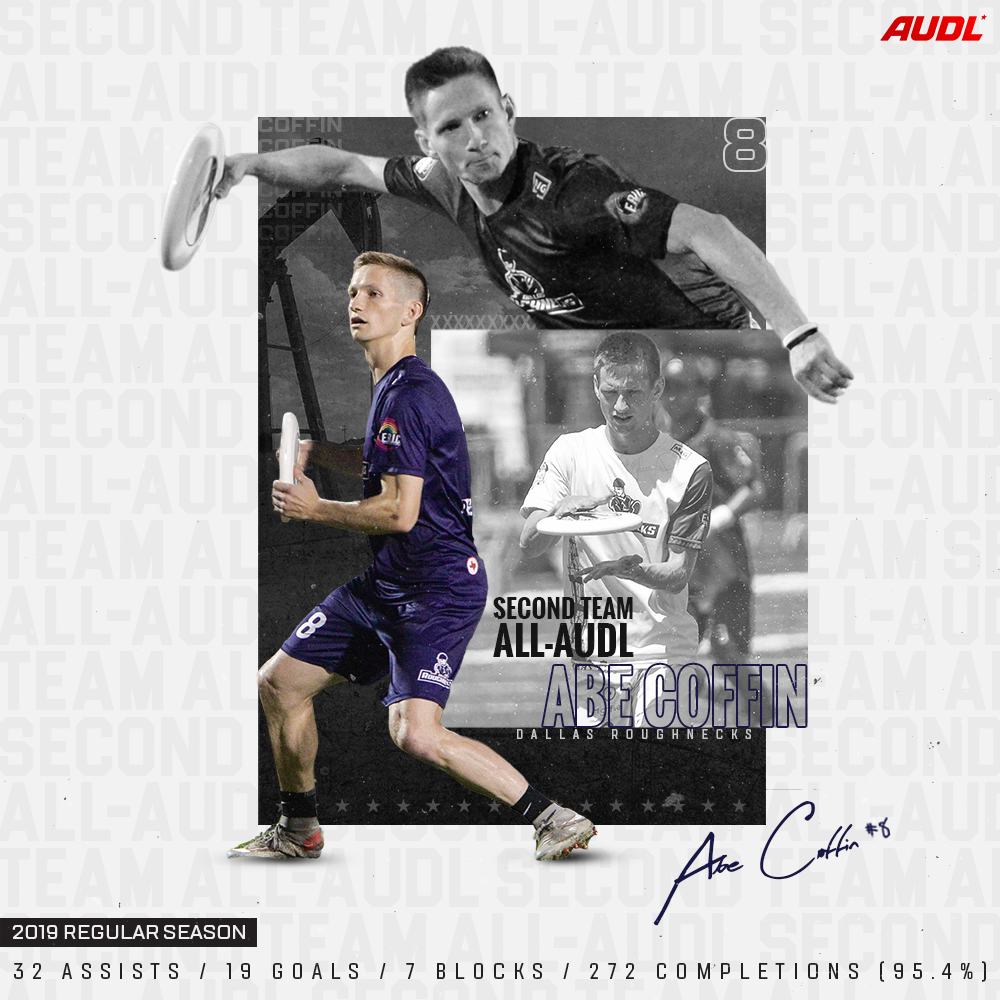 After missing the entirety of the 2018 season with an injury, Abe Coffin bounced back in 2019 to have his best season as a pro, leading the Dallas Roughnecks offense with his unique blend of quick movement, big throws, and sterling efficiency. A prime example of the old adage "you can't stop him, you can only hope to contain", Coffin was a weapon for the Roughnecks both with and without the disc, posting five different 2+ goal games and 11 games with multiple assists in 2019. Always able to stay in rhythm as a thrower, Coffin was awarded "best hucks" and "best backhand" in this year's tools survey.

Coffin often saved his best performances for the biggest matchups. He led all players during the 2019 postseason with 17 assists in three playoff games, including a nine-assist, 48-completion, zero turnover showcase in the 2019 South Division Championship Game; Coffin posted a 38-to-1 completion to throwaway ratio in the playoffs for a Dallas team that came four goals shy of their second title in four seasons. 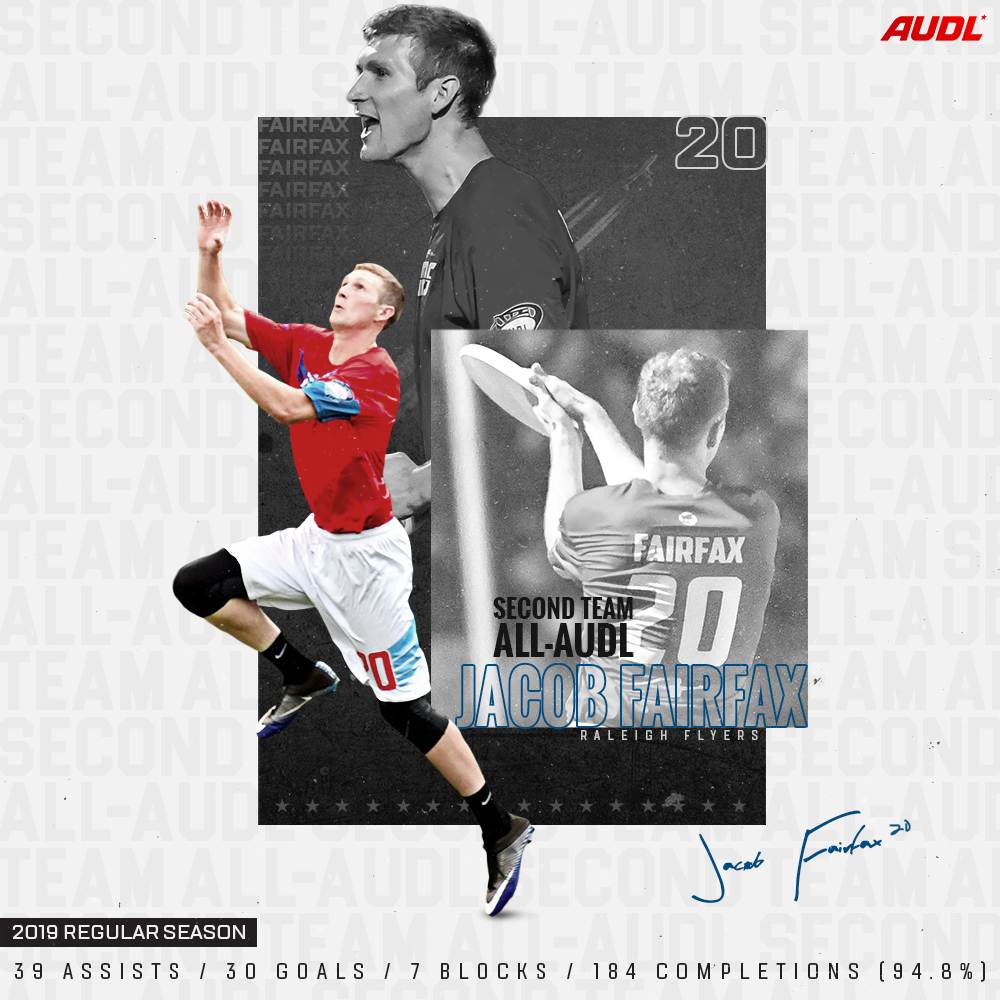 Entering the 2019 season, the Raleigh Flyers were pegged for a massive regression owing to their significant roster departures over the offseason, particularly on offense. But following two straight 40+ goal seasons in 2017 and 2018 as a primary receiver, Jacob Fairfax flourished in his new role as a potent distributor for the Flyers offense, throwing an assist on one out of every five completions he made in 2019, while still completing a robust 94.80 percent of his throws.

Fairfax finished the regular season on fire, throwing 3+ assists in each of his final seven games while adding 19 goals over the same stretch. At 23 with four years of pro experience, Fairfax is just beginning to tap his potential as one of the best downfield strikers in the game. 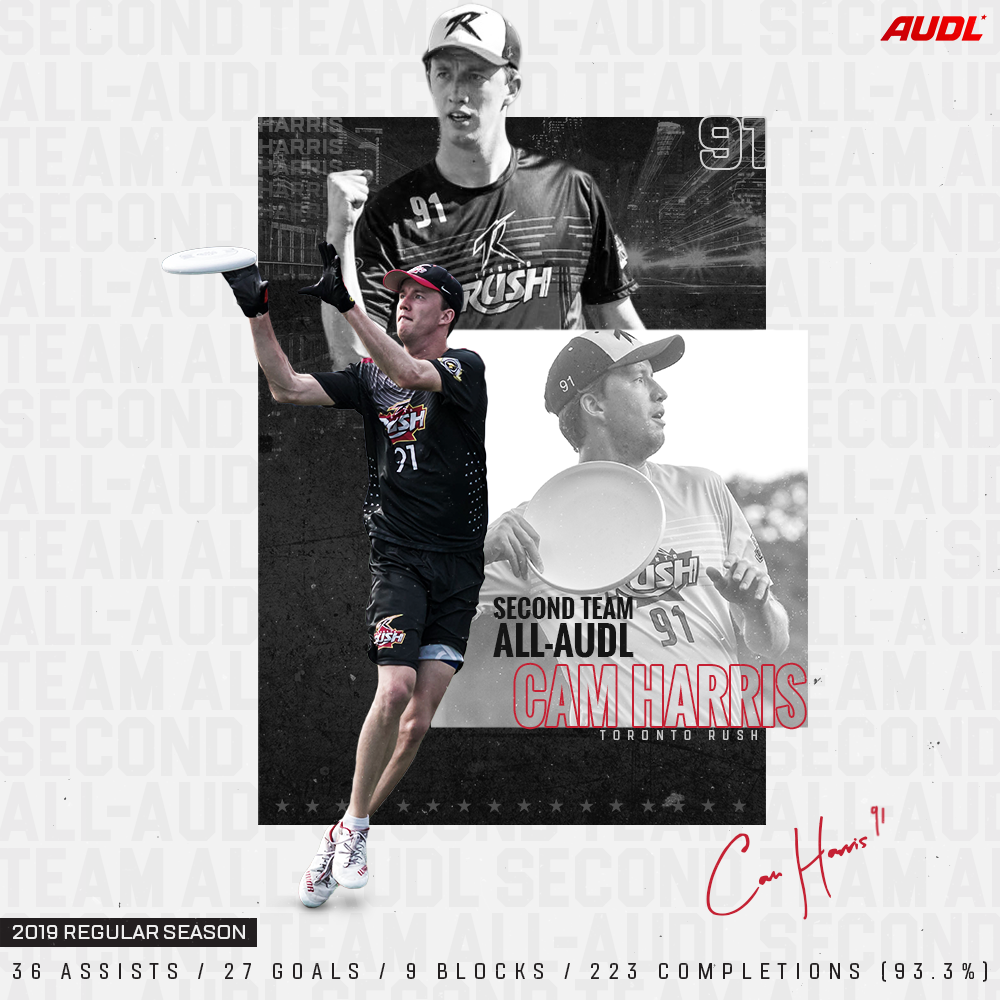 A seven year stalwart for the league's winningest franchise, Cam Harris put together his most complete campaign as a pro in 2019 for the Toronto Rush. Harris led the Rush in assists, goals, and points played in 2019, embodying his leadership role in the truest sense for a Toronto team that made the playoffs for a league-record seventh straight year. Among a handful of such moments throughout the season, Harris' game-winning score in Week 6 proved to be instrumental in team's playoff push.

Despite being one of the most established playmakers in the league, Harris is still improving, posting his most efficient season as a thrower in 2019: He finished the regular season with 22 assists on 98-of-103 throws in his final five games. 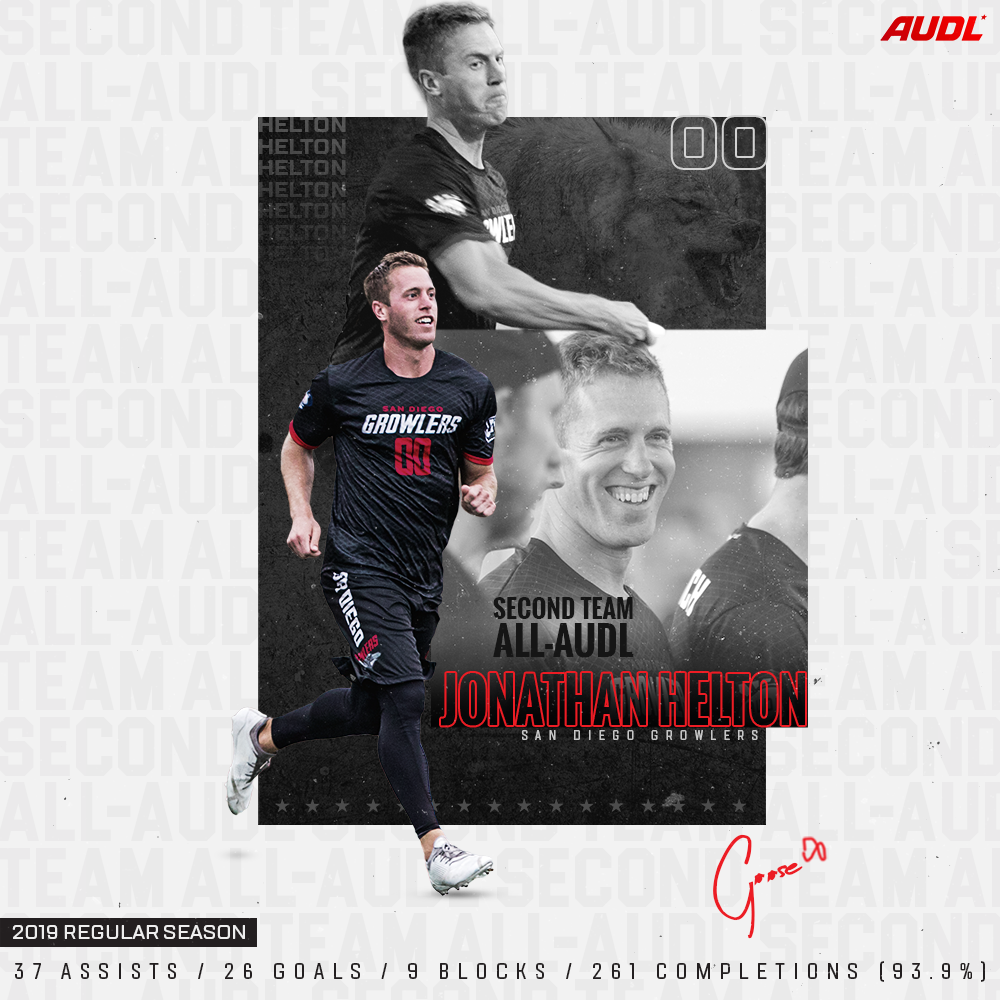 Playing on his fourth team in five seasons, Jonathan "Goose" Helton enjoyed his best season as a pro since his back-to-back AUDL MVP campaigns in 2012 and 2013. At 35 years old, Helton averaged the 10th most points per game (26.83) in the league in 2019, while contributing 2.25 goals and 3.67 assists per game. And in his first year with the San Diego Growlers, Helton was an essential part of the team making their first Championship Weekend appearance in franchise history.

More than his raw production, though, Helton helped unlock San Diego's offensive potential with his aggressive downfield looks and flair as a thrower. His 261 completions during the regular seeason were his most since 2013, and his 93.90 percent completion percentage was a career high. Helton also added 39 "hockey assists" this season. 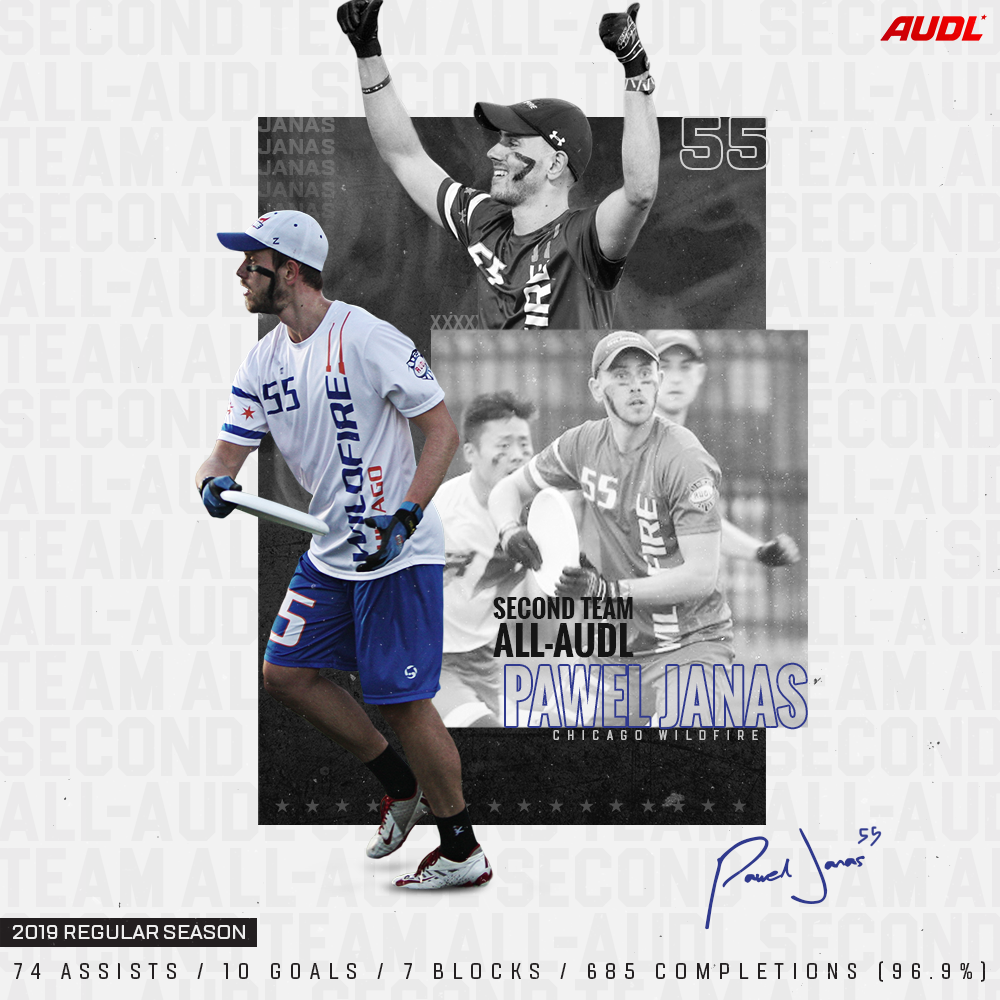 Since joining the AUDL in 2017, Pawel Janas has been the most prolific passer in the league. 2019 marks his third straight season leading the league in assists and completions, as well as Janas' third straight All-AUDL selection. The 25-year-old Chicago Wildfire handler now has 256 assists and 2,436 completions (95.10 percent completion rate) in 40 regular season games for his career, and has yet to miss a start as a pro.

In 2019, Janas captained the Wildfire to their first postseason appearance in four years. He was second in the AUDL in assists per game (5.92) and third in completions per game (54.92). Janas also tied for a 2019 single-game high of 12 assists against Minnesota on June 1. 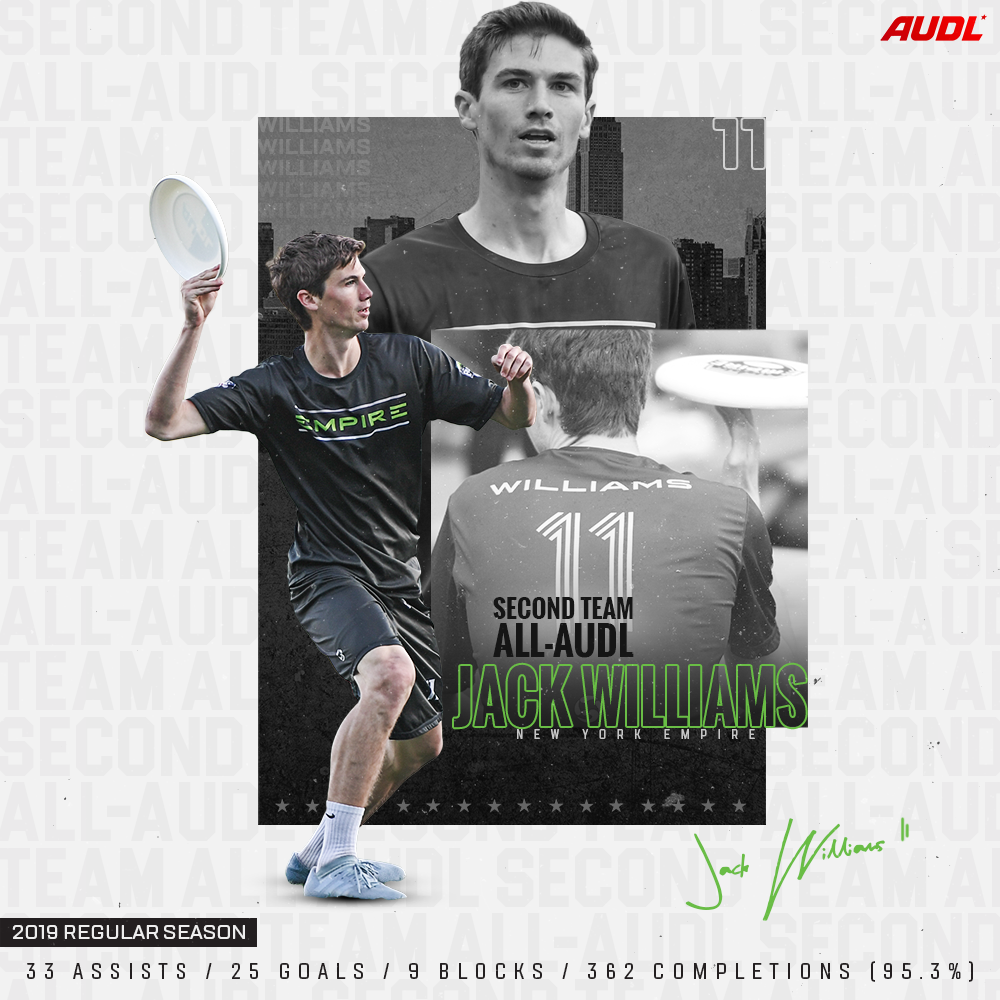 Jack Williams lived up to the hype in his first season with the New York Empire, helping deliver a championship trophy while playing the second most points in the league in 2019. New York finished with a top five offense, and Williams' ability to both initiate the offense and convert drives into scores was at the center of much the Empire's production. Williams' consistency as a striker is almost unparalleled, as he averaged 1.93 goals and 3.07 assists per game in 2019, and never had fewer than three scores (assists plus goals) in his 15 appearances this year.

During the Empire's championship playoff run, Williams refined his play even further, completing 10 assists on 80-of-81 throws in three games against three of the best defenses in the league in Toronto, Indianapolis, and Dallas.