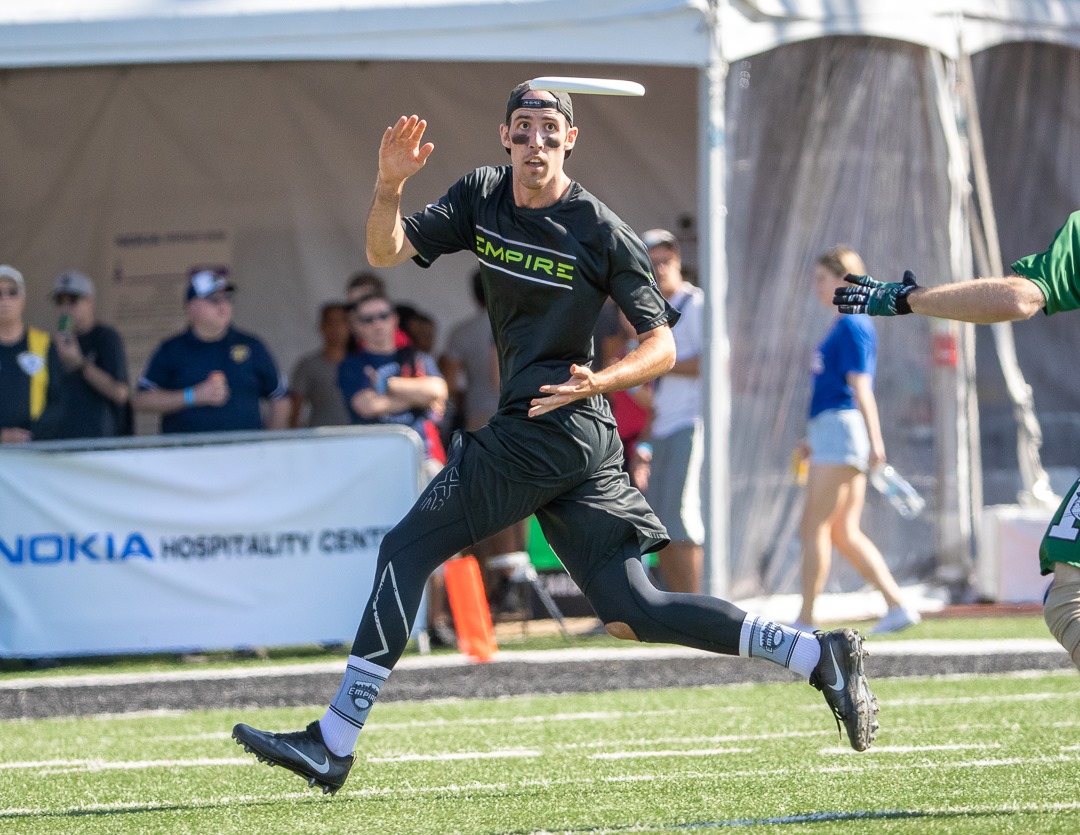 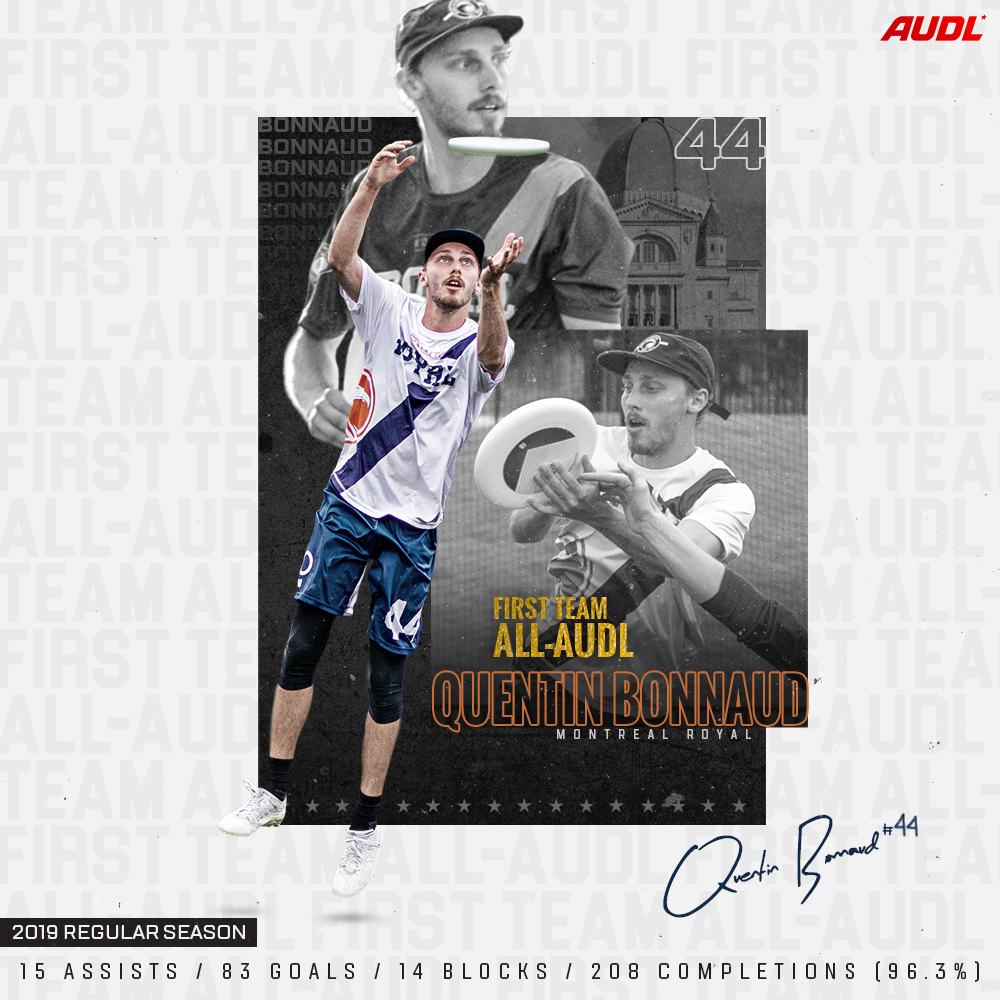 In 2019, Quentin Bonnaud was the most dangerous goal scorer the league has ever seen. He set a new record for goals per game in a single season, averaging 6.9 per contest, breaking Mischa Freystaetter's 6.8 goals-per-game mark from 2016. Bonnaud's league-leading 83 goals is also the fourth highest single season total in AUDL history, despite the league schedule shortening from 14 games to 12 in 2019.

Even when opponents knew Montreal Royal wanted to get Bonnaud the disc, there was little they could do to stop the 5'9" roadrunner from reaching the endzone. In Bonnaud's final four games of 2019, he tallied a ridiculous 34 goals, including 11-goal and 10-goal single game performances. He was also super efficient as a thrower, dishing 15 assists on 208-of-216 throws. 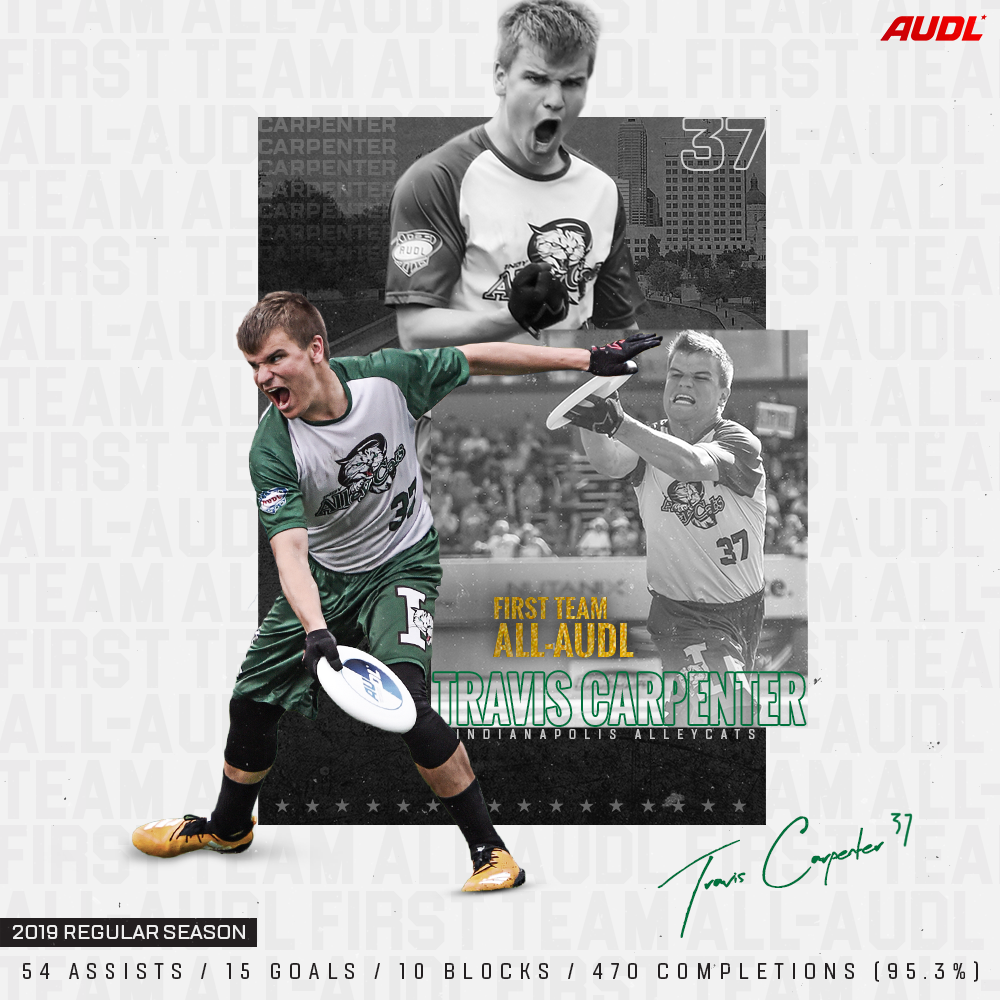 One of just six players to play in every season since the league's founding in 2012, Travis Carpenter is making his first All-AUDL team in his eighth season with the Indianapolis AlleyCats. The 26-year-old did a little bit of everything for the 'Cats in 2019, helping the team clinch their first division title since 2012 by emerging as one of the premier distributors in the AUDL; Carpenter put up a career-high 61 assists in 2019, sixth most in the league.

But even more than the raw production numbers, Carpenter elevated his play dramatically in the clutch. He delivered the game-clinching block in Indy's first-ever win in Madison. He sprung free for a momentum shifting layout goal in the Midwest championship game. Carpenter consistently produced whenever the 'Cats turned to him. 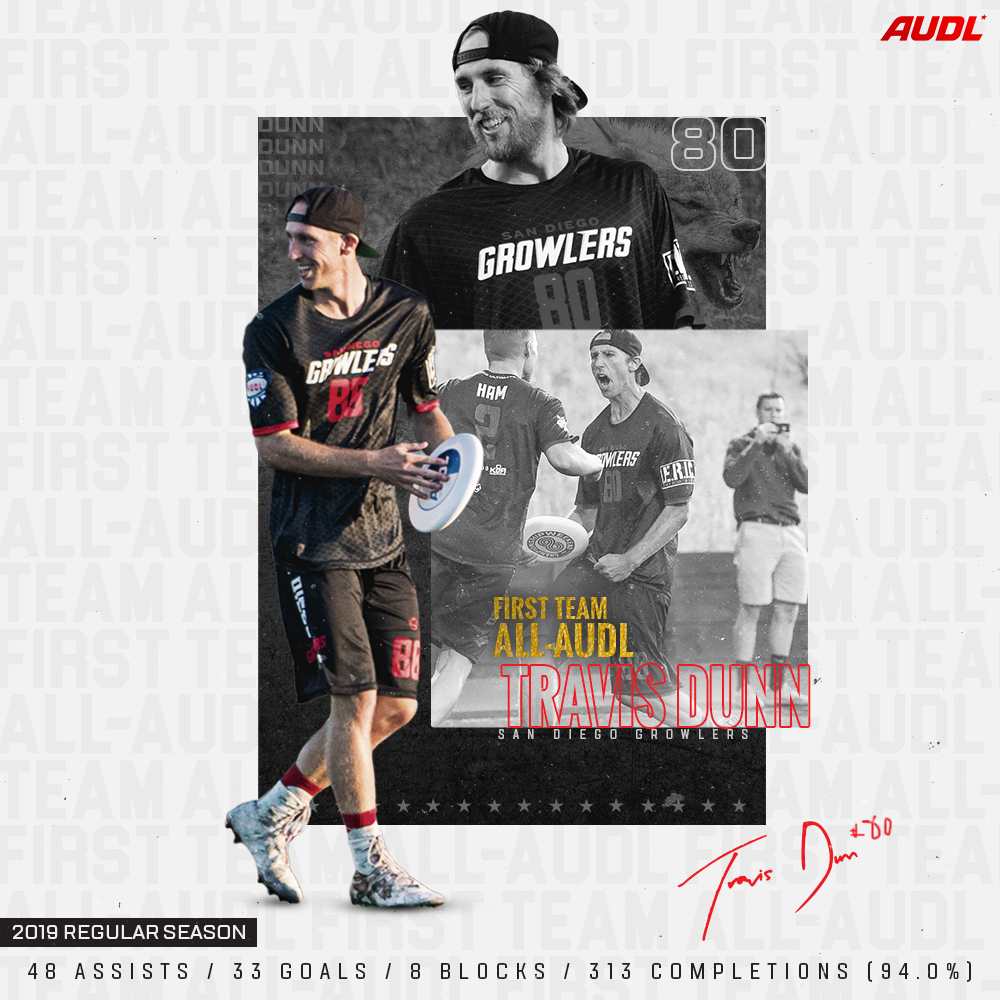 The San Diego Growlers finished 2019 with the second highest scoring offense and the second most efficient offense in the league, and the lion's share of credit goes to Travis Dunn. Making his second consecutive All-AUDL selection, Dunn is perhaps the most consistent offensive performer in the league. This year, Dunn had no games with fewer than three assists, and just two outings without scoring multiple goals.

The five-year Growlers veteran is comfortable both in the backfield as a handler, and downfield as a big play receiver. And he's shown a knack for big outings against good competition; dating back to last season, Dunn has 13 assists, 11 goals, and just three turnovers in three playoff appearances. 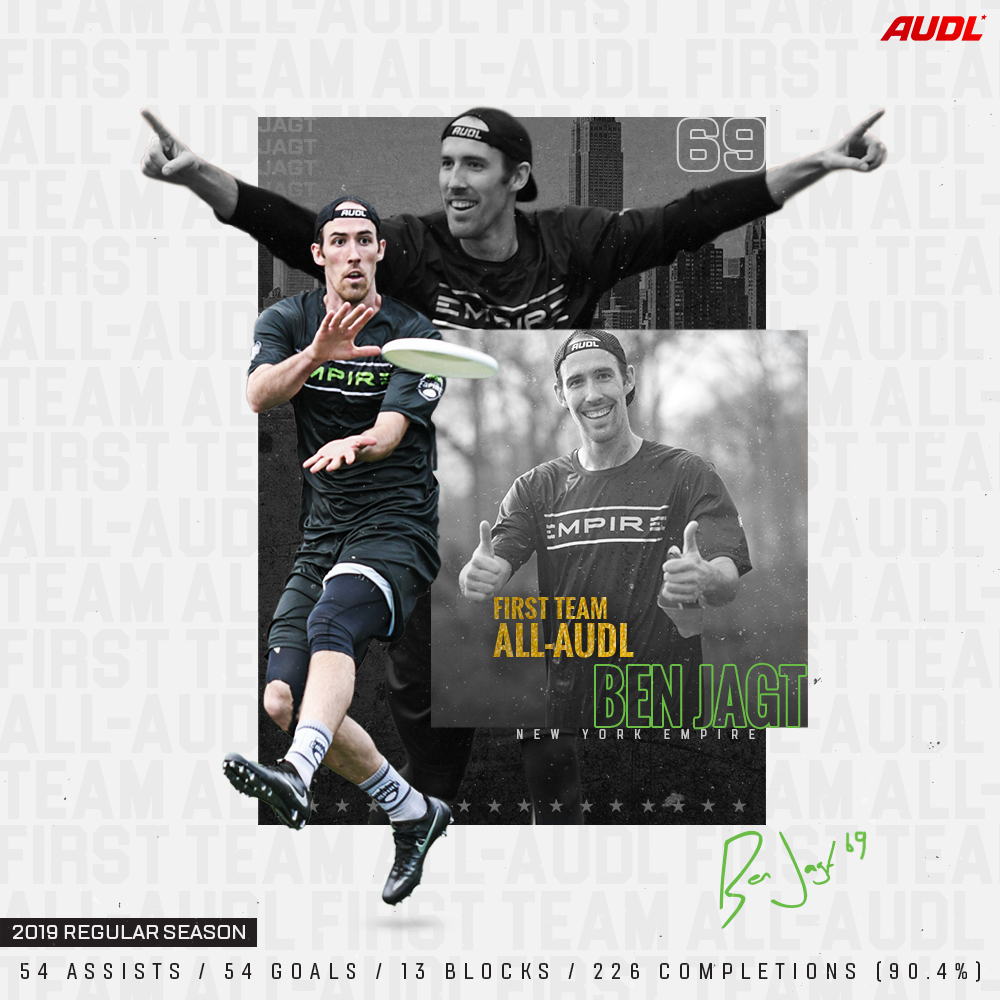 The most unstoppable force on offense in the league, Ben Jagt had his best year in 2019, becoming one of just five players in league history to notch a 50-assist, 50-goal season. Jagt has married his size, athleticism, and skill into an unholy combination for defenders to deal with, able to operate as both New York's best receiver and best thrower, sometimes all in the same point.

Jagt was especially impressive in primetime in 2019. He had a nine-assist, eight-goal performance against DC in a critical double overtime win in May. He was equally potent against Raleigh in another double overtime thriller in June, posting nine assists and six goals in the Empire win. And finally and most importantly, he submitted a five-assist, six-goal, zero turnover spectacle in the 2019 AUDL Championship Game. 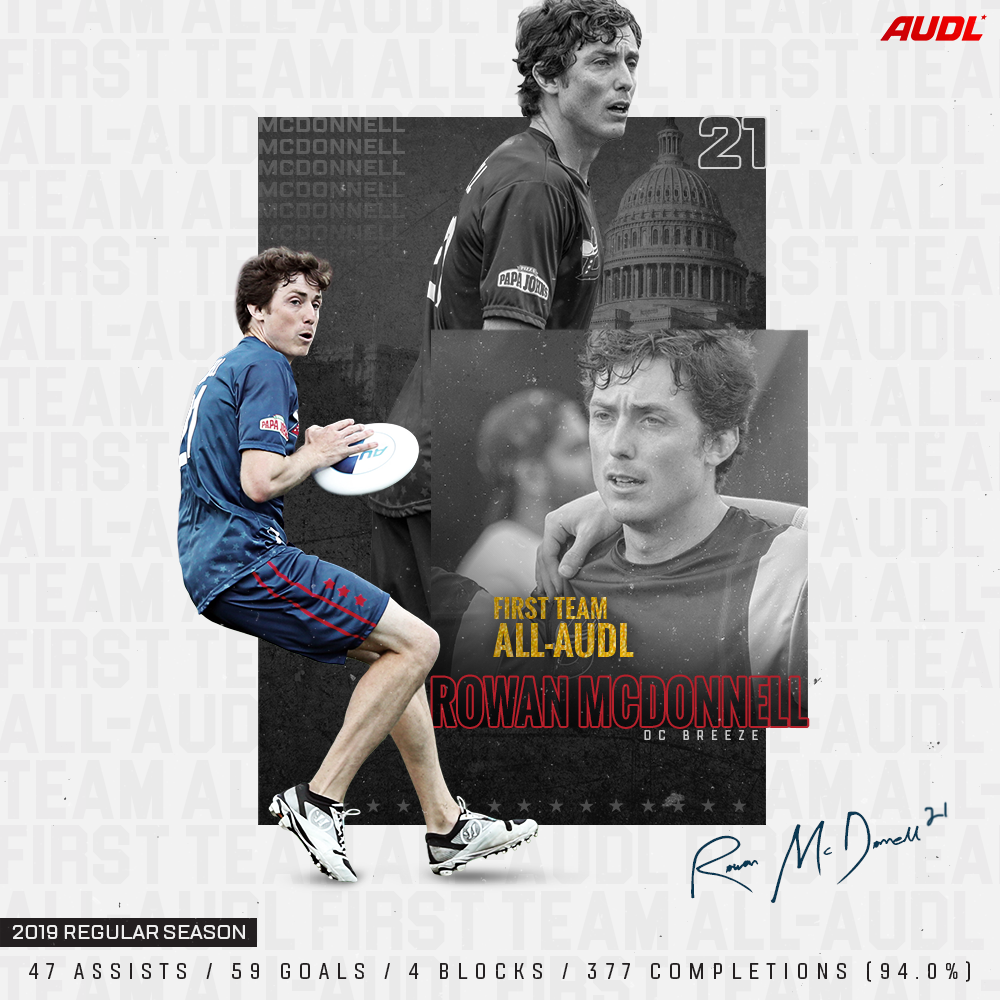 MVP a season ago, Rowan McDonnell had an arguably even better individual season in 2019. He finished tied for second in the AUDL in goals scored, 11th in assists, and was fifth in points played per game with nearly 28 per game. The DC Breeze endured a lot of roster turnover from 2018 to 2019, and McDonnell only seemed to improve.

McDonnell's statistical production was both consistent and explosive. He had five games with 10+ scores (assists plus goals) in 2019, and never scored fewer than three goals in a given contest throughout the season. Even in the Breeze's playoff loss, McDonnell contributed on 17 of the team's 21 scores. 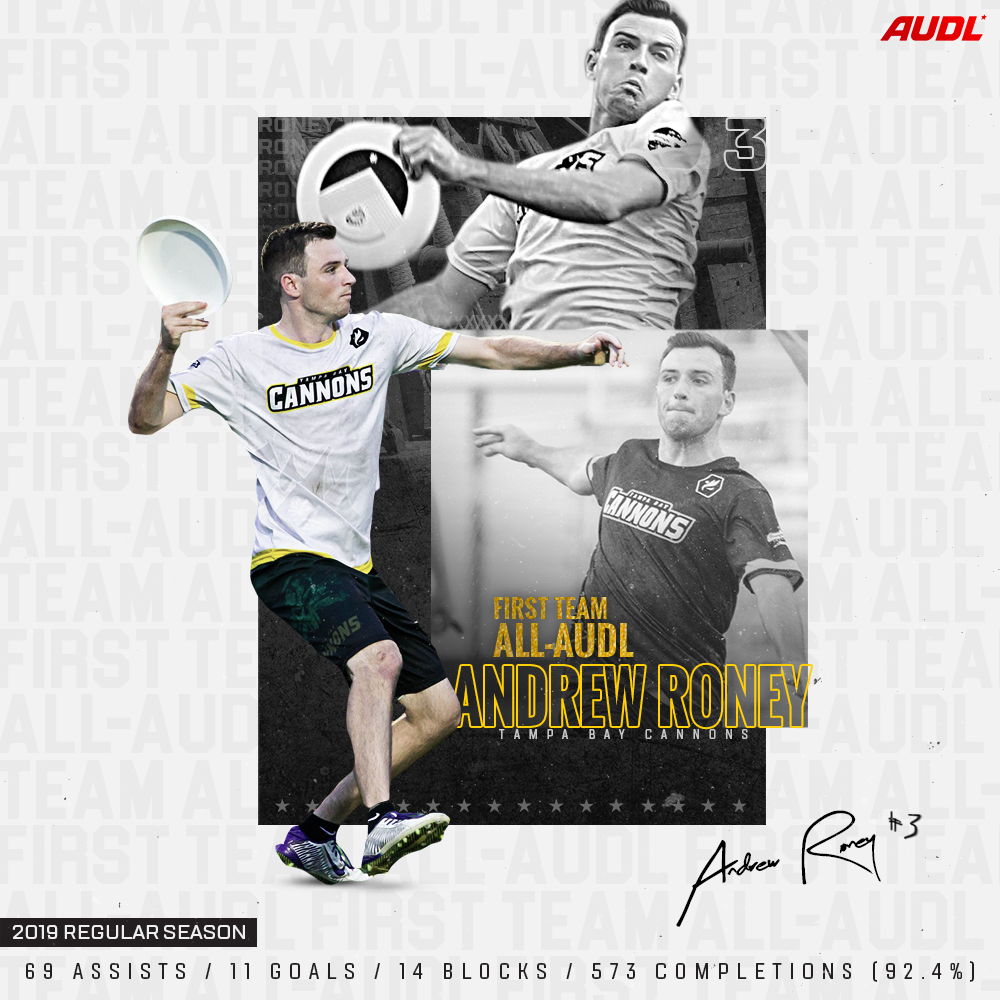 No team relied more heavily on a single player than the Tampa Bay Cannons did on Andrew Roney in 2019. And despite losing his two top receiving targets from 2018, Roney went on to have a career year, finishing second in the league in assists; Roney was first in assists per game at 6.27.

Roney was voted best in the South Division in multiple throwing categories, highlighting his dynamic ability with the disc. 2019 also marks the third straight season he has finished with 50+ assists and 400+ completions. 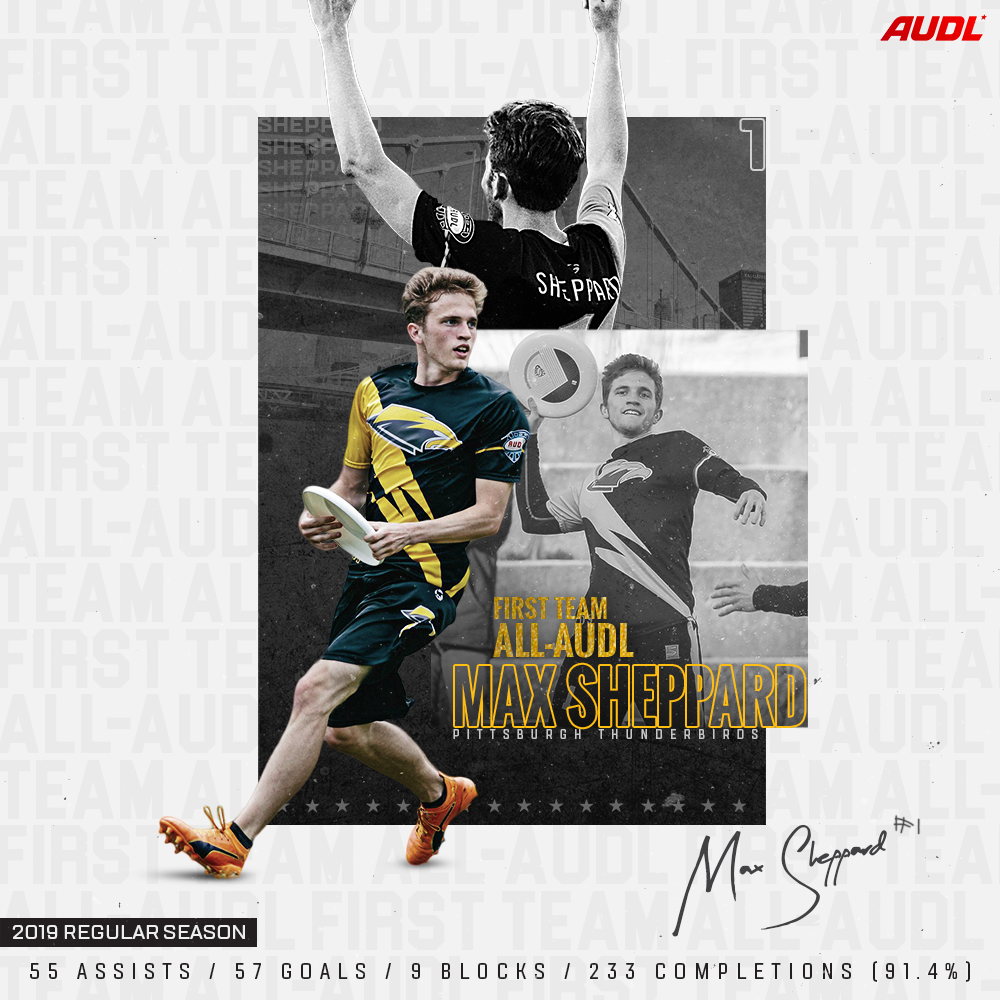 Alongside Jagt, Max Sheppard joined the uber exclusive 50/50 club in 2019 thanks to an incredible second half of the season for the rejuvenated Pittsburgh Thunderbirds. In his final eight games of the season, including the playoffs, Sheppard threw 50 assists and caught 39 goals as the 'Birds went 6-2. With the best hammer and speed in the division, Sheppard dominated any opposing defense over the last few months of the season.

Sheppard's season on offense was one of the best in league history. He assisted or scored a goal on a whopping 43 percent of Pittsburgh's scores in 2019. In the game that effectively clinched the Thunderbirds' playoff berth, Sheppard played the final 17 points of a double overtime comeback road win against Detroit, contributing eight scores, including the game winner in sudden death.