The AUDL cares about its players and their safety. Over the last three seasons the league has coordinated its teams to participate in a University of Alabama at Birmingham Orthopedics surveillance study* led by Matthew Hess, MD, a former UGA ultimate player. Participating teams have been logging player injury data on a weekly basis for statistical analysis. Below are the results from the 2018 season report. The 2017 season data will be published in the Journal of Athletic Training.

The study has grown each of its three seasons, leading to an increase in data collected. The 2018 season saw a growth in team participation, pre-season data collected, and games recorded. Injury rates have remained stable over that time frame increasing confidence in observed trends. Injury rates in the AUDL are comparable to similar NCAA-level sports

The industry standard unit of measure is the Athlete Exposure, defined as one player participating in one game. This method does not factor in points played per game. The 2019 season study will attempt to connect player data to injury data for the first time ever. We hope to be able to analyze many metrics made available by the AUDL’s ultianalytics data set

An injury is described as a physical harm that causes a player to miss part of a game or practice, ie an injury substitution during a point or a player not being able to play any number of subsequent points in the game.

Players are 3.5x more likely to be injured in a game than in practice. This is likely attributed to the differences in intensity of play and the percentage of practice that is scrimmaging versus drills and conditioning. Scrimmaging is by far the most common occurrence of injuries at practice.

Players were more likely to be injured as a game progresses with the majority of injuries occurring in the 3rd quarter. 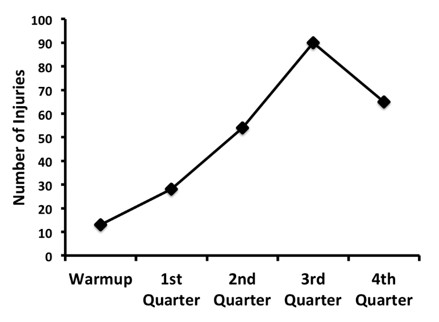 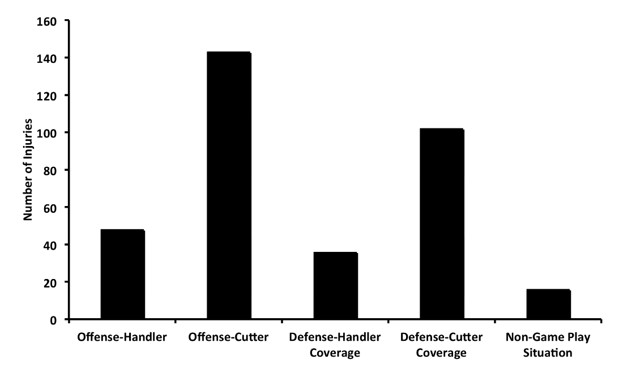 Data from several AUDL- affiliated women’s and mixed teams was tracked in 2018.

One way that a study like this provides value is to inform the league, coaches, players, and medical staff so that the best decisions can be made. Each year of subsequent data collection increases the validity and reliability of trends. The research team has collectively decided on several recommendations to potentially improve athlete safety.

Injuries to the ankle and lower leg are very common with ankle ligament sprains a significant source of athlete playing time loss. Data from other sports indicates that wearing under-the-shoe soft ankle braces can reduce non-contract sprains.  Athletes should consider wearing bilateral ankle braces (or an alternative equivalent, such as Lasso compression sock) in all practices and be strongly encouraged to wear them during competition.

Teams should employ a mandatory, organized team warm-up focusing on the bilateral lower extremities after any halftime. This warm up can be shorter than your pre-game routine.

When substituting athletes, coaches should be aware of the increased injury rate as you get deeper into the game. It can be attractive to tighten playing rotation as the game nears its end. Be mindful of the increased risk of injury and managing your players health for the entire season.

When planning practice time, coaches should be aware of the increased risk of injury with scrimmaging compared to other forms of practice. At this time and with our dataset, we are unable to recommend an optimal safe amount of scrimmaging. Practice times vary too substantially across AUDL teams, club teams, college and youth.

Special thanks to our Study Team:

Please contact us at audlisp@gmail.com with any questions or comments