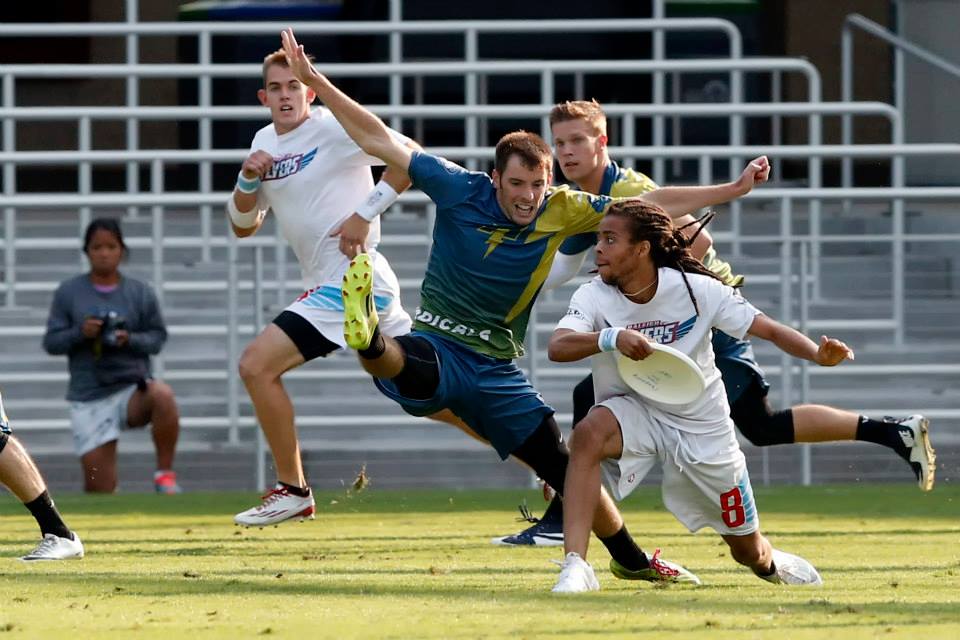 WATCH: Game of the Week

This week’s contest between the Madison Radicals (6-0) and Raleigh Flyers (5-3) is the regular season contest for which I have been most excited all year. Madison’s status alongside Toronto as one of the two remaining undefeated teams is unsurprising, but Raleigh already tallying three losses in 2018 is a shock.

Flyers Head Coach Mike DeNardis told me before the season that he wanted as hard a regular season as possible so that his team would have already been through the fire come playoff time. Even though his team has losses to its name, DeNardis is sticking to his guns, happy that his team has this strong of a schedule.

“It's everything you really want out of testing your mettle. We certainly have done that,” DeNardis said.

Madison versus Raleigh has the potential to be a preview of the 2018 championship game. Therefore, I’m dedicating the entire column this week to only one game.

Pace will be the deciding factor in the game. If the game is oppressive and slow, Madison has the upper hand. If the game is uptempo, expect Raleigh to have the advantage.

“That's certainly a big element of success in this game,” DeNardis said. “We like to play fast, and move the disc, and challenge, and put defenses and offenses on their toes, and that's what we would like to do.”

Even though the playmaking edge probably falls in favor of Raleigh, Madison has the most tools to control the pace of the game. Switching between person and zone defenses keeps opposing offenses guessing, and the Madison zone defense can force fifty throws or more in a single possession, tiring and lulling the offense into a kind of dead space. Beyond those instances, Madison’s athletes on defense will tire opponents in their one-vs-one coverage defense, as well. When Madison switches to zone, its opponents’ legs are supposed to already be tired, which forces them into mistakes during the long and monotonous battles.

Madison’s offense generally mimics the same patient-but-relentless rhythm of its defense. But what should happen if Raleigh’s offense comes out the gates firing and scores quickly? If Nethercutt and Jack Williams can find a rhythm with Jacob Fairfax and Mischa Freystaetter cutting deep early, it will be intriguing to see how Madison’s slow and methodical offense will respond.

“It's certainly gonna be a different experience for them, more than us,” said DeNardis. “I think we can play slow, but the question is, can they play fast? If we go through runs, can they withstand them?”

Madison has a strategy that can work to keep the offense in control.

“We've been kind of breaking it down on the sideline after every point, even if the point goes well, even if there's nothing really to discuss, we've made a habit to check in with each other to get the next play set up,” said Radicals offensive cutter Pat Shriwise. “That has, in a strange way, disconnected us from what's going on during the D points.”

Madison’s offense makes a point of using its time off the field to actively deliberate about their strategies during the game, and make adjustments on the fly. In the same way that a drummer will report on pace and timing in between studio takes, veterans like Shriwise and Andrew Brown will keep the offense level in between points.

Raleigh wants to learn from the mistakes of previous Radicals opponents. Though patience is commonly preached as the antidote to a zone defense, Raleigh is going to utilize speed—Raleigh knows it’s important not to be lulled against Madison. Last weekend, Chicago seemed hesitant playing against Madison, and they were reluctant to take shots downfield. Gibson and Pawel Janas passed up open deep looks multiple times, only to dink and dunk with reset passes before a seemingly inevitable turnover.

“I think that's a product of [Madison’s] system, and yeah, there definitely can be an over-patience in [opponents],” admitted DeNardis. “You do have to take those looks when you have them and not hesitate.”

DeNardis is confident his veterans won’t fall into Madison’s traps.

Both Madison and Raleigh will be with almost full rosters, so this game will have a playoff game level of intensity. Expect both teams to play tighter rotations.

Madison will be without Kevin Brown, but with Tom Annen carrying the primary throwing duties alongside Ben Nelson and Andrew Brown for the Radicals offense, Madison will be in good hands. Shriwise and Dave Wiseman will provide initiation cuts and connecting throws, while Tarik Akyuz and Colin Camp will prowl the endzone for the Radicals. I expect those seven players to start on Madison’s offense, while Ryan Tucker and Thomas Coolidge should get good minutes as well.

Though Andrew Brown and Annen are best known for their silky throws, every Radical offensive player has a diverse game. Camp, Wiseman, and Nelson are impressive huckers in their own right. Nelson offers incredible touch on his deep shots, while Wiseman uses his 6’5” frame to step out and launch monster backhands downfield.

Akyuz may be a new player in Madison, but he’s provided a new level of dynamism to Madison’s offense, both because of his athleticism as well as his freshness to the team. Shriwise actually credits Madison’s offensive diversity this year to the newcomer.

“[On top of athleticism], the other thing he brings is kind of a naiveté to his ability on the field,” said Shriwise. “I think that a lot of us on the O-Line knows what each other likes to do. Tarik comes out, he's like, I'm new here, but I love playing Frisbee, I'm athletic, and I'm gonna do it all. That has been really good for us to kind of shake things up, to have people say, I'm good at this, but that doesn't mean I can't do other things, and I need to be a little bit more diverse on the field.”

However, Madison’s offense has not yet faced a defense as star-studded as Raleigh’s. Chicago offered a facsimile last week, when it ran offensive stars Janas, Ross Barker, and Michael Pardo onto the D-Line to start the game. Perhaps shaken by the stars opposite them, according to Shriwise, the Radicals offense were immediately broken after a failed centering pass.

Raleigh has the cast to play a defensive line with all-world talent throughout the entire game, instead of for just one point. DeNardis is known to mix things up by playing stars like Nethercutt, Shane Sisco, or even Freystaetter on the D-Line, and he can counter Madison’s monstrous offense – with practically every player standing between 6’1” and 6’5” – by matching size or by scheming Madison’s height into a disadvantage.

Raleigh’s defense is a shape-shifting monster, capable of forming into seemingly anything to surprise its opponents. Though they will be without important defender Charlie Muniz, all of their first-line defensive options will be available.

Even if DeNardis doesn’t use any trickery by adding a player like Nethercutt to his defense, it’s impossible to predict how the lines will read come gametime. Noah Saul has been perhaps the only consistent player on every Flyers defensive point, and they use a variety of athletes on any given day. Justin Allen, Hunter Taylor, Matt Bode, and David Richardson have frequently played on Raleigh’s first defensive line, and DeNardis has options to complement them. Mike Pannone, Matt Ellis, and Josh Hartzog are all defensive athletes who stand at 6’1” and would be more than capable defending Madison’s offensive cutters.

No matter the specific personnel choices, Raleigh will use a physical person defense to stifle Madison. That should be a good choice, as the Radicals offense is incredibly comfortable beating a zone defense or junky sets in practice. Madison has been practicing patient endzone offense by playing in the red zone against eight or nine defenders. Expect to see Madison dump-swing the disc for days at a time when near the endzone until a crack opens in Raleigh’s defense.

The marquee matchup will of course be Raleigh’s high-flying offense against Madison’s zone defense. Both will have nearly complete personnel available. I expect Raleigh will start with Nethercutt, Bob Liu, and Brett Matzuka handling, with Williams, Fairfax, Terrence Mitchell, and Freystaetter cutting. Jonathan Helton and David Snoke will be Raleigh’s only key offensive rotation pieces missing.

Madison’s zone will offer Peter Graffy defending deep, Pettit-Scantling, Sterling Knoche, Seth Meyer, and Logan Pruess across the middle, and Andrew Meshnick with Matt Weber defending in the cup. Nate Bosscher – and his cannon arm – will fill in minutes defending the middle as well. Josh Wilson and Vic Luo will be Madison’s only missing defensive pieces.

This game has a different level of importance for its participants. Madison has never missed championship weekend, and divisional opponents do not look likely to topple the Radicals in 2018. Win or lose to Raleigh, Madison stays a favourite in the hunt for an AUDL championship. Of course, they are 1-6 against non-divisional opponents all-time, with that one win coming against Raleigh in 2015. Madison doesn’t need to start defeating divisional opponents until the playoffs, but a win this Saturday would answer any questions about Madison’s ability to hang with teams outside the Midwest.

At 5-3 on the season, a first-round playoff bye is looking less and less likely for the Raleigh Flyers. The issue with a difficult regular season is that the Flyers have outstanding divisional opponents in Dallas and Austin, who will assuredly finish with 8-10 wins on the season. If Raleigh falls to Madison, they still have an Austin game on the schedule, with no chance to play Dallas and put another loss on the Roughneck’s record. In this scenario, Dallas would be likely to win the divisional crowd, while Raleigh would have to beat Austin and then Dallas in consecutive playoff games to reach championship weekend. That would not be a given; Raleigh has more on the line than Madison.

Both teams are thrilled for this game, which represents both a team measuring stick and an opportunity for players to play on the AUDL’s largest regular season stage. Both teams zealously respect the other. With college nationals taking place only down the road in Milwaukee, Wisconsin will be the hottest spot in the ultimate world this weekend.