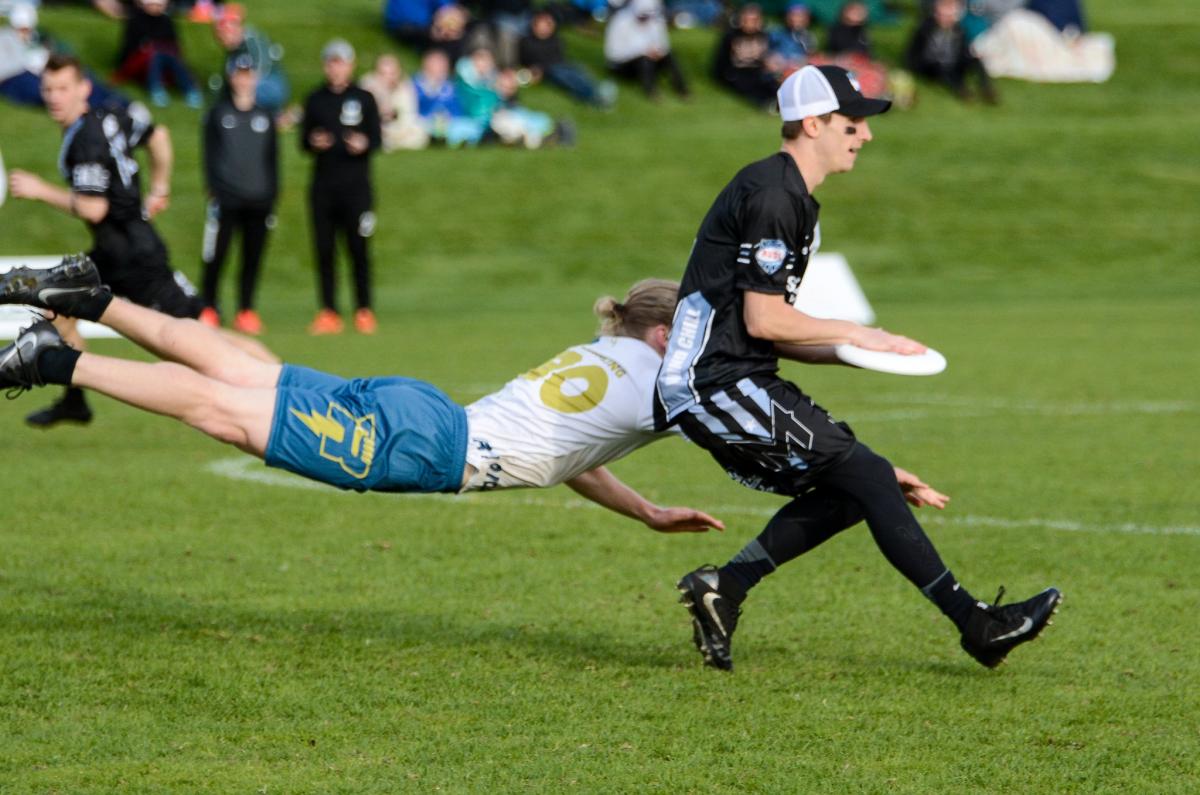 The Minnesota Wind Chill will be the Madison Radicals' first tough test of the young 2018 season. Madison has put the wood on all opponents so far in 2018. They’ve scored an average of 25.33 points to their opponents’ league-low 12.67 goals against. They have never trailed during their race to a 3-0 record. Regardless, Kevin Pettit-Scantling isn’t impressed with the team’s performance so far, remarking that they’re only performing up to expectation.

The team has unexpectedly been receiving contributions from newer faces than is traditional for Madison, which has marched practically the same lines into battle every year since its inception.

“I'd say that the rookies are all pulling their weight, but a lot of what we're seeing this year is the support players from previous years taking bigger roles,” said Pettit-Scantling. “Just in general, when we can have 15-18 support players playing like all-stars, I think you're gonna have a good season.”

Pettit-Scantling thinks the defense goes deeper than in years past, and sees himself and teammates stepping up into their roles with more determination.

“In particular, Logan Pruess is playing really well. We ask a lot of him[...] He plays person-to-person defense, and he plays zone. Vic Luo is someone that we've come to really trust to get throws to places in tight corners.”

In general, these are guys who have played for Madison before, but have shouldered new responsibilities in 2018. Madison luxuriates in depth even without 2017 standout, Ross Barker, who has been playing like an early season star in Chicago.

“I'm not scared because he's an opponent, and I refuse to admit that type of fear, but he's a good player,” said Pettit-Scantling. “I'm telling you. He is so good. I called him the day he decided to play for Chicago, and part of our conversation was that we were winning this year, and it's too bad he can't win with us.”

Minnesota, on the other hand, lost important defensive pieces in Brian Schoenrock and Jay Drescher. “Anytime you're losing two players of that caliber,” said Greg Cousins, “you have to sit down and reevaluate.”

Minnesota is switching several of its stars onto the D-Line to keep their potency no matter which line is playing. An offense has diminishing returns, and players like Josh Klane and Ryan Osgar will helm an efficient offense no matter who surrounds them. Cousins will play most of the season on defense, as will new addition Jordan Taylor.

“He's just kind of a do-it-all [player],” explained Cousins. “He is an incredibly talented offensive player who also plays some of the best defense on our team, so it gives us that luxury of being able to have a great D player who can also on a turn go and work offensively.”

Osgar might prove to be the hinge on which the fates of the game turn. Second team All-AUDL last year, Osgar’s skill from the initiation cutting position helped Minnesota remain the last unbeaten team in 2017. Madison, however, was relatively effective in taking Osgar out of the game in all three games against Minnesota. Madison won twice in those contests, and the Radicals will look to replicate their strategy.

Minnesota only mustered 18.3 goals per game against Madison in 2017, well below their season average of 23.0. Cousins admits that Madison had their defensive number in 2017, but Minnesota is ready for the matchup. “If they have a system that's shutting down what you want to do, it's just stubborn if you're not going to adapt,” said Cousins. “If Madison is trying to shut [Osgar] down, we have a lot of other players who can do similar things. I'd expect to see us rotating players through on unders and keep possession a little bit more, and really trying to keep Madison off-balance, not letting them settle into a rhythm because we're settling into a rhythm.”

Minnesota could still be Madison’s greatest challenger in the Midwest, and this game will reveal whether the two teams are comparable. The game will follow an MLS game between Minnesota United and the Vancouver Whitecaps, so both teams are expecting a larger crowd than usual. Everyone in attendance will be treated to the first test for the runaway leader in the Midwest.

A quick but necessary update. For those of you who are unaware, here’s a quick excerpt from my story on Madison before the season began:

The players may not have mustaches any more this season, but the team has another delightful plan in place to keep their focus on the mundane instead of the final goal.

When I spoke with Pettit-Scantling about the upcoming Minnesota matchup, the champagne inevitably reentered the conversation: “I don't know if you want to drink it,” he laughed. “I got the cheap stuff because I knew I didn't plan on drinking it. I just wanted to spray it all over my teammates when we win. That's the main goal. I need to practice my champagne-opening skills, but I have no intention of drinking that bottle. [It's still going] everywhere we go: practices, games. I'm thinking about making a koozie for it, but I don't know if there's a champagne koozie out there.”

Expect more champagne-related updates throughout the season during Madison’s hopeful march to a championship in front of their home crowd.

Atlanta's Tough Test At The Top

The Atlanta Hustle will finally have a chance to face one of the three teams in the South considered to be their betters. Atlanta is excited to continue their winning streak to start the season and prove they belong atop the division.

The Atlanta and Austin Sol matchup this weekend will be a mirroring of playstyles. Both are smart, calm teams who want their own offensive lines to throw fifty passes before a score. Importantly, Atlanta’s defense is completely oriented around forcing the opponent to match wits with them. The idea is that if the game becomes a test of smarts instead of skills, Atlanta will be at an advantage. Austin could be the team most likely to give Atlanta trouble; does anyone have more combined experience than Austin’s offensive line?

Regardless, coach Miranda Knowles believes that Austin’s confidence on the offense might serve as an advantage: “They do have great throws, but I also kind of hope to capitalize on their egos, that they think they have amazing throws, and they can throw the cross-field, upwind hammer, and we have athletes in certain positions that can actually go challenge and get blocks on those plays. Hopefully, maybe some of the experience that they have actually plays into our favour.”

Furthermore, Atlanta will play far more people during the game, which will tax their players much less. In Atlanta’s recent win over Tampa Bay, the player who led the team in time was Austin Taylor, who played 22 points, split evenly between offense and defense. In Austin’s overtime win last weekend over the Raleigh Flyers, all seven starting O-Line players were on the field for 22 points or more. Atlanta is hoping their split playing time will be another advantage.

“I really hope that our defensive offense punishes them,” said Knowles. “When we do get a turnover, I really want us to capitalize on that. Because I think, they are, they're older, but I wouldn't say unfit. Nobody really wants to run against Tank [Michael Natenberg] or Max Cook or anybody. I do think that they play a pretty regular O-Line that can get fatigued, so I really want to run them.”

Atlanta knows that these benefits will at best only serve nuanced, slight purposes in the game. At this point in the season, they are far more focused on themselves than on any opponent.

“It wouldn't be the first time we've beaten teams with more on-paper talent,” said the Hustle's Matt Smith confidently. “Miranda has a good idea. She preaches the concept of just playing our own game, so regardless of if we're playing a team that tries to run and gun, big long shots, or a team that, whatever they do, whether they run a zone back to us, whether they're a smooth consistent offense, we're probably just going to play our game, see where it gets us, and that includes against Austin.”

Even after the Philadelphia Phoenix played the Toronto Rush to a one-point loss after a furious fourth-quarter comeback, I didn’t believe they were as strong as other divisional opponents. After Philadelphia beat the Montreal Royal, I didn’t believe they were truly a good team. I was wrong, and Trey Katzenbach was right, who told me before the season that the team would compete for a playoff spot.

Philadelphia will embark on a two-game road trip to Canada this weekend, which is always difficult. They will play Saturday afternoon in Montreal, in front of one of the most dedicated fan bases in the league.

“We actually played really well there last year,” said coach and player Katzenbach. “It fires me up, to play in front of a crowd like [Montreal's]. If anything, it made me play better, but I think in general, we've gone up there and kind of relished the moment and the environment, and played well. They're definitely rooting for their team, and you definitely can hear them on the sidelines.”

The Phoenix will journey west from Montreal to Ottawa, where they will take the field again on Sunday afternoon. The Ottawa Outlaws haven’t yet won a game, but they have improved each opportunity, culminating in a thrilling overtime loss to Montreal in which they scored 33 points against a tough Royal defense. Their offense is skilled, and the team will be hungry for a win.

Philly has three well-played games under their belt, and they could well add two more wins this weekend. How did the Phoenix improve so much? There are several reasons why, starting with several veteran additions from the Philadelphia ultimate scene.

Dave Baer hasn’t played in the AUDL since he suited up for the Spinners in 2012. He’s a stalwart D-Line handler who offers Philadelphia the stability and experience that they’ve sorely lacked in past years. Vince Reydams is an athletic defender, while Himalaya Mehta has given the offense a boost with six assists, nine goals, and five blocks already in 2018. Nick Patel hasn’t played in the AUDL since 2015, and he’s been another veteran presence on the defensive line. None of those players were rostered last year, and the team wasn’t sure they would play in 2018 until only a few months before the season.

Importantly, the Phoenix stars have won their individual matchups every week. Sean Mott, Scott Xu, and Ethan Peck have dominated each and every time their cleats have hit the turf.

Katzenbach has shortened his rotation in 2018, giving his seven best defensive players as much run as the offensive line. The team has responded, but a two-game road trip is always more difficult for tight rotations. Instead of playing more players in each game, Philadelphia will instead replace three or four players on the active roster for Sunday, while continuing to play everyone high minutes both days. They’ll draw from a young, athletic pool of college players who haven’t yet suited up for the team.

“We'll have some fresh legs, some fresh athleticism, some young enthusiasm, so hopefully it juices the team on Sunday's game,” said Katzenbach.

This road trip won’t be a measuring stick for Philadelphia. Even if they lose both games, Philadelphia has shown themselves to be far superior to last year’s roster. They’ve already achieved success in 2018, and the rest is just gravy.