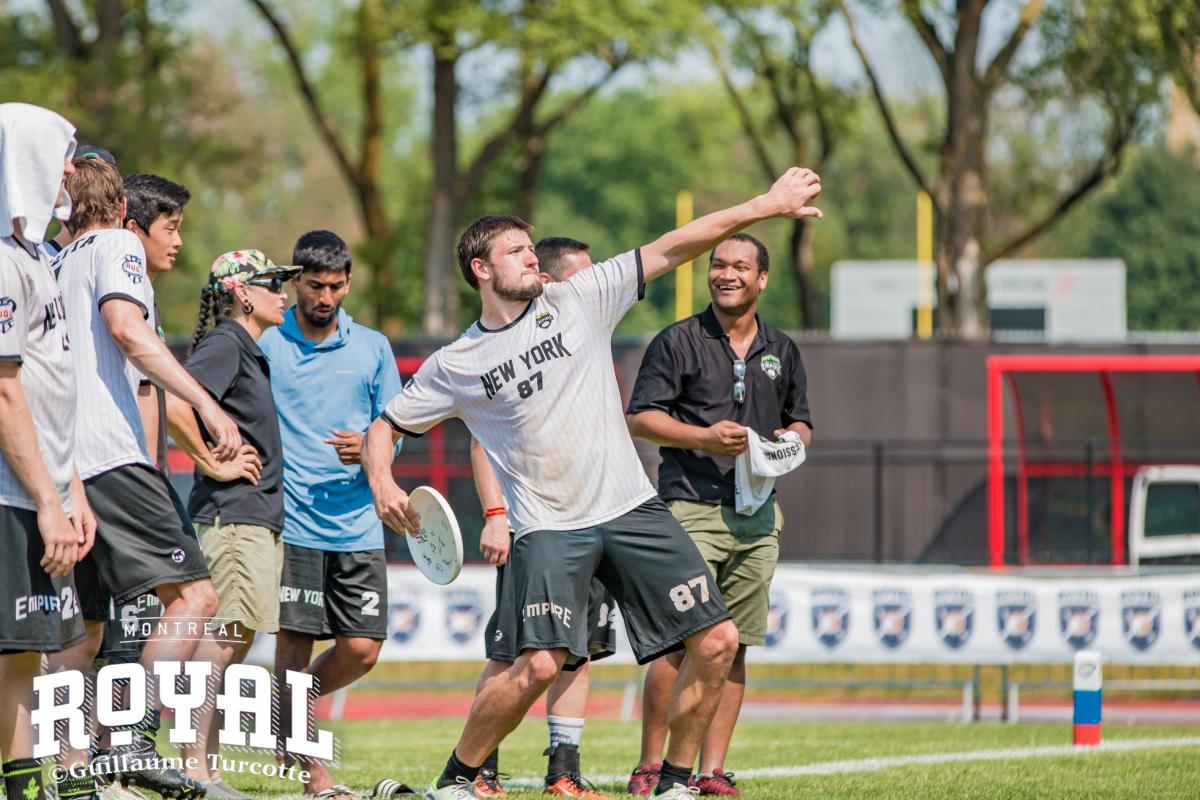 On May 4,2018 New York Empire Head Coach Eileen Murray was driving on a highway in Georgia when a shooter randomly targeted her family’s car. The back windshield shattered from the gunfire. Aside from a cut on her older son’s cheek, due to the broken glass, Murray’s family was physically unharmed by the experience; however, Murray has had trouble in the ensuing few months. 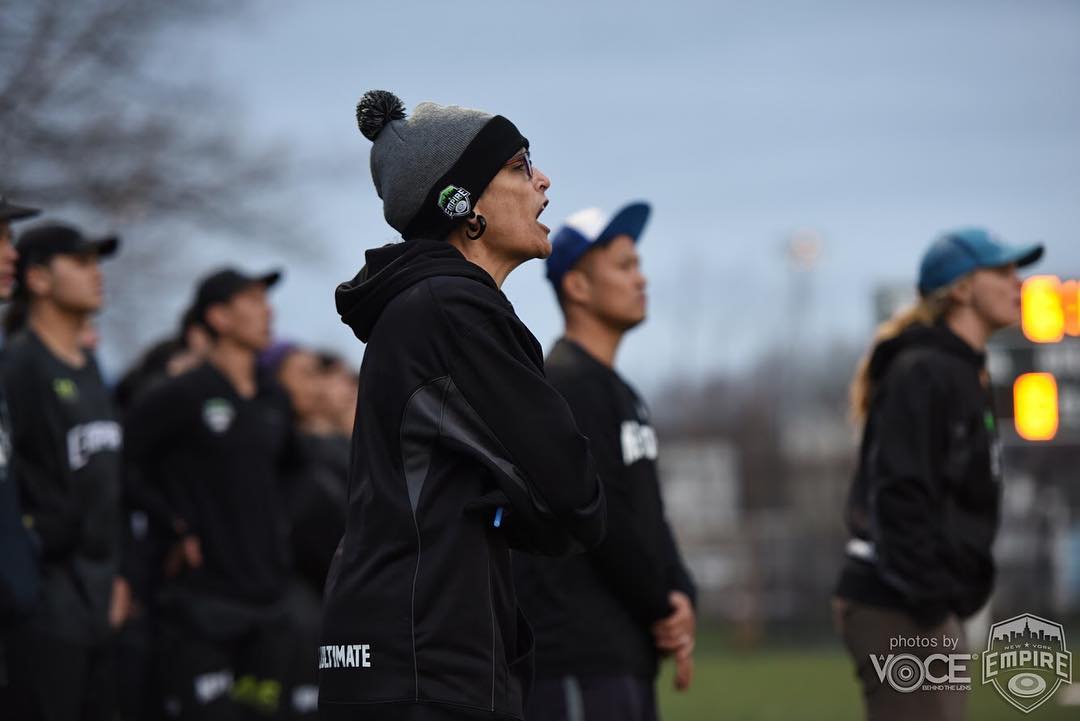 “There was a good 6-8 weeks where I was really struggling,” Murray said. “At first I was kind of denying the struggle, and it kept getting worse, and I was having a lot of symptoms. I reached out and got help. I'm continuing to get help, and have started to feel better, been able to open up to my team leaders, helping me and supporting me, my assistant coaches doing the same. With all the support from my players, my friends, and my family, I feel a lot different now than I did three weeks ago. I feel strong. I feel like I can be a leader. I'm not as agitated as easily. I can be patient. Everything that I think I'm good at is coming back.”

Murray has felt distinctly that her trauma has affected her coaching, especially during a three-game losing streak in June.

“I was struggling in May and June after the trauma that my family experienced in May, and I do think [I showed a] lack of leadership - because that's usually my strong point, helping players be mentally tough. I was experiencing my own struggles, so I was not really able to model that to my athletes, or attend to it in ways that would have been helpful. Especially after the Toronto game [on June 17th], it became really clear to me, gosh, I have not been a good leader for this team for a little while now. I’ve got to get my shit together.” 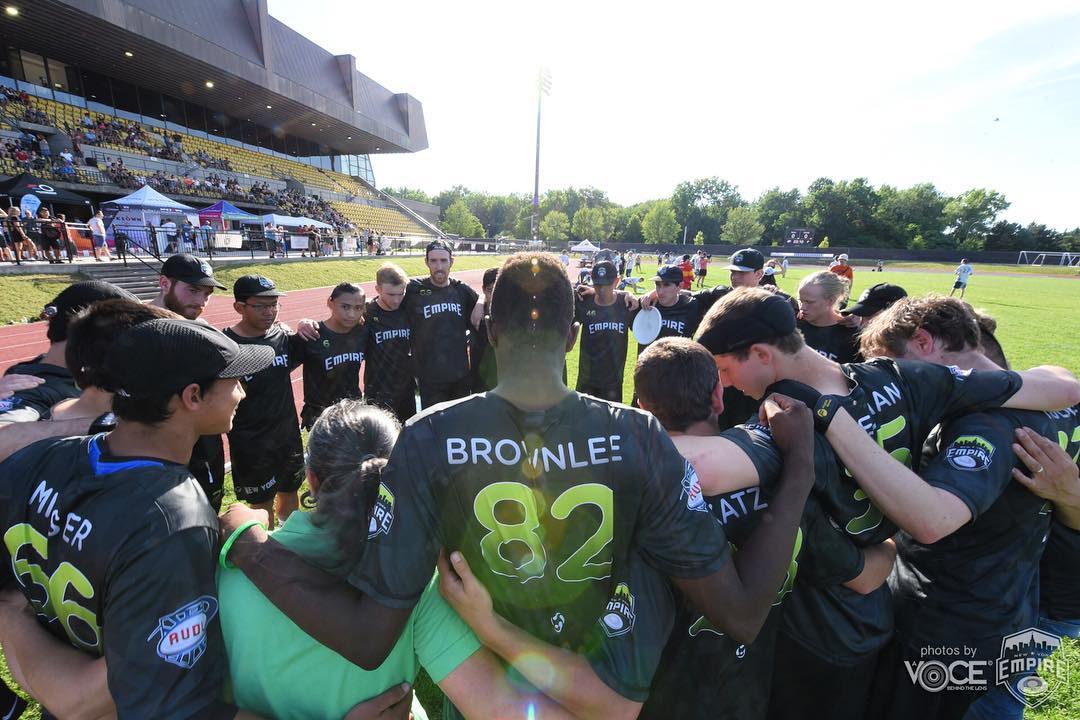 Part of the turnaround for Murray, and the on-field performance of her team, was due to team leadership reaching out to support her. Beau Kittredge, Jeff Babbitt, Ben Katz, Ben Jagt, and Matt Stevens met to discuss the situation, and Kittredge reached out to Murray to explain that she wasn’t alone. The team would support her on the field and off of it.

The past three weeks have seen a huge amount of physical play and boisterous discussion on the field during Empire games. New York and the Toronto Rush were incredibly physical in their June 17 matchup, and punctuated by some spicy chatter between opposing teams after points. New York, in particular, felt slighted on calls and began to let their frustrations seep into their play.

That only became worse in New York’s home game one-goal loss to the Montreal Royal on June 23. The Empire were so infuriated with physical play from the Royal that Empire veteran Matt Auletta earned an ejection for his continued haranguing of referees after what he perceived to be a blown call. In both games, the Empire collapsed after promising early starts, conceding tough losses to potential playoff foes. The team definitively pointed to a lack of mental fortitude as the culprit, allowing their emotions to obscure their focus and quality of play.

Coach Murray used some clever tricks to drill for those situations.

“We at practice focused a little bit on uncontrollables,” Murray said. “In the scrimmage we had before the weekend, I randomly stopped the play, or randomly said that was a turn, or did some of those unpredictable things.”

It worked. The Empire are coming off a 2-0 road trip this past weekend that put them back in control of their playoff destiny. 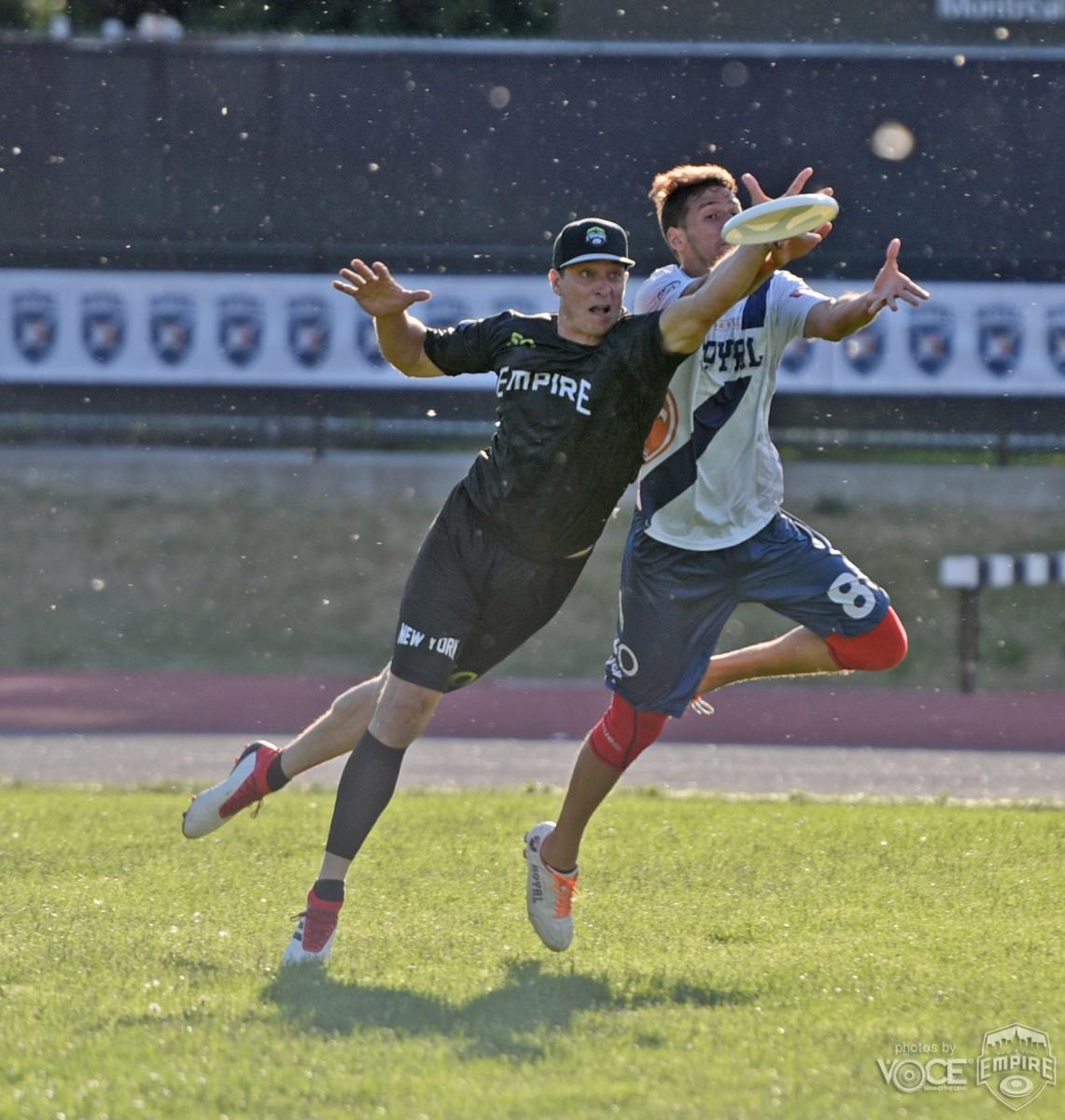 After the Empire’s 29-23 win in another physical game against the Ottawa Outlaws this past weekend, Murray said, Kittredge pointed to his head in a speech to the team and said that’s where their victory originated. New York will surely be ready for more physical play this weekend against Philadelphia, but they’ll have to respond with their heads.

Two weeks ago, the Raleigh Flyers lost a 30-20 game to the Atlanta Hustle that had media and opponents alike scratching their heads. The Flyers’ roster was certainly not at full strength, but with Jack Williams and Jacob Fairfax in Atlanta, Raleigh certainly had enough star power. They played a poor game, frustrated by Atlanta’s zone defense that forced countless errors in execution. Even more important, they struggled to imprint any defence on Atlanta’s patient attack. 80 percent of Atlanta possessions ended in a score rather than a turnover.

Raleigh only tallied seven blocks, and three of those came from the offense. Fairfax added two Ds, but he didn’t have enough help from his fellow teammates when playing defense after a turnover. Atlanta scored 12 break points, but Raleigh’s offense only scored three times after a turnover.

Raleigh will have a chance at redemption this weekend. They’ll play a similarly motivated Hustle team, who will need another victory to ward off the Austin Sol for third and final playoff spot in the South Division. Atlanta's Daniel Sperling and Matt Smith showed incredible chemistry in Atlanta’s win over Raleigh, combining for seven assists and nine goals. In their 18 points played together, they won their defensive points 6-4 and their offensive points 4-0. Atlanta will need similar production to top Raleigh again.

Raleigh, on the other hand, will still be with a short roster. Though they won’t have all their stars, they will certainly have more, as they’ll be playing at home this time around. Raleigh clinched their second place position with their win over the Nashville NightWatch. But they are playing for pride against a regional rival that has fooled them more than once—that is motivator enough.

4. Wildfire Waning, But Not Out

The Chicago Wildfire are playing for their AUDL playoff lives. At 5-6, and with the Minnesota Wind Chill sitting at 7-5 after a July 3 loss at Madison, Chicago needs to win out on the season, and needs Minnesota to lose out, in order to have a chance at the playoffs for the first time since 2015. Chicago is confident.

The Wind Chill will play a road back-to-back next weekend against the Indianapolis AlleyCats and then the Wildfire. The Wind Chill beat the 'Cats 22-18 back on June 2 in Minnesota, but Indy has shown an edge playing at home this season.

For now, however, Chicago is focused on themselves. They're coming off a two-goal loss in Minnesota this past Saturday. The Wildfire play the same schedule as the Wind Chill, but in a different order. This weekend, they’ll play a win-or-go-home game at home against the AlleyCats.

“I think we need to, similar to against Minnesota, really force long points,” said King of his strategy against Indianapolis. “That is to our advantage. They have been overlooked the last two seasons. They are a very talented team, and they play together very well. They're one of the most fluid teams I've seen, even comparing that to Madison, and their core has been together for five years, basically. They know where each other are going to be cutting, and they've got pretty unusual throws. They find unique spaces to cut to and to throw to.”

Chicago previewed a new zone against Minnesota last time around, which forced middle when the disc was in the middle, and forced sideline when the disc was on the sideline. The flexible and dynamic zone forced record-setting numbers of throws from Minnesota’s handler core, especially Tony Poletto. Though Minnesota was able to score relatively consistently against Chicago, the Wildfire hope that their zone will be more successful this weekend against the AlleyCats.

“I don't know how many players can complete 90 passes without defense,” said King. “Statistically, that's a great outcome [for us]. Unfortunately, [against Minnesota], it just didn't tip our way. It still showed that the defense worked. We made them do what we wanted them to do, which was play a really long O point and require a bunch of passes that might cause a turnover.”

One boon for Chicago’s defense this weekend will be increased time on the defensive side for some of Chicago’s superstars. Stars like Kurt Gibson and Pawel Janas will start to see time on both sides of the disc now that Chicago is desperate for wins.

“I've been a little tentative to play guys hard both ways, but going down the stretch, it's going to be all out. Guys like Kurt and [Nate] Goff, even Pawel, [Michael] Pardo, those guys are going to see a lot of action both ways,” said King.

Chicago has been incredible when those players are on the defensive side. On the whole, their defense has been lackluster on the season, allowing opposing offenses to score on an elite 72 percent of points. When Gibson has played defense, that number drops to 68 percent. With Janas beside him, opposing offenses score at an even lower 62 percent. Though it’s a small sample size, Chicago holds opponents’ offenses to a measly 60 percent scoring rate when Ross Barker and Goff join Gibson and Janas on defense. That’s an elite number, better even than Toronto or Madison’s league-leading defensive analytics. Chicago has the horses to match the talent on Indianapolis’ potent offense, and King will unbridle them this week.

5. Montreal's Season On The Line Against Toronto

The Montreal Royal can still make the playoffs in the East, but they’ll need to beat one of the best and most dominant teams in the league to do it. Montreal was in pole position in the East after having topped the New York Empire twice in a row only two weeks ago. Then they traveled to Philadelphia on June 24 after an emotional win in New York the night before and laid a stinker, losing 27-19. They followed that up by losing to New York 20-14 at home five days ago.

Though Montreal has been a roller-coaster of incredible play oscillating with flat performances on the season, I viewed them as the clear second-best in the East only three weeks ago. They can still make the playoffs, but they’ll need to accomplish a feat that’s only been done thrice in league history (twice by the Montreal Royal): win in Toronto.

The Royal aren’t approaching this game as anything special, trying to focus more on the joy of the sport instead of the pressure to perform.

“We're not really focused on results right now,” Royal Captain Kevin Quinlan said. “We're just focused on trying to execute the little things. That's what we were talking about in practice, and just realizing that we have this awesome opportunity to play in front of crowds, and just to play with each other.”

The Royal will be short-handed, with Quinlan unavailable, and Morgan Hibbert still hampered by his knee injury. Toronto on the other hand will be well-rested, coming off of a bye week, with players returning from injury, and foreign superstar Justin Foord joining the team for the first time in 2018. Montreal will start the game climbing out of a hole, but if any team in the East has the talent, it’s the Royal.