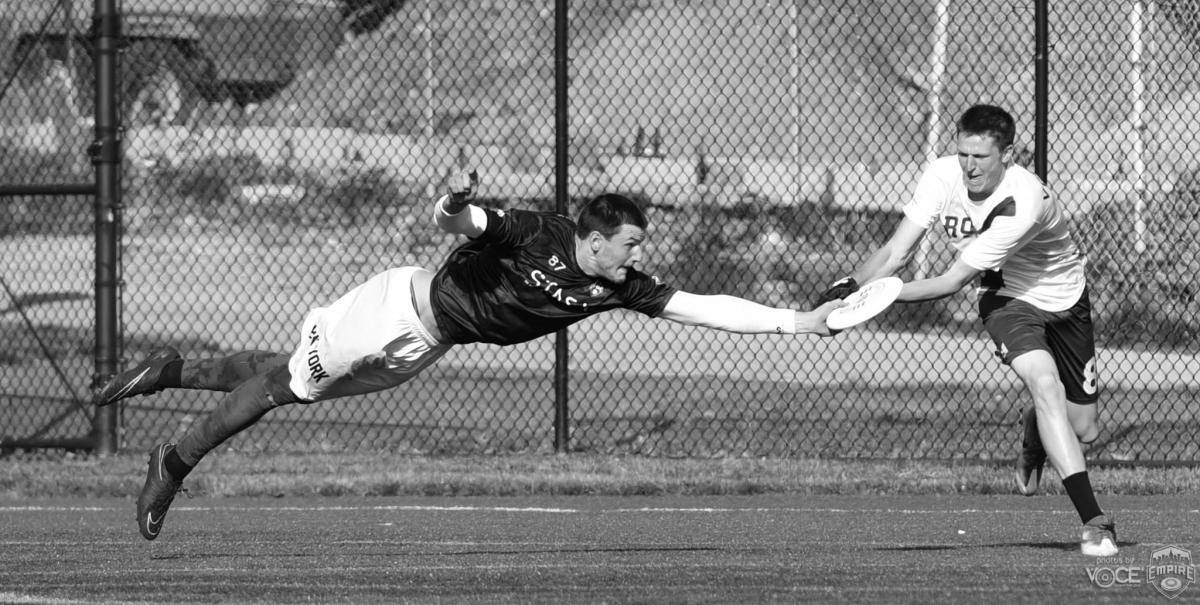 With only six games played of their 2018 regular season schedule, the New York Empire have a lot of frisbee left to play yet—they’ve played the fewest games of any team in the AUDL so far this season.

“I know! I know! It's been really weird,” Head Coach Eileen Murray said of the scheduling quirk. “I see other peoples' records, and they have twice as many games. Wait, what? It's so weird!”

New York’s sprint to the finish line begins this weekend with a back-to-back road trip in Canada as they travel to Montreal for Saturday night’s Game of the Week, before a Sunday afternoon game in Toronto. This is one of the most difficult road trips in the East this season, and New York’s results this weekend will have a significant impact on the playoff picture in the division. Winning both would put New York at 6-2, well within striking distance of the Toronto Rush and first place in the East. Losing both...Well, that’s not something Murray is entertaining as a notion.

"Obviously, that's not a position we want to be in,” said Murray. “I don't even have that in my mind, 4-4, because I don't think that's going to happen, so that's not even something that I'm considering right now.”

New York will be bolstered as big name players return from injury. Jeff Babbitt will return. Beau Kittredge and Ben Jagt will be re-evaluated on Thursday night practice, but the team is hopeful that both will be able to go. Because of the taxing nature of AUDL games, combined with the back-to-back, Murray isn’t sure that any returning players will play both days.

“We are thinking about that, especially with not necessarily knowing right now how well the people who are slightly injured are going to play, maybe they are only going to be able to play one day,” Murray said. “We are going to bring some extra players and make some decisions as they seem appropriate, both after practice Thursday night and after the game on Saturday.”

No matter who is on the field for the Empire, it’s exciting to finally have the team in action.

The last time Indianapolis played Madison in Week 2, they lost 20-13. The second quarter was the undoing of the 'Cats, as they were outscored 1-6 in the frame and looked rattled against the Madison defensive pressure. Even though they weren’t looking for excuses, the AlleyCats knew that the weather was an important contributor to their troubles.

“The conditions were pretty rough,” said Indianapolis veteran Travis Carpenter. “We didn't handle them very well. It was really cold outside, and it was pretty windy. It was so cold for me, I couldn't even wear normal ultimate games. I had to wear these fake gardening gloves just to be able to throw, because my hands were getting cold so easily. That was pretty brutal. It was just, in general, kind of a miserable game. It was one of those games where you get there, the weather's so bad, and you just want to leave. You're just counting down the minutes until it's over.”

The 'Cats will have a few advantages this time around. Indy will be playing at home on Sunday, and Madison will have played the Pittsburgh Thunderbirds the night before. Furthermore, the Radicals seem more beatable than ever before. After their loss to the Raleigh Flyers, Madison only barely squeaked past Minnesota and the Chicago Wildfire last weekend. They were losing at varying points in both fourth quarters, even though they finished the weekend an impressive 2-0.

Indianapolis has never beaten Madison, but they have likely never had a situation as favorable as this weekend.

3. FlameThrowers vs Spiders, Round Four

Saturday's matchup between the San Jose Spiders and San Francisco FlameThrowers will be the fourth (and final) time these two teams meet this regular season. San Francisco holds the series edge 2-1 with a goal differential of just +3. But San Jose currently sits a half game in front of their Bay Area rivals in the West Division standings. This game will have huge ramifications in determing seeding in the playoffs.

Neither team has had full availability in the three previous matchups. San Francisco was dealing with significant roster turnover following their 2017 championship run, and San Jose was struggling with a lot of injuries.

The Spiders are still having to adjust their expectations for play this season.

“I thought we could make a real contender, but this year has been more about fighting through the various injuries and issues that have come up, rather than really pushing ourselves early in the season,” said Spiders Head Coach Tyler Grant.

In their Week 7 clash in San Jose, Lior Givol was missing for the FlameThrowers and Justin Norden for the Spiders. Though San Francisco triumphed, both teams missing top players is a slight positive for San Jose, who sports a deeper and more balanced roster.

“Against San Francisco, I think we do have, top to bottom, a slightly more consistent and better roster,” said Grant.

The balance will have to be on show for San Jose to compete. Though The FlameThrowers lost their most recent contest against the Los Angeles Aviators, their level of play over the last month has been terrific. Now that everyone in San Francisco knows what is expected, the team has improved dramatically since the early few games. With stars like Antoine Davis, Marcelo Sanchez, and Givol dominating on the offence, Greg Cohen is enough to single-handedly supercharge the defence.

San Jose is physical, but can they rattle Davis? He is too strong to be bumped off his line. Most teams back San Francisco’s stars, and they are adamant about taking the simple unders to open up the field. San Jose, on the other hand, is dedicated to challenging unders as much as possible, allowing nothing easy. If they don’t give the FlameThrowers any free space in the backfield, then Davis will happily strike to the endzone in single coverage.

San Francisco’s stars, and how they handle physicality, will likely determine the results of this contest.

At 2-6, the Seattle Cascades are realistically out of contention for playoffs in the West. Of course, that doesn’t mean the season is over. This weekend, they’ll play the Los Angeles Aviators and San Diego Growlers. Over the next few weeks, Seattle will have several games against the Growlers, San Jose Spiders, and San Francisco FlameThrowers. They will have a huge say in determining who makes the playoffs from the division.

“The best thing we can do is, I don't want to make this not fun for [our young players],” he continued. “I don't find fun [in] losing. We just gotta have fun while doing it and being a team that maybe could wreck at least one or two peoples' seasons whenever they play us. We're not gonna give up. That's always been our motto. We're going to keep fighting and smiling through the grit, through the grind.”

Burton won’t be playing in Seattle’s upcoming double-header, but any team that loses to the Cascades will have a difficult task making up for it in the race for the playoffs in the West. That’s the remaining source of joy for Seattle.

Mark Burton is one of the most decorated and talented AUDL players in history. He joined the league in 2016 and has made an All-AUDL First Team every year since. His 81 assists in 2017 were only 5 short of the all-time record set by Tyler DiGirolamo in 2015. His 64 assists so far this season put him well ahead of the pace to set the record, though he likely won’t capture it.

“I will probably not get it,” he said. “I'm missing a bunch of games coming up. Sadly, I will not be [there] this weekend, I'll miss the double-header. Then [I’ll miss] another double-header for World's. I have a couple games left, and we'll see what happens. But yes, of course I looked at [the record].”

Burton continued that he is considering hanging up the cleats.

“This is probably my last year playing AUDL. I may play one more depending on where things go next year,” he said. “It probably is my last year. I'm 32, turning 33. It's a lot on the body, and I kind of want to do other stuff with my life as well. At the same time, all of a sudden it hits January, and I'm itching to play. If I'm itching to play [again], I will. I'm not thinking ahead, but in the last couple games, I will play, and I'm taking those as my last ones.”

Burton was incredible for the Cascades in 2016, as he led the team to the Finals after likely the best comeback in league history against the Madison Radicals in the first round at Championship Weekend. His three years in the AUDL have been momentous, and if these last few weeks constitute his final games in the AUDL, then the onus is on us to appreciate them.