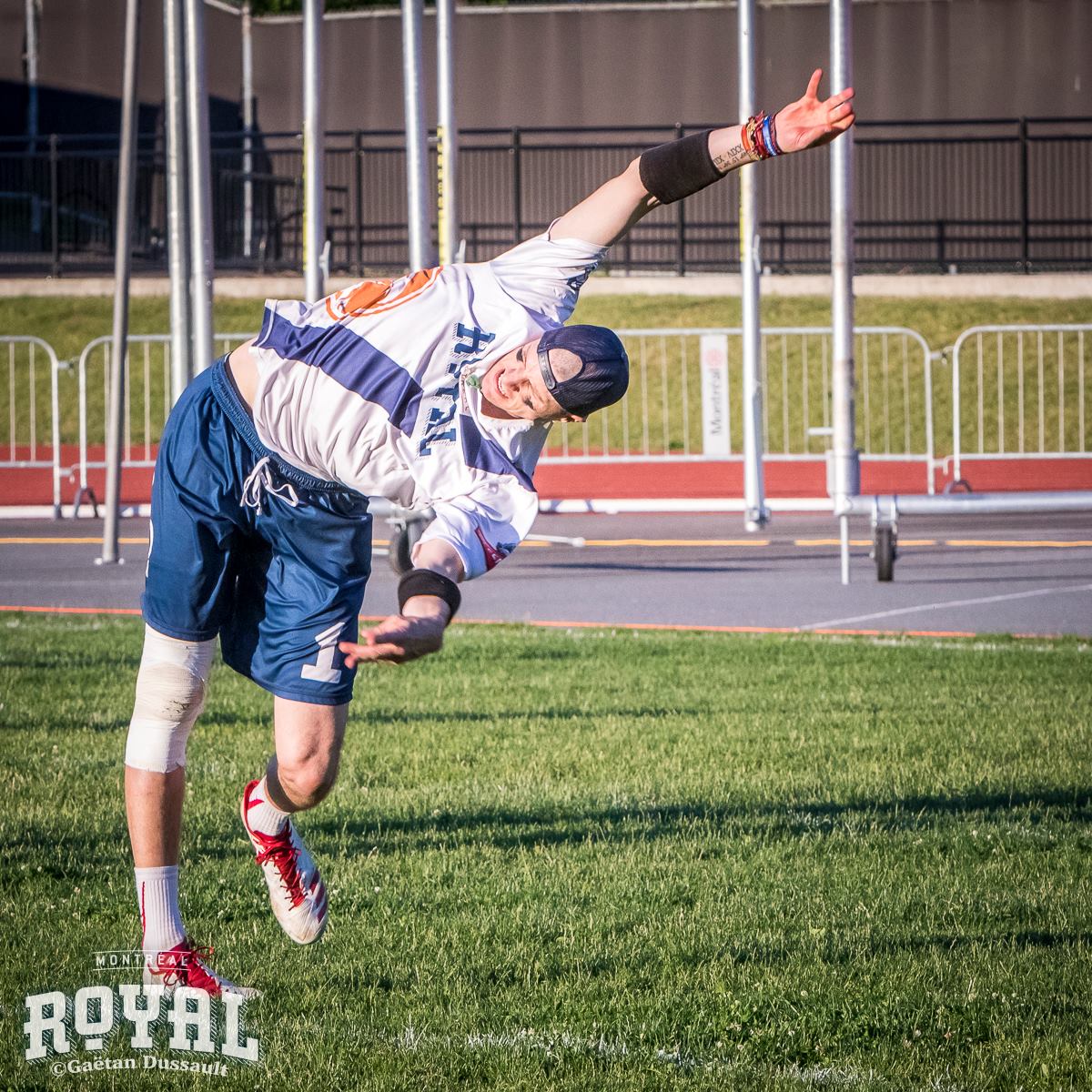 The Montreal Royal (5-4) have snuck into second place in the East. They’ve done so without a dominant statistical leader. No Montreal player ranks in the AUDL top-5 assists- or goals-per-game. The team’s offensive conversion rate is a middling 63 percent on the season, which ranks below the 1-9 Tampa Bay Cannons’ 65 percent. Montreal wins games around the edges, finding competitive advantages wherever possible. They lead the AUDL, for example, with the longest average pull hangtime, which allows defenders the most amount of time to reach the offense and deny an easy centering pass.

Like a well-placed banana peel, a good pull is an overlooked defensive tool. A perfect pull will not only fly all the way down the field, but also hang in the air long enough for the defense to set up deep in their opponent’s side of the field. Good pulls create Callahans. Good pulls win games. And there are no better or more entertaining pullers in the AUDL than Morgan Hibbert.

Hibbert has never been as strong as he is long. An engineer by trade, he’s worked for years on using the physics of his body to propel the disc further. His most important weapons are his flexibility and gigantic wingspan, which he uses to create a slingshot effect.

“Just watching people who do the hammer throw, or discus, or things like that in the Olympics, and watching them and how they generate power, I realized that I have a pretty strong core,” said Hibbert. “With the length of my body, kind of using my whole body like a lever arm, I could generate a lot of power if I could really use my whole body to twist.”

That twisting creates for a unique spectacle. Every good puller has a distinct technique to ensure the disc flies the whole distance of the field. Justin Allen of the Raleigh Flyers nearly dislocates his right elbow with his monster flick pulls. Jeremy Norden of the Toronto Rush performs a tidy pirouette, spinning 360 degrees, before he launches backhands down the field. Hibbert’s pulls are my favourite.

“I really twist and coil my body up, and then release it the way I do, in a very aggressive fashion,” Hibbert said, describing his technique.

Hibbert starts his pull with two or three loping skips, like a cartoon character dancing all the way to the lollipop tree. He then turns his body inward, rotating to transfer his power into his legs, or to look a little more like Gollum.

“I set my body up to twist it and load it up so that I'm twisted around as much as I possibly can. I'm almost backwards from where I'm going to pull, so that my feet are forward, but my body is backward,” he described.

With each step, he rocks his arms back and forth with the disc while he inches towards the line, like a batter practicing his swing before the pitch. When the time finally arrives, he uses his giant wingspan to pull the disc back as far as humanly possible. He releases with his arms, yes, but also his legs, waist, neck, and tailbone; everything goes into the toss. He plants all his weight on his right leg while rotating his entire body through his release. His momentum after the disc leaves his hands forces his torso to bend dangerously towards the ground, past the 90-degree mark, until his head nearly scrapes his feet, while his arms wave haphazardly through the air above his body. He always bounces back, snapping his body into place, joints and bones be damned.

“The aftermath of my body flailing around is just me uncoiling myself as violently as I can,” he laughed.

There are several results of HIbbert’s pulls. One interesting side-effect is that because of his post-release flailing, Hibbert is limited in his ability to defend certain players: “I can't cover handlers if I'm pulling. I am way behind everybody to be able to get down there. Cup or marking handlers, I don't do it.”

Another result is that his right knee is a devastated warzone. He puts enormous pressure on his right leg; it’s the fulcrum through which all of Hibbert’s momentum flows. His right knee is already missing an ACL and PCL, and Hibbert recently sprained the same knee’s MCL. His pulls take a toll. Hibbert had to abdicate pulling responsibility towards the end of Montreal’s most recent game because of the strain on his knee. It’s healed somewhat in the week since, and he will likely pull this weekend against New York.

However, the foremost result of Hibbert’s pulls is that he is consistently able to pin an offense in their own endzone. Like a coffin corner punter, Hibbert’s pulls are more an offensive weapon than a defensive one. As long as Hibbert’s body is able to bear the strain of his spasmodic technique, he’ll continue devastating offenses and manufacturing break points with his trademark pulls.