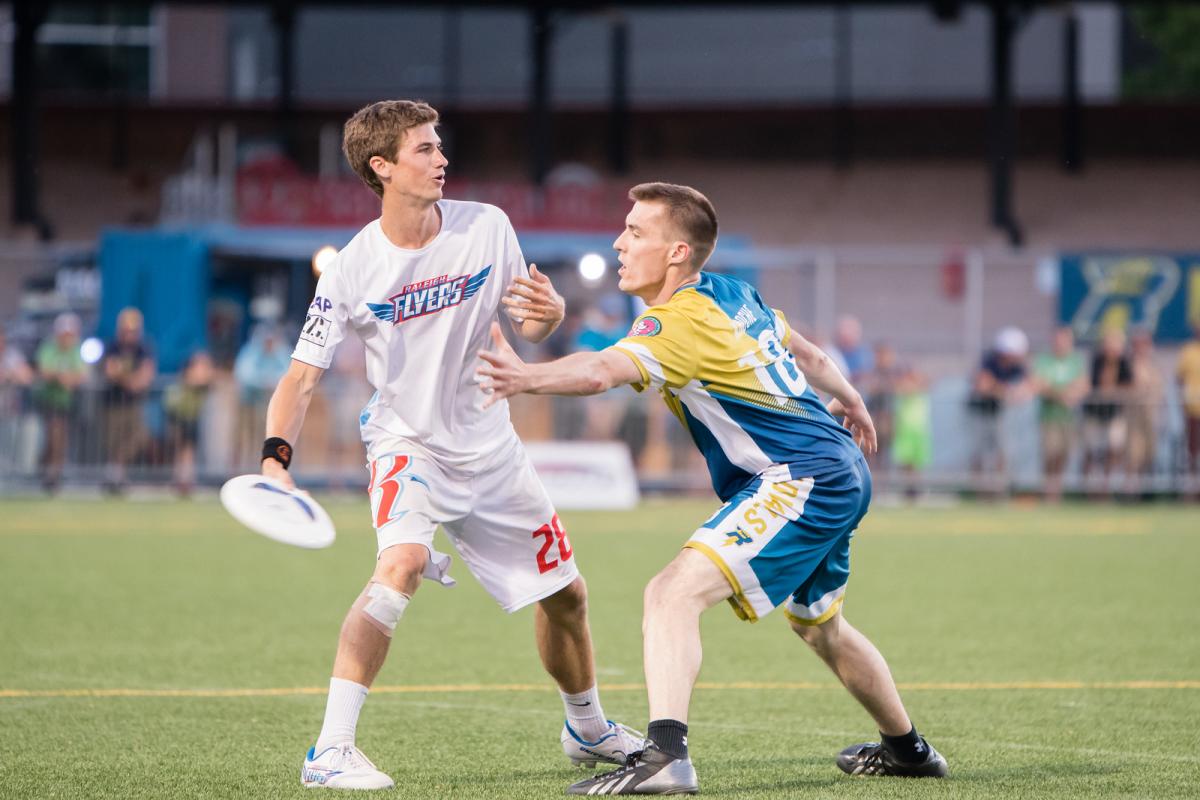 After 16 weeks and 161 games, the 2018 AUDL regular season is over, and 11 teams remain with a shot at the title. 2017 champions the San Francisco FlameThrowers will not be returning to the postseason to defend their title, and only two teams - the Dallas Roughnecks (2016) and Toronto Rush (2013) - have won an AUDL championship heading into the playoffs. Two other teams - the Austin Sol and San Diego Growlers - will will make their first postseason apperance in their respective franchise history. At the start of the playoffs, Dallas enters as the number one overall seed, with Toronto, Madison, and Los Angeles filling out the top four, respectively. 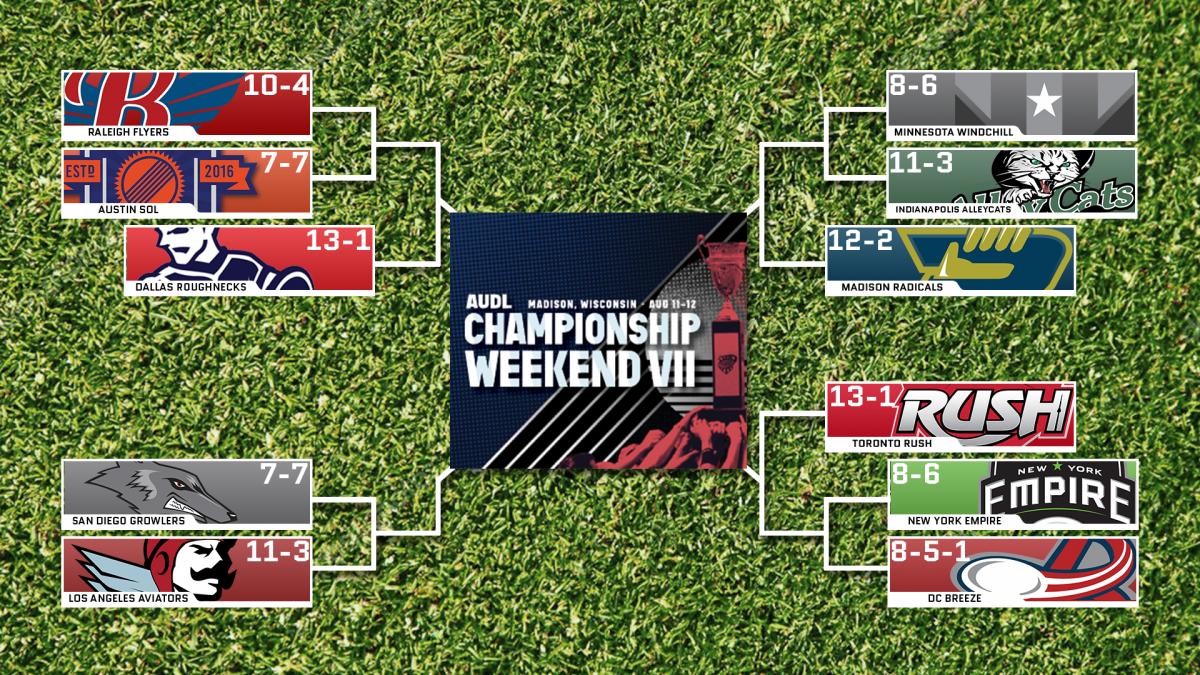 All paths lead to Madison, WI for the seventh annual Championship Weekend on August 11-12. Each divisional championship winner will square off in a semifinal game on Saturday of that weekend, before a champion is decided on Sunday.

The broadcast Stadium "Game of the Week" playoff broadcast schedule will be as follows: 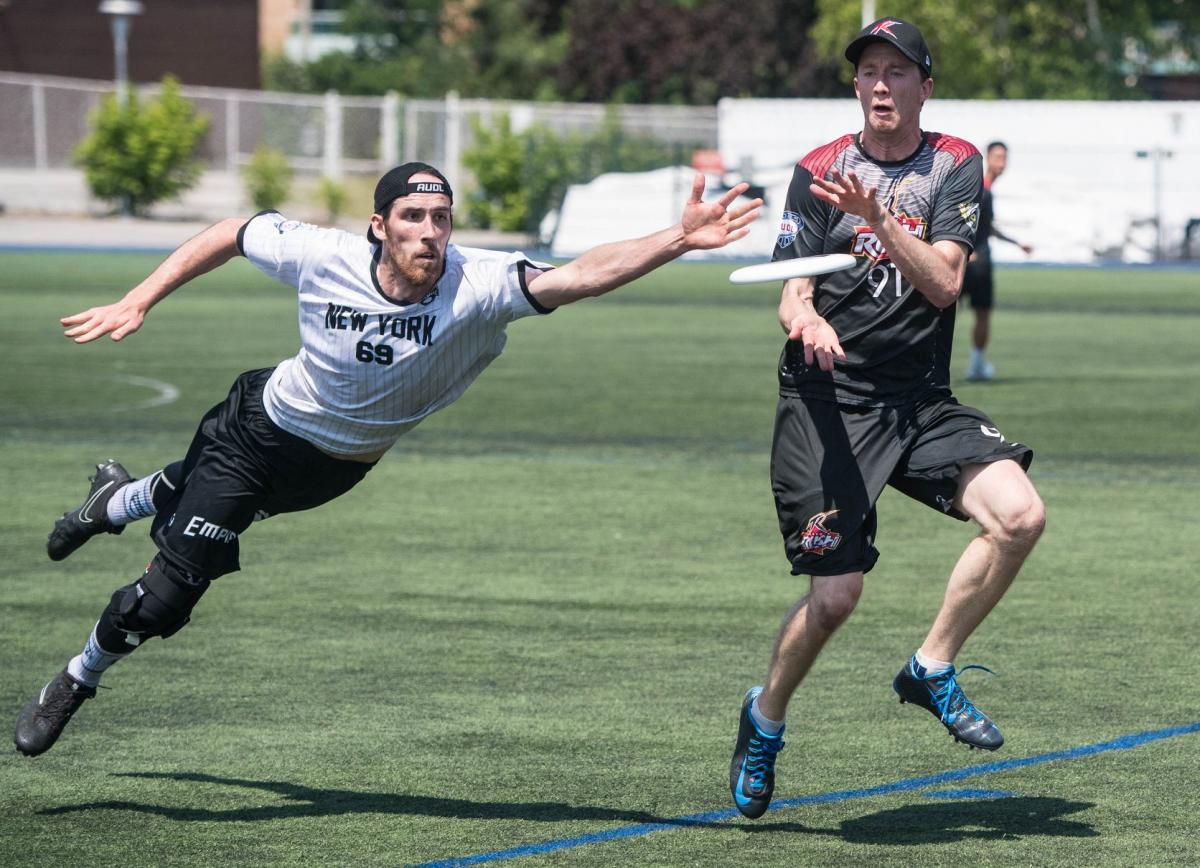 Just a week removed from a 10-goal DC Breeze win against the New York Empire, the Breeze and Empire are back at it in the opening round of the East Division playoffs. The Breeze won the regular season series 2-1, and were responsible for eliminating the Empire the last time New York made the playoffs in 2016. Rowan McDonnell is having an MVP-caliber season for DC, surrounded by young playmakers and backed by an opportunistic defense led by Delrico Johnson. The Empire have endured an up-and-down season of attrition, and if nothing else are battled tested. Big man Ben Jagt has had a career-year for New York, having emerged as a favorite target of gunslinger Harper Garvey.

The winner of DC/NY will go on to face the six-time reigning East champions the Toronto Rush in the divisional championship. Toronto's lone loss during the 2018 season came against DC on June 9. 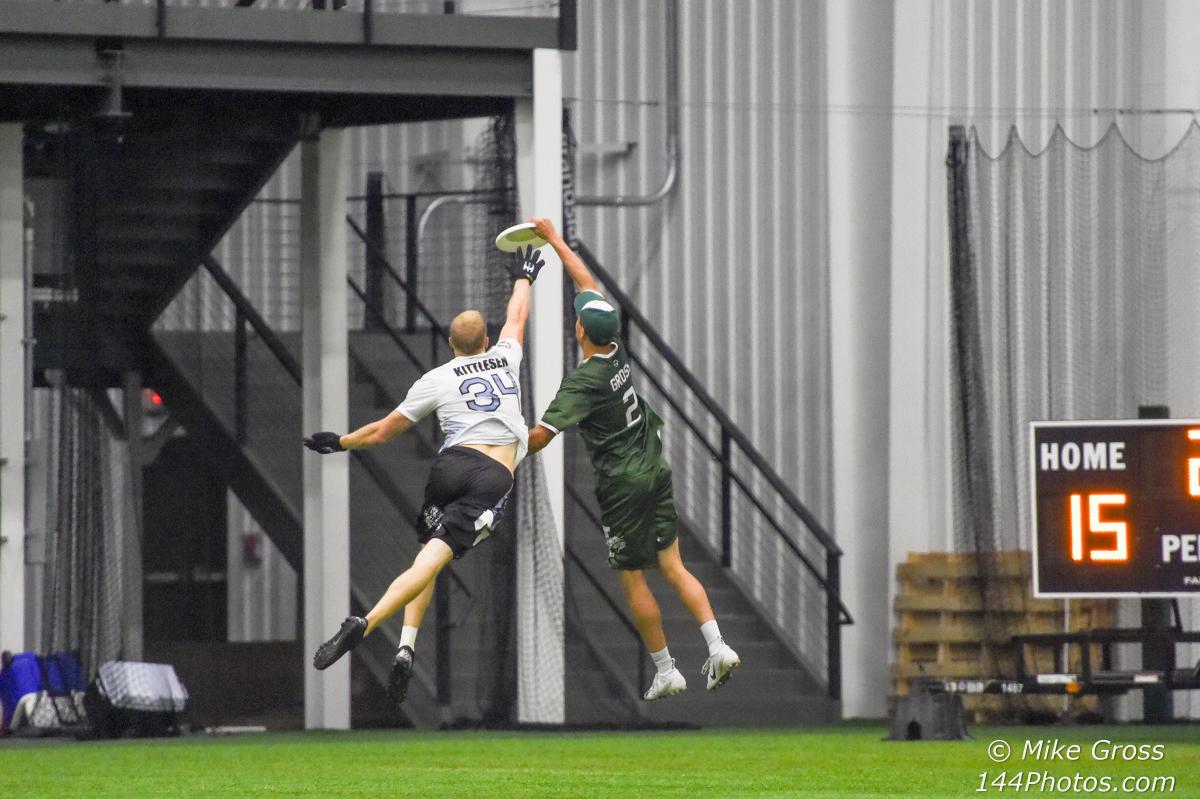 Before last week, the Indianapolis AlleyCats had not won against the Minnesota Wind Chill since May 4, 2014. But riding the momentum of their Week 16 win, their best regular season to date, and the emotion of hosting a home playoff game has the AlleyCats at an all-time high. Rick Gross is putting up video game numbers on offense and defense, leading the league in blocks while also tied with teammate Cameron Brock for second in the league in goals. But Minnesota is heading into their third straight playoff appearance and tied the regular season series against Indy 1-1.

The winner will face a Madison Radicals team that has represented the Midwest Division at Championship Weekend in each of the past five seasons, and will have the added motivation of having the opportunity to win a title in front of their home crowd in 2018. 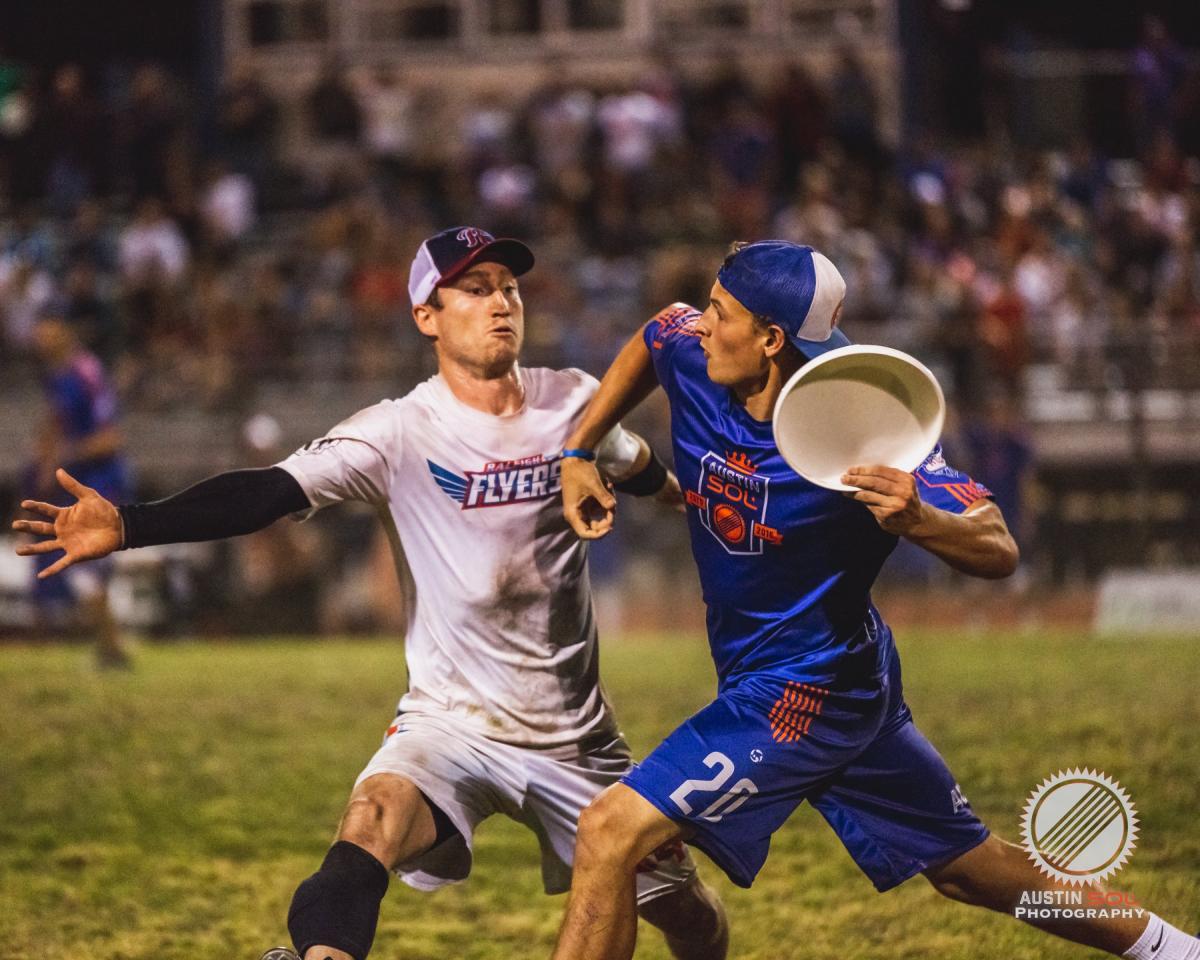 In one of the most thrilling regular season games of the season, the Austin Sol got the better of the Raleigh Flyers 25-23 in overtime in Texas. The Sol had a tumultuous season between expectations and results, but their win over the Flyers remains a high point. Raleigh, meanwhile, has won five of their last six games and is led by reigning MVP Jonathan Nethercutt and offensive star Jack Williams to go alongside perhaps the league's most talented roster, top-to-bottom.

But once again the Dallas Roughnecks remain the gatekeepers of the South, and any path to Championship Weekend runs through their blitzing attack led by Jay Froude and company. 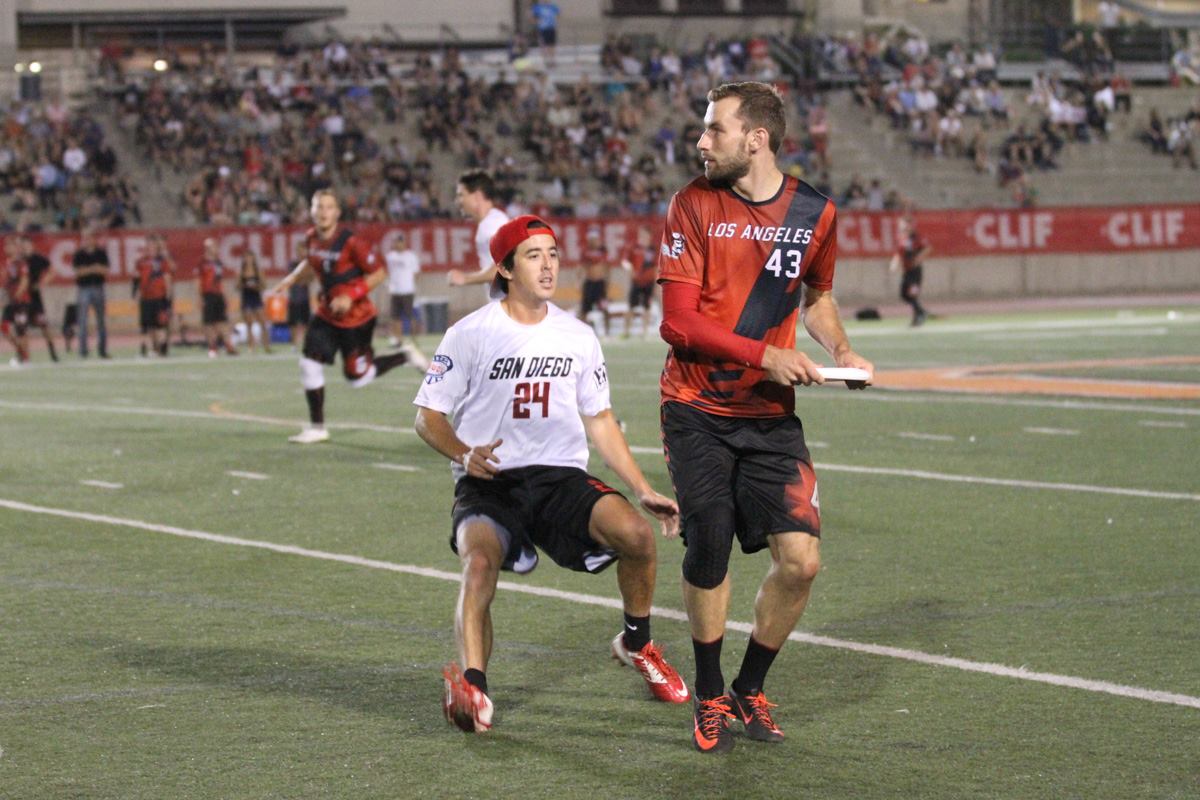 For the first time in the history of the West Division, neither San Jose nor San Francisco qualified for the playoffs. Instead the Los Angeles Aviators were the class of the division, losing only once to a divisional foe during the 2018 season. However, the foe was the rival San Diego Growlers in the last weekend of the regular season. League goal leader Sean McDougall and the Aviators have shown they are one of the most explosive offenses in the league, but can the Growlers and Travis Dunn elevate in their first playoff appearance as a franchise?