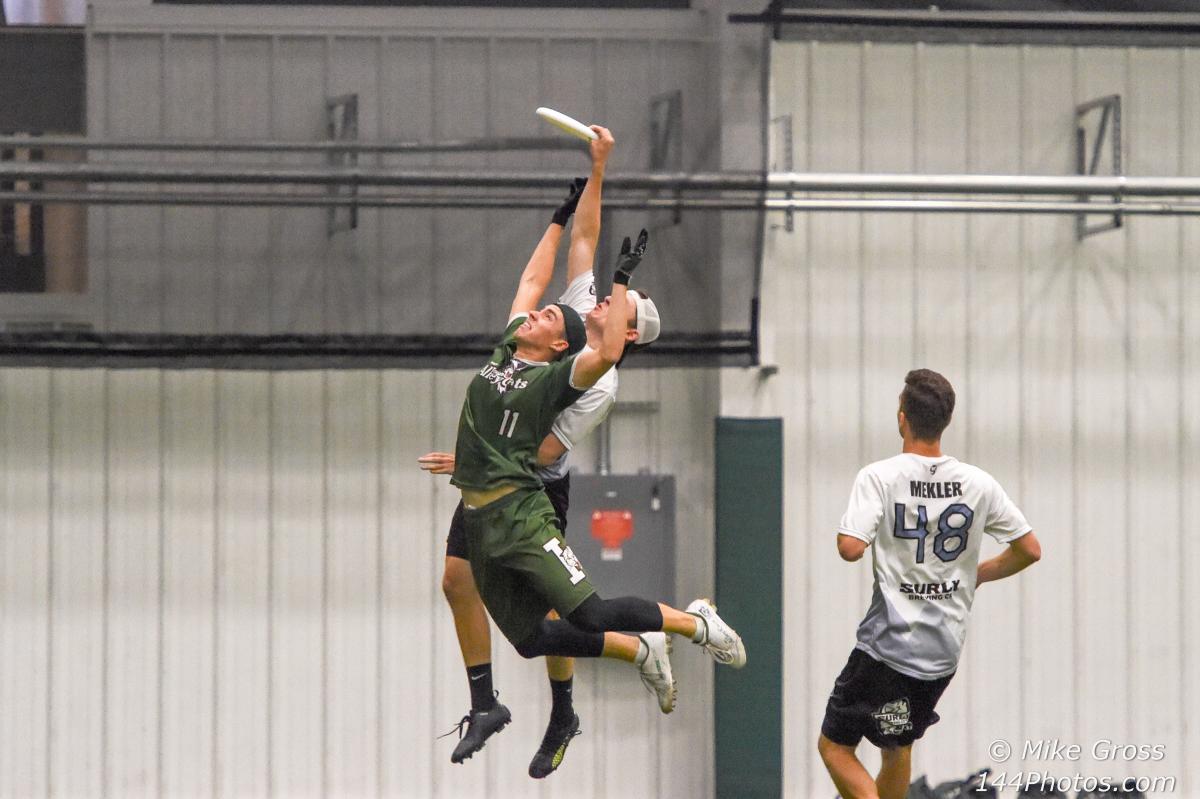 The Indianapolis AlleyCats (11-3) and Minnesota Wind Chill (8-6) represent two different approaches to team building in the Midwest. The AlleyCats are a high-flying offensive juggernaut, with the skill and athleticism on their O-Line to rival any team in the league. The Wind Chill are more methodical, and more precise, relying on a team system rather than individual superstars.

The resulting first round Midwest Division playoff matchup, which will take place in Indianapolis this Saturday, July 21, is a dream. Though the two teams split the season series 1-1, don’t expect either game to be a great predictor of this playoffs matchup. Especially the most recent game on July 14, when Indianapolis defeated Minnesota for the first time since 2014 by a score of 26-16. Minnesota wasn’t rostering many of their top players, including Ryan Osgar, Greg Cousins, Jason Tschida, and a stable of athletic defenders. The ‘Cats had free reign on offense against a Wind Chill playing with a lightened travel roster—the playoff matchup will be different.

Indianapolis had one of the league’s most impressive offensive units, scoring on 77 percent of their offensive points. Keenan Plew and Travis Carpenter are terrific handlers, and they possess every throw in the book between them. As team captains and emotional leaders, they are as responsible for the AlleyCat’s success over the years as any other individuals. They are also the tone setters for an offense that makes very few unforced errors.

Indianapolis throwers average so few turnovers because of the talent of their deep cutters. Cameron Brock will outrun and outjump anyone, and he’s perhaps less explosive than team-and-possible-league MVP Rick Gross. Though Brock and Gross have similar assist and goal numbers, Gross leads the team with 28 blocks from the O-Line. When the offence does turn the disc over, it is confident that Gross will reclaim it, come hell or high water. Gross’ plus-minus (goals + assists + blocks – turnovers) of 86 finished for second-best in the league, only two behind 2018 AUDL league leader Sean McDougall of the Los Angeles Aviators. Brock, at 72, is fifth-best in the league.

Even though they are confident in their own abilities, Indianapolis knows that they will still have to play a smart game against Minnesota.

“They have very athletic guys,” said Carpenter. “In [an earlier] Minnesota game, they skied Rick a couple different times, and when we play other teams, that never happens. If a 50/50 goes up, we know Rick's going to come down with it. If we put up a disc to Levi, and he's in a sprint against someone, we know he's going to outrun them. With Minnesota, that's not the case.”

Minnesota as a team has enough explosive individual athletes to fluster Indianapolis. Cousins is an elite athlete who plays on the defensive side for Minnesota, and he can matchup well with anyone on the ‘Cats. He’ll likely match up against Carpenter or Plew, and deny them the disc, trying to squeeze the handler into space downfield where he can beat them in the air. Minnesota has elite downfield defenders in Jordan Taylor, Colin Berry, and Charlie McCutcheon, and the Wind Chill’s defence has taken its toll on Indianapolis in the past.

“Their defence, it seemed like it happens every year, their defence always seems to shock us,” said Carpenter. “They seem to have so much better defence than everybody in the division. They're a lot more physical than other teams. They really put their bodies against you, and they do a lot of pushing.”

Minnesota’s offence boasts a plethora of consistent possession handlers. Tony Poletto almost defines the position, more comfortable with the spotlight on others, just moving the disc side-to-side to grind down a defence. Tschida is another elite center handler. Josh Klane is a terrific thrower who has a slightly higher tolerance for risk. However, none of the three handlers is an elite athlete who can make plays downfield. If Minnesota’s defence has trouble punching in break opportunities against Indianapolis, it should consider moving one of its three main handlers to the D-Line to add another playmaker and help with the defensive offence.

Minnesota’s best players, other than Cousins, are initiating cutters Osgar and Bryan Vohnoutka. Both are sneakily athletic, with great noses for the disc, and great downfield throwing ability to top it off. As a team, the Wind Chill convert 53 percent of their possessions into scores instead of turnovers: an elite number, and better than Indianapolis. During the 157 points Osgar and Vohnoutka have shared on the field, their conversion rate shoots up to 60 percent. Indianapolis will need to slow those two to beat Minnesota.

However, because Minnesota lacks top-notch defenders on their offence – like Gross for the ‘Cats – they have trouble regaining the disc after a turnover. They have only just more than 40 scores on the season on possessions during which they turn the disc over, but get it back to score. Indianapolis amassed 70 such scores.

A game between individually brilliant players and a collectively brilliant system should come down to who maintains their identity. When the two teams met in early June, Minnesota led the entire game and won comfortably, 22-18. They did so despite missing their best player in Osgar and center handler in Tschida. Minnesota flustered Indianapolis into putting players in uncomfortable positions, as Gross caught seven goals but also threw four turnovers. Minnesota’s system triumphed over Indianapolis’ individual stars, who took risky shots. The 'Cats know that they need to be more patient to win.

“We have to discuss our need for more patience,” said Carpenter. “We showed that we can do that in that win we had over Madison. I know that we have the ability to do that. In order for us to play that way, we have to treat [Minnesota] like they're Madison. We have to realize that their defence is just as strong, and their defence is just as good off a turn, so we can't afford to be really aggressive with the disc, and counting on us to get it back.”

The 'Cats will need patience, but they can’t lose their identity. If Indianapolis is forced to play long points, with 70-100 passes during a possession, and cutters like Brock resetting passes through double-teams, then the 'Cats will have trouble. If Minnesota takes risky shots and attempts to match Indianapolis’ skill, athleticism, and propensity for highlights, they’ll be toast. Pace will determine this Midwest clash.