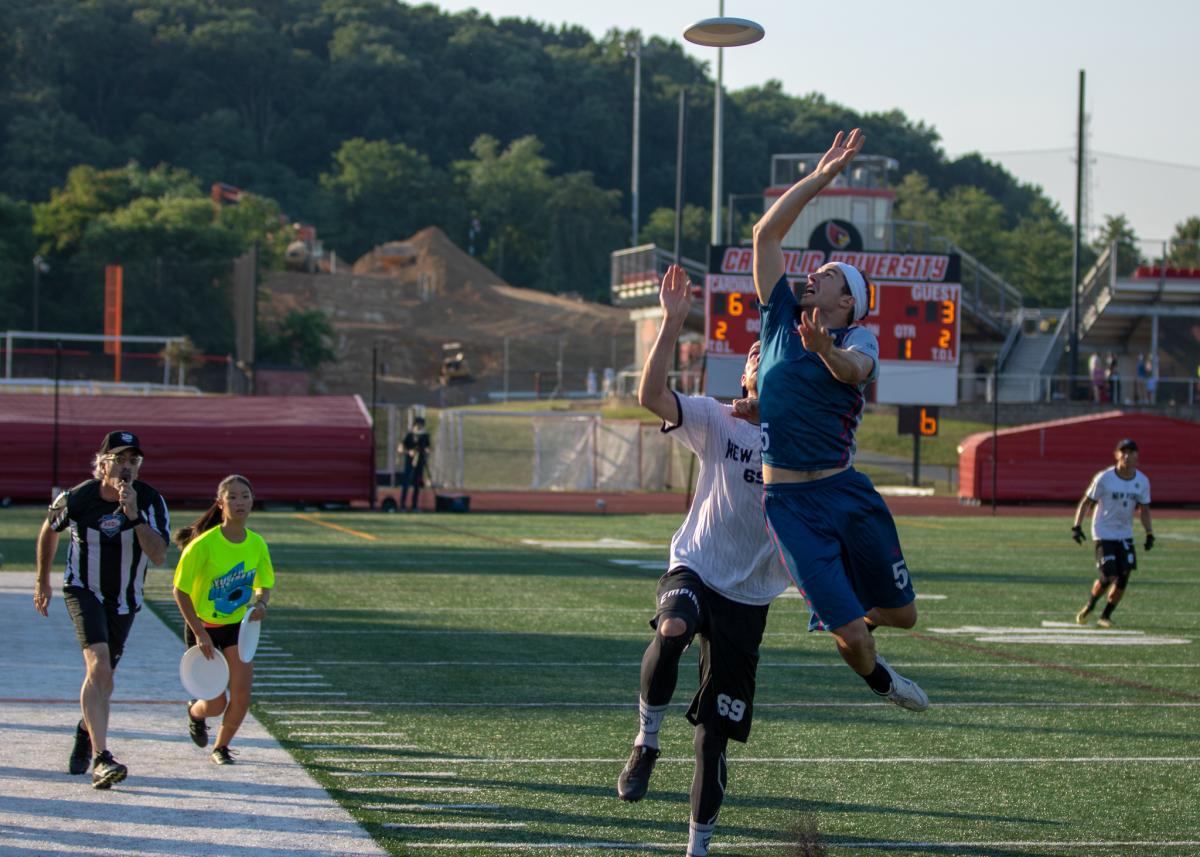 The DC Breeze and New York Empire have had divergent paths in their respective marches towards the playoffs, but both teams find themselves arriving at the same junction. The Breeze will host their divisional rivals on the evening of July 21 for the right to play the Toronto Rush for the East Division title.

Before the season began, the Breeze were considered to be in a rebuilding period, losing a handful of elite talents. It turned out Rowan McDonnell’s presence was enough to ensure the Breeze remained a playoff team. The Empire were one of the most hyped teams in the AUDL after offseason additions, including Beau Kittredge and Marques Brownlee were announced. The Empire played few games to start the season, and a short losing streak against Montreal, Toronto, Montreal dropped them out of the playoff picture; they still had plenty of time to redeem themselves. End-of-season dominance from Ben Jagt, among others, lifted the Empire back into the playoff conversation.

DC has been lifted this year by contributions from young players. A variety of second-year athletes have stepped into larger roles, fulfilling more responsibilities for the Breeze, including Ryan Swift, Eric Miner, Joe Richards, and Kyle Khalifa. All of them have dramatically improved since their rookie years. Rookie Christian Boxley has provided instant offence whenever stepping onto the field, and he only joined the Breeze for the second half of the season. Xavier Maxstadt’s addition from Pittsburgh offered a thrower who could spray the disc anywhere on the field; the Breeze have a variety of possession handlers, but Maxstadt offers a higher-risk profile in his throwing that the Breeze crave.

The supporting cast for the Breeze allows McDonnell to shine. He may not be as tall or long as other talented deep cutters, like Jagt for the Empire, but his ability to read a disc and time his jump is unparalleled. His straight-line speed is unmatched, and his ability to stretch the field deep for the Breeze provides key space for Head Coach Darryl Stanley’s offence to function.

McDonnell injured his hamstring in the middle of the year, and he adapted by becoming a pure handler. His athleticism allowed DC to reset the disc at will; with McDonnell running as a handler, the Breeze almost never turn the disc over. He is a master of every throw in the book, and it would be nice to see him bust out trick throws a little more often. McDonnell allowed the Breeze to beat the Raleigh Flyers and the Rush at home already this season, scoring 10 goals against Raleigh and 10 assists against Toronto.

The Empire don’t have any such high-profile victories to their name this season, and they only won their first road game at the end of June. That’s partially because their schedule was so backloaded, but also because the Empire weren’t playing well for three-quarters of the season. Their players weren’t running the offence, and yet they still managed to qualify for the playoffs ahead of a loaded Montreal Royal squad.

The Empire are a star-studded team. They boast deep cutters as heralded as any in the AUDL in Kittrege and Jagt, and Jeff Babbitt is one of the world’s best defenders. Harper Garvey has range equal to any player in the league, particularly on his hammer.

Yet the Empire’s role players have been their most important on the season. The unheralded hybrid Ben Katz is second on the team in plus-minus. He was one of the Empire’s lone bright spots in their July 14 loss to the Breeze, finishing with 6 assists and 4 goals. The player who arguably most affects the fluidity of the Empire’s offence is not Kittredge or Garvey but instead the ever-cutting Matt Stevens. The Empire offence scores on 64 percent of its points; that number increases to 73 percent when Stevens is on the field, a larger increase than that wrought by any other Empire player who sees significant minutes. The team’s ability to maintain possession similarly increases with Stevens’ presence, shooting from a 51 percent conversion rate to 59 percent with Stevens on the field.

The Empire can’t – and shouldn’t – rely exclusively on their stars. None are capable of dominating a game single-handedly, except perhaps Jagt, whose throws have improved dramatically this season. Defences must respect Jagt’s size and athleticism, backing him by enough yards to take away his deep cuts. His ability to easily receive unders and spray the disc anywhere on the field has saved the Empire in a variety of games. If the Breeze’s top defenders, like Delrico Johnson, manage to shut down Jagt in single-coverage, the Empire will need to rely on its role players like Katz and Steven to keep the offence moving forward.

In a game populated by some of ultimate's brightest stars in McDonnell, Kittredge, and Babbitt, the final result will paradoxically be decided by both teams’ cogs. A wheel can’t roll without its spokes holding the weight, and neither team will survive on star-power alone. Will the Breeze’s young supporting cast continue its strong play under the bright playoff lights? Will New York’s secondary playmakers in Josh Alorro and Jibran Mieser play as consistently as New York requires? Both teams’ stars will have to play up to their lofty expectations, but they will require support to carry the day.