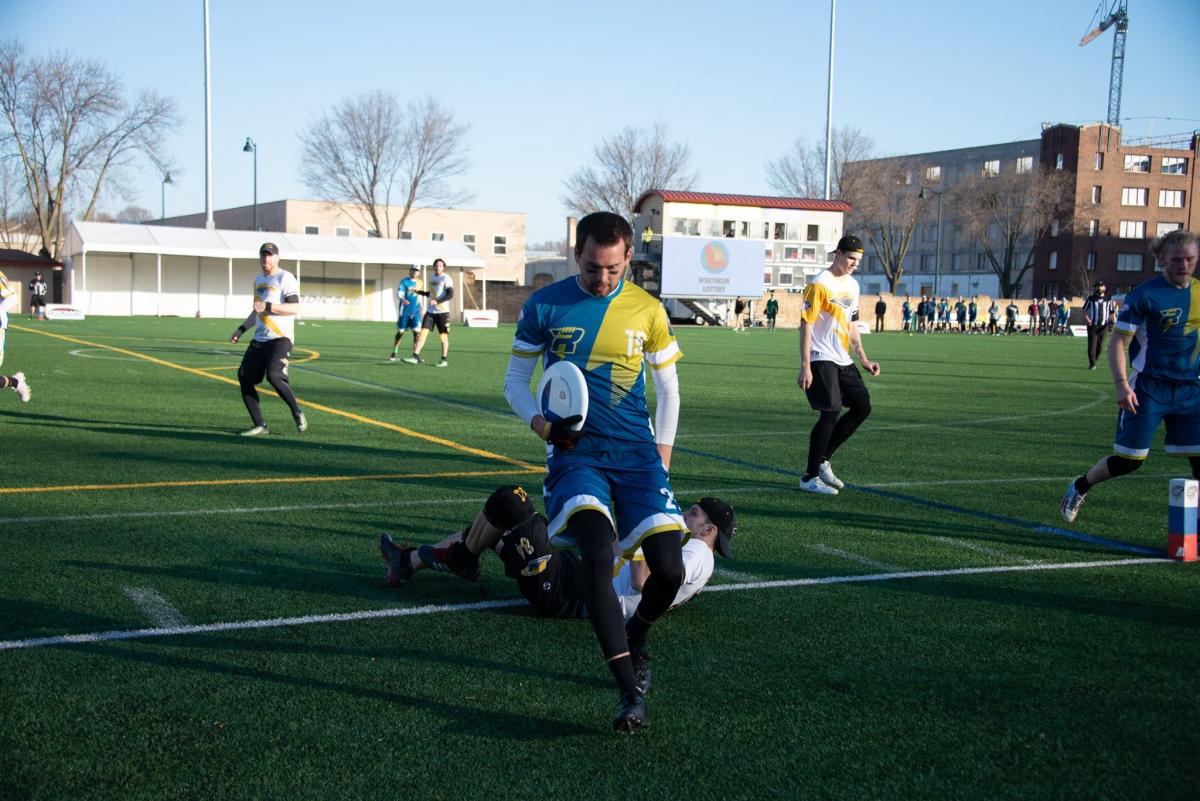 Peter Graffy wasn’t always sold on ultimate. The Madison Radicals defensive star and AUDL single season blocks record holder got his introduction to the sport came when he was a sophomore in high school, and even later at Luther College, Graffy considered himself a soccer player first and an ultimate player recreationally. But a single game against Luther’s regional collegiate rivals from Wisconsin hooked Graffy.

“It was regionals at college, and we were playing the Hodags. I ended up scoring nine goals that game and threw two assists or something,” Graffy explained. “It was super fun. I went deep a bunch, and they didn't really have an answer for me, so I was like, oh, so this is something I can do, I guess.”

By 2011, Graffy was playing for Madison Club. And after a journey in South America, he returned to play for the Madison Radicals in 2014. Despite Graffy’s newcomer status, Head Coach Tim DeByl immediately placed him as the deep-deep in Madison’s zone defense. Graffy learned the position quickly, as he drew on his soccer knowledge for direction in reading cutting lanes.

“I was a sweeper. I was a center back in soccer,” said Graffy of his background as a defender. “That's really the position where you're the field general, it's the exact same as a deep in a zone. You're looking at each side of the field, you're moving pieces around to plug in other players, to make sure that everything gets covered. It's just similar. It's almost exactly the same. I'd been doing that for so long that, it was just something that worked really well for me.”

Graffy sees the zone uniquely. From another viewer’s perspective, a zone can look like a complicated traffic intersection. To Graffy, a zone defense is an invisible bear trap waiting to be sprung. And he gets to set the trap during each point.

Where we see players, Graffy looks between them, eyeing lanes through which the disc can travel. He helps maneuver his teammates into the correct positions, calling out commands to close any gaps before a thrower can recognize them. He slowly closes the vice on the opposing team until the only remaining options are to throw through the monstrous double-team set by Andrew Meshnick and Matt Weber, 13-odd feet of swiping arms, or to test Graffy himself, lurking deep.

Graffy treats the field like a chessboard, with each move dictating a counter. The signal to spring the trap is when a cutter or imperfect handler receives the disc on the sideline.

“What I'm trying to do, is essentially to close off gaps in the middle by talking to Logan [Pruess] and Nate [Bosscher] and the outsides,” explained Graffy. “To force the opposing team to the outsides, to the wings, and then try to have our cup clamp down on them and set that big double team.”

When Graffy senses an impending offensive mistake, he directs the middle wall to no longer take away upfield throws, but instead to take away the short, easy passes. The cup of Meshnick and Weber will shift to take away dumps or resets. That leaves the thrower either to try to break the cup with a difficult reset pass or to try to air out a huck into Graffy’s domain. Graffy rarely loses those battles.

Graffy uses his awareness to defend the deep space, never letting an offensive cutter between himself and the endzone. His middle defenders lurk in throwing lanes, so that a thrower should never have an angle to release a flat huck. Graffy swallows looping, floating hucks, which often hang long enough for a second defender to come help out. Coach DeByl credits Graffy’s talent in defending deep space to his terrific timing. He’s used his length, vertical, and timing to collect blocks on the world’s most threatening deep threats, including Beau Kittredge, Marcelo Sanchez, Mischa Freystaetter, and others.

After Graffy has positioned his team’s defense, and then his own body, to collect a block, he’s an integral piece in Madison’s defensive line’s offense. While Graffy began his career as a monster deep threat, he last year became a main handler for Madison: a testament to his work ethic.

“I don't think we have a player who has worked harder on his game than Peter,” DeByl praised Graffy. “Peter was very much a cutter four years ago. I would say, last year, he might have been the best thrower or close to it on the team. He has put the hours in to refine his game, and it's impressive.”

2018 has seen Graffy return to the fringes of his line’s attack. A number of young players have popped for Madison, their increased comfort with the disc corresponding logically with more offensive responsibility. With the extra skill surrounding Graffy on Madison, a different player might fight to retain his status or his stats.

Graffy couldn’t be happier that his teammates do more while he is asked to do less.

“Vic Luo, he's a young guy, he's coming up and starting to do pretty well. [Josh Wilson] is playing a lot. Nate Bosscher, he's new to the team this year, but he's obviously a very good thrower, good player. Kyle Weigand, Chase Marty, all those guys have gotten better over the past couple of years,” said Graffy, describing his teammates who shoulder more offensive burdens. “It just means that I don't have to do as much. We're more of an even team. We're a more balanced team, and that's exactly what I want to play on.”

“The fun comes from people getting better,” he further explained.

For DeByl, having a force like Graffy in his pocket is important. Every play Luo or Marty make during the regular season is an extra play in the playoffs during which Graffy can fully exert himself.

“I know that people only have so many points in them in a season to play at a super high level,” said DeByl.

When Madison has lost playoff games in the past, either to San Francisco, Toronto, or other star teams, it’s been because their faceless army has stalled out in the face of superior superstar talent. Every regular season assist thrown by teammates provides an extra ounce of energy, an extra burst, to the stars like Graffy come playoff-time.

He’ll need every drop of skill and drive in the playoffs, when superior defenses grind down Madison’s egalitarian, patient offense. That’s when Graffy will re-emerge from the supporting cast and again dominate points and opponents alike. Until then, Graffy derives his joy from choreographing his teammates, shifting them left and right, forward and back, positioning them for success. It's worked well in 2018, as Madison defense is allowing a league-low 13 goals per game on their way to a 5-0 start. If that mark stays, the Radicals will set a single season record for least goals allowed.

“Preparing for this year is, if I help get Chase Marty to where he is very comfortable and confident with the disc, Sterling [Knoche], all those guys. If I help work with those guys and make them better in practice and in games, then the championship takes care of itself,” said Graffy.

Even if Madison finally wins a championship, even if his teammates soon surpass him, Graffy doesn’t plan on quitting anytime soon.

“I'll probably keep playing as long as my knees will work, and as long as my body stays together,” he predicted, continuing while laughing, “pretty soon I don't know where I'm gonna go. I'll be an O-Line handler. I'll be the new Andrew Brown, because there'll be nothing left for me.”