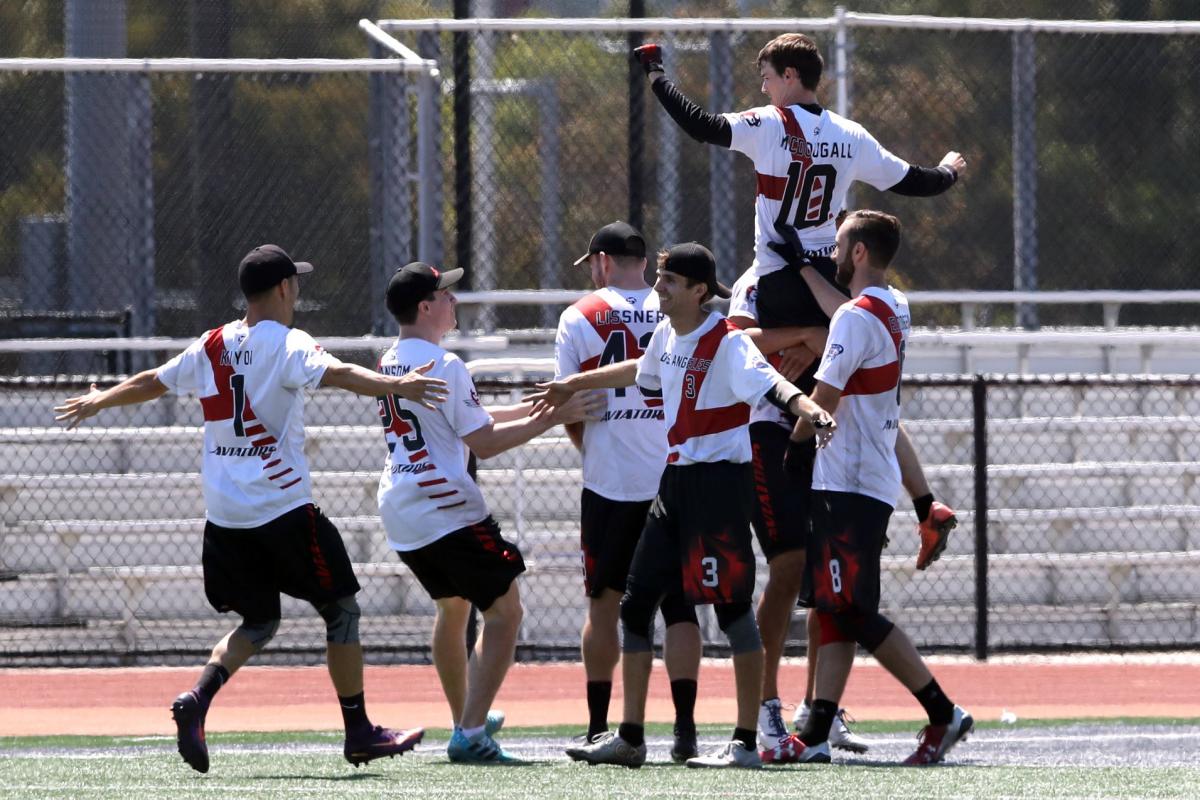 Since the advent of the West Division in 2014, either the San Jose Spiders or San Francisco FlameThrowers have represented the division at Championship Weekend every season but one. This year, though, the Los Angeles Aviators put another dent in the Bay Area dominance of the West, winning 11 of their 12 matchups against divisional opponents. The Aviators don’t have the same historical pedigree as their final four peers—Los Angeles is the only team making its first Championship Weekend appearance in 2018—but they’ve been diligently laying the groundwork for this moment since the franchise’s inception four seasons ago.

“I don't really want to be a team that brings in a bunch of superstars, wins the championship, and then everyone moves away,” said Aviators Captain Mark Elbogen. “It's more building a foundation, and a lasting LA frisbee legacy. It's more important. We're on the right track for that, and continuing to get better each year, and getting LA onto the national frisbee map has been our goal.”

Despite Los Angeles being a global city center of culture and sports, the ultimate frisbee community has always fallen short of the expectations its talent pool projects.

“The Los Angeles area has been known for being a mediocre frisbee area, I'll say that,” said Elbogen. “For some reason, it was really hard to maintain talent in the LA area.”

With little to tether player talent to the city, the Aviators built their franchise into not just a team, but a program set on establishing continuity. Each season, the Aviators have added a handful of players to a strong existing core that includes Sean McDougall, Zach Theodore, Eric Lissner, and “Mr. Aviator” himself, Elbogen.

“[Elbogen] was literally the first guy [who signed], and he reached out to us,” said Aviators owner James Park, who inked Elbogen in 2015. “That was huge for us, because he had just been a part of a championship team.

Though not the main receiving target, Elbogen had a prolific first season in the AUDL with the San Jose Spiders. He caught 31 goals and dished 14 assists in eight regular season games, before exploding during the 2014 postseason, catching 15 goals in just three games as the Spiders took home the hardware.

“He wasn't necessarily the number one guy in San Jose, but with his age and experience, it was just a perfect fit for us,” Park said. 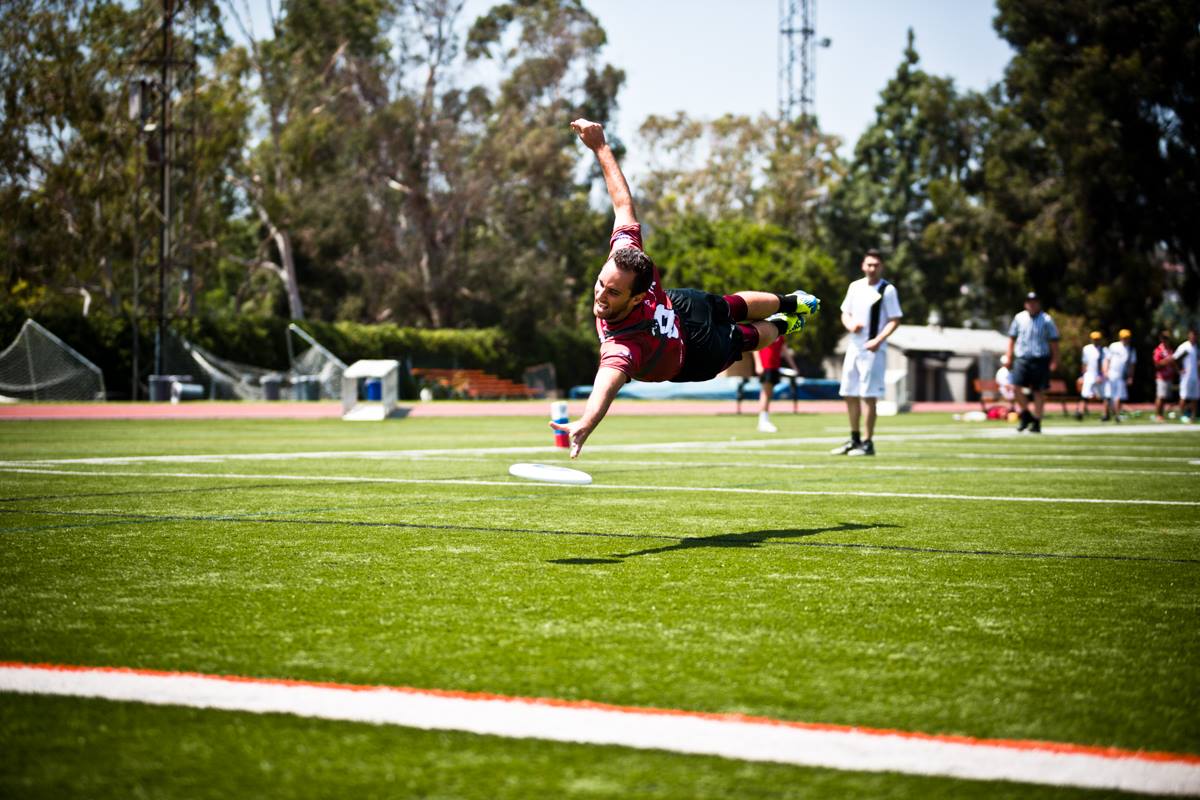 “That guy, talk about the guy that acts like he's been there before. He's it. He's the consummate professional, in every way.”

2016 saw the addition of explosive offensive cutter Brent George, handler defender Andrew Padula, and center handler Tim Beatty, the last of whom was cut from the Aviators in 2015. Eli Friedman joined the team. His presence foreshadowed the addition of another superstar.

As reported at the time by Evan Lepler, Friedman’s connection to the Aviators was wrought through incredible circumstances. Park received a late night call from a friend living in Washington D.C., who was invited to a pizza party. Park’s friend discovered the party was hosted by an ultimate player who had won some college award – a Callahan – and was soon to move to Los Angeles. The friend thought Park may want to speak to him.

In 2017 Friedman’s close friend Tom Doi joined the Aviators from the DC Breeze. Defender Ted Barnett joined Los Angeles after winning an AUDL championship with the Dallas Roughnecks the year prior.

Doi’s meeting with Park was similarly serendipitous. He was traveling along the entire west coast, staying in every city for a week, to choose where he would live. Park found out and scheduled a meeting. Doi asked Park to choose somewhere to meet, and Park settled upon a small, trendy café. 20 minutes into their conversation, Park discovered that Doi had not only been to the café before, but his sister even owned it.

Some of the team’s best talents didn’t arrive until 2018. Chris Mazur brought his championship pedigree from Dallas. Roadrunner Jesse Cohen zipped down the road from San Diego. Both are now dangerous weapons on Los Angeles’ O-Line.

All in all, though Los Angeles has only won one miserly playoff game before this season, its players have a wealth of experience. The Santa Barbara crew of Tyler Bacon, Jeff Silverman, Michael Kiyoi, and Elbogen have won AUDL championships in San Jose, and Mazur and Barnett won AUDL championships in Dallas. Doi and Friedman have won practically everything worth winning outside of the AUDL. The team has as much experience winning high-profile games as any in the AUDL.

Along with the influx of players, the team’s fortunes have slowly improved every year. The 2015 Aviators finished with a 5-9 record, missing the playoffs entirely. The team flipped the script in 2016, finishing 9-5 in the regular season before losing to the Seattle Cascades, who eventually fell in the finals to the Roughnecks. In 2017, the Aviators actually finished 8-6, but they won their first ever playoff game, hammering San Jose 33-24 before falling to the eventual champion San Francisco. This year, the Aviators have reached Championship Weekend.

It’s been an eerily consistent march forward for the Aviators, who have progressed at an even rate every year. Los Angeles has built the exact club Elbogen wanted. Though the roster has its fair number of stars, they are on the team to stay. The process has been slow, but Los Angeles is now a model of long term success.

In discussing the growth of the club, few on the team attribute it to the trickle of talent onto the roster. Instead, they discuss organizational growth. Every year, the team improves its communication, better defining its expectation of players. The team has gotten better at requiring – and providing means for – film work from its players. The Aviators have added pod workouts; Los Angeles is too big and traffic-filled for the entire team to meet for practices, so instead players meet in smaller, localized groups for workouts, practices, and disc drills. Most of all, the core of the team has been the same since 2015.

The team has its sights set further than a token appearance on the AUDL’s highest stage, but they aren’t defining success by such obvious margins. Success, to the Aviators, was realized this season long before the team began its march.

“The game that we go and play on Saturdays and Sundays should always be a celebration of all the hard work that we do leading up to that,” said Park.

“I don't think success is something that I determine by if we win or lose,” confirmed McDougall. “Did we build this team? Did we build a community within this team, to help succeed down the road?”

“I think building a successful program is our definition of success,” agreed Elbogen. “Going to the playoffs, and championship weekend, is obviously a goal, and everyone wants that, and wants to do that, but I think just building a lasting L.A Frisbee program is kind of what I define as success for the program and the league.”