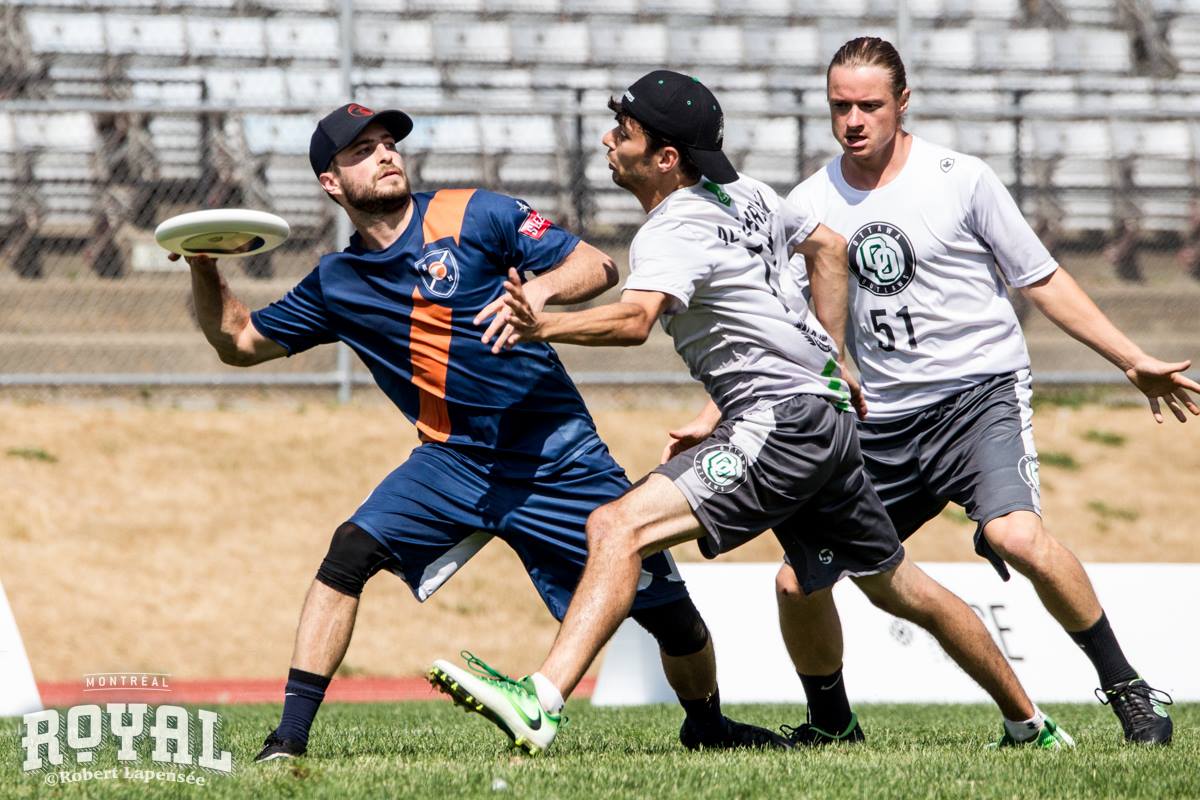 The Montreal Royal have run a very successful organization in their first five seasons in the AUDL. The Royal can afford to bring in players from outside the immediate Montreal landscape, and they’ve taken advantage. Kevin Quinlan was the first player import in 2016, and just last season, their non-Montreal contingent included Quentin Bonnaud and Stève Bonneau from France, Morgan Hibbert and Cam Burden from English-speaking, western Canada, and Estéban Ceballos from Columbia. Because the Quinlan experiment has succeeded since he arrived in Montreal, the team has decided to frame much of its culture and identity around a mixture of local and out-of-market talent.

It wasn’t always easy for Quinlan, but both him and the team learned how to make it work.

“I was bounced around in a couple of players', or coaches', houses for a while,” said Quinlan. “The language that was spoken on the team was French-based, and all the drills and stuff were in French, and it was a little difficult for me to understand and make friends, and to be who I was, because I couldn't get in on the inside jokes." 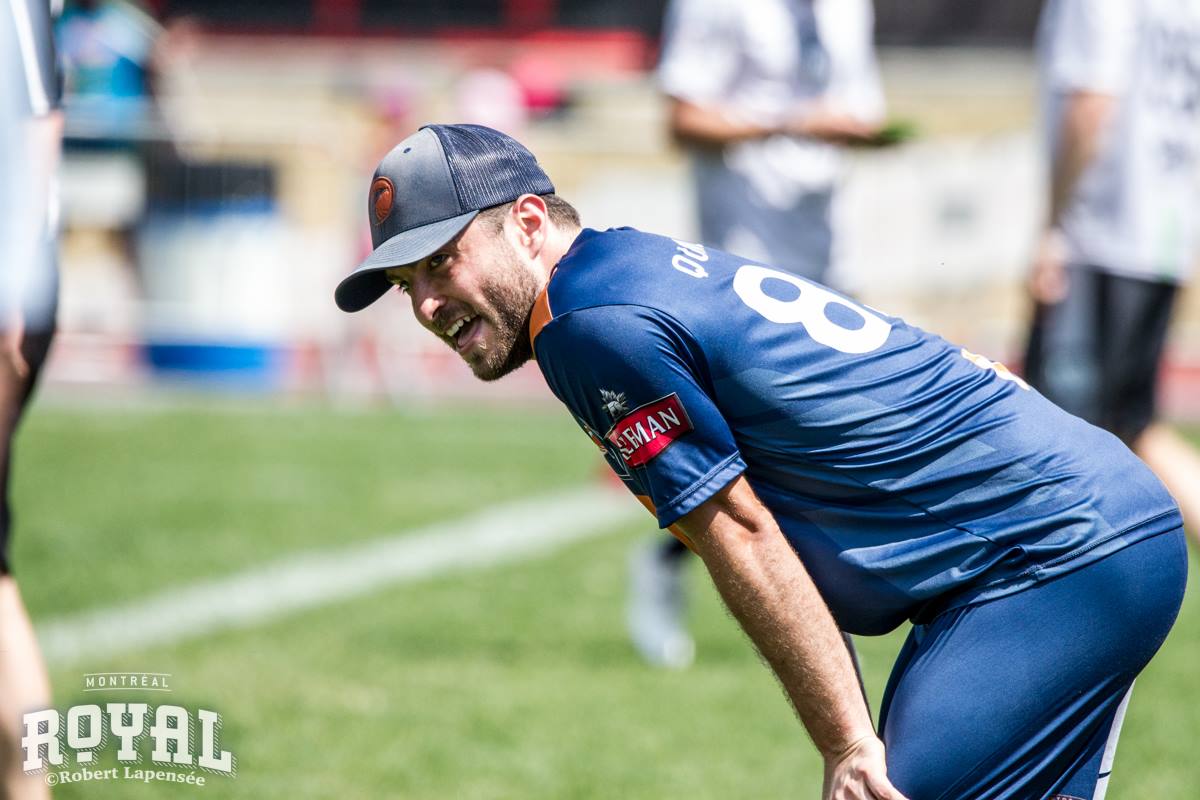 “It took awhile for people to warm up. Once we got past that, it got better.”

The answers to Quinlan’s struggles in adaptation have provided a blueprint for how Montreal would integrate foreign imports. Now, the team’s primary on-field language is English. Even when players slip into French occasionally, some Montreal locals always translate for those who don’t speak it. Players are housed with teammates, and Quinlan himself even boarded Burden last year in his first Royal season.

“I was also a part of [learning how to get] the professional athlete permit that everyone's going to need,” Quinlan continued. “They also learned about where we're going to keep people, how this is going to work. Being the guinea pig was a little bit difficult, but I think it's allowed the Royal to have a good strategy moving forward.” 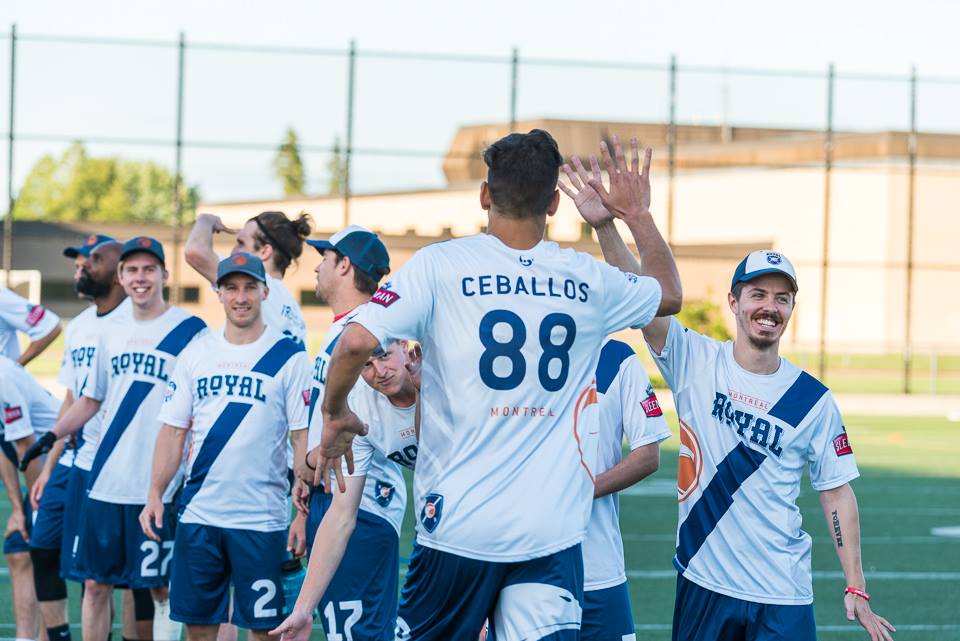 The integration has worked to varying degrees for the Royal. Quinlan thrived in his first season in Montreal in 2016, setting a then-record for scores in a game while garnering Second Team All-AUDL honors, but the team missed the playoffs. The following year, the Royal qualified for the playoffs in 2017 behind monster seasons from the French connection of Bonnaud and Bonneau. Quinlan was allowed to blend into the fabric of the offense, using his deadly hammer and flick hucks as the second or third options rather than being the focal point for playmaking. The season ended in a disappointing first round playoff loss to the DC Breeze, but Montreal still felt momentum heading into the offseason.

In 2018, the Royal struggled by their own standards. Imported players, including Hibbert, admitted that they had trouble fitting into the team structure at times. Quinlan was injured on-and-off throughout the season, and ended up missing four games. Montreal struggled to a 6-8 record and missed the playoffs despite believing they were equally talented to the three teams that qualified for the East Division playoffs, the Toronto Rush, New York Empire, and Breeze. 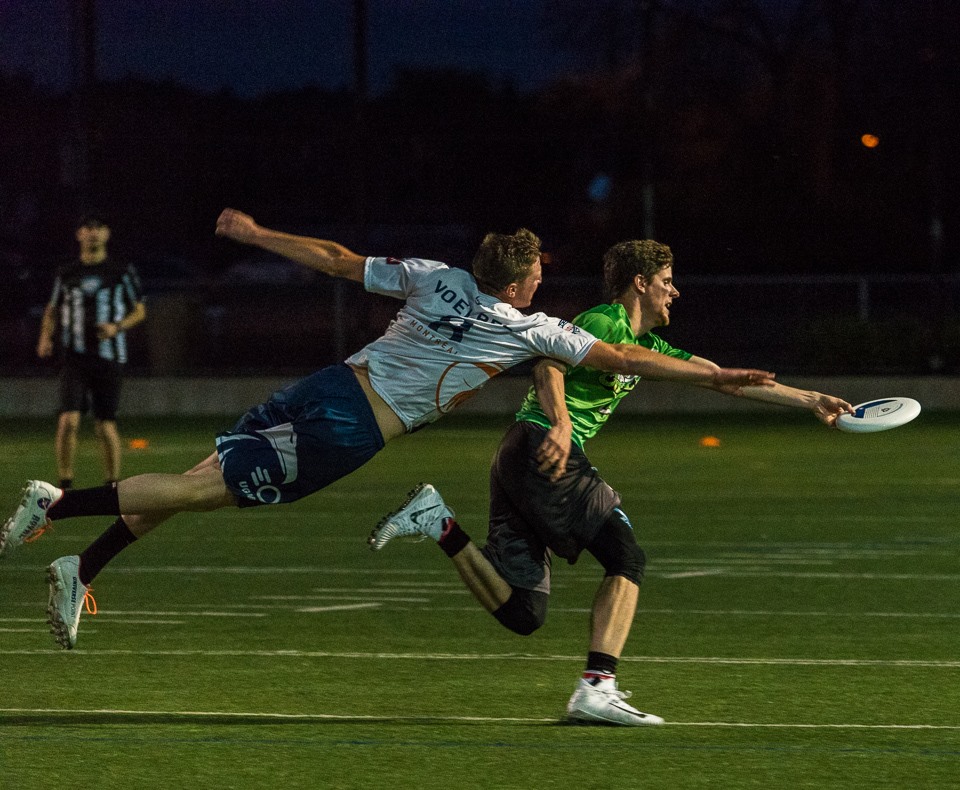 There were bright spots for Montreal in 2018, though. When Quinlan led the team in assists, Montreal finished 3-2. He threw eight assists in a dramatic 26-22 June victory over the Empire; even when he’s not the center handler, his arm is still integral in deciding the Royal’s fate. The team is hoping that if they focus more on chemistry in the upcoming season, they already have enough talent on the roster to compete with the division’s top teams.

“Not that we have an ego problem,” Quinlan said with some hesitation. “But we do sometimes.”

“It's strange. We are a talented team, but we just lack that consistency. We took a look at it, and we just said, let's bring up character guys. Maybe they're not as talented, but at least they'll be good teammates and help drive what we are.”

To help address that, the Royal will actually have fewer foreign imports next year. Quinlan alongside Bonnaud, Bonneau, and Ceballos will remain, but there are no real certainties beyond them. Instead, Montreal will turn inwards, focusing on development from their young Quebec contingent that has produced upcomers like Miguel Goderre, André Arsenault, Francis Vallée, Malik Auger-Semmar, and Vincent Lemieux. 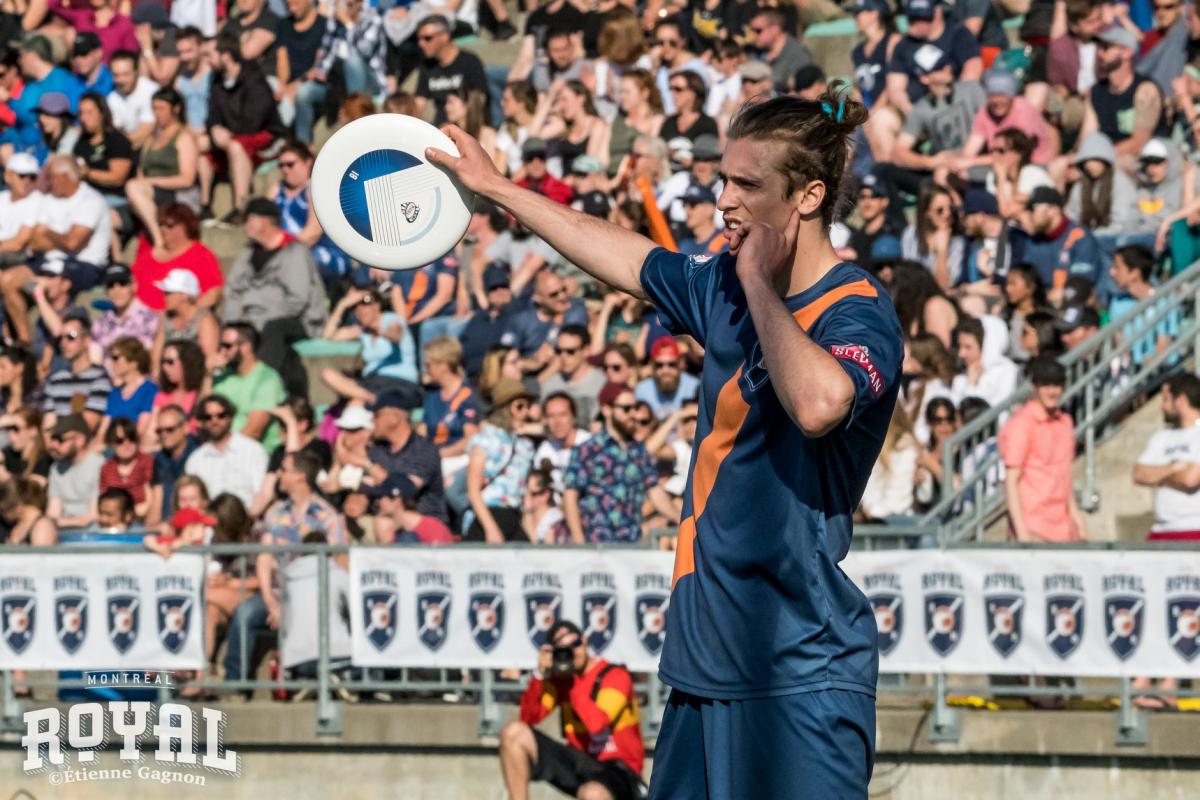 To that end, Quinlan now counts as one of the locals. And he’s excited about the new crop.

“I am really excited for Vincent Lemieux. He was more of a role player on D-Line last year but has worked hard and is really solidifying his spot as a dominant player on offense,” said Quinlan. “André is a dominant player with an incredible motor. Great size, speed and willingness to improve.”

As a captain last year, it fell under Quinlan’s duties to ensure that Montreal’s collection of players formed into a team. Now, Quinlan focuses much less on his statistics. His leadership extends beyond throwing the most assists for the team. 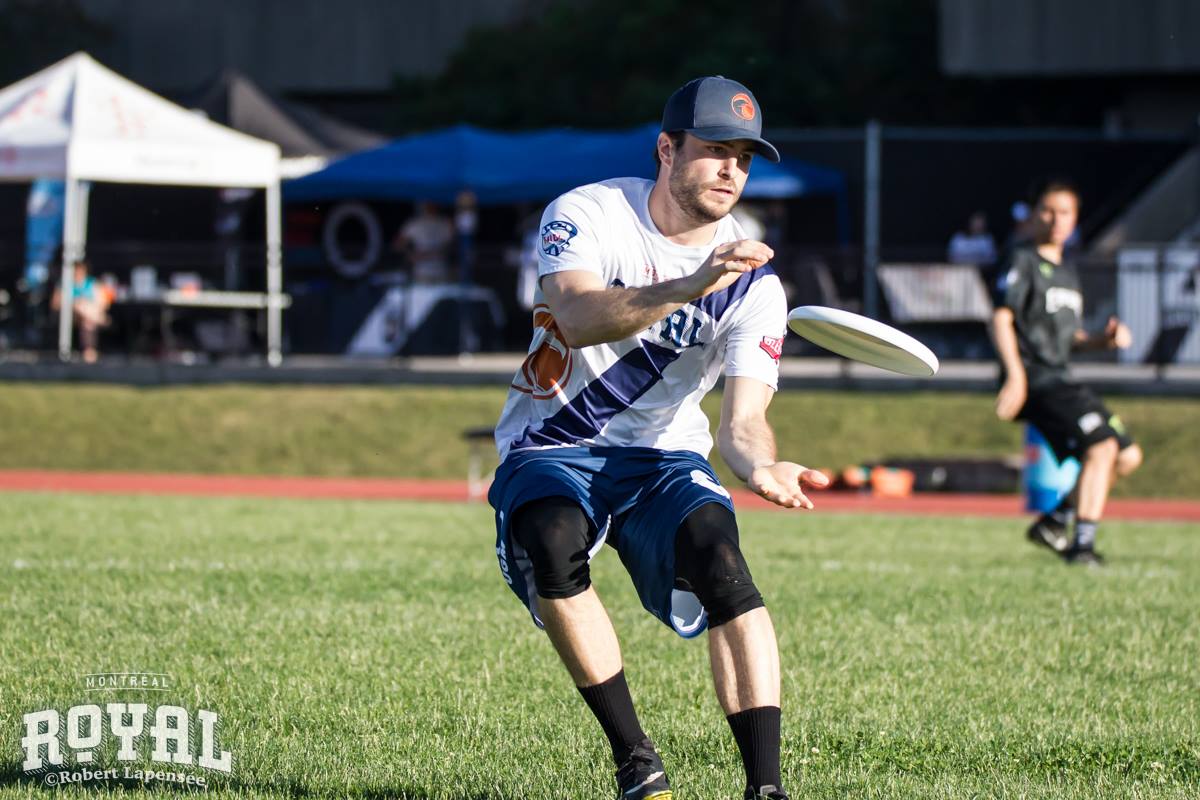 It’s now Quinlan’s duty to bring his younger teammates up to his and the team’s lofty expectations. For Montreal to succeed in 2019, they will need huge contributions from across the roster the competitive East. Quinlan still has one of the deadliest arms in the AUDL, but the Royal reaching the 2019 playoffs will depend on Quinlan’s leadership off the field as much as his success on it.