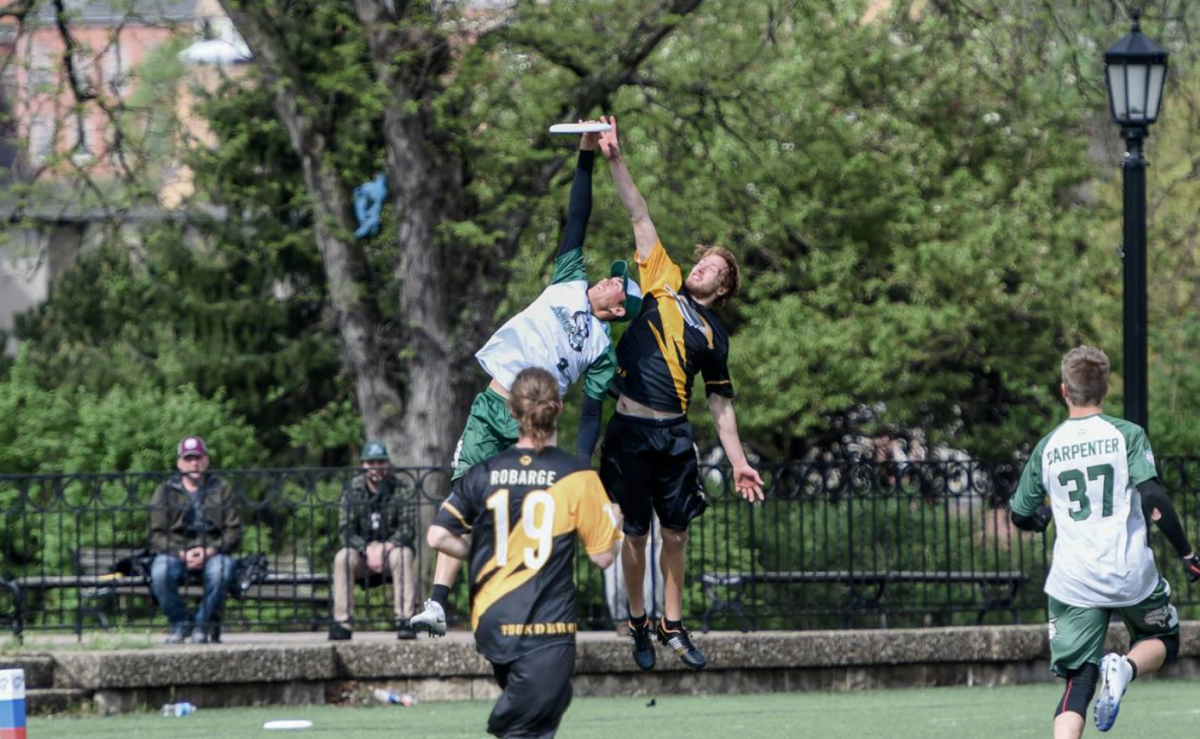 Last season almost broke the Indianapolis AlleyCats. The team finished 5-9 – with a positive overall point differential – and missed the playoffs by a wide margin. The AlleyCats have been in the AUDL since the league’s inception in 2012, and many of the players have been on the team for its duration. 2017 was the third season in the row in which the Cats had missed the playoffs, and an unspoken thought had occurred separately to several players: 2018 was the last chance to fix what was wrong with the team, or there would be large roster turnover.

“It is very draining trying to get the same group of guys [to win], because it feels like the same problems come up over and over, and you feel like you've addressed them, but it just happens all over again, and it's hard to understand why,” said Captain Travis Carpenter.

Carpenter himself admitted to quitting on the 2017 season.

“I allowed it to get to me, to the point where I kind of gave up early on the season,” Carpenter admitted. “My teammates took notice, too, that I was fairly withdrawn from the team. I was very lackadaisical. I was getting angry a lot faster, and impatient with teammates.”

Change would have to start from the top down, and Carpenter, fellow captain Keenan Plew, Head Coach Eric Leonard, and team owner Tim Held met for long hours to discuss what ailed the franchise. Carpenter remembers bringing pages of notes. Perhaps a shock to all involved, the suggested changes were embraced team-wide with almost no reservations.

Everyone on the team was honest and open. Carpenter apologized for his behavior in 2017. Plew explained his intense, occasionally bordering on abrasive, leadership style. Such vulnerability from the team’s most important leaders engendered a complete buy-in from the top of the roster all the way down.

The team refocused on player commitment. Leonard stressed that the AlleyCats are the most important priority for its players; all other ultimate commitments are secondary. Accountability is another pillar, and Leonard has embraced more strict in addressing players for their lapses, despite his laid-back nature.

“If they're late, we run. If they make a joke inappropriately or throw the disc the wrong way, we run. That sort of stuff,” explained Leonard. “We do a lot of hundred yards down, hundred yards back. I'll get creative every now and then, make them do something slightly embarrassing in front of the team, or single a guy out for something silly.”

So far in 2018, they have only one blemish on their record. The ‘Cats have beaten all six opponents against whom they’ve been favoured, and all by large margins. The only glitch has been a loss to the Madison Radicals in which a disastrous second quarter doomed the squad. Though the conditions were so cold and windy that Carpenter couldn’t feel his hands without wearing gardening gloves, the team knows that their performance against Madison wasn’t acceptable. The team can’t prove that the Madison game was less telling of their status than their other six games until they face Madison again on June 17 in Indianapolis.

“We want to keep proving that the AlleyCats who are winning by 9 or 10 goals, we want to prove that that's who the AlleyCats are,” said Cameron Brock, who leads the team with 33 goals through seven games, and is ninth in the AUDL at 4.7 goals per contest.

The next month of competition will determine the AlleyCats’ path. They will face the Chicago Wildfire, Minnesota Wind Chill, and then Madison, the three teams favored to be in the Midwest playoffs when the season began. Indy will likely need to win at least one of those three games if they want to have a chance at ending their playoff drought.

Another, perhaps more important, test for the team came in the form of a flagrant foul delivered by Plew to a Detroit Mechanix defender on May 5. How would the team’s focus on accountability survive such a blatant eruption of emotion?

“We had a meeting. We discussed it,” said Leonard. “The primary focus was that play was unacceptable, and there's no other way to look at it. Keenan's a veteran. He's been in the league since its inception, and he should know better, and I think he does.”

The test will be ongoing throughout the rest of the season. Even if everyone who competes at high levels can be accused of occasional mistakes in the heat of competition, emotions must be regulated. Only good sportsmanship – without blips – can ensure that lessons are learned, just as only ongoing commitment and accountability can ensure that the team’s culture has shifted. So far so good, but none of these exams can be passed in a matter of weeks.

How specifically have broad pillars such as commitment and accountability manifested themselves into a blazing 6-1 start for Indianapolis? Most importantly, the offense has been clicking, as Leonard decided to throw all of his team’s superstars on the starting O-Line. Even former defensive wizzes like Carpenter and Rick Gross are now tearing up opponents on the other side of the field.

“The offensive conversion rate is very high,” Leonard said, explaining his team’s success. “That's loosening the pressure on the defense; we don't have to get so many breaks in the game to win.”

The defense has played its part well. Though the team’s most well-known names all play on the offense, the defense is certainly not without talent. Players like Jon Wenger and Nick Hutton have provided huge boosts. A number of second-year players, like Wenger, have made huge leaps in field awareness and comfort.

“While a lot of people might say that our quote-on-quote superstars are all on offense, I think the players that are on defense have all raised their level of play so the bottom end of our roster is just much stronger now than it was at this time last year,” said Brock. “Everyone starts out as a nobody. These guys could be household names within the next couple of years.”

As the defense has improved, the offense has faced stiffer competition in every practice. A rising tide has lifted every player’s boat, thus far.

Chemistry is similarly at an all-time high. Everyone knows their roles, and unlike in other seasons, no one has yet tried to play beyond them. The captains are in charge of the team’s emotions, while the coach is in charge of the gameplan.

“It is nice to have those guys come into the huddle and fire us up, because I'm not the best cheerleader,” admitted Leonard, laughing.

Another important contributor to the team’s emotional well-being is youngster Levi Jacobs.

Jacobs will do anything to ensure the team is happy, including dancing, shouting, or jumping. He’s the emotional glue-guy that every team needs, but it sure doesn’t hurt that he’s a dynamo talent, to boot.

Newcomer Keegan North is a huge addition to the offense, and his high-difficulty throws, such as his upline forehand blade, have brought a necessary dose of unpredictability. He’s helped greatly off the field, as he is one of only a few players with Worlds experience. Though he’s incredibly reserved, his insight has helped diversify an offense that has remained the same for more than a year. He is able to offer little additions, such as codifying in which direction a player cuts from each position in the stack, or directing handlers to crash the cup when the thrower is double-teamed. Those small boosts diversify the team’s look and will help in the long run.

Everything is clicking. Indianapolis doesn’t feel as disrespected as their Twitter account may pretend; everyone with whom I spoke affirmed that respect must be earned, and they haven’t done much in the past three years to warrant any national attention. This season may change that.

Every time the 'Cats offense scores on a clean hold, the team’s narrative is changing. However, the players themselves aren’t concerned with outside perspectives. Most importantly, the players feel like this season is an entirely new one, unbound by the failures of the past. The culture shift would be considered a success even if the only result would be that players care more about the team. That the Cats are 6-1 is the largest, sweetest cherry the 'Cats could imagine. Indianapolis is proving that what didn’t break them made them stronger, and now they’re turning their sights outward, excited to break Madison’s eternal hold on the Midwest Division.