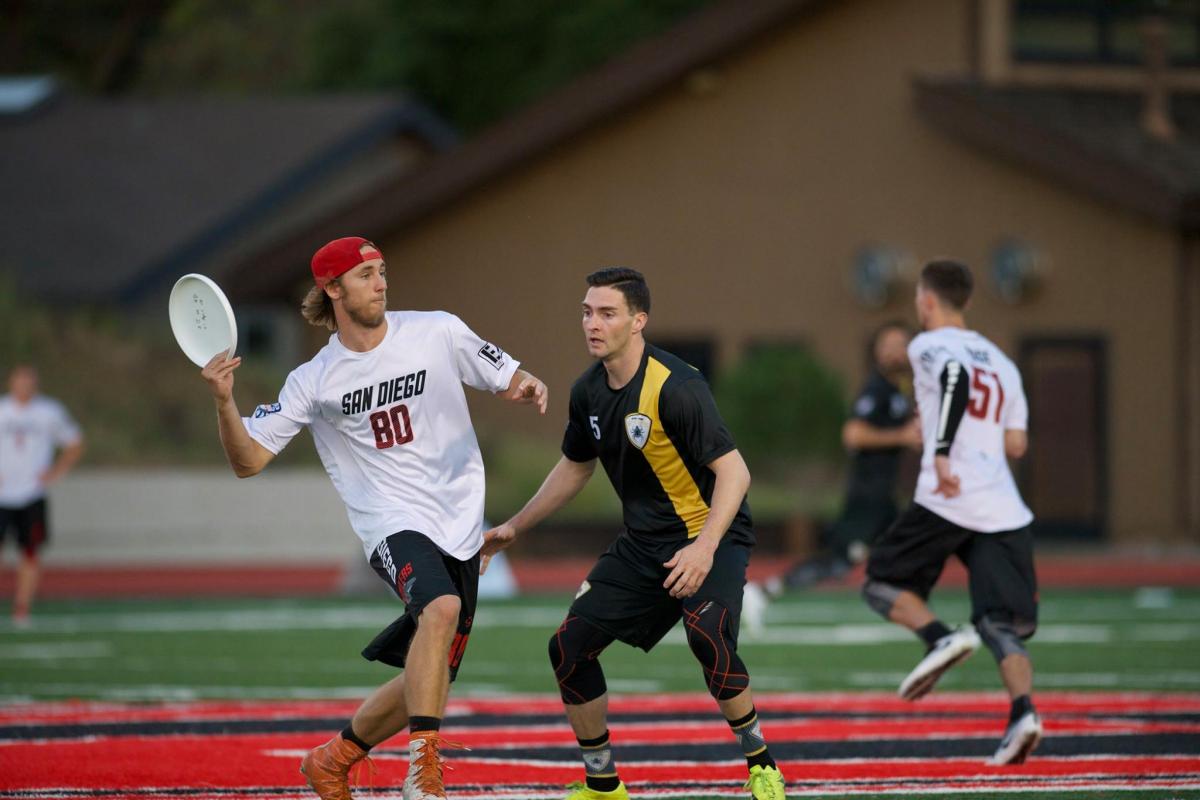 After beginning the season by getting massacred by their Los Angeles rivals, the San Diego Growlers are now 2-1 and in first place in the West Division following a pair of close victories over the Seattle Cascades, including a 26-25 nail-biter this past weekend. There is no player more responsible for their success this past weekend than Travis Dunn. Let’s investigate just how dominant he was through a film breakdown.

Dunn wasn’t able to play in his team’s first two games, although he has attended every practice and even joined the team’s leadership as a captain for the 2018 season. Despite being frustrated about missing the games, Dunn redeemed himself in his debut. Dunn plays a unique role on San Diego, but one common to every AUDL team. He is an initiation cutter, who often looks to get discs under and make plays from power position. With his size, at 6’2, Dunn is devastating while cutting deep. He is surprisingly quick, and when he has steps on a defender, he’s a terror downfield.

Even surrounded by bodies, Dunn is strong enough to still get a good jump. He can be trusted to bring down discs in a pile.

Coach Kevin Stuart described Dunn as the guy who “will always win those 50/50 balls.”

Defenders naturally give such a threatening cutter space under. Unfortunately for defenders, Dunn is perhaps most comfortable receiving the disc under and making plays. Coming from Arizona, Dunn was quite comfortable making plays in tight spaces.

“[At University], he was always coming under, getting the disc, facilitating back to the handlers, but was able to break the mark, really good disc skills, really good throw-and-go. [He was] kinda like a basketball player that grows into his height,” explained Stuart.

Dunn’s throw-and-go skills were on full display against Seattle. Here he shows his quick decision-making, quick first step, and smooth throwing ability all in one assist:

Here he toys with the defense on a give-go sequence all the way down the field. When that option stalls out, instead of forcing anything or lurking in the cutting space, Dunn intuitively returns to the stack before jittering into the open space for an easy goal.

Even if Dunn isn’t making the killer play, resulting in either an assist or a goal, he is incredible as the connecting link between throwers and downfield cutters. He can cut under, gain 10-15 yards, dump to the handler, and immediately cut again to gain some more. San Diego runs a spread offense that allows acres of cutting space for their weapons. Dunn is terrific at timing his cuts, aggressively using space to ensure he is isolated in single coverage. After receiving the disc, when a teammate is open downfield, he without hesitation will hit them to continue the play and keep the defense moving.

Of course, Dunn is most devastating when making the killer play. His favourite throw is a flick huck, and he put several of them on a dime against Seattle. Don’t play Kan-Jam with this guy; if this game is any indication, he can apparently slot the disc from 75-yards every time. Here’s all five of his attempted flick hucks in the game.

Notice how he set up for the flick with a subtle but effective fake in the third, slow-motion clip. He knew that the defense would try to eliminate his up-line continuation throw, so a subtle shoulder movement opened up the throw he truly wanted. The dude has mad disc skills. Even though the flick is Dunn’s favourite throw, he’s more than comfortable gently putting his backhand where only his target has a play.

What’s the correct balance for a guy who is so comfortable playing small or big? To Dunn, it doesn’t matter. “Honestly, [I like playing] downfield, but anywhere downfield works for me. This weekend, in the game against Seattle, we actually did a really good job of, you know, everyone on offense worked in whatever sets were working. Most of what we ran was out of a ho stack because all game long it felt like it was useful, and it was doing its job. At the same time, we were cycling different pairs of guys to the center, and different pairs of guys to the wing. But as the offense flows, it kind of all becomes the same, either way you look at it. So to me, it really doesn't make a whole lot of a difference, whether I start in the center or the outsides, cuz I know that the end result is kind of going to be more the cycling stuff, and a series of isolations.”

His comfort and ability in any position of San Diego’s offense resulted in Dunn throwing the game-clinching assist in the waning moments of the final quarter.

Dunn found the dump and then used his quick first step to gain an edge cutting across the field. “If I can get that first step right off the bat,” explained Dunn, “it's an advantage that you're almost always gonna have, and you kind of force the defensive hand to switch, or allow one more pass to go off.” The throw wasn’t hard; a cutter popped open on the open side. Having devastating players like Dunn will manufacture easy chances. When all was said and done, Dunn finished with 9 goals and 5 assists. He completed 40 passes without throwing a single disc away. I asked coach Stuart if Dunn was going to compile 100 assists this season after this blazing-hot start. “Yeah, that's the plan,” he laughed.