The Dealer In Dallas | AUDL
Skip to main content 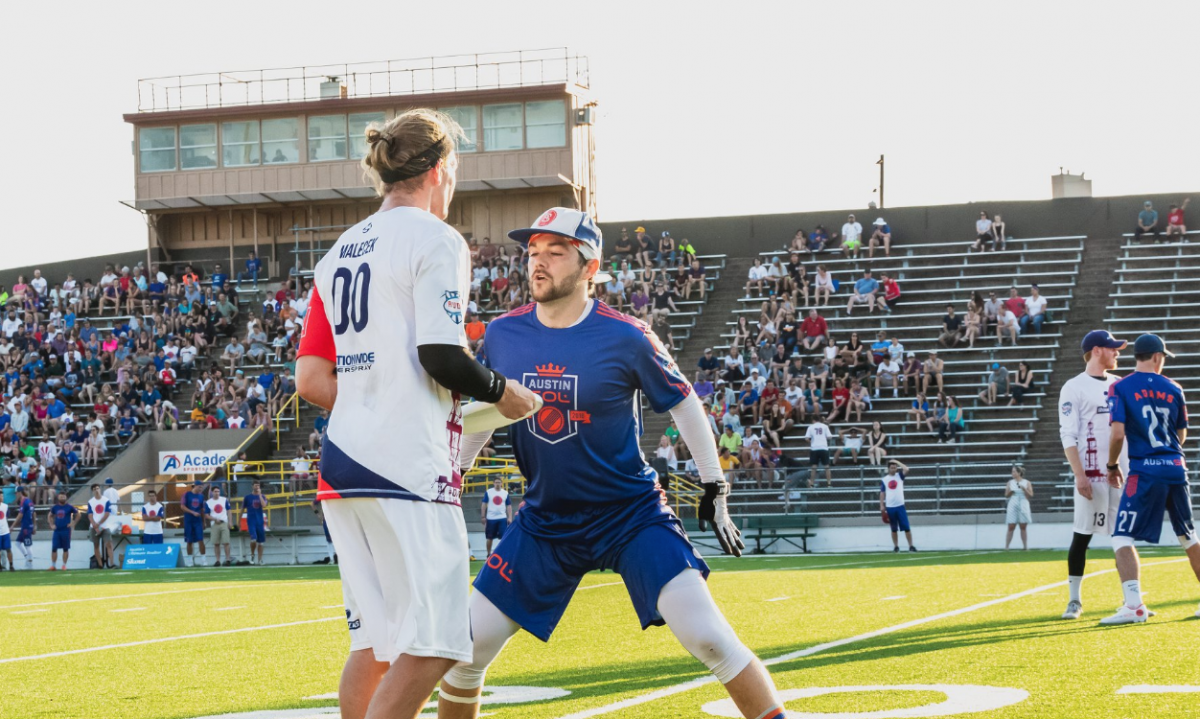 Stable possession handlers serve more to raise the baseline of a team’s offensive ability than its ceiling. They maintain possession, which in an AUDL in which top offenses convert three out of every four chances, is as important as breathing. For the Dallas Roughnecks, Matt Jackson is the ultimate possession handler. Among players with 400 completions or more on the season, Jackson has the third highest completion percentage in the league, at 96.2. Very few players in the world are able to combine his usage rate with his efficiency.

Dalton Smith and Chris LaRocque are equally effective. LaRocque has missed several games for Dallas, but when present he’s been near-perfect.  LaRocque has only coughed up seven throwaways in seven games played. He has a higher completion percentage than even Jackson, at 97.6, and can fit equally well as a handler, hybrid, or cutter on the offensive or defensive line.

Among the three, Smith is the least risk-averse. He fits discs into the tightest spaces, using throw-and-go moves to churn yards downfield before a defense is even set. His high-releases bring tears to the eyes of frisbee aficionados. As a result, Smith’s completion percentage is a ‘lowly’ 94.4. Smith is also the most comfortable shifting into the stack for Dallas, even catching 31 goals on the season. As an aside, his malleability is one of the most important weapons for Dallas; with Smith as an initiating weapon, Dallas’ offense is unpredictable, especially with Smith’s interplay with Jay Froude as initiating cutters.

Jackson, LaRocque, and Smith are workhorses for Dallas. Together, they ensure that Dallas’ offense can always move the disc forward or back. They offer resets if the downfield set or stall count become unfavourable. However, for Dallas’ offense to be at its peak, it’s important to have a higher-risk thrower in play as well.

Brandon Malecek plays that role for the Roughnecks. His presence ensures defenders must play tighter to their marks, opening up more space for easy motion and yardage gain. When Dallas is in the red zone, and the space an offense can use becomes minimal due to the back of the endzone, Malecek’s lack of conscience becomes a key tool.

He’s been the same weapon no matter the situation for Dallas. Even in 2016 and 2017, when Dallas was populated by the superstars of yesteryear, like Beau Kittredge and Kurt Gibson, Malecek played the same role for the Roughnecks. He led the 2016 team in offensive points played, more than Jimmy Mickle, Kittredge, or Gibson. The team was slightly more efficient on offense when Malacek was on the field, converting 80 percent of its chances with Malecek playing, versus 78 percent in total. The same situation repeated in 2017; Malecek led the team in offensive points played, and the offense was five percent (77 to 72) more efficient with him on the field.

“My job was pretty easy in 2016 [and 2017],” said Malecek. “It was basically to feed the all-stars. It was just distributing, and it was easy in the sense that all I had to do was get them the rock. Especially out of the side-stack, those guys are getting a lot of respect, and it's pretty easy to hit an under to the sideline.”

As a result, Malecek’s numbers have been remarkably consistent. He’s never thrown fewer than 31 assists for Dallas, but his 43 already in 2018 represent by far his most with the team. His completion percentages in the three years have wavered between 93.0 and 93.6; though he may be throwing more assists this year, his style of play hasn’t changed at all.

“[Early in the season,] we were talking about missing all this firepower, so I had to take shots. My first few games I went ahead and took some, and threw like 14 turns right off the bat,” he laughed. “I really kind of settled back into the role of just distributing again. Especially taking shots from the handler position, there's more people downfield, and from the shorter stall count, a lot of the time our cuts aren't really set up to go deep, especially off the initiation. I've kind of just settled back into just distributing and kind of letting the game come to you, as opposed to forcing shots.”

Malecek maintains a higher-than-average completion rate despite his tolerance for relatively high-risk throws. It’s not that Malecek sends the disc 70 yards whenever he touches the disc, but he just is comfortable slotting it into tigher windows than most other handlers. There aren’t a ton of players in the league who consistently complete throws with such a high difficult level: Chase Cunningham, Mark Burton, Jonathan Nethercutt, Harper Garvey. This is the category and style of throwers in which Malecek finds himself.

Interestingly, Malecek sees himself as more molded by possession handlers such as Andrew Brown of the Madison Radicals. He tries to mimic Brown’s on-field awareness, always knowing the most dangerous defenders, the poaches, and the possible trap throws. Where Malecek differs is that he retains some of his gunslinger D-Line mentality from college, when he shot the disc deep on most every play, confident that his defense could retrieve possession if it failed.

Dallas plays a slow brand of disc. Historically, dominant and high-powered AUDL offenses like the 2018 Los Angeles Aviators, 2017 Toronto Rush, or the 2017 San Francisco FlameThrowers averaged 10 throws per score. This year’s Dallas Roughnecks require 12.71 throws per score, which is the 6th slowest pace in the league. The Roughnecks are comfortable pushing the stack far behind an average team’s placement and allowing Jackson, LaRocque, and Dalton to play calmly and slowly before they reach the endzone.

This works well, but it’s important to offer the element of surprise. Malecek will switch it up, taking advantage when a defense pushes too far downfield to take away the under. Of course, any of Dallas’ handlers are comfortable taking shots, but the role is second-nature for Malecek, while more traditional offensive handlers may be too concerned with possession to open up the field.

Malecek is a wizard at using hammers to skip a swing pass and open up vital field space.

For nine out of ten players, that is not a good look. Defenses like Madison’s or the Atlanta Hustle’s are overjoyed when their opponents attempt hammer swings across the full field. The wrong edge or pace on the disc allows a defender the opportunity to contest the catch. Despite the risks, Malecek creates an easy score by hitting his target on the numbers.

“The deep can't cover both the wings, so if they leave a guy open, and it's not that windy, it just makes sense,” said Malecek of his propensity to throw cross-field swings against zones. “Let's just end it here, as opposed to, we could throw 70 passes and milk the clock, but it just takes forever.”

That’s the point of a high-difficulty thrower. Completing difficult throws creates offense out of nothing. It opens up easier throws later in the game, especially if defenders bite on defending those more difficult looks. Dallas is so athletic on the offense, with terrific defenders in Froude and others, that the team is confident it can force a turn even if a Malecek attempt fails.

While Malecek has nearly as many turnovers on the season as Jackson, Smith, and LaRocque combined, Dallas is no worse off for it. In fact, the team is at its best with Malecek at the helm, just as it always has been. Even when bold aggression results in turnovers in the short term, Dallas is confident that it boosts their offense’s ceiling in the long run. That’s a safe bet, as Dallas is 12-1 and vying for first-place in the AUDL. Though there are a host of reasons why, none are larger than the constant creativity of Brandon Malecek.