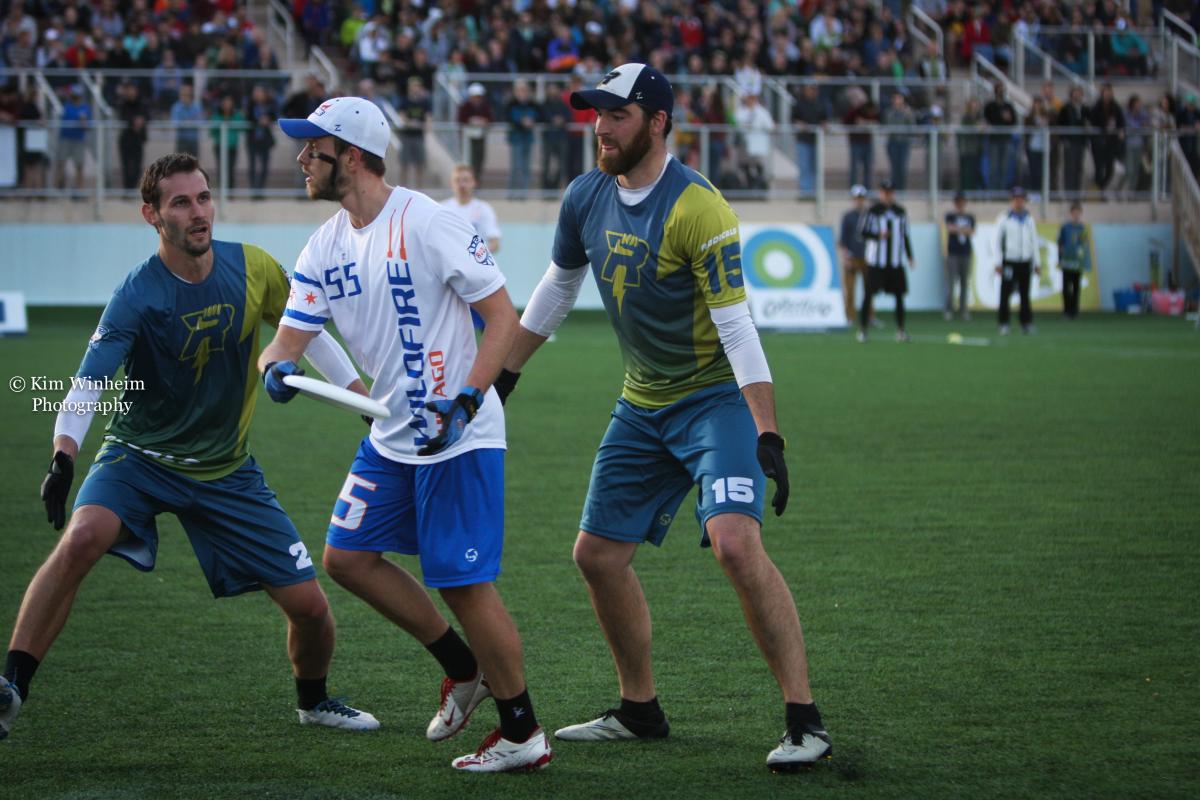 With a spectacular 21 assists in the final two Chicago Wildfire games, Pawel Janas finished the 2018 regular season with a new AUDL single-season assists record of 97. That mark shatters the previous assists record held by Tyler DeGirolamo, who threw 86 for the Pittsburgh Thunderbirds in 2015. Janas closed on the record with aplomb, throwing 11 assists against the Madison Radicals last Saturday, and adding another 10 assists against the Minnesota Wind Chill on Sunday.

Chicago Head Coach Adrian King insisted that the team wasn’t trying to boost Janas’ assist numbers towards the end of the season, instead simply running the Wildfire offense through their best thrower as they have for the past two seasons.

“There were people who were definitely aware of [the record], and whispered among themselves, but it wasn't really an acknowledged, outwardly spoken thing,” King said.

So how did Janas capture the record?

“This kind of sounds like a slight,” said King. “But Pawel doesn't seem to possess preternatural ability to just do amazing things. He very much seems like an average athlete who just spends so much time in the gym, so much time thinking about exactly how he's going to get better, that he just plans and wills himself to do these things. Being around him the last couple years, he doesn't have this amazing natural ability, but he has a very specific work ethic that really pays off.”

The work ethic Janas possesses has allowed him to craft a remarkable skillset. His footwork is exacting, and he uses his legs to pace with the disc, and to open up throwing lanes. Most conversation of pace in ultimate is related to cutters, but handlers have their own methods of controlling speed. Janas’ baseline pace when holding the disc is actually quite slow, lulling defenders into matching his speed and slowing to his level. Like James Harden in the NBA, Janas’ dynamic use of speed as a thrower is much more effective than most players, due to his sense of timing. His change of pace from being stationary to entering his throwing motion is extreme.

He is most comfortable as a stationary thrower, squirreling defenders into wrong steps with purposeful pump fakes. Janas loves to fake his flick, and he’ll hold the disc for a fraction of a second at what would be the release point, almost picturing the throw-that-wasn’t with the disc still in his hand. This would seem like wasted motion, but Janas is world-class at pivoting from that stance, with the disc already ahead of his body, into a no-pivot backhand. He uses his fake flick to open a throwing lane, while getting a step on his defender after the release as well.

Janas has the opposite throw also in his arsenal, during which he fakes an inside backhand only to fluidly extend the same motion to step outside of the mark with his right foot and launch a flick to the open side.

Many handlers are like AND1 mixtape dribblers, who throw fancy fakes at defenders for the sake of aesthetics. Janas is decidedly not that; his fakes are purposeful, and when he uses multiple fakes, they work as counters to create an opening that a defender hasn’t yet provided. Janas’ ability to pivot smoothly from fakes into throws is unparalleled, and it means he’s almost impossible to point-block. He creates these advantages with balletic footwork, always keeping multiple options alive instead of being forced into an awkward stance and limiting the throws available to him.

According to Janas, his fakes and footwork are all natural, other than a few specific moves he’s filched over the years.

“I don't purposefully work on fakes,” Janas said. “I do watch a lot of film, and I do see what other top handlers and top players do. If I see something that I like, like a shimmy, or a move, then I try to copy it. I may have done that four or five times in my career, but I don't really practice faking.”

Of course, there’s more to throwing than footwork and elaborate pump fakes. There’s also, you know, actually throwing the disc. Janas is as consistent a thrower as there is in the AUDL, and he never makes unforced errors. After committing 74 throwaways last year, Janas reduced that number to 28 this year, which is astounding given his individual usage rate.

For a point of comparison, the league’s second, third, and fourth place finishers in assists this year threw 39, 39, and 69 turnovers this year.

“Last year, he had a ton of throwaways,” said King. “I think that bothered him, that he was known for turning the disc away, or being careless, or reckless.”

Janas always connects on the easy passes, but he rarely misses even difficult targets. After using his shiftiness to open throwing lanes, Janas is more than comfortable leaving a huck on a platter where his cutter has the first play on the disc.

Even if the throwing lane isn’t clear, Janas has such control over the disc after it leaves his hand than he can use a sub-optimal flight path and still put the disc in the right place at the end of the throw. Here he uses a big backhand that lifts higher off the release than is natural, as a result of a help defender sitting in the simplest flight path; however, he uses a sharp edge to make the disc drop quickly instead of flying out of the back of the endzone. His touch makes sure the edge on the disc doesn’t cause it to fade too far over his defender’s outside shoulder.

Alongside all of his individual talent, situation and context are also friends to Janas. Even the best thrower wouldn’t have a hope of challenging for the assist record in the AUDL without a friendly system. Chicago’s is built around Janas. The team doesn’t lack throwers, but the best arms – aside from Janas himself – are best employed in different situations. Tommy Gallagher is a handler alongside Janas on the O-Line, but he’s most comfortable throwing short completions and working the disc into others’ hands; he threw 292 completions in 2018, and only five assists. Kurt Gibson is obviously one of the world’s best throwers, but he’s a terrific downfield athlete as well. To leverage his multiple skills, the Wildfire prefer Gibson to set up in the stack and either beat opponents downfield or cut under to distribute from power position. Max Trotter is an incredible quarterback, but the Wildfire prefer to use him on the defensive side, where he can create turns and lead the defensive offence. The result is more throwing opportunities for Janas than for perhaps any other handler in the league.

Another beneficial situation for Janas was the ability of his cutting core. Alongside Janas on Chicago’s optimal offensive line were Simon Johansen and Michael Pardo, both freakishly athletic receivers, standing at 6’3” or 6’4”, capable of leaping over any defender. Kurt Gibson is somehow always able to come up with the disc with multiple defenders around him in a pile. Ross Barker is one of the league’s premier speedsters, happiest flying deep to receive a huck.

“I love Ross. Thank god for his speed.” I asked Janas when he knows Barker has his man beaten – when does he know Barker is open deep? “When I see him,” he laughed.

However, because the Wildfire’s offensive context asked so much of Janas, he had immense responsibilities, despite the talent around him. His assists-per-point number – 0.25 – was fantastic, meaning that he threw one assist for every four points on the field. Many other elite handlers, like Brandon Malecek (0.16), Keenan Plew (0.16), or Chris Mazur (0.19) offered far lower assist-per-point rates, because they had more throwing threats playing alongside them in handling positions.

Janas was basically his team’s possession handler (high completion number, high passing percentage, low assist per throw rate) and his team’s high-risk shot-taker (high assist total, high assist per point rate). Have you ever wondered what Raleigh’s Jonathan Nethercutt and Bob Liu would look like in one player? It’s basically Pawel Janas. For the record, only seven other players also led their teams in both completions and assists: Rowan McDonnell for DC, Malecek for Dallas, Plew for Indianapolis, Derek Alexander for Ottawa, Jack Williams for Raleigh, Eli Kerns for San Francisco, and Sonny Zaccaro for San Jose.

97 assists in a single season is an unbelievable record, and it required a series of factors in Janas’ favour. Janas is one of the world’s best and most consistent throwers, and he plays on a team that requires him to throw a majority of the shots to the endzone. His offence rostered a stable of athletes, capable of hauling in anything sent their way. Furthermore, Janas played in all 14 games. That’s a lot of factors that combined for Janas to set the bar so high.

However, according to Janas himself, there was one more factor. He derides assists as a statistic, claiming that they tell nothing about a Frisbee player. If they mean nothing, then how did Janas manage to compile 97 assists in one season?

“By luck. Randomly,” he eventually replied.