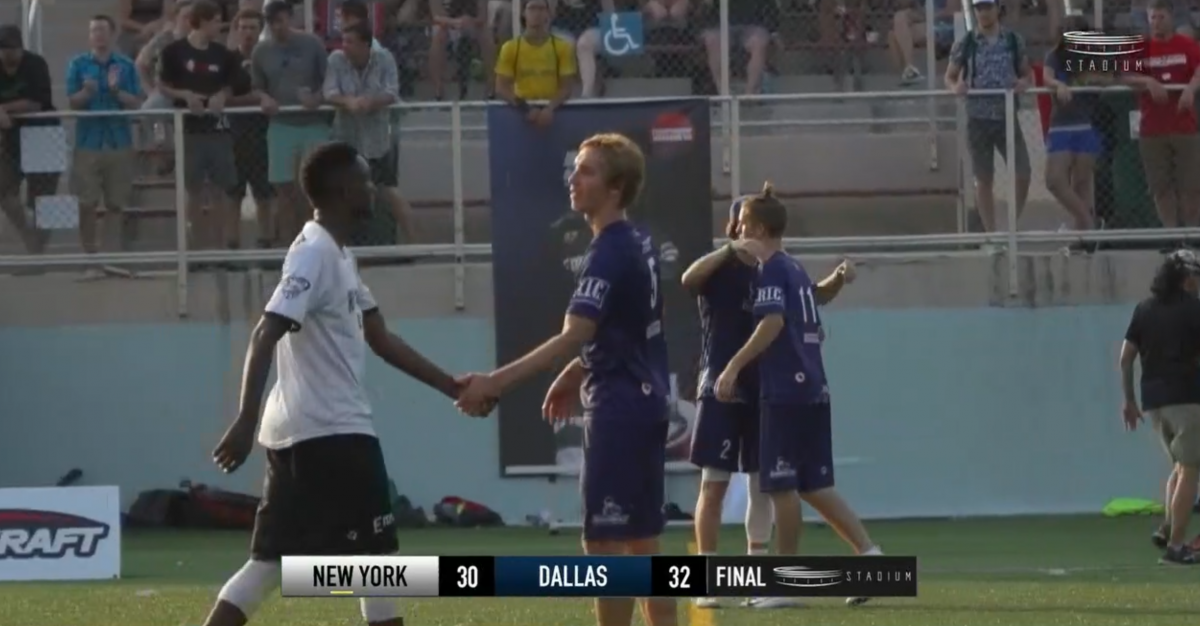 The Dallas Roughnecks will be heading to their second AUDL championship game in three seasons after defeating the New York Empire 32-30 in the semifinal of Saturday night.

Ben Jagt especially dominated for New York, as he caught each of New York’s first three goals with deep cuts. The game’s first break goal came halfway through the first quarter after a New York drop. Both defenses were effective with the disc all game long, converting almost immediately after claiming possession.

Jagt transitioned to dominating with his throws in the second quarter, as he found Jeff Babbitt deep for a variety of impressive scores. The first turnover of the second quarter came as Brandon Malecek threw a poor centering pass, and Mike Drost caught a Callahan for New York to tie the game at 12. A few unforced New York turnovers towards the end of the half allowed Dallas to take the lead at half 18-15.

Dallas opened the third quarter with continued pressure, forcing a Harper Garvey throwaway. The Roughnecks offense cleanly converted once again, as Dillon Larberg led the charge. He finished the game with five assists. The pace finally slowed, as both teams settled into more effective defenses. Offences held up, throwing clean points, but taking longer to score. The third quarter finished with only one turnover – ending in a Dallas break – as the Roughnecks received in the final quarter, leading 25-23. Jay Froude led Dallas in the third quarter, beating Beau Kittredge at will to pace the offense.

The fourth quarter began with Dallas again throwing to Froude deep, but Kittredge caught up and tipped the disc. It was a sign of Dallas’ impending win when Froude still easily tracked down the score. A Dallas break pushed them ahead by four points following an Empire turf.

Connor Olson provided multiple exclamation marks for Dallas as he exploded in the endzone with multiple full-extension layouts in the final quarter. He finished with five goals. New York staged an impressive comeback, even successfully dropping a pull on their own endzone and converting to score. It wasn’t enough.

Though Jagt was decidedly the most impressive player in the game, finishing with nine assists and six goals, Dallas was the better team. Their win will end New York’s Cinderella story, but will continue the Dallas’ three-year run as a dominant franchise.