This is one part of a series of primers to introduce all four teams at 2018 AUDL Championship Weekend. Primers for: Dallas Roughnecks, Los Angeles Aviators, and Madison Radicals.

By far the biggest surprise of the 2018 season is the New York Empire and their attendance at Championship Weekend. After finishing third in the East Division at the end of the regular season, New York grinded out tough wins in their first trip back to the postseason since 2016. The Empire won as underdogs in Washington D.C. and then beat the Rush for the first time ever in New York's franchise history to reach Championship Weekend. They boast one of the most organized, physical defenses in the league, and they rely on stars with unmatched athleticism. New York will entire Championship Weekend once again as an underdog, but they’ve shown that by playing to their strengths and following their gameplan, they can beat more talented teams.

This team has rebuilt itself multiple times this season. They’ve completely changed their offensive system, simplifying how cutters enter the action from the stack. The Empire have also redesigned how they deploy their personnel. New York only unleashed their devastating giant lineup in the playoffs. These seven hadn’t played a single point together before the playoffs, and the offense converted at a 77 percent rate in the two playoffs wins with the Empire’s three giants on the field.

New York’s first look is Garvey throwing bombs to one of Jagt or Babbitt cutting deep. Both are incredible in the air and have underrated speed. How many teams have multiple athletes capable of defending Jagt and Babbitt – and play them both on the D-Line?

New York simply dinked and ducked their way into the endzone when deep shots were taken away. Mieser and Katz are more than capable as off-handlers, and Mieser especially is terrific at freeing himself for a reset. Kittredge has transitioned more and more to a handler for the Empire, particularly as he’s still limited by a strained calf. If teams want to defend Kittredge with an athletic deep defender, that’s one more giant who’s not guarding Babbitt or Jagt. If teams want to defend Kittredge with a handler defender, he will easily beat them in the air.

The Empire do not play a deep lineup. As a team, only the above-seven players, combined with a few other rotation pieces who have since moved to the defence, have played serious minutes on the offense. They are not as versatile or as deep as the other three teams at Championship Weekend. That didn’t matter against the DC Breeze or Toronto Rush in the playoffs, when New York had a full week in between games. Stamina could factor in much more heavily at Championship Weekend, when a win on Saturday would mean another game on Sunday. 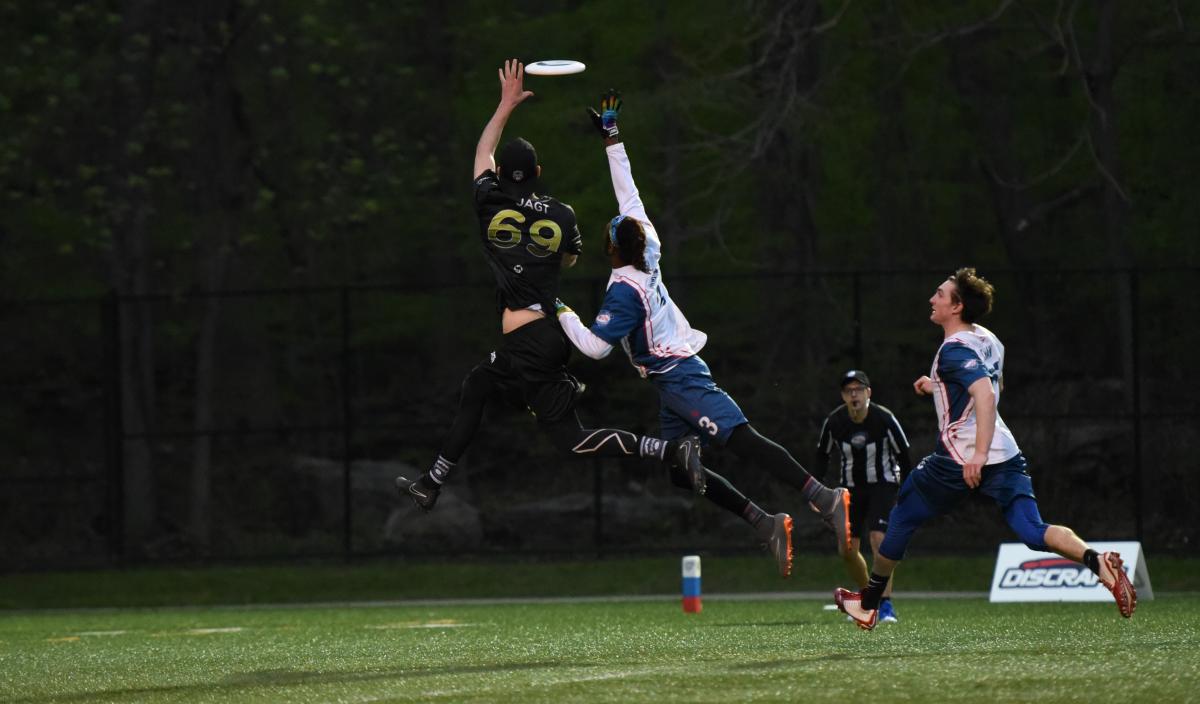 Empire Head Coach Eileen Murray is quick to point out that Jagt can’t dominate without the team’s wealth of talent surrounding him. During an important three-game winning streak in late June and early July, Jagt threw 11 assists and 10 goals. I asked Murray about Jagt’s dominance, and she briefly touched on his athleticism before turning to the skill of Mieser, Garvey, Josh Alorro, and others. Jagt himself bristled at the notion that he’s evolved into a more complete player, with better throws; he insists that he’s always been a complete player.

Yes, New York has a lot of talent. But none of it is unlocked without Jagt. He is New York’s best athlete in the air, save perhaps Babbitt. He is fast enough to sprint past most defenders. The result is that teams back him. Jagt has developed into a very capable thrower, especially when his targets are athletes like Babbitt.

Jagt’s flexibility is perhaps New York’s best asset on offense. Babbitt is a terrific athlete, but New York doesn’t want him to launch too many tight-window throws. Garvey won’t leap over anyone in the endzone. That Jagt can do both shifts everyone else into their proper positions, releasing pressure on the entire offense. 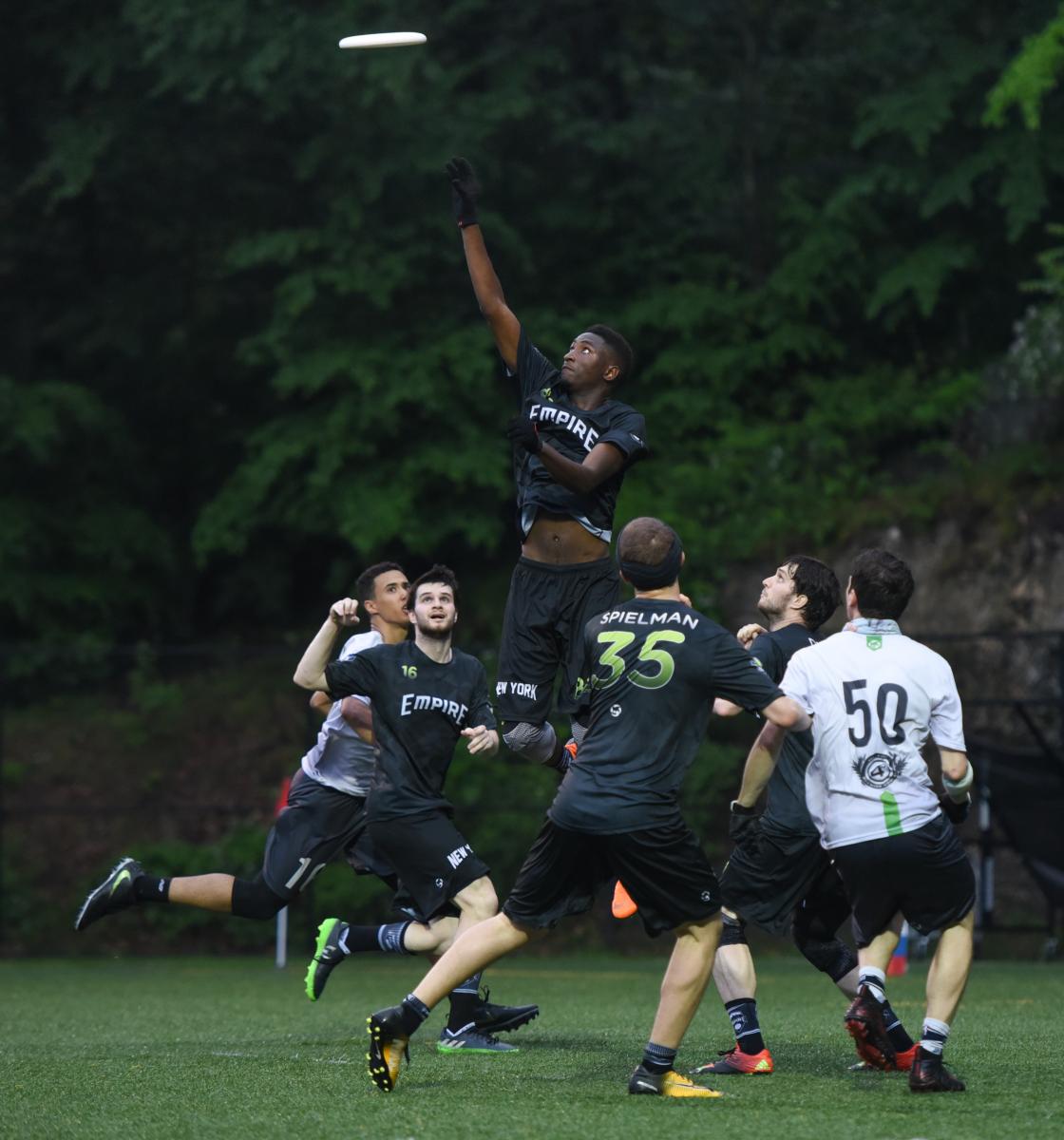 The New York Empire do not play a deep defense, but they make up for it with stamina and effort. Alorro was a career defensive player who played most of 2018 on the O-Line, who has since returned to the defense for the playoffs. The Drost brothers Mike and Ryan are block magnets. Other athletes like Matt LeMar, Conor Kline, Marques Brownlee, Matt Auletta, or Ryan Holmes are staples. Matt Weintraub is an integral component, both at gumming up opponents’ pull-plays, and at handling after a turn.

The Empire will also rotate all of their best athletes onto the defense. Babbitt, Jagt, and Kittredge all see healthy doses of minutes on New York’s defense.

On a turn, Kittredge shares playmaking duties with Weintraub and Alorro. Weintraub specializes in breaking marks and Alorro in speedy cuts. When the defensive offense positions Kittredge in the breakside space, isolated against a single defender, New York will always be able to move the disc down the field. They play slow, happiest earning yards five at a time.

New York wants to gum up games, slowing them down. They want wind and rain. They’re happier playing in a hurricane – as they did against DC in the first round of the playoffs – than in the sunshine. The longer points take, the better positioned the team is, particularly because they run so few players on offense. New York was proud to set the record for longest stretch without a goal against DC. New York beat DC and Toronto in the playoffs because the Empire’s defense controlled the pace of the games, and they will look to continue doing the same at Championship Weekend.

All photos by Jen Voce