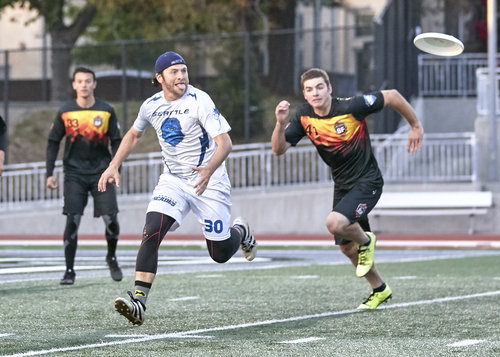 When Mark Burton started playing ultimate, he wasn’t anything special. In his junior year of high school in Seattle, he started playing church pickup in a park near his house. They would play 20-on-20 in the dark with a glowing disc, and many nights would be interrupted when the sprinklers turned on and soaked the players.

Still, they played through the water.

Burton didn’t dominate those chaotic park melees, nor was he immediately the best player when he began playing in San Diego during his college years. There was little hint of the player who would throw 222 assists and score 106 goals over his first three seasons with the Seattle Cascades. But from the beginning, Burton always showed a special kind of persistence.

Today, Burton is focused on returning his Cascades to the AUDL playoffs for the first time in three seasons in 2019. He wears many hats as a captain, teacher, and offensive star for Seattle, which is fitting because that’s where his ultimate career began to bloom.

Already a veteran in the sport, the first time Burton played in the AUDL was during the 2016 season. Seattle made it to the playoffs in 2015 and lost a close game to the eventual-champion San Jose Spiders, and the Cascades returned many of their stars in 2016. It was a talented and experienced group; however, Burton still led the team in a variety of statistical categories in his first year. He made First Team All-AUDL, throwing 60 assists and catching 40 goals.

That same season, Burton was a participant in one of the AUDL’s most historic games. It was Championship Weekend V at Breese Stevens Field in Madison, WI, and thousands of fans showed up to watch the semifinal between the hometown Madison Radicals and Seattle.

It was all Radicals until midway into the third quarter, with the team building a multiple goal lead.  But Seattle would not go away, and they turned up the defensive intensity in the second half, forcing misthrow after misthrow from the Radicals. At the end of the third quarter, Seattle blocked a Madison shot into the endzone in the waning seconds, and Will Chen picked up the disc. With only moments remaining on the clock, Chen sent the disc the full 80-yard length of the field for the buzzer-beater.

“I think we recognized after that, we do have the power to put it deep in the endzone, let's just start taking shots,” remembered Burton. “Rather than trying to possess the disc and run through our system, we might have to play a little improv frisbee and be sending things out there.”

From Burton’s point of view, the game remains the highlight of his career. Seattle would accomplish their historic comeback against Madison before losing the 2016 AUDL Championship the following day to the undefeated Dallas Roughnecks.

“I've been to World's. I've been to many other [elite events],” Burton said. “Playing that Madison game easily goes down, even if you ask some others, even those who have kind of moved on from the Cascades, they'll still say that was one of the craziest games they've been part of. Literally, almost everyone was against us. We had a couple Cascade fans, but all of Madison was there, and they were all against us. Just playing underneath the lights, and looking around, and seeing wow, this is what I hope ultimate frisbee can be. It was such a thrilling, thrilling place to play.” 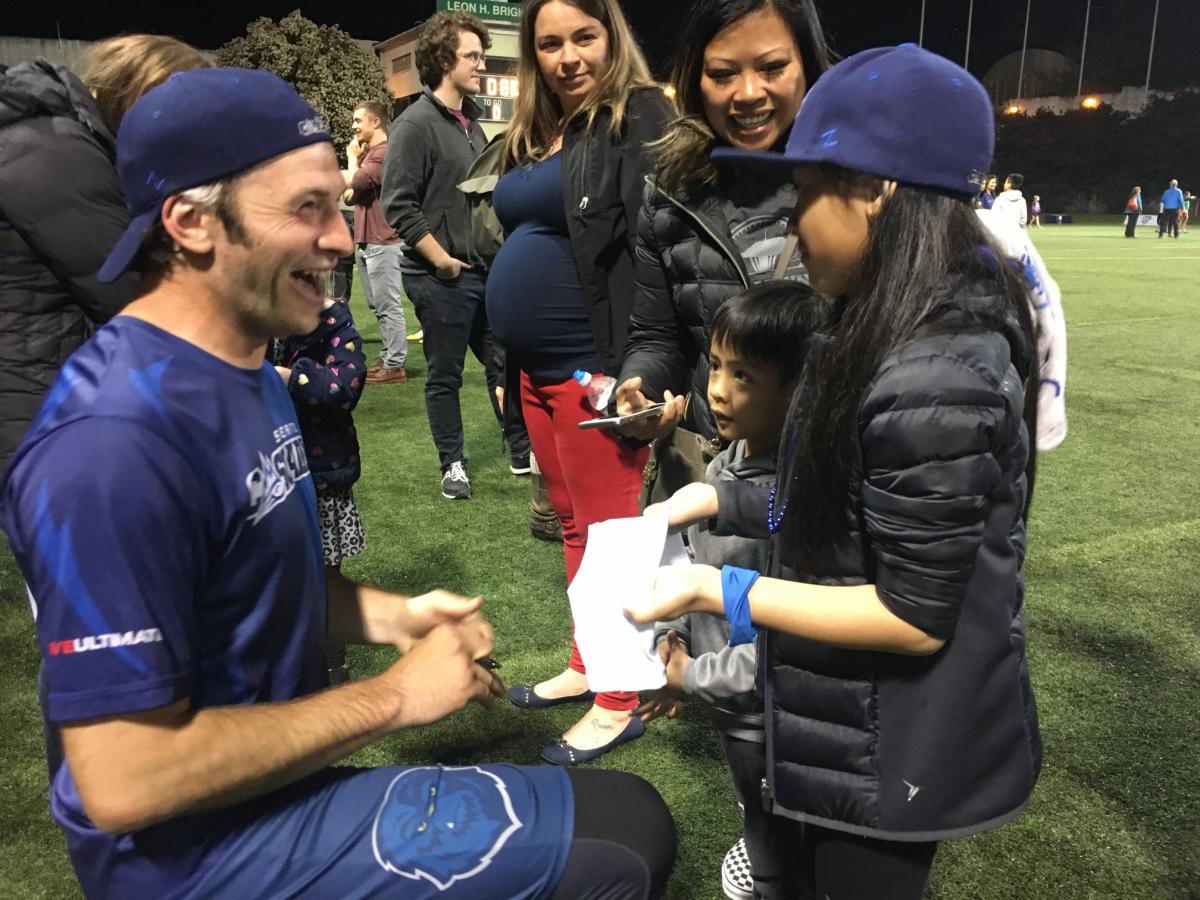 Seattle lost a lot of talent heading into the 2017 season, and they decided to rebuild the team around youthful talent, athleticism, and Burton. With only a few 2016 holdovers like Brad Houser and Alex Duffel, the 2017 team struggled to a 6-8 record. In 2018, the team gave lots of playing time to rookies like Kodi Smart, Shane Worthington, William Coffin, and Marc Munoz. Though they finished 5-9, Seattle believes it is primed to surge forward in 2019.

Burton became the unquestionable offensive fulcrum and team leader in 2017 and 2018, and he delivered in historic ways for the Cascades. He again made the All-AUDL First Team in 2017, throwing 81 assists and catching 36 goals; Burton was named to the All-AUDL Second Team for the 2018 season, tallying 81 assists and 30 goals.

Though Burton’s individual statistics haven’t always translated to team success, Burton’s statistics have been incredible. His 162 assists over the two years are second only to Pawel Janas’ 182, and over the same period Burton actually out-paced Janas in assists-per game, at 7.4 to 6.5. Burton is hoping to be able to play in more games this year, and he has eyes on the assist record.

“It's one of those things, for me, I know it's there,” said Burton of setting the assist record. “I definitely have a knack of looking for the endzone when I do get the disc… I'm not trying to force anything, but at the same time, yeah, I definitely do talk about it. I've literally missed four games the last three years. Those four games, I know I could have broken [the assist record].”

“It is in your head,” he continued. “It is in your head... And I knew when, last year, I knew that they were going to give Pawel the disc so that he could break the record… I don't want my teammates to do that. Let me earn it.”

Burton loves passing his skills and smarts onto younger teammates; with a nearly completed Master’s in athletic administration, he intends to one day become an athletic director at the collegial level. But he almost cut his career short after the 2018 season.

“Last season, I was definitely burnt out,” said Burton. “I had a lot of thoughts, a lot of things going on. I needed an offseason somewhere. I'm deciding it's going to be club. I want to win the West Division this year… I want to play Madison again. I want to play in front of all those fans, and I want to do it with this team.” 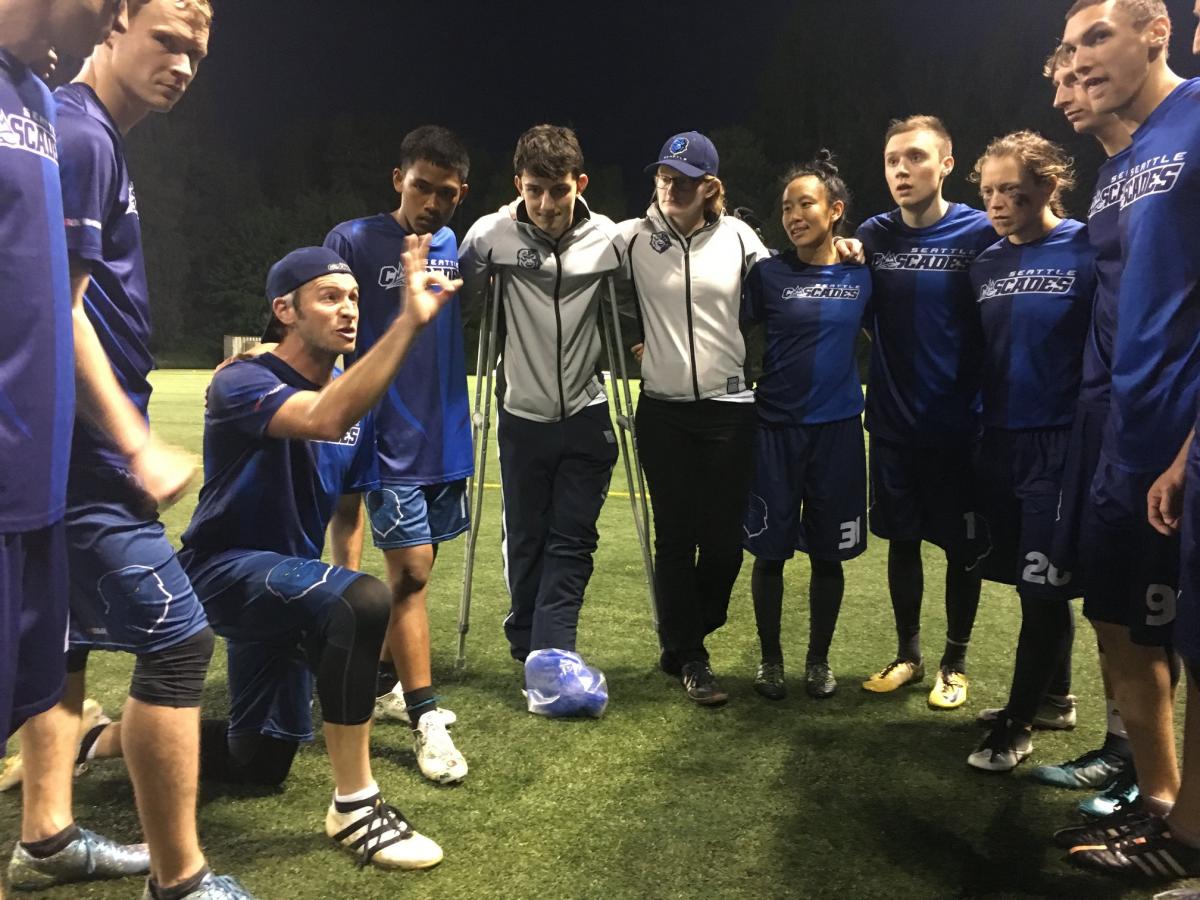 There’s more motivation for Burton than the AUDL playoffs. He loves Seattle, and he loves the Titcomb family, who own the Cascades and are terrific community organizers. He sees playing for the Cascades as one of the best ways to develop ultimate in the community. Burton believes in the Cascades’ mission, which extends far beyond winning AUDL games.

“It starts with the Titcombs and what they're doing,” said Burton. “If we're running a clinic and a kid can't afford it, they're going to pay for it. They're really trying to get the word of mouth out for how ultimate is incredible, and how this sport has created role models and has helped grow with issues that have been brought up more recently, with gender equity, and socioeconomics.”

In only three years, Burton has been to the AUDL finals once, been named to three all-AUDL teams, and thrown 222 assists. His 6.7 assists per game lead the AUDL all-time among those who’ve played more than one game. He’s come a long way since dashing through sprinklers during church pick-up in the dark, but Burton freely admits it’s still the kid in him that keeps him coming back in search of the playoffs. Playing within a division that seems to change hands every year, Seattle is hoping to be 2019’s best from the west. They’ll soar as far as Burton’s leadership, veteran poise, and on-field abilities can take them. If the distance that Burton can toss a disc is any indication, the Cascades might be in for a big year.