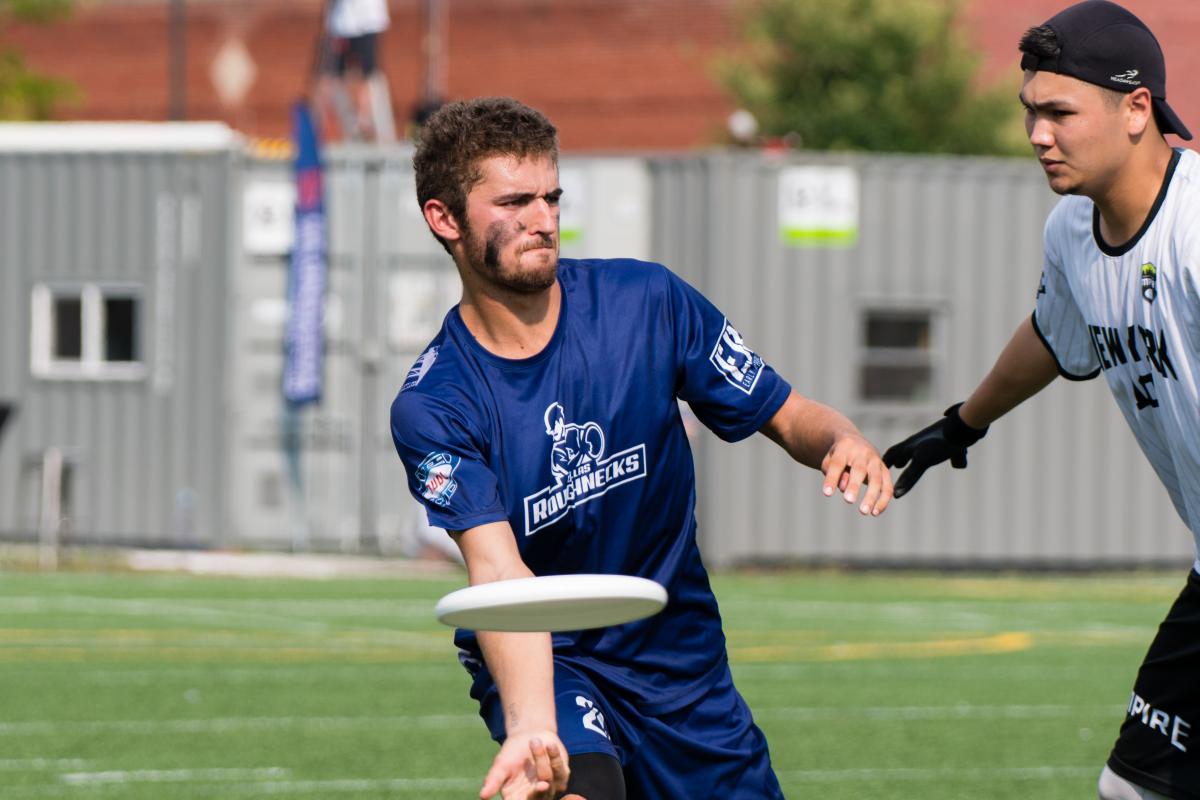 Carson Wilder was feeling it. Down one goal to start the 2018 AUDL championship game, the Dallas Roughnecks were looking for a quick response after a towering Peter Graffy goal gave the Madison Radicals early momentum. WIth teammate Jay Froude receiving the disc at midfield on one sideline, Wilder takes off from the same yardage marker on the opposite side of the field, bringing top Madison defender Sterling Knoche with him. Froude launches a huck for the endzone, and another Radicals defender in Kevin Pettit-Scantling has a read on the play. With all three players converging under the disc in the endzone, Wilder gets the best read of the bunch, going up early and aggressively and then, somehow, lingering for a moment in the air. 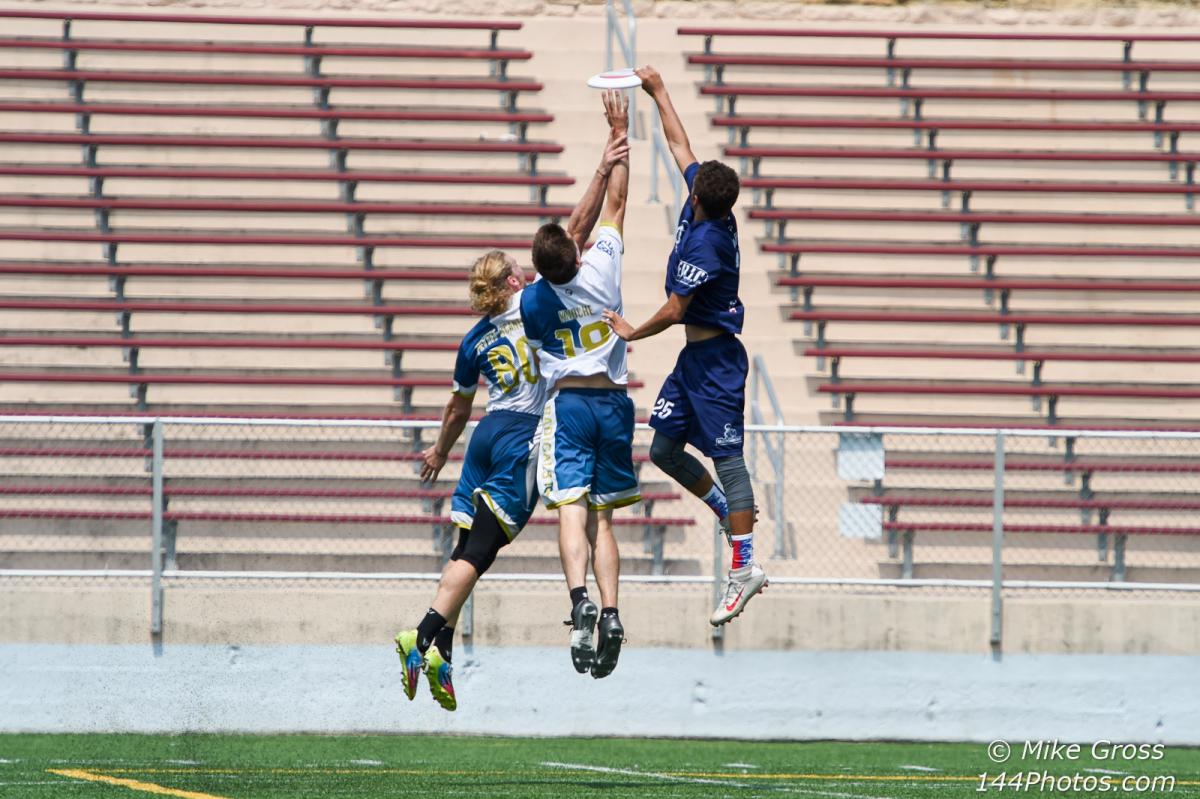 The result was the 22-year-old Wilder posterizing two of the best defenders in the league in the biggest game, bringing his own ladder and building a full roof over both their heads. It was the pinnacle play for a young player putting it all together at Championship Weekend, but far from extraordinary for Wilder, who has shown glimmers of his potential for two seasons before having a breakout 2018 in his first year with the Roughnecks.

A former member of the interstate rival Austin Sol, Wilder functioned as a spritely-if-efficient offensive cog his first two seasons in the league. In 15 career games with the Sol splitting time almost evenly between offense and defense, Wilder completed 92 passes compared to just three throwaways, and averaged just over two scores (assists plus goals) per game in limited action.

But Wilder's transition to Dallas in 2018 brought with it a new and expanded role in the Roughnecks high speed offense, and Wilder didn't hesitate at the opportunity. His speed and gunslinging mindset matched right away with athletic veterans like Froude, Matt Jackson, and Chris LaRocque. After hauling in the game-winning score in his first game with the team in a road win over the Raleigh Flyers, Wilder followed up the next week by going off for six goals against the Los Angeles Aviators, and then again the next week after that with a five-assist, four-goal performance against his former Sol mates. The raw numbers are impressive, sure, but what really stood out was the swagger, the audacity, of some of the plays.

Emphatically erasing packs of would-be defenders in the air.

Effortlessly launching high release flicks into a heavy Dallas headwind, and dropping the disc in on a dime. There's an energetic fluidity to Wilder's play and throws that is immediately eye-catching, and his overall style is decidedly new school with loads of flair. But don't mistake the young bravado for lack of polish—the kid has a deep bag. Wilder has power and touch on his forehands and backhands as a thrower, and uses his pivot well to keep his defender slightly behind him on the mark; his step through backhand throw has a rock-the-cradle smoothness to it.

But much like his roommate and fellow Texas Tech product Kyle Henke, Wilder needs to cut down on mistakes before earning true star status. After throwing just three throwaways in his first two years, Wilder tossed 20 in 13 games in 2018 including the playoffs, finishing with a lowly 88 percent completion rate. Some mistakes are expected being given a green light as an emerging talent on a new team, and year two with the Roughnecks looks immensely hopeful for Wilder in 2019. 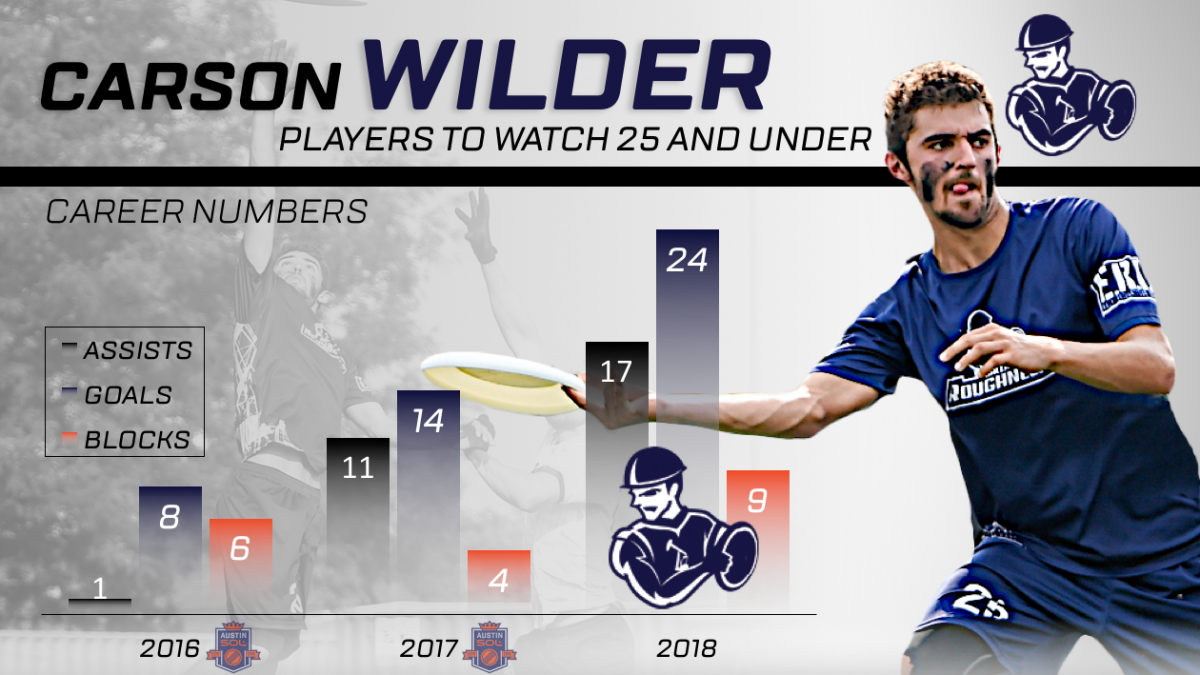