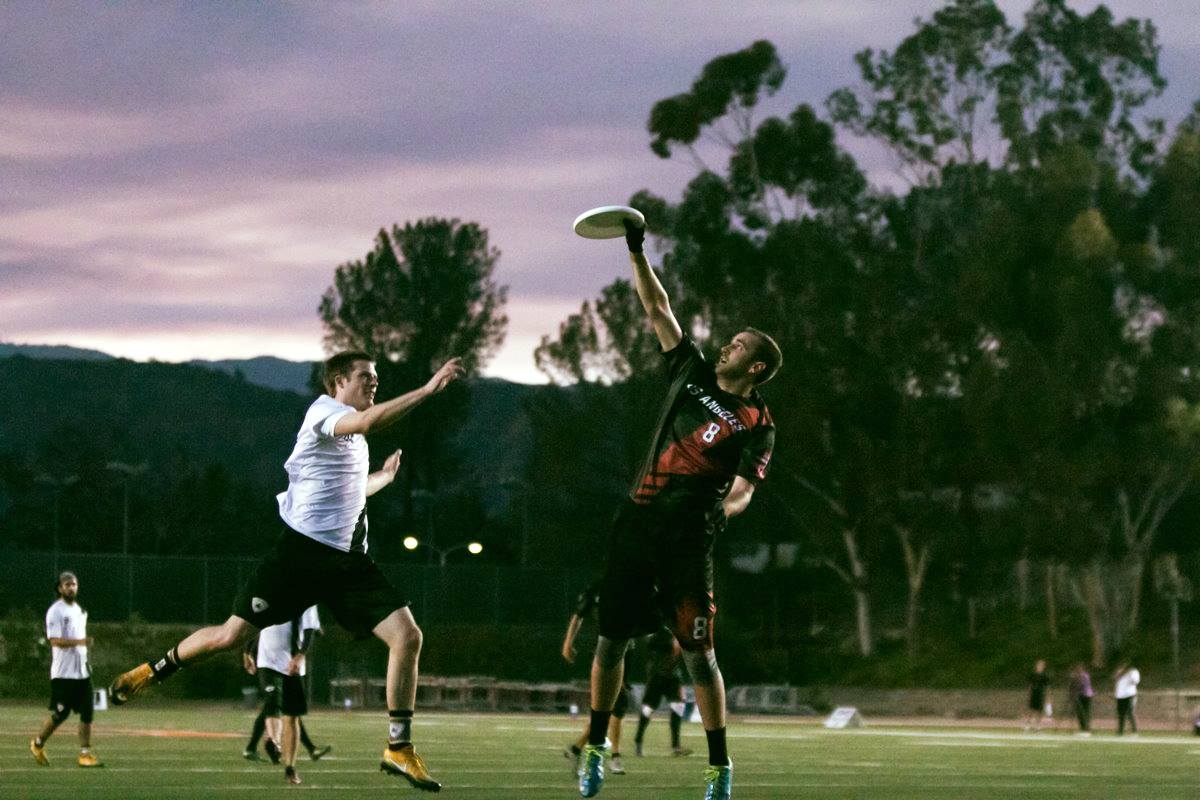 It is fantastic to see Jeff Silverman back on the field, happy and healthy, after a scary Week 3 injury in Dallas.

Chris Mazur’s skills have been a boon to the Aviators so far this season. He’s been one of Los Angeles’ best players this season, as his rocket launcher throws and deceptive receiving skills have ignited the team’s scoring potential. And, oh man does he have hammers.

Mazur began the season on the defensive line, which could be where coach Jamison Gorin intends to play him full time. Due to injuries to offensive stars Mark Elbogen and Eli Friedman, Los Angeles was forced to play Mazur on the offense against the Spiders. His skills open up so much for the team.

Tim Beatty is a devastating possession handler, but he only recently in his career became a center handler. He’s quite used to entering the stack as an opportunistic cutter, and finding lanes for easy goals downfield. That can be a problem for the Aviators, who can sometimes look like a plane without a pilot when Beatty isn’t back to handle. Enter Mazur. His ability to morph into a high-volume thrower allows the freedom for Beatty to roam.

Beatty compiled five goals against the Spiders, which was second on the team. The offense is so much more open and free-flowing when Mazur is on the field. When asked if he’ll be forced to keep Mazur on the offense, coach Jamison Gorin laughed.

“I think the offense looks good with and without him.”

The Spiders have long enjoyed the highlight-friendly performances of Jackson Stearns. He’s been an offensive cutter since his first day on San Jose in 2016. Stearns is 6’4”, and he’s surprisingly dangerous after the catch on the throw. He has long arms and quick trigger, able to fling a huck deep like a gunslinger shooting with his pistol barely out of his holster.

New to the team is rookie Zach Sabin. Sabin stands an equally impressive 6’4”, and his quickness is that of a much smaller man. Sabin played almost exclusively on the offense, and he caught seven goals and threw two assists against Los Angeles. Only 23 years old, Sabin has a long future ahead in Ultimate.

The Aviators were masterful with under 10 seconds winding down at the end of the first quarter. Brent George had the disc near the endzone on the right side, but he calmly swung the disc and cut to the far corner before receiving a hammer for the goal. His patience was rewarded.

The Spiders, on the other hand, with only three second remaining, threw their deep huck a few yards short of the endzone. Zach Sabin didn’t have the foresight to either milk his catch into the endzone or tip it to a teammate.

To end the second quarter, the Spiders owned the disc with thirty seconds remaining, and they took a timeout to get the offense on the field. All well so far. However, an unforced turf gifted the disc to the Aviators, who were left with one play and zero seconds remaining, due to a foul in the endzone. Chris Mazur herked and jerked his way into a gorgeous push pass into the middle of the endzone for a goal.

The Spiders improved. In the third quarter, San Jose finally scored on a blade-y toss to the endzone with only a few seconds remaining, and they pulled out all the tricks in the remaining moments. They pulled a roller out of bounds and then set a double team with their two largest players: Sabin and Stearns. Tim Beatty wasn’t able to reach the endzone with such monster marks closing every throwing lane. This defensive set-up would rear its effective head one more time towards the end of the game.

The Spiders busted out a zone a handful of times, but the Aviators have so much skill on the offensive line that it was unlikely to do much damage. On multiple occasions, a few swings, a quick upline backhand to a power position cutter, and a huck was all it took to find the endzone against the Spiders zone.

As stated above, the Aviators were even missing some of their best offensive players. The league is searching for the best way to defend this Los Angeles team, which has required a league-low 8.60 passes per goal. The Aviators have had poor availability thus far on the season from their stars, but it hasn’t mattered.

Someone will have to slow down this Aviators offense at some point this season, or the West may find itself hoisting another AUDL championship trophy. No one has yet succeeded, and you can add the Spiders zone to the scrap-heap of defenses that have been shredded by Mazur, Beatty, and co.

Teams should just consider letting Zaccaro catch easy resets. When teams deny the reset to Zaccaro, his acceleration over five yards is so immense that he can always find himself gaining a few yards in power position. Would-be handler defenders overplay Zaccaro, and he scoots back a tick, getting opponents to shift their weight into just the wrong spot, before he slides forward, getting the disc with momentum and without a mark. That spells death for a defense.

Zaccaro’s incredible ability to find himself open at will is one of the reasons why the Spiders are comfortable shifting Justin Norden onto the D-Line, where his surehanded throwing can ensure break chances are converted. The Spiders missed Norden against the Aviators, but Zaccaro was up to his old tricks.

In the final quarter, the Aviators defense finally tightened the screws on Zaccaro. Zaccaro thought he wasn’t open, while his cutter believed him to have a step. The result was an all-important mix-up that gave the Aviators possession with less than a minute remaining.

“That was one where it was just a tight window, so I didn't really think it was there,” explained Zaccaro. “I just stopped the cut. I was more trying to get separation from my guy. We kind of got a little frantic. At that point I was looking for a reset, so I danced a little too much. I put my guy in a bad place, where I think I got a little separation when I saw the tape, and if I kept going I would have had a goal, probably, but I didn't think it was there, and I stopped that cut.”

That the Spiders lost the disc due to the above-mentioned mix-up was good fortune for fans, as it set up an outrageous play to save the game for the Aviators.

San Jose employed the same double-team-from-giants tactic that won them the end of the third quarter on the initial mark., and the combined twelve-foot-eight mark from Stearns and Sabin almost forced a turnover again. The ensuing fadeaway hammer seemed destined to hit the ground and return possession to the Spiders, who were down only one point. Instead, Tyler Bacon sprawled across the ground to make the catch and close the door on any San Jose comeback.

“It was a bit of a roller coaster ride,” laughed Aviators coach Gorin.

The Aviators always seem to fly under the radar for the first few quarters. Whether it’s a lack of energy to start the game, or a strategy that wears on opponents, Los Angeles generally roars into games in the second half. That was no different against the Spiders, who outplayed the eventual victors in the first half. With so much talent on the Aviators’ offense, it’s possible that players can try to do too much.

“We need to be better about our spacing and staying in our lanes, so it's easier for our handlers to find our cutters,” explained Los Angeles coach Jamison Gorin, in answer to why the offense had to work so hard for scores in the first half. “In the second half, I think we did a much better job of isolating our cutters.”

The Aviator’s defense ran roughshod over the Spiders in the third quarter, with Zach Theodore catching countless goals. Three of the first four Aviator breaks came via Theodore catches in the endzone. That third quarter was really the only time frame that the Aviators won definitively.

“We made some mistakes, and three quarters is not a complete game,” bemoaned Spiders coach Tyler Grant.

Los Angeles outscored San Jose 8-5 in the third quarter. Their offense was smooth and potent, and even when they did turn it over, there are terrific defenders on the line. Sean McDougall, Mazur, and Bacon are fantastic defenders who played on the offense against San Jose, which gave the Aviators more room for error. Opponents have slim margins when facing Los Angeles, and the third quarter was the only quarter in which the Aviators properly outplayed the Spiders. It was enough.

Sean McDougall plays like havoc shot out of a cannon. He is constant entropy, offering tipped discs and off-balance catches, while running as fast as anyone in the league. His defender on the night was Andrew Moore, who is likely the fastest player on the Spiders’ roster. McDougall is recovering from an injury earlier in the season, but it seems like he’s back to full speed. Every disc thrown to McDougall was a battle. That McDougall won the majority of the fights was a testament to his throwers’ precision.

Despite the incredible defensive effort, McDougall was unstoppable all night. He finished with three assists, six goals, and one D. When the offense turned the disc, he was integral in reclaiming possession. Even his bobbles were magic.