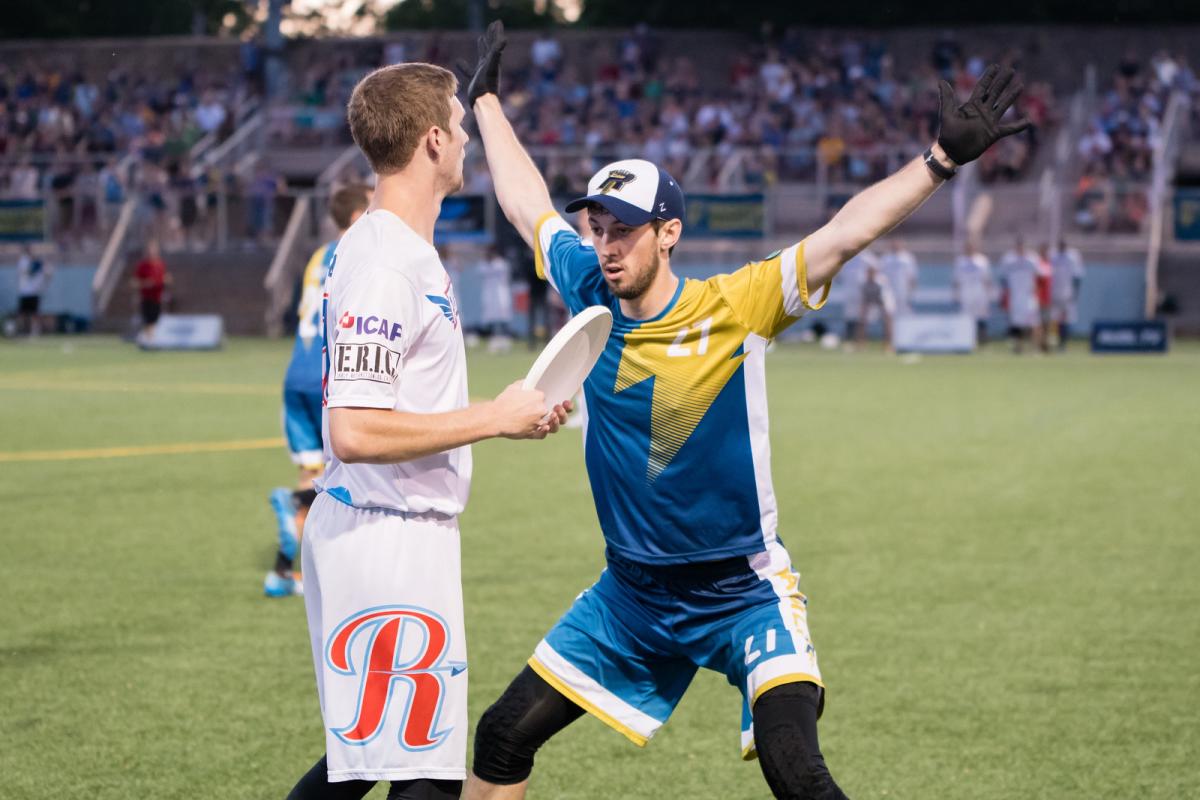 That was not the game that I expected. Though the Raleigh Flyers clearly have the potential to play at a championship level, this was the most impressive single-game showing of the season aside from the Toronto Rush's dismantling of the reigning champion San Francisco FlameThrowers in Week 4. Everyone on the Flyers was clicking this past Saturday, and Head Coach Mike DeNardis has done a brilliant job of blending the superstars into the system. The league is hereby on notice.

The Madison Radicals, on the other hand, are left with a lot questions following their first loss of the season. It seemed at times that they simply didn’t have the weapons to compete with Raleigh. After falling down 3-12 towards the end of the first half, Madison was able to win the rest of the game with a score of 13-12. Is that any solace? I doubt it. Madison’s stars were ineffective, and their depth was out-muscled by Raleigh’s. They can only stay the course and try to identify where they went wrong.

If the second half were to be a consolation prize for the Radicals, they have to be pleased with some of the individual matchups from their defensive line. Of course, players were beaten all night long, but a few successes were notable. One example: Kevin Pettit-Scantling began the fourth quarter with an athletic chasedown block on Mischa Freystaetter, making up steps with the disc in the air and easily beating Freystaetter to the disc. That Pettit-Scantling matched up, often after switches, against Freystaetter, Jack Williams, and Jonathan Nethercutt at times in the game was impressive, but he needed to win practically every matchup in order for Madison to have a chance.

Jonathan Nethercutt is one of the best of all time at combining range with accuracy. His flick huck is devastating, particularly when combined with the blazing speed of his cutting core. The 2017 MVP has had a relatively quiet season, playing in fewer games and appearing less integral to the Flyer’s offence in 2018. Don’t be deceived. Flyers Coach David Allison will shift Nethercutt into the stack to use his talents as a continuation weapon, or DeNardis will pilfer Nethercutt for a defensive point to make sure that the team can maximize its conversion chances after a turn. That Nethercutt isn’t the lead handler on every possession is a testament to his skill and versatility, but when Nethercutt did control the offensive flow against Madison, he was devastating.

Nethercutt made an impression with his tight-space throws as well. His hammers are things of beauty, and the mind-games between Nethercutt and Madison defenders were brilliant. Madison’s defenders will give cutters on the break side more space than many teams allow, hoping to entice a throw over the defence, trusting that their athleticism will win the day. Nethercutt threw an incredible hammer with his eyes locked on his defenders’, rather than his receivers’, waiting for that last fatal inch of space. Madison was buried in its own trap by Nethercutt’s pinpoint accuracy.

Madison’s zone was unable to make an impact. As they did against Chicago the week before, Madison began the game in person defence for most of the first quarter. The idea was to tire the offence, making sure their opponents worked hard to score. Zone looks in the early second quarter would thus force the tired opposing offence into countless turnovers. This worked against Chicago, but Raleigh was completely unfazed.

When Madison did shift to its zone defence, Bob Liu in particular thrived. He’s so fast that he can always be open as a reset, seemingly at will. On multiple points, Liu tore through Madison’s zone practically on his own, dishing quick passes on the move and receiving the disc fractions of a moment later, only to turn and fire the disc in the opposing direction. Liu’s major stats (2 assists, 1 goal) may not stand out, but the handler threw 62 completions and 0 turnovers. Liu has to be at the top of any list when discussing how Raleigh so thoroughly dismantled Madison.

Raleigh’s zone, on the other hand, was stellar. I expected Raleigh to play person defence, trying to speed the game up; furthermore, wouldn’t Madison’s offence be particularly adept at beating a zone defence? I was wrong. Raleigh was terrific at forcing Madison into huge numbers of throws on offensive possessions. Madison holstered a number of shots on the first point of the game, and eventually Tarik Akyuz was credited with a throwaway after a miscommunication.

The second point of the game featured another Raleigh zone, and Madison decided to take its shot. Graffy threw a lofting backhand huck, but Shane Sisco chased it down and cleanly blocked it.

Even though Madison’s offensive flow looked much better the third and fourth times Raleigh rolled out its zone, defenders were still close to block opportunities. Raleigh didn’t use a person defence until the score was already 4-2, towards the end of the first quarter. Dave Wiseman far overthrew Pat Shriwise with a huck, and Raleigh took the disc. Madison tried its zone after a timeout, but Liu threw five passes on the point, and diced up the zone with his cuts, en route to another Flyers break.

Raleigh’s defenders, especially downfield, were impenetrable. Hunter Taylor, David Richardson, Johnnie Lynch, and others were terrors, able to keep up with multiple cuts from Madison deep threats. When Nethercutt and Freystaetter played defence, they were terrific at clogging cutting lanes. Not only did Raleigh’s cutting defenders discourage Madison from throwing most deep threats, but they were able to disrupt most shots that Madison did take. Richardson won a number of battles in the air, collecting three blocks on the night. At 6’3”, Richardson has the size to match nearly anyone on the Radicals’ offence, and he surprised Madison on a number of plays, intercepting discs that Rads were certain were theirs.

7. The Best Defense Is A Good Offense

Raleigh’s skill on the offensive end blunted one of Madison’s most pointed defensive tools. Madison forces a large number of turnovers by double-teaming hapless cutters on the sideline, forcing them to choose between forcing a prayer into Peter Graffy downfield and trying to throw a reset pass around Andrew Meshnick and Matt Weber.

Raleigh was able to handle those double-teams every time. Freystaetter in particular was adept at throwing perfect hammers over the double teams to reset options in the middle of the field. Freystaetter – at 6’7” – is one of the only players in the league who can comfortably see over the outstretched hands of Meshnick and Weber, and his hammers are unblockable.

8. Madison Could Not Generate Turnovers

Partially because Raleigh was so ready for Madison’s defensive tricks, the Radicals were only able to collect six blocks in the game. Seth Meyer was the only defensive player who tallied more than one block. Meshnick was held to zero; he alone had eight in a single game earlier this season!

Raleigh only threw three unforced turnovers, beyond those six blocks. They had zero drops. When any team keeps their turnovers in the single digits, they’re going to dominate a game. Raleigh’s offence was impeccable and a joy to watch. Every cut, every pass, was on-time and on-target, and Madison was helpless. Raleigh’s first two offensive points required 21 and 33 passes respectively. In fact, Raleigh’s offence didn’t commit a turnover until the end of the first half, when Noah Saul threw a turnover that Madison converted for a break goal. Saul was otherwise perfect on the day, throwing three assists and catching three goals. The game was already over by the time he threw that turnover, with a score of 12-5 in favour of Raleigh.

A few weapons were operational for Madison, especially in the second half. One was Scott Richgels. Richgels measures a solid 6’7” of his own, and he caught several hucks over double and even triple coverages. Richgels caught four goals and threw two assists; on a night in which the Radicals had to be questioning their offensive ability when matched up against a hyper-athletic defence, Richgels at least proved that he can’t be contained.

Another positive note on the night for the Rads was Colin Camp. Against the Flyers zone looks, Camp – usually a deep cutter – was quite effective in tight spaces. His fast-breaking ability was dynamic, and on a few points he even functioned as an every-other handler at the end of the first half. Camp is one of the most athletic players on Madison, and he’s never been shy with his throws, either. Camp made a few glaring drops, but inexplicable mistakes were common to everyone in a Madison jersey; Camp had an otherwise impressive game.

The results of this game had significant playoff implications. Madison, with little-to-no precedent, is not the leader of the Midwest Division halfway through their season. With Madison (6-1) adding a loss to their record, the Indianapolis AlleyCats (7-1) hold pole position. The Cats haven’t been to the playoffs since 2014.

In the South, Raleigh’s win gave them some breathing room in second-place. Dallas (5-1) seems to have a solid hold on first-place, especially as they won’t play Raleigh again in the regular season. Raleigh (6-3) is 2 games ahead of Atlanta and 2.5 games ahead of Austin.