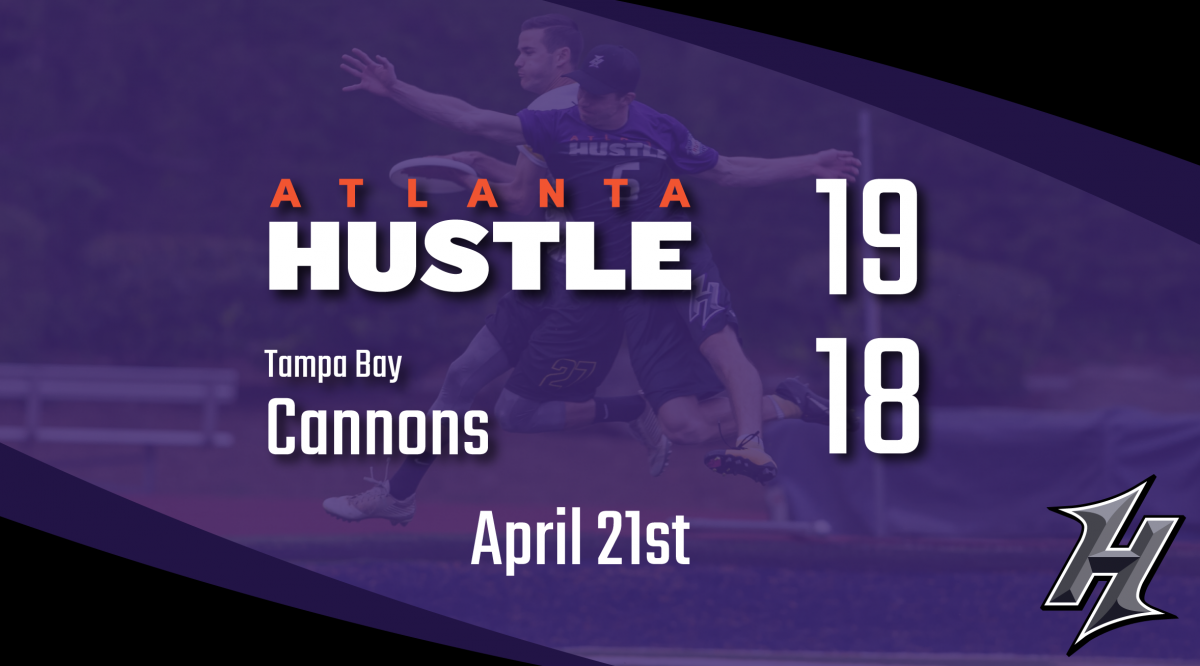 The Cannons came into this game in a big hole. Their chances for the playoffs were growing long. They desperately needed a win to keep pace in the South. They were looking to add a few key players to their roster who were not available in Week 2 when the Hustle traveled to Tampa Bay and snatched a victory with a furious four quarter comeback. The Hustle on the other hand were dealing with a series of injuries. UGA player and Hustle Rookie Hunter Cutts who scored 3G against the Cannons broke his leg at college sectionals. Veteran Trenton Spinks was a late scratch with a knee injury. Cutter Karl Ekwurtzel was sidelined with a toe injury.  Parker Bray, Matt Smith, and a few others were nursing early season wounds. With a bye looming in Week 5 the Hustle were thirsting to open the season at home with a win and put the Cannons yet another game back in the playoff race giving them some room to breathe on their week off.

It was a beautiful, windless spring night. Usually that is good news for an ultimate team but the Hustle utilize gritty zone defenses that thrive in harsh conditions. The Atlanta offense came out hot on the first point and stayed hot through the first quarter. Austin Taylor and Parker Bray were putting discs on a shelf for receivers to run onto. The handlers were throwing and going into power position and there was plenty of open deep space to attack. Atlanta strung together 8 straight holds without giving up the disc once. Even without the aid of any wind the Hustle defenders were able to wear down the patience of the Cannons handlers and force some throwaways, which they promptly converted for 2 breaks. The quarter ended 6-3 Hustle on top.

Tampa Bay regrouped during the break and settled into an offensive rhythm allowing them to keep pace. The teams traded 9 points to a score of 10-8. The next point proved to be a dramatic rollercoaster with layout blocks, fouls, and injury substitutions. The Cannons were able to survive with their first break of the game late in the quarter.

Tampa called timeout following that score and came out of it with a roller pull, trapping Atlanta on the sideline. The Hustle offense were able to avoid another slip by beating the double team at the last possible second and then racing down the field on a fastbreak. Double team sideline traps like that are a calculated risk. If the offense gets out of the double team your defense is out of position and out numbered to stop their flow . The quick ATL score gave TB one last chance for a buzzer beater before half. Atlanta's bigs - "Big" Mike Tillotson, Devon Rogers, and Sam Gainer - swatted it away and the Cannons almost pulled in the rebound, bringing back flashbacks of a similar situation in Week 2 when the Cannons did miraculously come down with a tipped pass for a last second score.

Starting on offense the Hustle appeared back in control, coolly working it down to the redzone. Nathan Vickroy managed to bait a throw in the endzone that he swatted away. The Cannons struggled to get the disc in play and coach Roca had to burn a timeout to save possession. Out of the timeout the Hustle kept the Cannons pinned in their own endzone for almost 4 minutes! That is unheard of. But, it was fruitless as TB eventually hit an outlet pass and later a risky cross field hammer for a break. Those are the points where you tell the players coming off the field that it was a moral victory even if the other team scored. However, it was a bigger win for the Cannons who brought it to within one, 11-10 Atlanta.

Atlanta and TB would trade out the rest of the third to a score or 15-14. Josh Turner had an emphatic grab pulling down a floaty huck for a score and energizing the crowd.

The third quarter produced no break chances for the Hustle defense but they were gifted one to start the fourth quarter. Atlanta used a timeout to sub in fresh legs for this important opportunity. A drop on a simple in cut deflated the crowd but they were back up on their feet one throw later when Josh Bush picked an off-target Ley forehand blade. Atlanta would make the most of their second chance punching it in to extend the lead back to 2, 16-14.

The Cannons are known to be fierce competitors and they were not going to lay down now. Their offense got a hold and then their defense took advantage of a Hustle overthrown huck to break back and tie the game at 16.

Atlanta swung back with a hold and break of their own. Another Ley blade found the turf. Atlanta tapped its last timeout to sub and collect themselves. Sam Gainer hit Big Mike on a long pass into the red zone. Christian Olsen appeared to make a difficult grab for the score but was called out. Tampa Bay, again, looked to attak quickly and the Atlanta defense was there to deny them. After a few swings Josh Bush found Matt Smith streaking deep for a clutch score. 18-16.

Atlanta almost made it back to back breaks thanks to this sensational play by Kelvin Williams.

Tampa Bay scored their next offensive point but they had to chew up a lot of clock to do so. Atlanta would receive up one with 25 seconds left in the game. The Cannons staff decided to gamble on the roller pull / sideline trap stragegy one more time.

And, this time it worked. An off target hammer hit the ground and the Cannons took possession, calling their final timeout.

Coming out of the break TB had 60 yards to go to tie the game. Atlanta defenders did a good job of containing their progress by keeping the disc in front of them. The Cannons eventually boomed a low huck at the buzzer. Kelvin Williams gobbled it up to seal the win for Atlanta.

Atlanta came into this season in better shape than any previous AUDL season and Coach Knowles' subbing system spreads minutes around the deep Hustle roster. Alternatively, the Cannons have a tight rotation. They had 9 players with over 20 points played in this game. Atlanta had just 1. This commitment to depth has allowed the Hustle to play more disciplined later into games and put faith in her system. With three wins by 4 total goals, one or two more miscues could paint an entirely different picture for the Hustle season. But, good teams win close games. Atlanta has proven they can do that.

The Hustle are looking forward to testing their mettle versus a new South opponent. They will host the Austin Sol on May 5th. This will be their first game against one of the teams in the thick of the playoff race. With a two game series against the Sol  this year, holding serve with a win at home is critical. In 2016 the Hustle made the playoffs because they split the series with the Sol and held a one goal point differential advantage. The South is THAT tough. Don't. Miss. This. Game.