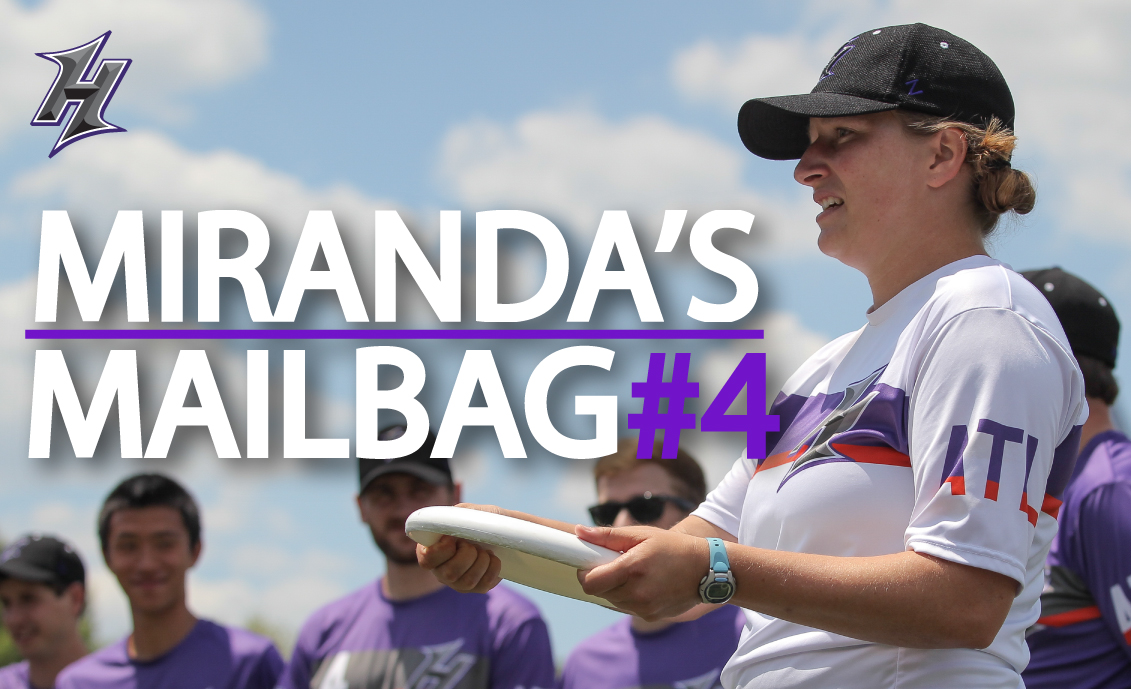 Coach Knowles, Can you reflect on the home stretch of the #HustleTwenty18 season?

We had our opportunities to make the playoffs, but couldn’t convert down the line.  Things fell our way to lock in a spot in our last game in Tampa Bay but the Cannons are a tough team. Then in Raleigh, during the AUDL Game of the Week, we couldn’t capitalize on a final chance.  That being said, we were still building up to who we’ve become so I’m not upset...but I hate hate hate losing. And while I would’ve liked to be in the playoffs, I think there was a low chance we that we were ready to upset one of the higher seeded South teams. Watch out for us next season.

You are the coach of Atlanta Chain Lightning as well. How has the transition been and how is Chain doing this season?

I was pleasantly surprised during our strategy committee meeting right after the Hustle season to hear from the athletes that they were feeling almost no burnout. They had enjoyed the Hustle season, had committed to it well, but hadn’t fatigued of ultimate, the training or their teammates (or their coach!).  Instead, the Hustle season preceding the Chain season gave us a chance to integrate and improve many new, young players so they would be prepared for big-game moments at the Elite-Select Challenge, Sectionals and Regionals. Everyone on Chain plays in every game - maybe not as much as they played in every Hustle game - and they are each ready to make the most of those points. 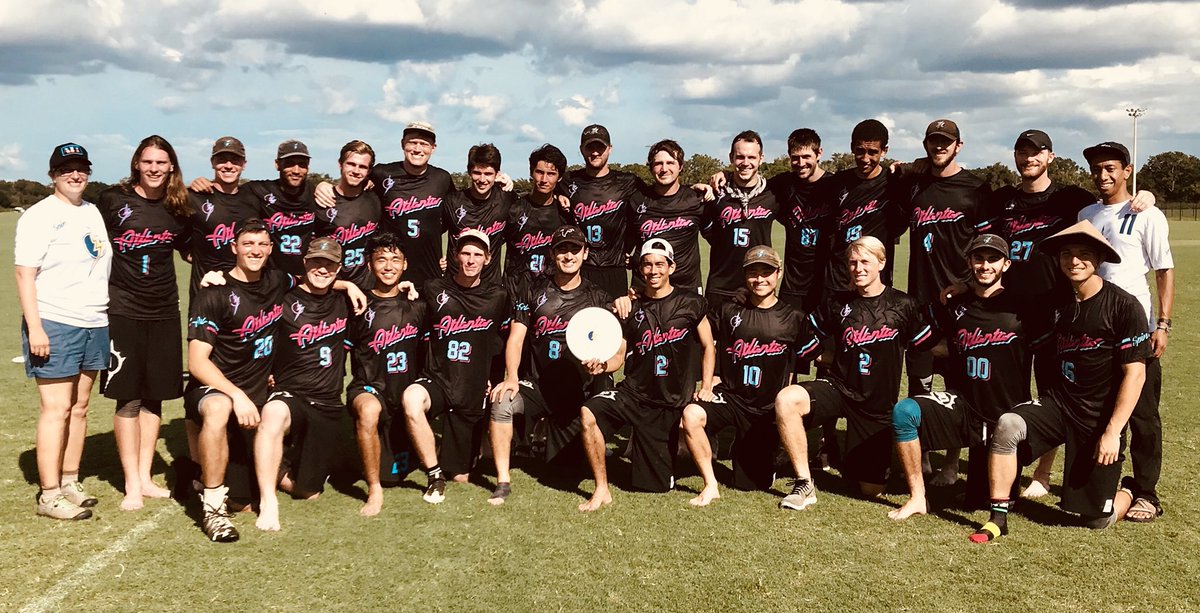 Chain is returning to Club Nationals for the first time since 2014. We didn’t have to compete with a united Florida team, but we did earn a bid for our region and then took it when the time came.  21 of Chain’s players have never been to nationals. We have 10 rookies and the average player is 23 years old. Many of them are challenged by the financial demands of flying to the west coast and paying a $100 player fee. We are raising funds to get as many of them there as we can and I couldn’t be more excited to join them on that first journey. If you want to pitch in you can do so here.

The AUDL broke big news on a variety of topics Monday….

One of the Hustle’s owner’s, Steve Hall, has been freshly minted as the new AUDL commissioner, leaving team responsibilities to John Boezi. What has it been like to work with Steve and how do you feel about John leading Atlanta now?

It’s been great to be able to work with Steve Hall over the last two years of his Hustle ownership - he asks a lot of questions and knows the value of listening, particularly to the female-identifying movers and shakers in Atlanta.  He has been a valuable sounding board for the Atlanta Soul and I believe that relationship at least partially influenced the AUDL’s commitment to researching and developing a women’s league in the not-so-distant future. He is learning how to be a very effective male ally for women and people of color as we all seek to make equitable opportunities a reality.

Of course, I am also very excited for John Boezi to re-emerge as the managing owner of the Atlanta Hustle with support from Albert Banks, Richard Whitcomb, and Steve.  He has a very clear vision of the positive change that is possible in our community through our work with the Atlanta Hustle.  He and I work very well together and are a force to be reckoned with when we combine on any task. He supports me and my on-field vision wholeheartedly and does everything he can to make all off-field operations smooth. There is so much that needs to be done to steer a business like this effectively. John has shown in the past that he is good at it but I know he would welcome help from other individuals in the Atlanta community that might want to get involved in the business of growing ultimate. I’m also really looking forward to the league’s commitment to increase marketing help for teams so that we can get more people from different walks of life to see our games next year.

Starting in the 2019 season the AUDL will host its first All-Star game.

While ultimate is a team sport and the Hustle plays a hyper-team-focused style of offense and defense, it is always nice for deserving players (and coaches) to get individual recognition. I believe an all-star weekend will be a chance for the best in the league to showcase their talents and for fans across the country to get to know our stars more personally.  I hope that each team gets the chance to be represented to the fans on a national stage.

An all-star weekend would also be an opportunity for the best AUDL players to meet each other and get to know one another.  This would be a perfect opportunity for male allies to join forces in what they can do to promote gender equity through AUDL ultimate across the country or for white athletes to consider their privilege and how to share their resulting power.  Of course I want to watch the game, but I also hope there will be programming for these athletes to help elevate our sport with their voices too.

While we’re on the topic, we can also have a women’s all-star weekend!

The AUDL will create a steering committee tasked with generating a plan to launch a women’s league as soon as 2020. What does this news mean to you?

I mean, this is the news we’ve all been waiting for!  Women’s pro teams started last year and played some games, but truly wanted a league, something that mattered.  None of the owners of women’s teams had the time or effort to build a league with all the logistics and operations that come with it...and that is what the AUDL is offering!  An experienced league entity wanting to help build a league solely for female-identifying athletes. I mean, hell yes! I think this is an amazing opportunity for all athletes to have access to the visibility and low-cost playing opportunity that is possible through professional ultimate. Last year, for better or for worse, the boycott derailed all other conversations and every team and player had to think about gendered opportunities to play ultimate.  In the face of fear of a competing women’s league, the AUDL is stepping up and deciding to provide that opportunity. Whether this league is being created out of fear of competition, loss of support or genuine desire to work for positive change...it’s happening and for now, that’s better than the nothing that’s been happening for a long, long time. I hope this news can clear the way for parts of the ultimate community to come together and work towards a unified future for Ultimate.

Who do you think should be on the steering committee? Who are some good candidates for women’s commissioner?

There are too many great options to choose. I think women who have experience playing or coaching in the AUDL or women who are owners of teams would be great choices. Perhaps someone from the Eurostars leadership or one of the existing women's teams as well. It would also be beneficial to have voices from outside the league's circles. Either way, I encourage everyone who is passionate about this effort to get involved at some level and shape the future you want.

What steps do you want to see taken and reported by this steering committee in 2019?

There is so much to be decided but at this point, yet it’s all about the money.  Perhaps the first targets to own an ultimate team should be people who already own an ultimate team. Current ownership groups could be presented with a business plan for buying a sister team in their city illustrating the advantages. I also would like to see the AUDL provide the same resources in search of new ownership groups and sponsors.  It’s possible that a women’s league could attract new and different groups and businesses. While this is happening, the league could host a women’s championship weekend this year.  Even if there aren’t as many women’s teams or specific divisions, I think just crowning a champion would be a significant first step.

What would success in 2020 look like for an AUDL women's league?

We may not (probably should not) start a league with as many women’s teams as current open teams that exist. It could start the way the AUDL started, with fewer teams and divisions and then grow over time. Here are some things I would look for: