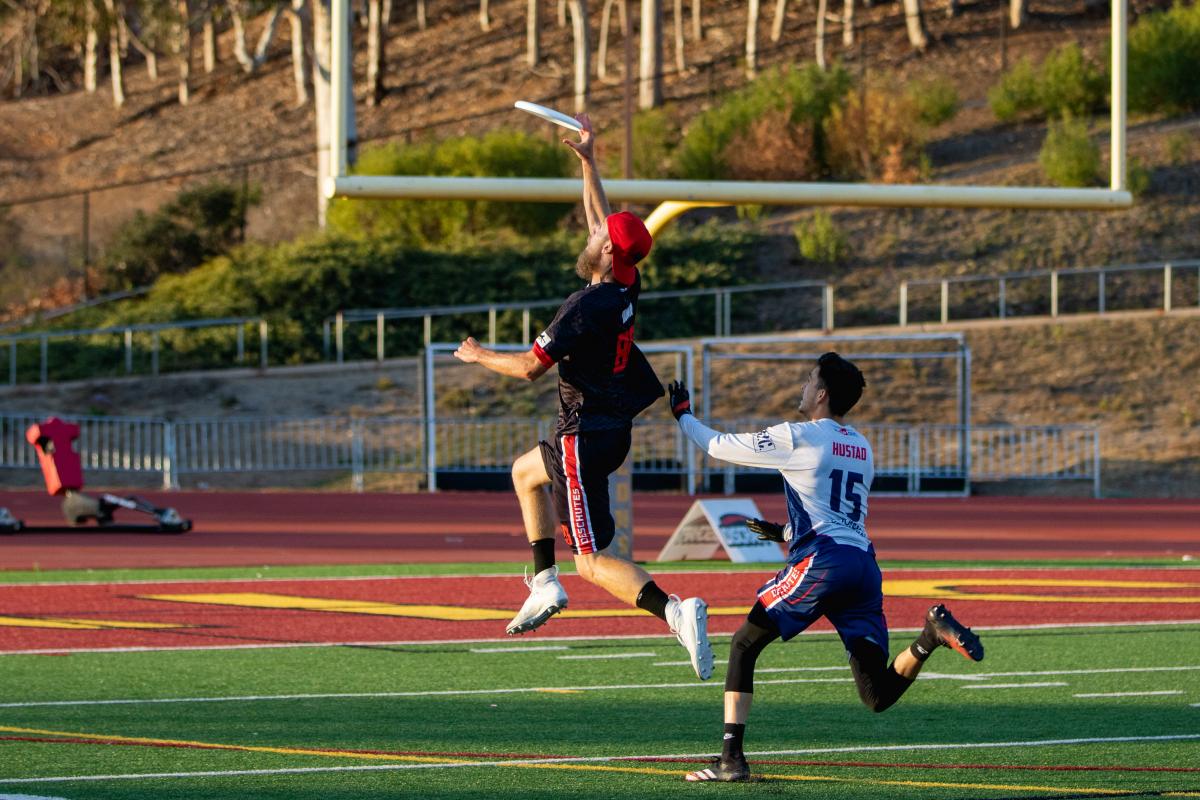 July 23, 2021 - San Diego traveled to Dallas for a potential West Divison Playoff preview, and a rematch which the Growlers won 21-20 at home on Jun 26. With temperatures in the mid 90s and a strong wind, conditions were tough and the teams prepared for a tight battle.

Dallas received the opening pull going downwind, and despite 2 turnovers, held after almost 3 minutes. San Diego's Tim Okita assisted to Nate Pettyjohn for the hold and the Roughnecks answered. After a hold from each team, a Growlers red zone miscue led to a Dallas upwind break 4-2. Lior Givol connected with Hunter Corbett for the upwind hold, and after a Dallas layout drop, San Diego worked the disc all the way to the goal line and called timeout. The offense was brought in, and Goose Helton found Travis Dunn for the break, 4-4. San Diego was able to force a throwaway, but couldn’t complete the upwind score before the buzzer.

San Diego began the second quarter with two throwaways and the Roughnecks capitalized by breaking upwind. On the next point, Helton assisted to Wes Groth for the upwind hold and both teams traded with the score knotted at 6s. Dallas then held after taking a timeout and catching a deflected disc on a crazy play. On the next possession, Jesse Cohen was trapped but threw a tight flick down the sideline to Helton for the score. After a Roughnecks hold, the Growlers were stalled, but a Scott Radlauer block prevented a score. San Diego called timeout but couldn’t score upwind before the half and trailed 8-7.

The Roughnecks held downwind, and after a couple turnovers, Dunn amazingly caught a Hunter Corbett backhand huck for the layout goal. After a couple Dallas turnovers, Dunn corralled a hammer then dished to Helton for the break, 9-9. The Roughnecks threw the disc away, the Growlers called timeout, and Dunn connected with Helton for the break, but Dallas responded with a hold. Each team held before Dallas earned a block, called timeout, and secured the break and lead after a long point, 12-11. To close the quarter, the Growlers were not able to convert at the buzzer despite opposing players appearing to have possession of the disc at the same time.

To start the fourth quarter, San Diego barely overthrew a deep look, and Dallas worked the disc for the upwind break, 13-11. After another San Diego throwaway, Dallas used a timeout and converted the break for a big 14-11 lead. The Growlers struck back, but the Roughnecks responded with a hold to lead 15-12 with 6:39 remaining. Helton assisted to Pettyjohn for a hold, but Dallas was patient and scored. Needing quick scores now, Okita threw a pinpoint flick dime to Helton, but the Roughnecks kept coming down with 50/50 discs and held the lead 17-14. Lior Givol found Jesse Cohen late in the game, but Dallas once again answered and broke for the 19-15 win.

The Growlers were led by Goose Helton (4 assists, 4 goals, 1 block) and Travis Dunn (3 assists and 3 goals) with +4 performances.  The team traveled to Austin on Saturday to regroup as they face a young and enthuthiastic Sol squad on the second day of this sweltering Texas two-step road trip.