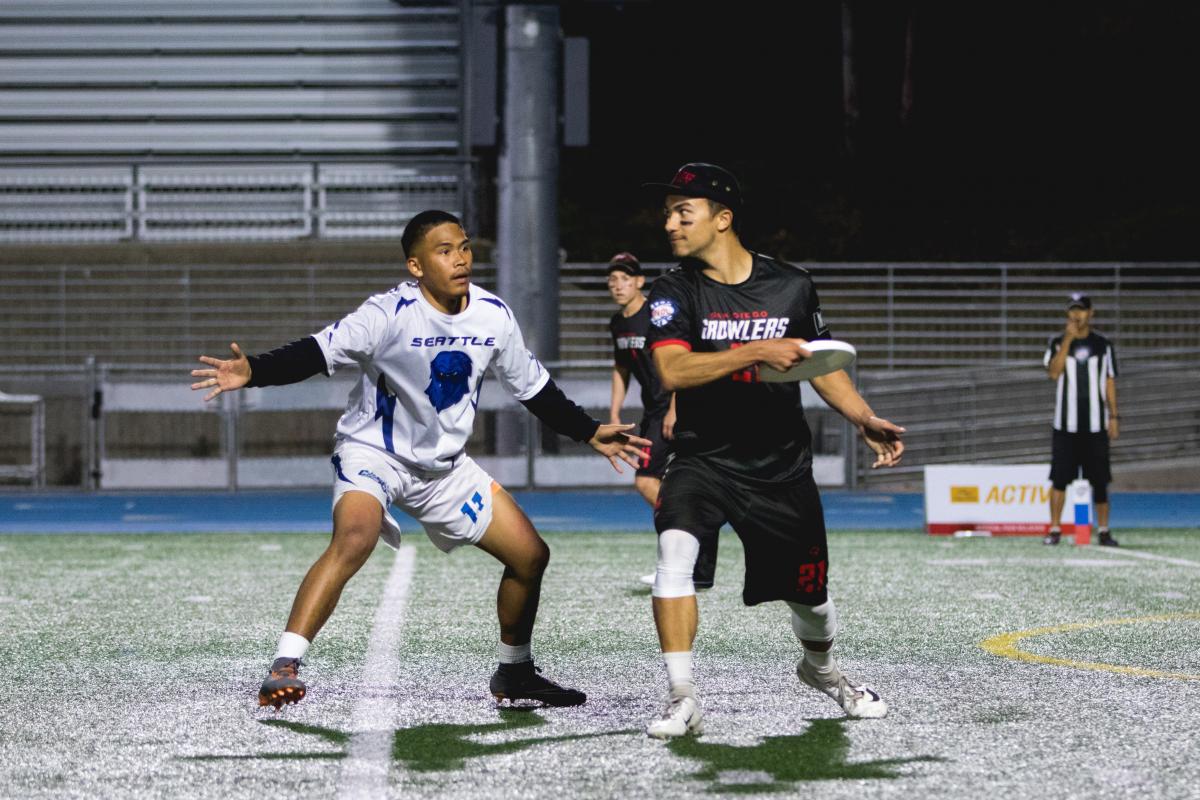 With a win over the Seattle Cascades, the San Diego Growlers would clinch the AUDL West Division regular season title and secure a home playoff game.  San Diego got off to a good start with a Will Turner defensive block, which led to a Max Hume goal for an early break.  The teams traded offensive points until the Cascades cashed in on their first break point of the game to go ahead 3-2.  The Growlers and Cascades went back and forth for the rest of the quarter trading holds, with Steven Milardovich and Sean Ham collecting two goals each, 7-7.

San Diego punched in a hold to start the second quarter and Trevor Purdy recorded a bookend defensive block and a skying catch for the break score, 9-7.  With very little wind present, the offenses ran smoothly until the Cascades capitalized on back to back Growlers’ miscues and took the lead 13-12.  But with 12 seconds left, Jonathan Helton fired a long flick down the field to Purdy who used his 6’6’’ frame to corral the buzzer-beating score, 13 all.

The Growlers refocused during halftime and came back on the field hungry with two breaks scores in row, 15-13.  The teams traded and Seattle was able to get a break back to tie the game.  More trading ensued, and the Cascades struck last as they were able to execute a buzzer-beater of their own, 18-18.

Just like the previous three quarters of play, San Diego scored first with a hold on offense.  Seattle tied the game, then Tim Okita threw a smooth backhand on a rope to a sprinting Jesse Cohen for the goal.  The back and forth contest continued until the Cascades earned a block then converted to take the lead, 22-21.  The Growlers got back on track with several holds, but the Cascades also kept scoring. Tied at 24s, Scott Radlauer dialed in the launch codes for a massive layout interception and eventually scored the bookend break to take the lead with only 1:32 remaining.  After Seattle leveled the game with 30 seconds left, San Diego worked the disc downfield with quick handler movement.  After Helton caught an upline pass with momentum at the 22 yard line, he released a cross-field hammer throw with 1 second on the clock, and Milardovich was able to beat his defender in the air for yet another buzzer-beater score and the 26-25 win!!!

Steven Milardovich (5 assists, 6 goals) and Jesse Cohen (5 assists, 4 goals) led the Growlers with +9 games, and Trevor Purdy contributed 2 assists, 3 goals, and 1 defensive block.  San Diego (9-2) clinched their first ever AUDL West Division regular season title and has one game left at San Jose this Saturday.  On July 20, the Growlers will host the Los Angeles Aviators in the West Division playoff game to determine who will earn a spot at Championship weekend!